As Mythological Figures winds down to its end and the votes are tallied up, the subject that’s clearly broken away into first place is that vampire hunter of olde: Van Helsing! 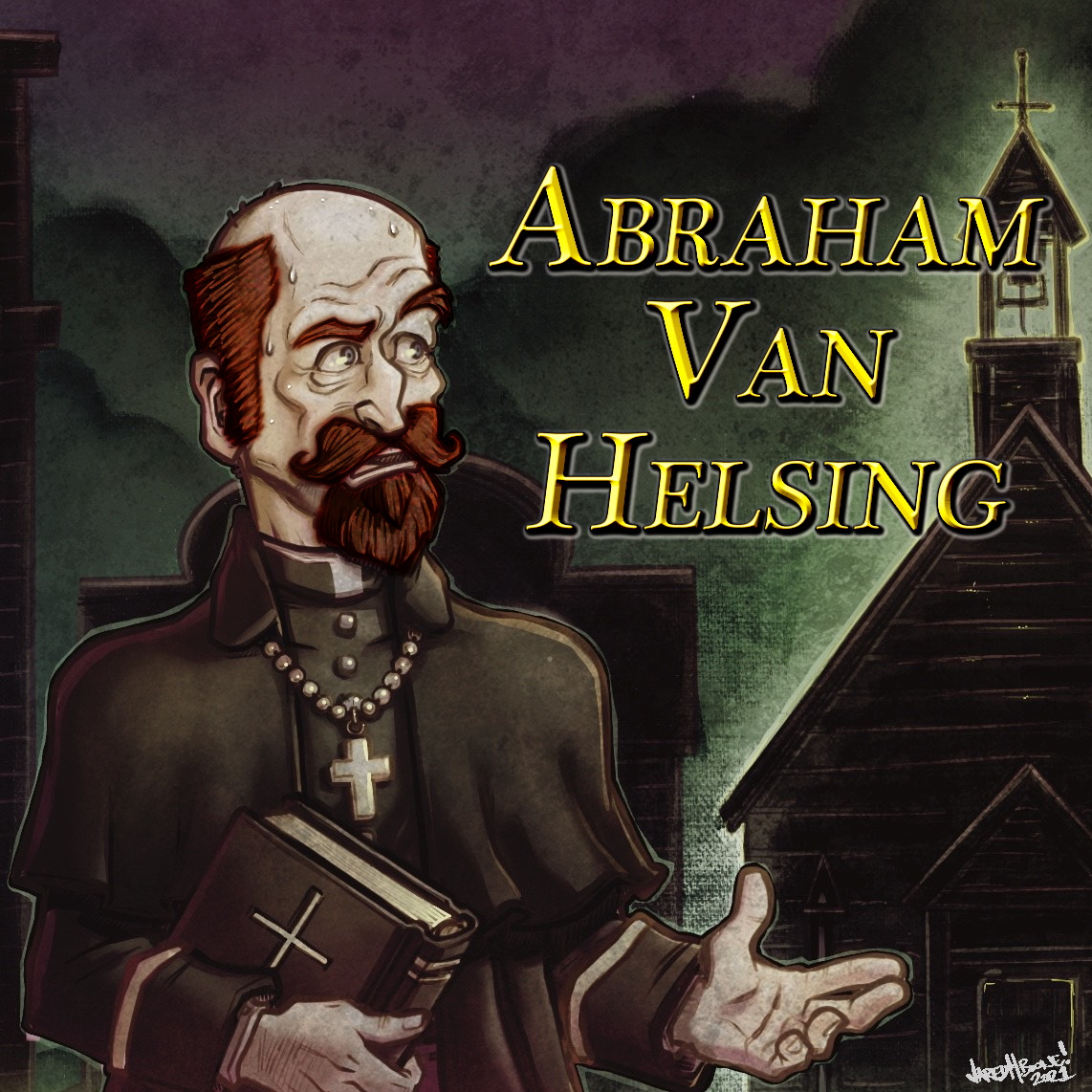 In Bram Stoker’s Dracula there’s one man who really knows what’s going on—the experienced, well-educated, highly skilled doctor and all-around genius Professor Abraham Van Helsing. Called to the situation by his friend John Seward, the dutchman quickly realizes what the count truly is and the threat the vampire poses, often taking action against the undead with the now iconic tools of the trade (garlic, blessed bread, crucifixes, wooden stakes, and the like). He may be based on Dr. Martin Hesselius from the novel Carmilla (a work about vampirism predating Dracula by over two decades), but which particular scientist Stoker was thinking about while writing him is unknown. In any event he does a great deal of the grislier work in the adventure, and though he is nearly overtaken by the supernatural charms of a vampire near the end he ultimately survives, helps slay Dracula, and later on becomes a sort of grandfather to Quincey Harker (the son of the protagonists John and Mina Harker).

Design Notes: While the illustration here may look like a priest, the only religious distinction about Van Helsing in Dracula is that he’s a catholic and pretty much everyone else is protestant. If you tuned in hoping to see cleric levels, I am sorry to disappoint. Shoehorning in Medicine while getting all the other things Abraham here ought to have would’ve meant a power jump to cover as much of the character’s spread, so in a rare act of cookery we are swapping the Sage background’s Arcana proficiency for Medicine. | gasps | Otherwise with some rogue levels to start out (netting the most skills oddly enough) and a bit of ranger for that very obvious Favored Enemy bit, the rest of Van Helsing’s character sheet is artificer levels—though just the two so he doesn’t get too wild. In the end we’ve got a polymath well-suited to help a part fight Dracula, although probably not the Hollywood version (you’ll need the Hollywood Helsing for that). Let’s do the numbers! With that Cunning Action and hiding every round Van Helsing’s got a higher AC and attack bonus than it says on the tin, both of which are saving his proverbial bottom (because his hit points and damage are still real low). The DMG and Blog of Holding land very nearly in agreement around halfway past 6 which is rather wild for only 5 class levels, so we'll dial that back down to CR 5 (edit: he is a wimp who isn't good at hiding even if he can do it quickly; let's dial it further down to CR 3).

Background - Sage: Researcher. Acumen or fate gently nudges Van Helsing toward the answers to his questions. When he fails to recollect or discover more about a subject of lore, he knows where or who can give him that information (usually from an athenaeum, library, institute of higher learning, another scholar, or mystical creature). The lengths to which he must go to acquire this information and the feasibility of doing so are entirely at the GM’s discretion.

Cunning Action (1/Turn). Van Helsing can use a bonus action to take the Dash, Disengage, or Hide action.

Imbued Items. At the end of a long rest Van Helsing can touch up to 2 nonmagical objects, turning them into magical objects containing one of the following abilities. If it requires attunement, Van Helsing is automatically attuned to it unless he decides otherwise. The object retains this ability indefinitely or for 5 days following his death. When Van Helsing imbues a third item, the effect ends on the oldest use of this feature.

Improved Defense: A creature’s AC increases by 1 while wearing this item. [Active]​
Improved Weaponry: A creature gains a +1 bonus to attack and damage rolls made with this weapon.​
Mechanical Enchantment: The item duplicates the effects of eyes of the eagle.​
Mechanical Enhancement: The item duplicates the effects of a periapt of wound closure. [Active]​
Favored Enemy: Undead. Van Helsing has advantage on Wisdom (Survival) checks to track undead, as well as on Intelligence checks to recall information about them.

Minor Inventions. Van Helsing uses an action to touch a Tiny nonmagical object, working on it with his tinker’s tools or other artisan’s tools. It gains one of the following properties until he spends an action touching it to end the effect:
Van Helsing can affect up to 5 objects at the same time, ending the effect on the oldest use of this feature when he exceeds his maximum.


Natural Explorer: Mountains. When Van Helsing makes an Intelligence or Wisdom check related to mountains, his proficiency bonus is doubled if he is using a skill that he’s proficient in. While traveling for an hour or more in his favored terrain, Van Helsing gains the following benefits:

Spellcasting. Van Helsing is a 1st level spellcaster that uses Intelligence as his spellcasting ability (spell save DC 14; +6 to hit with spell attacks). He requires a set of tools he’s proficient with to use this feature or one of his imbued items. Van Helsing has the following spells prepared from the artificer’s spell list:

Cool build as always - thank you for sharing. Now for the question(s):

dave2008 said:
Cool build as always - thank you for sharing. Now for the question(s):

1. You know I had him at 7 originally (4 artificer, with the alchemist archetype and the Healer feat) but it just wasn't necessary—took the build further astray from the original character than what we were going to get out of it.
2. Added! The revolver wasn't for Dracula, so I've read, but other, lesser threats.
3. I didn't think he needed it. Holy water is kind of a PITA to look up and stuff so aye, added that in, but pointy stick is I think a bottom rung on the design ladder so skip.

CR 5 creature? With 14 AC and 33 hp? And a single attack for puny damage? Also, hiding each round with with a Stealth modifier of +2?
Are you sure you haven't bungled up the CR? Because will go down like a chump against a 3rd, maybe even a 2nd-level party, to say nothing of a run-of-the-mill vampire spawn.

It's an intresting build...not what I would do, but not bad at all. I want to compair this to 'not vanhelsing' Van Richten in the curse of strahd book.

Mike Myler said:
2. Added! The revolver wasn't for Dracula, so I've read, but other, lesser threats.
Click to expand...

"The branch of wild rose on his coffin keep him that the move not from it, a sacred bullet fired into the coffin kill him so that he be true dead, and as for the stake through him, we know already of its peace, or the cut off head that giveth rest." - Van Helsing - Dracula Chapter 18

Edit - I've gone off the Dracula deep end of late as I've been running the Dracula Dossier. I like your build quite a bit, it covers a lot of the ground Van Helsing actually does in the book. His Artificer stuff is easily his vampire hunting bag it's a good idea. I have no idea what a sacred bullet actually is, in the Dracula Dossier its a silver bullet inscribed in Hebrew Psalm 91:5 "Thou shalt not be afraid for the terror by night / Nor for the pestilence that walks in darkness."