No WotC At Gen Con This Year?

It looks like Wizards of the Coast will not be attending Gen Con this year. They've just posted a list of the conventions they'll be attending in 2016, and noted their intention to support conventions that they don't normally get to attend. "Gen Con is not on this list because we are changing things up to support more conventions and locations. Even though the Dungeons & Dragons team won’t be there we know our friends at Baldman Games will be hosting plenty of D&D adventures. It’s safe to say there will be ample opportunity to play Dungeons & Dragons during Gen Con. We’re excited to head to some new conventions this year and meet folks who don’t have the opportunity to travel to Indianapolis." 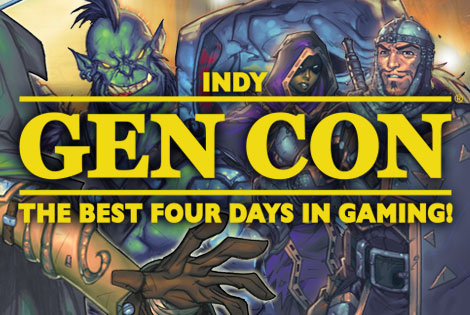 Chris Perkins will be hosting another Acquisitions Inc event at PAX East, and Origins will be the "D&D tabletop gaming event of the year" with sneak peeks and a return of the D&D Open. PAX Prime will have the highest concentration of D&D staff present.

Read more about their convention plans here.
Click to expand...

Heh... I was wondering how long it would take for someone to finally notice this. I saw it on Friday and thought "Oh man, this will send some people apoplectic", and figured someone would mention it at some point to send some folks into a tizzy. I considered making a post about it when I first saw it, but decided against deliberately setting up the stick for which to poke the bear. But now that the stick is out, I'm interested to see how many bears are going to be poked by it and how many "WotC is the demon company!" posts we're going to get since they are leaving GenCon to Baldman Games.

Looks like WotC is still courting the old school crowd.

I have a running debate with a friend of mine. He thinks 5e's simpler focus and the old school movement is coincidence. That the old school customer base isn't a market force compared to Pathfinder.

I disagree. IMO It's just so fragmented across so many companies and free products that's hard to track.

Does anyone know if Gen Con extremely expensive these days? I feel like the reason is that they just don't have any overhead to spend for the trip.

On a more serious note... I've got to think running or doing anything at GenCon probably costs more than most other conventions (if for the fees they charge if nothing else)... so taking that part of the budget and splitting it up over many more smaller conventions might make sense (for this year if nothing else.)

Say what you will about WotC, but this entire edition cycle has been about changing things up from how they've traditionally been done in the past... and not sending the staff to GenCon seems to follow that pattern. But like everything... they can go back and change things for the next year if they find their instincts took them astray.

This is unfortunate.
Other than Pax Prime, the conventions are effectively large local cons. They pull from a wide area but aren't likely to bring people together from across the county. You don't get nearly the number of people as GenCon.

I really don't get the abandonment of GenCon. Because it's the biggest it brings in so many different fans. Getting out to other cons is fine, but you don't ignore the best four days in gaming in the process....

Jester Canuck said:
I really don't get the abandonment of GenCon. Because it's the biggest it brings in so many different fans. Getting out to other cons is fine, but you don't ignore the best four days in gaming in the process....
Click to expand...


It's the only US-based one that non-American fans tend to be able to go to, too.

Actually, I take that back - the PAXes are bigger than Gen Con, I think. Lots of folks from around the world there, I should think.

Supporter
Jeremy Crawford will be at GenCon, even if none of the other Wizards people will be... (he posted that on Facebook).

Jester Canuck said:
This is unfortunate.
Other than Pax Prime, the conventions are effectively large local cons. They pull from a wide area but aren't likely to bring people together from across the county. You don't get nearly the number of people as GenCon.
Click to expand...


PAX East isn't really a local con at all and I wouldn't describe Origins that way as well but it's been ages since I went to one.

I suspect PAX is the more expensive con and also resource intensive with the majority of their staff there. As PAX Prime takes place in August as well, they will choose it over Gen Con likely to grow the hobby by stoking the interest of new potential players from PAX which has a higher attendance (not to mention the average attendee of PAX will have less baggage given edition wars and such that would be more prevailent with a Gen Con attendee). WotC was essentially not at Gen Con last year either.

I think it is a damn shame regardless though, that D&D has no official support at the biggest con in the industry. I understand the business side of it, but I do wish they would come out, even a small representation for a couple panels and a booth. I am not particularly interested in going to PAX. It is what it is however.
Last edited by a moderator: Jan 18, 2016

Morrus said:
It's the only US-based one that non-American fans tend to be able to go to, too.

Actually, I take that back - the PAXes are bigger than Gen Con, I think. Lots of folks from around the world there, I should think.
Click to expand...

Agreed. Even people from Canada are unlikely to venture down for anything smaller, unless it's right across the border and they have time to drive.


DevoutlyApathetic said:
PAX East isn't really a local con at all and I wouldn't describe Origins that way as well but it's been ages since I went to one.
Click to expand...

Clearly, since I was already singling out Pax Prime, I missed that Pax East was on the list. Yes, neither of those are local cons. They're also primarily video game conventions.

I thought this was settled last year when there was controversy about the rewards people didn't get from WotC at GenCon. Mearls was rather clear that WotC wasn't interested in GenCon anymore.

goldomark said:
I thought this was settled last year when there was controversy about the rewards people didn't get from WotC at GenCon. Mearls was rather clear that WotC wasn't interested in GenCon anymore.
Click to expand...

You are correct. The "big announcement" for GenCon last year (usually a storyline or product announcement) was that they were dramatically reducing support for GenCon.

WOTC has not been at Gen Con "Officially" for the past 3 years.. the past 2 you were hard pressed to even find a mention of them... So this is not shocking in the least bit.

Plus Mearls himself talked about LAST YEAR - http://www.thetomeshow.com/e/gencon-2015-mike-mearls-open-question-discussion-hour/

Not surprising; if you're working with a limited budget, Gen Con is EXTREMELY expensive. My wife and I regularly spend around $1500 on hotel for Wed-Mon, and WotC is putting up more than one couple in one room. That's to say nothing of how much it costs for the exhibition space (even though they don't have space in the Dealer Hall). Gen Con isn't just giving that space to WotC for free.

From a marketing standpoint, it also sort of makes sense. At Gen Con, they're liking reaching the same people over and over again. I would wager the amount of new people they really get is pretty small compared to the overall attendance. Going to more, smaller cons would increase their exposure more. At Gary Con, they're the largest company, followed by Kenzer & Co., then there are some small pub folk in the Dealer Hall (which is a tiny fraction the size of Gen Con's; seriously, all of Gary Con takes place in one hotel). At Gen Con, they're one company among thousands. Heck, the last year they actually had a presence in the Dealer Hall, I didn't even hang out at their booth; there were too many other things to do.

Also note that the Adventurers League will still be at Gen Con in force!

Morrus said:
Actually, I take that back - the PAXes are bigger than Gen Con, I think. Lots of folks from around the world there, I should think.
Click to expand...


PAX prime is about the same size as Gen Con, give or take a couple thousand people. PAX East is, I think, about half the size.

I think folks are focused too much on how many people are going, and instead consider *which* people are going. Consider - is there anyone so motivated as to go to GenCon that isn't already up on what WotC is doing? It isnt' really a big marketing opportunity if they aren't reaching new people - attending GenCon would be fan service, at best.

At more local cons, they may be better able to do outreach.

This is awesome, gives me a chance to try out Origins & Pax Prime, always wanted to check them out.

Given how much it costs to go to one con these days, Pax Prime would have to be the new target. It's the only con I'm considering saving up for these days, anyway.

Epic
Seem to be limiting themselves, with their staffing these days and the OGL, maybe it is best to let the 3rd parties do 5e at Gen Con. All WotC is these days is a project team, better to hear from those that are putting out product.