Perkins' Foreword From OUT OF THE ABYSS

WotC's Chris Perkins on the Alice in Wonderland themes of D&D 5th Edition's Rage of Demon's Out of the Abyss by Green Ronin Publishing. 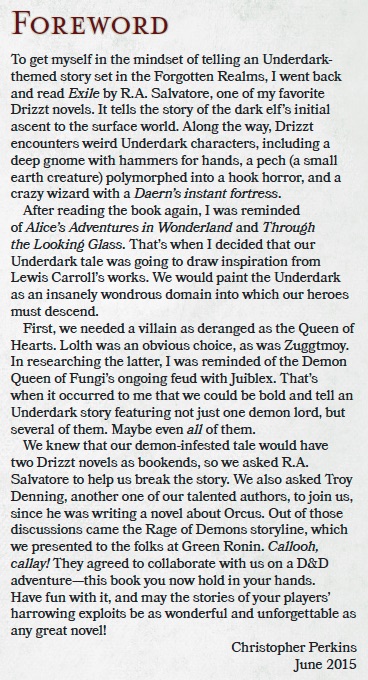 Yeah, really looking forward to this...

Man I wish my group could play more often so we could get to this quicker. Looks really good.

They got too much Drizzit on it for me. I'm tempted to pick it up to repurpose, but that Mary Sue juice is hard to wash off.

Hmmm. "A Red and Pleasant Land" riffed hard and well on the Alice in Wonderland theme several months ago. I'm excited for this adventure, but am already rolling my initiative for the moment Drizz't pops up. I kid, but I really do hope we see less than little of him in the story.

God said:
They got too much Drizzit on it for me.
Click to expand...

How much Drizzit do you think they got on it?

Yeah, he's in the novels and the video games, but he's just a background detail in the tabletop RPG.

Perkin's foreword to this adventure gets me that much more excited about getting my hands on it. Really looking forward to this.

I wish I could get excited about anything set in the Forgotten Realms as it's all we've been getting.

Loving 5e. I've home-brewed most of my stuff so far (with a handful of on-the-fly conversion of 1e AD&D modules). One of my fellow DMs ran Phandelver from the Basic Set, and that was fantastic.

Tyranny of Dragons did nothing for me. Never bought it. Just didn't grab me.

I almost bought in on Princes of the Apocalypse, but held back. Maybe I'll pick it up some day. Somehow I just don't feel like telling that story.

Rage of Demons sounds freaking GREAT! I'm really looking forward to this one and will buy Out of the Abyss day one at my FLGS.

guachi said:
I wish I could get excited about anything set in the Forgotten Realms as it's all we've been getting.

Out of curiosity whats your problem with it.

I'm not getting the "booo Faerun" train of thought. It's literally just a tiny bit of effort to change names of things to any setting ever made. That's seriously all that makes it specific to Faerun. Stop seeing it as Realms and done, and as I say often, make it yours.

It's also pretty straight-forward altering an encounter to be fitting for another setting. Princes of the Apocalypse can easily be put in Sigil. The nodes are now powerful doors to elemental planes, the heralds now radical faction members or a new upstart faction.

I've ran quite a few older edition adventures in other settings with minimal effort.

This sounds wonderful and inspired.

Morrus said:
How much Drizzit do you think they got on it?
Click to expand...

The only reason I'll look at this now is because Green Ronin is behind those two authors are bad enough alone: in combination, I dare not think of what garbage they're capable of emitting.

After reading Perkins' foreword, I want to plug the work of Michael Shea (deceased in 2014) which features a few stories with insane, weird visions of underworlds. From what I've played from Green Ronin, its likely the adventure is closer to Michael Shea than Lewis Carroll as well.

The books:
Nifft the Lean (1982), in particular the story "Come Then, Mortal. We Will Seek Her Soul". Nifft and sidekick take a journey into hell as errand boys.

Both books are available on Amazon for around $9 after shipping.

Not gonna lie, this sounds super lame. It sounds like they made a land of nightmare and dark into a land of children's stories. Read a Clive Barker novel, then write about the Abyss. Do not take your inspiration from a children's book. PG rated bs. Oh and more Legolas/Drizzt overpowered ubermench bs too. Gotta love that trash. I know, let's make him sparkle in the daylight. We have the feywild for faerie tales.

While I never got into the works of R.A. Salvatore and Troy Denning (is that D&D blasphemy?), and know next to nothing about Drizzt except he has a figurine of a cat or possibly a real cat with a name that sounds like Guinevere, I am a fan of Green Ronin and really appreciate Chris Perkins sharing a snippet of his design process with us.

Definitely will check it out when it releases September 15th!

Actually, this will be the first of their big story books for 5e that I consider purchasing.

Quickleaf said:
While I never got into the works of R.A. Salvatore and Troy Denning (is that D&D blasphemy?)(snip)
Click to expand...

No, it's evidence of supremely good taste. I tip my hat toward you.

So Troy is writting about Orcus. Interesting. I was sure his new novel, Throne of the Dead, would be about Myrkul's re-ascension. Now it seems we might instead see the return of Kiaranshalee, as she's heavily linked to Orcus