PM: Off the Edge of the Map (Fantasy Craft) (OPEN SPOTS!) 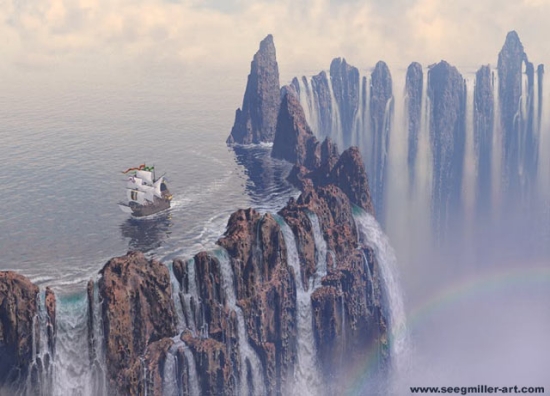 Inhabitants of the Sword Isles are no strangers to seafaring. But the crew and passengers of the Emerald Crown are about to set sail via the most unusual venue, for the River or Worlds is no mere sea that the Sword Islanders know. It is the primordial ocean from which the gods themselves drew the firmament of worlds. The lands we know are but one amongst a multitude of worlds.

Join the crew of the Emerald Crown, who will journey to strange destinations and face unthinkable perils.

Off the Edge of the Map will be run using the Fantasy Craft system by Crafty Games. The game will feature role-play, problem solving, mysteries, magic, and combat in nautical settings, far-flung ports, and exotic and unfamiliar planes. Possible inspirations include Sinbad, Pirates of the Carribean: At World's End, and Sailor on the Seas of Fate.

Pre-generated characters will be provided.

Oh, yeah. The description alone is so freakin' cool I can't imagine NOT being in this game.

Glad you like it. And here I thought I was being a bit vague.

You are. But vague can be intriguing!

Sounds fantastic. Can't wait to give it a go.

This looks to be loaded with awesome! A system I've never tried is a big plus too.

Pirates, yarr!! Are you running this game at LIGD?

Queenie said:
Pirates, yarr!! Are you running this game at LIGD?
Click to expand...

Do you want me to? I had considered it, but Spycraft took primacy by request of PKB.

Psion said:
Do you want me to? I had considered it, but Spycraft took primacy by request of PKB.
Click to expand...

Nope, it's totally up to you. I can play it here, if I can make DC Gameday

Add me as one of the open slots please. I'm very interested in giving FC a shot.

I'm going to try to nail down the character concepts over the weekend. Any early preferences? (It might affect the chargen.)

There is now a free spot in this game.

In other news, I have a batch of characters brewing. They still need names, and I have a few more I want to throw in the mix, but so far I have:

Ohhhohhhohhhhh can I call the Captain?

Queenie said:
Ohhhohhhohhhhh can I call the Captain?
Click to expand...

I think I can arrange that.

I'm really sorry to say that Fenris and I won't be able to make the gameday this time around. I haven't been able to get enough done in regard to my upcoming surgery and because of the surgery money is also a concern. I'm really, really sorry and we will totally miss everyone

And Alan, thank you so much for the offer to stay at your place. Bella will be sad to hear she won't be meeting your girls.