What are some of your favorite monsters that used to be part of the core rules, but have yet to return in any 5E products? What did you like about them? Have you ever used them? And would you like to see them return (core or otherwise)?

For the purposes of this discussion, "core rules" sources for monsters from previous editions are:

Some random former core monsters that have stuck with me:

Floating eye (1E Monster Manual)
These are (probably) based on Namor's hypno-fish from some old Marvel comics, and I suspect that's where my affection for these oddballs came from.

Wereshark (D&D Rules Cyclopedia)
They seem like the logical oceanic counterpart of werewolves, but they haven't made an appearance since 3e. I could easily see sahuagin weresharks being a thing...

Crypt thing (Monstrous Manual)
The idea of a neutral, rather than evil, undead guardian has an unexplainable appeal to me. I updated them for one of my 5E games, as the guardian of an ancient tower that rose from the ocean. When the party caused the tower to collapse for good, I had it teleport itself so it could intercept them while they fled...

Deepspawn (Monstrous Manual)
A monster which completely justifies the classic, randomly generated dungeon crawl. What's not to like?

Brown dragon (Monstrous Manual)
I was disappointed these flightless desert dragons didn't make a comeback in Fizban's. It never came up in our last campaign, but I assumed rogue brown dragons lived in the deserts near our setting's dragon-ruled kingdom of Vemurion.

Eyewing (Monstrous Manual)
Another monster likely among old favorites because it reminds me of a monster from other media: the fire eye from Castlevania III.

Wemic (Monstrous Manual)
A player in my first D&D campaign created a wemic PC, so there's some nostalgia wrapped up in this choice. They've consistently been one of my top picks for a 5E return, as a monster or as a PC option.

Primordial naga (4E Monster Manual)
Most of 4E's monsters left me cold, due to the lack of lore, but the concept and mechanics won me over on this one, with all those different elemental attacks. A 5E return as a mythic monster would be neat.

I noticed you didn’t list the monstrous manual in the OP, you then referenced it several times in your follow up post. I assume the op was a mistake?

Didn’t the yeth hound already make a come back in 5e?

Uni-the-Unicorn! said:
I noticed you didn’t list the monstrous manual in the OP, you then referenced it several times in your follow up post. I assume the op was a mistake?
Click to expand...

Uni-the-Unicorn! said:
Didn’t the yeth hound already make a come back in 5e?
Click to expand...

Yes, but not in the Monster Manual. Derro, howlers, and tabaxi as well.

Yora said:
Yes, but not in the Monster Manual. Derro, howlers, and tabaxi as well.
Click to expand...

That is right, but the OP said old “core rule” monsters that are not part of 5e, not just the 5e MM

Yellow dragon? Always thought it was funny they had red, green, and blue but no yellow. (There was even a gag about it in the Monstrous Manual...'these have been predicted by sages for a long time due to theories of primary colors'.)

These are in Minsc and Boo's Journal of Villainy

These are both in Mordenkainen's Tome of Foes.

These are in Volo's Guide to Monsters

JEB said:
Most of 4E's monsters left me cold, due to the lack of lore
Click to expand...

Maybe we have very different priorities, in terms of what lore is helpful, but they had quite a lot of lore.

JEB said:
Deepspawn (Monstrous Manual)
A monster which completely justifies the classic, randomly generated dungeon crawl. What's not to like?
Click to expand...

I think Jerry Holkins used a variant of these in the Aquisitions Inc C Team game, as part of the Wandering Crypt.

I liked Phantom Fungus from 3E. A four-legged plant creature with tongues like Ropers to grab PCs; plus they are invisible!

Only a CR3 creature in 3E, so could be used for low level parties. I had fun with them several times in adventures. I should probably try to transfer them to 5E.

Has the leucrotta ever appeared in 5E yet? I stated on up for my session last week and had great fun with it.

el-remmen said:
Has the leucrotta ever appeared in 5E yet? I stated on up for my session last week and had great fun with it.
Click to expand...

Yep, they're in Volo's Guide to Monsters.

AcererakTriple6 said:
Yep, they're in Volo's Guide to Monsters.
Click to expand...

Ha! I have that book. I guess I need to compare it with what I came up with. 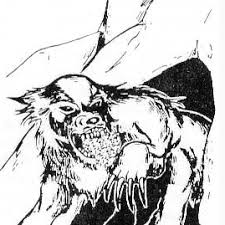 CR 4-8 undead that do something legitimately frightening and long-lasting to PCs? (Beyond ghosts, anyway)

EDIT: Honestly, I'm kind of surprised gibberlings haven't returned in 5E, especially with them being a Realms monster staple after their first appearance.