In the latter half of the 19th century Chicago grew from a town of a few thousand farmers to a sprawling metropolis of skyscrapers and a population of over 500,000. Those final decades were associated with rampant growth, progress, and innovations culminating in the World’s Exposition of 1893. Yet Chicago’s emergence to prominence was not without tragedy. The Great Chicago Fire of 1871 nearly reduced the city to embers. Riots and strikes broke out. And there was the World's Exposition.

The bustle of the World’s Expo hid an appalling snake in the grass, Mr. Herman Webster Mudgett, aka Dr Henry Howard Holmes. Holmes would become infamous as America’s first serial killer and proprietor of The Murder Castle. He confessed to 27 murders, and was purported to have killed as many as 200 victims before his capture. Some believed he may have been Jack the Ripper. Others knew him as a devil.

Within this Kickstarter you’ll find two books: The Devil’s City, a novella, and Horror in the Windy City, a full-length RPG campaign sourcebook expanding the Whispers in the Dark RPG universe. Whispers in the Dark is compatible with the 5th edition of the world's oldest rpg and set in a world adjacent to our own. The books can be enjoyed independently, but when conjoined they offer the players, readers, and game masters a truly immersive experience.

The Devil's City is an illustrated, hardcover, limited edition novella by Bram Stoker award winner Sara Tantlinger and Matt Corley. Within its 90 pages the book follows H.H. Holmes as he stalks and captures five victims through chaos and confusion of the 1893 World's Exposition. Each chapter begins with a diary entry from the devil himself, and contains evocative illustrations to bring the chapter to life.

Horror in the Windy City brings the excitement, intrigue, and beautiful chaos of the time period to your table using the 5e rules you already know as adapted by the acclaimed Whispers in the Dark RPG written and developed by Matt Corley and M.T. Black. The beautifully illustrated 180+ page book is a fully realized campaign sourcebook covering Chicago in the latter half of the 19th century. There are new rules, backgrounds, a new alignment system, NPCs, scenarios, and more. In short, it’s everything you’ll need to take your party of investigators to Chicago. It will be up to them to find their way out.

Thanks for support,
matt 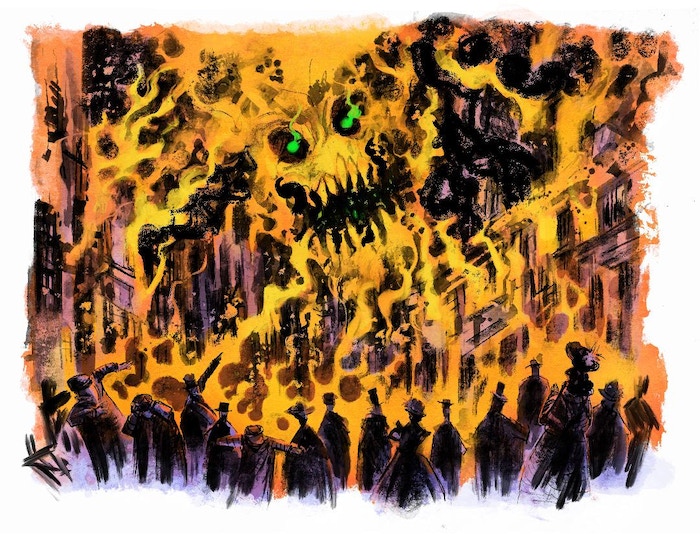 Whispers in the Dark is a different kind of d20/DnD game, and I want to share with all of you some of the reviews that have come in since it's release in January. The game was playtested by nearly 100 people (the sanity rules by many, many more) and we're just a few sales from Gold Status at DriveThruRPG where we have a nearly perfect 5-star rating.

Whispers in the Dark

Geek Girl Authority - "Whispers in the Dark is everything I have ever wanted in a tabletop role playing game. It features horror and mystery, an easy classless leveling system and mental health awareness. There is also enough information that if one wanted to take the sanity/madness mechanic and add it into their own game, they could do so easily." The full review is HERE.


Xaositects - "Having read through the chapter on character creation, I have to admit that this method is quite brilliant when you think about it. Detectives, as an example, do the same type of job in real life: Investigate crimes, interview witnesses and suspects, come to a conclusion of who is the likely perpetrator of the crime, then prove their case... What I also like about this method of character creation is that it is not about amassing power and capabilities to kill monsters (in fact, the characters are capped at level 10). It’s about solving puzzles using experiences your character already has, through their relationships with other characters (new and old), and the personal growth of learning a new skill as they gain experience. " The full review is HERE.


Egg Embry, d20 Radio - "There are many types of gaming groups, and one that I hear about with frequency are the D&D-Or-Die gaming tables. These groups are set in their system choice and they will not try a new system. They’re not necessarily opposed to a new setting, just opposed to learning a new ruleset. If that’s the case and your gaming group is hardcore Dungeons & Dragons Fifth Edition yet you want to spice it up with a new setting with some Victorian era horror, Whispers in the Dark is waiting for you.


Backing away from that subset because you’re not 5e-For-Life, is this a good game? Yes. Whispers combines a solid engine (D&D 5e is a winning version of d20) with the right mythology, setting, and art to make a game you’ll want to dive into. Using the 5e engine adds an additional dimension that some Mythos RPGs miss out on, there’s room for character longevity and a campaign." The full review is HERE.

Let's Get Galactic (5 stars) - "I love that this story didn’t really skimp on the gore, but didn’t rely too heavily on it either. Rather than only focusing on the grittiness of bloodshed, we’re privy to some of the inner workings of a madman’s thoughts. Consumed by his desire to know more and to push boundaries, inflicting pain on his subjects is just a bonus to what he feels is work that he’s being called upon to do by something bigger than himself. The thin line straddled between inquisitive scientist and bloodthirsty killer is conveyed so well even in just a short collection of individual character’s stories, and the author does an excellent job of letting you get into the murderer’s head." The full review is HERE


High Fever Books (4 stars) - "Now let’s talk about Tantlinger and Corley’s depiction of H.H. Holmes. He is already known as a monster, but here he becomes something more. Witnessing his cold calculations and maniacal actions is quite disturbing, especially considering how personal we get with his victims. They have made him this almost otherworldly presence that knows all the goings on in and around his castle, trapping the ones he wants in his basement of death. We even get a chapter solely focused on him and what he is trying to accomplish with the five characters. And when we reach the end of the book we get a picture of truly how evil Holmes is...The Devil’s City is the ideal novella for anyone that wants to dig a little deeper into the H.H. Holmes mythos." The full review is HERE

The KS can be found HERE.

Thank you for your time and support!

Kickstarting During a Pandemic

A question I’ve been asked a lot is why am I doing a Kickstarter in the midst of the pandemic. Crowdfunding is hard at the best of times, and this is far from that. Folks are laid off, disposable income is diminished, and we have other things to be worried about.

These books created work (and will create more work) for 17 people. That’s why I went ahead. The folks involved with the KS have all been affected financially by the current circumstances, and when funded this project will help all of us. Before I go any further every person has already been paid for work that’s been completed. What’s on the line is additional work, bonuses for funding (and beyond), royalties, and for me to recoup what’s been paid out.

How can you help? The easiest way is to share posts on your social media. You may have folks that like horror or RPGs and don’t even know it. Maybe they know folks that would be interested. It all helps. Organic growth of projects like this have an enormous positive impact, and I can’t do it without your help. 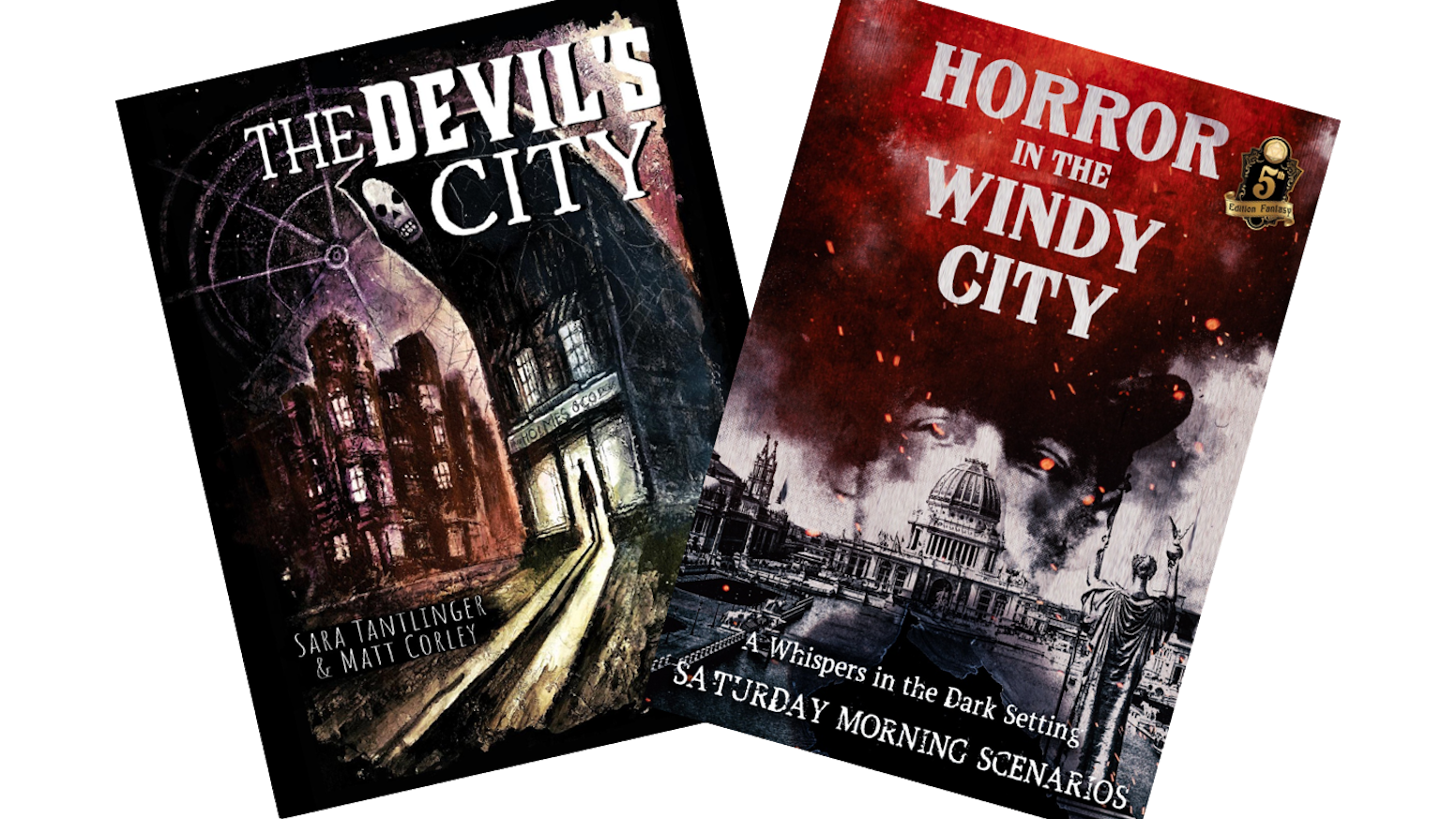 Obviously, pledges help too, but I want you to take care of you and yours first. These books will be published one way or another, and you can come back around later if this is your thing.

Please feel free to ask me anything in the comments, share this post far and wide, and stay safe.

We are funded and in the last 8 hrs of the campaign.

A #DnD setting in late 1800s #Chicago with everything you need for a campaign of #horror and #investigation.
Support as you're able and thank you