Dewydd
Briefly alighting, I spin on the balls of my feet and leap back into the air toward the sphinx that's on fire. I lash out against it. If it falls, I switch my attention to the sphinx adjacent to it.

Dewydd launches into the remaining Sphinxes with an identical result as the first time; despite their power, and their sheer evil and hatred, they nevertheless cannot withstand the mixture of skill, magicks, and fury that Dewydd is able to deliver; their forms are destroyed, and their souls are disrupted in but a few, short strokes of his blade.

As Dewydd's blade disrupts their life force, Val once again begins to howl. Of the two souls within its range, however, it is only able to snag one of them. The other soul departs, drawing curses from the sentient weapon!

Sylvar moves forward upon the advice of Vale.

Vale says, "As long as you don't get too close, you can kill them at will. They are held fast by the holy power of Clangeddin."

Both Sylvar and Vale move to the doorway, and no further; it is entirely sufficient. Sylvar's holy arrows put a quick end to both of the turned Sphinxes, and as their life force flashes outward, Val once again begins to howl.

The axe's curses continue, as it laments losing yet another pair of powerful life forces, which it reminds everyone will now serve the forces of the Lower Hells.

COMBAT HAS ENDED! Everyone, what do you do?

"Well, that could have turned out much worse! Let's continue moving forward... As my magic ends, I groe progressively weaker in combat. We can come back through after and look for traps and treasure. For now - moving forward and only searching for traps on our path would be the better choice."

Supporter
Tam, seeing the results of Friend Sylvar, Respen, Thallok, Dewydd and Vale's attacks, and the subsequent demise of the undead sphinxes, quietly puts his arrows away, douses his lantern and lets it cool before packing it and sets his bow beside him as he sits himself with feet dangling over the edge. A quietly relieved sigh escapes his lips as his shoulders sag, relieving the built up tension of the battle. He, then, whispers a brief word of thanks to Yondalla before getting up, hooking his cooled lantern onto a belt hook and standing up again along the edge of the pit.
He watches his comrades as they determine the next steps, then slowly climbs down into the pit to join the others. Tam is still strangely quiet. Sphinxes, especially undead ones, unsettled him more than he cared to admit.

Despite the way it feels to him, Tam finds that it takes him less than a minute to re-join his comrades, all of whom are waiting for his assistance with the new obstacle: the double doors on the other side of the room.

After tenish seconds of watching Tam sit and dawdle after speed being urged, I shake my head and huff in minor annoyance before flying to the doors and pulling them open. "Prepare yourselves."


At the end of the second round, Dewydd opens the doors.

Dewydd flies to the doors, grasping the handles firmly and pulling. The runes on the door come to life, glowing a bright red! To his surprise, Dewydd is not assaulted by a trap, physical, magical or otherwise; but the doors hold fast, refusing to open, obviously locked by some magical means.

EVERYONE: What's next? Actions which are declared will happen at the start of the third round.


Buffs that Dewydd cast upon himself:

Buffs that Dewydd cast upon others:

Geas
+5 bonus to all saves for duration of adventure.

DURATIONS: (As of start of third round)

Supporter
Tam, immediately comes out of his funk when he sees the glowing doors that Dewydd is trying to open.

Tam finishes packing while on the run to the doors. He grabs one of Dewydd's arms : "Please, Dewydd, let me see what I can do first."

When Dewydd backs away, Tam quickly gets his tools of the trade out and goes to work. Realizing that Dewydd triggered no trap when he grabbed at the doors, he still checks for them all the same. (DC roll: 23)

He then checks the magical aspects of what's locking this door and determines whether simply picking the lock releases it, or if a Dispel Magic while he picks it is required. (DC 11 to determine; DC 15 to pick the lock).

The runes which cover the door make no sense; they look like no runes anyone has ever seen. However, when Dewydd grabs the handles, and the runes light up, Respen notices that only some of the lines light up, and those that do, form recognizable runes.

The runes are Draconic in origin, the language of wizards. Respen relays their meaning to the party:

SPEAK THE 4-LETTER NAME OF THE TASK THAT MEASURES ONE'S WORTHINESS TO PROCEED TO THE NEXT LEVEL OF ACHIEVEMENT.


Tam, there are no traps on the door, and there is no access point that you can see to a mechanical lock; you've heard of this before. The lock is indeed mechanical, but there is no keyhole; the entire mechanism is inside the door. The only way to turn the tumble lever and cause the door to open, is with a specially-designed spell that is keyed to the door itself. The spell for this particular door seems to be keyed to the runes. Thus, the only way past this door is to answer the riddle that Respen just described.
END OF THIRD ROUND. Declared actions past this point will occur in Round 4.

"Test,"
I state without thinking. Concern suddenly flits across my face as I ready myself for potential pain. When nothing happens I chuckle and ask, "Anyone mind saying 'Test' in Draconic?"
Last edited: Oct 15, 2019

As the Elf intones the arcane command, the runes glow bright blue, and the doors fling themselves outward and open!

The chamber beyond is 80 ft. square with a 40-ft. high ceiling. The door you have just opened is positioned in the west corner of the chamber. Situated in the middle of each of the four walls is a 10-foot wide stone door covered with inscriptions. The remaining walls are covered with detailed murals.

In front of each door is a stone pedestal, 10 feet wide, 20 feet long, and five feet high. Crouching on each pedestal are full-sized granite statues of sphinxes. Each pedestal holds a different sphinx, and all face their respective doors in silent vigilance. To the right facing southwest is a falcon-headed hieracosphinx, and to the left facing northwest is a goat-headed criosphinx. On the other side of the chamber, a male androsphinx faces northeast, while a female gynosphinx faces southeast.

In the center of the chamber is a squat pyramid, perhaps five feet high. Composed of smooth, tan stone, each of the four surfaces is engraved with a small triangle with an eye set into the center. 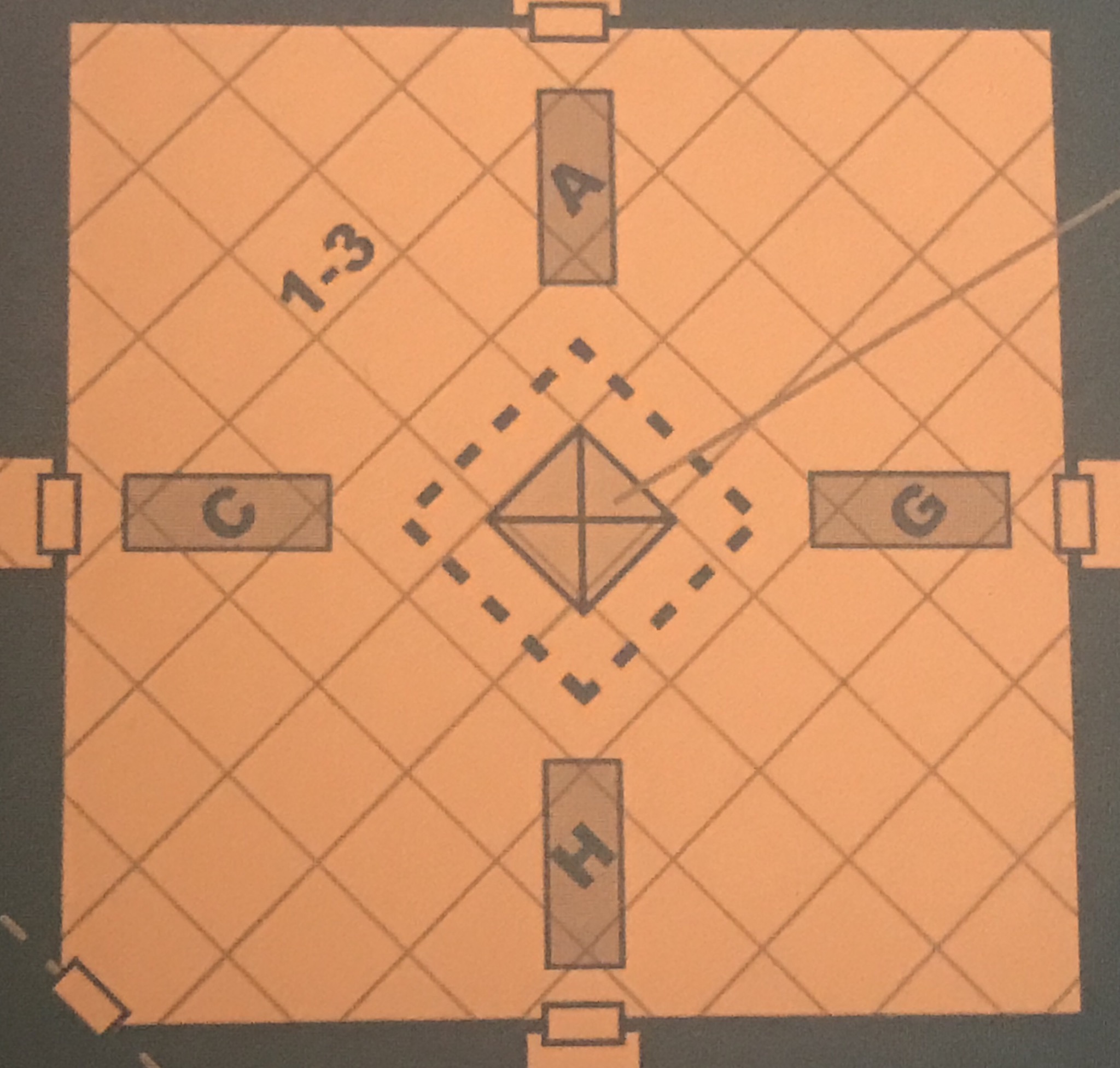 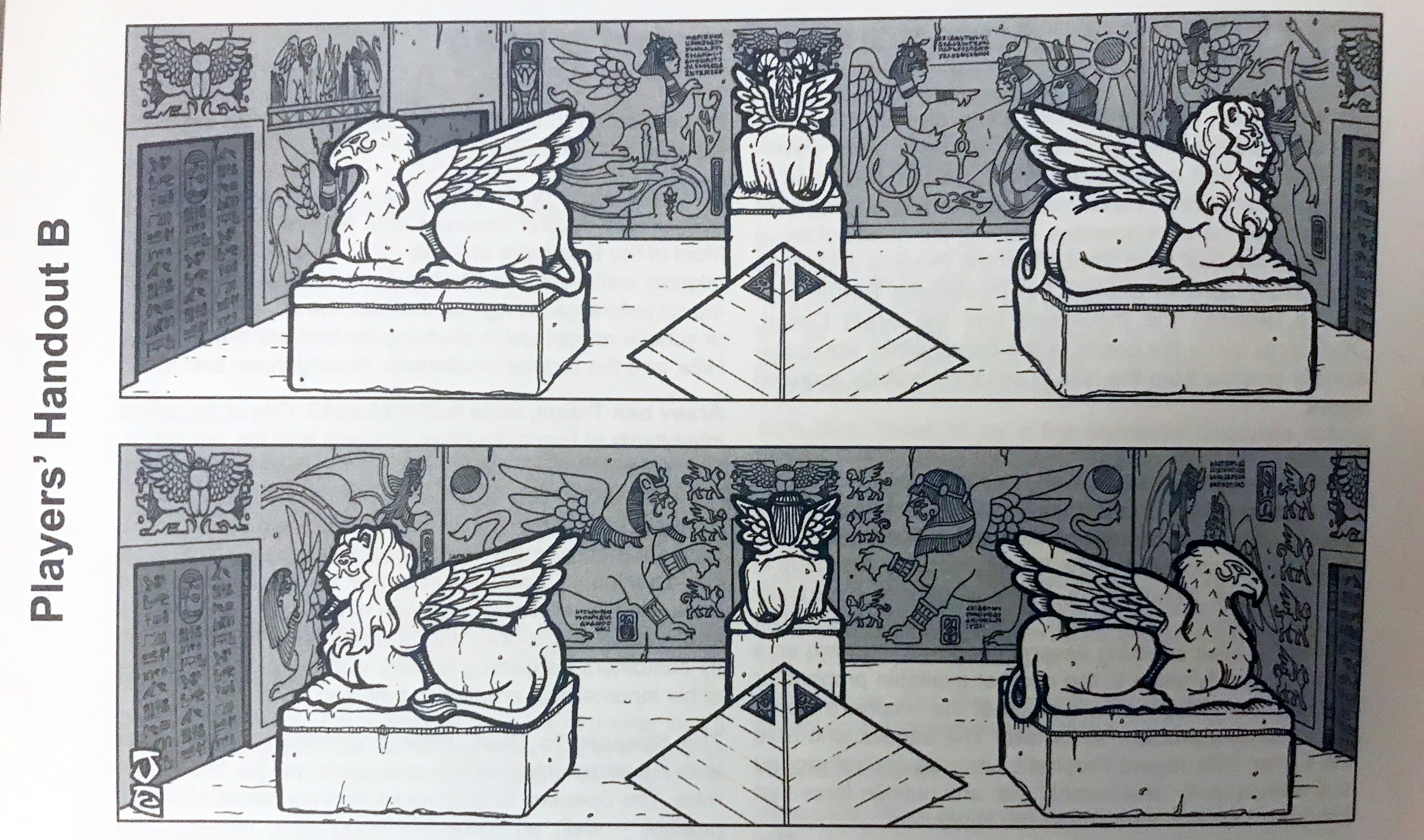 Ebony: "Well that's something. If I wasn't so worried about traps I'd comment on the sheer beauty of it."

Duncan: "Yes it is quite beautiful. I expect it to be even deadlier. Alright company let's give them a base. To the fore." Duncan presses forward taking point with his team lined behind him. Moving into the room with a determined if cautious stride. "A game of leap frog gents what say you." This last addressed to the rest of the party, as his group moves forward and hunkers in place.

Using my flight to avoid any pressure plate traps, I move to the first door to my left - the one with the goat-headed criosphinx. I examine the sphinx and the door, muttering, "It couldn't be as easy as turning that tiny pyramid so that each facing points to a sphinx... could it? What about all these pictures on the walls? Hieroglyphics?" Speaking up, I ask, "Can anyone make heads or tales from these things? What do they represent? Tam, can you find a clue on how to open these doors based on them?"


Decipher Script 15 total. Something tells me I won't be able to make heads or tails from the pretty pictures.

Supporter
Tam tries his best to decipher the script, but it's beyond his ken.
(Rolz: 8, 9)

Things that are obvious to everyone:

The murals relate a story, beginning with the mural on the northwest wall, and proceeding clockwise around the chamber.

NW: This mural depicts the Sphinx Queen slaying the majestic Gold Wyrm and framing the Naga Council. Ironically, the golden Dragon who is depicted bears a striking resemblance to Lady Abigail's true form. Perhaps one of her ancestors?

SE: This mural depicts a bloody Sphinx civil war, one side led by Khubsheth, the other by the Sphinx Queen.

SW: This mural depicts Khubsheth convincing the golden-scaled Sphinx to return and although they lead their armies to victory, the Sphinx Empire is forever ruined.

Dewydd, when you examine the top of the pyramid, you see that each facing has an indentation in it, as if to accept a geometrically-shaped key of some sort.

Dewydd, your examination of the Sphinx unnerves you; this huge thing is NOT a statue. It is a stone guardian of some sort. It is alive, if not with an actual life force, then at least with the mystic energies of artificial, magical animation. You get the feeling that failure of this test in some fashion will result in this thing springing to life. Your surmise that it might be hard to defeat, perhaps even as dangerous as a Golem.

Dewydd, you notice that there are inscriptions on each door, and since you are examining the Criosphinx first, Respen joins you, and translates the runes with the ease of a practised wizard.

Respen intones, "THE RIDDLE OF THE CRIOSPHINX: Between darkness and light, the foot on the tightrope, the wings in the air, without me you fall! What am I?"

As Respen recites the riddle, Tam gets a 'gut feeling,' and then says:

"The tightrope line seems important to me, for some reason."

Val says, to Respen: "Careful lad, now that you've spoken the riddle out loud, I'd lay gold pieces to cheese wheels that it must be YOU who answers, and probably pretty quick, lest these beasties come a'calling."

"Four doors, four indents, so probably four keys at the end of deadly stuff. Hmm... It might be best to take our time with this then. If we still have the majority of our magical defenses, we keep going? Failure will likely result in each stone guardian activating and attacking us."


After hearing the recital of the riddle, Tam's input on tightrope, and Val's warning, I ready my weapon and place myself between the one who must answer and the stone guardian.

"If the tightrope bit is the most important and without it you'll fall, I'd guess balance. Looking at the other parts of the riddle, harmony would be a possible answer if light and darkness are referring poetically to good and evil. As a warrior, I believe strongly in going with one's gut. Answer it how you will - I'll allow no harm to come to you while I still stand."

Supporter
Tam whispers, though with a fierce hissing quality that all can hear: "That's it! You have the answer. Say it. Say it with confidence, though. Say it with the authority of command even; for I fear, with these things, any ounce of perceived trepidation will stand against us just as much as the wrong answer will."

Sylvar positions himself so he can see into the door way, but stands ready to support any retreat should there be the need. His Mystic Bow is read.