"Well... at least we'll be able to fully buff ourselves before this party gets kicked off," I quip genially. "Give us a moment to prepare for the fight to come... Unholy, eh? Definitely going to use Protection from Evil this time around."

As they wait ... patiently ... for the trap finders to open the door the gang stands to the side. At some point Ebony begins humming a tune to herself.

"Mmmm mmm Mmmm mmmm mm MM."
It's a catchy old tune which Duncan who's still annoyed with her tries to ignore. He gives her a light "Shhhh."
The twins don't help as by the time she gets around to her third round they start singing it out loud.

Respen:
~ Trapped pit, Locked Door Activates Trap, Undead Other Side ~
"Vale, I'll open the door; you still have the potions and scrolls to hide from the undead? I have four (4) of them itching to be used. I'll keep one and give the other three (3) to you to distribute. I will trigger the trap at the door. Depending on what's at the other side, we either drink the potions and try to circumvent it, or we attack head on. "


Respen removes a wand of greater mage hand from his belt and prepares to use it to open the door. If required, he will wield a wand of knock spells as well to force the door open.
Vale:
"Val, good ta hear ye, my magical friend. How close are they? And what are they? Glow blue and let's kill some baddies! Can ye give me a li'l of that?"
"Everyone, take one of these potions. If anythin' comes through the door an' gets past the traps, use the potion until we can collect ourselves. Moronic undead won't see you. Smart uns might, but the ones I've seen that are smart uns, they tend to announce themselves."
"Who might need this magical mace? If you deal the most solid of blows, it'll drop them in their tracks.
I received it from the temple in Dyvers before we ventured out to Skorane."
"Steal yourselves, my comrades."


Vale distributes the HIDE FROM UNDEAD potions to the group; he will pop a scroll of the same for himself if needed. He telepathically commands Val to glow as brightly blue as it can. He gives the mace of disruption to whoever can wield it (DM advisory requested). He grasps his talisman hanging about his neck allowing him to increase his TURNING ability.

After waiting a minute or two on the various spellcasters in the party, Respen uses his wand of Greater Mage Hand to pull the handles of the double, gold-gilded doors at the end of the hallway, despite not being able to see them clearly at this distance.

As expected, the entire floor drops out, resulting in a massive, 20 ft. wide, 20 ft. deep, 70 ft. long pit; there are no spikes below, only smooth stone. There are no obstacles that you can see. It's simply a box pit. If you had fallen into it unawares, you are fairly certain that you would have run the risk of a few broken bones, mostly ankles, wrists, and head injuries, the types that are common when falling such a distance after losing one's balance. This pit seems to be less of a death trap, and more of an obstacle and/or deterrent.

Respen, you're not 100% certain, but from here, at first glance, it looks as if the door were false, and that there is another door, directly (20 ft. down) below it, leading into the bottom east wall of the pit.

Now that the floor has given way, there is less to interfere in Val's detection abilities. The glow of the axe intensifies, going from "bright" blue, to an INTENSELY bright, almost white hue of blue! The axe mutters only one word in response to its enhanced detection:

Although Val is certain of the mummies' presence beyond the far door, there is nothing in the pit itself that would indicate any potential dangers or difficulties... although, once you are all down there, it might be difficult to escape, once the mummies DO arrive.

EVERYONE: What do you do?
W

Tam just shrugs upon seeing the trap and false to true doors set-up. This was a new one on him, but he immediately surmised the simplicity of it all:
1.) Unsuspecting of the trap, one opens the door and falls into the box pit hurting themselves, probably badly.
2.) Then, the mummies come to the attack, but, because of the fall into the pit, the adventurers are hurt, most of them pretty badly, and can't put up much of a fight.
Not very imaginative. Oh, totally effective in its simplicity --- but, Tam loved the challenge of a complex puzzle, or trap, to overcome. Surely, it was all hubris on his part; but he loved the challenges and twists so much more than this straightforward approach to a trap.
All the while Tam is thinking all this, and while standing at the lip of this pit, he gets out his lamp and lights it. He then takes 4 arrows, a vial of lamp oil, a raggedy shirt that he tears 4 strips from and his bow. He wraps the strips, one for each arrow, around the arrowhead and pours lamp oil onto each strip on each arrowhead until he's satisfied that the cloth is thoroughly soaked. When he pours the oil, he does so over the pit so as to not have any on the floor around him in order to avoid any accidental fires around his feet.
Now, when the mummies entered, he would be ready to light the oil-soaked rag on an arrow, then draw and fire at the undead horrors --- and hope he didn't miss.
S

Sylvar looks at the pit, "well that's new isn't it?" He summons his bow and fires a grappling arrow to one corner of the pit at such an angle that the party can use it as a zipline. He attaches the other end of the rope to the nearest strong looking point of attachment.
D

Duncan speaking in a hushed tone: "I'm sorry Val did you say mummies... as in plural."
The young nobleman looks rather displeased.
"Someone remind me why we're down here again."

He watched as Sylvar sets his grapples. Ebony claps him on the back and repeats a joke from their past. "We're on a mission from god." she catches him with a grin as she sets another rope for descent.

He sighs and then prepares to follow down the rope to the floor. "Wait... no no we're not."
She laughs.
S

Sylvar unstrings his spare bow and uses it as a handle to make use of his zipline. He hold the bow close to the middle to minimize the risk of damage to the limbs.

When he reaches the bottom of the pit he summons his Mystic Bow.

Tam still stands at the pit's edge to rain down fiery retribution from above, hoping the company doesn't get too much in the way to spoil his shots.
D

Realizing there's another set of doors to open down in the pit, with reported undead behind them Duncan holds up. They have two knotted ropes lowered and secured to one of the pillars. "Ropes are lowered hold here. I don't want to be stuck in a pit with no way to retreat if a bunch of grave spawn come spilling out."

Sylvar uses Shadow Conjuration to conjure an unseen servant. He commands the servant to open the doors the mummies are behind.

Sylvar lowers himself down into the pit, and approaches to within 40 ft. of the door. He then casts Unseen Servant, and commands it to open the door.

As Sylvar is doing this, Vale's eyes begin to glow a bright, bluish-white color! The Dwarf quickly shimmies down the rope, and runs to catch up to Sylvar's position, just before the spell is cast! Vale is now standing directly to Sylvar's left side.

The door is apparently not trapped, for it opens with ease! Beyond the door, Sylvar can make out many creatures, huddled together in the darkness, snarling! His vision can only penetrate the first 20 ft. into the room from his current position, but these creatures are close to the door, as if they had come from other positions in the room, to be close to the door when it opened.

The creatures begin to glow, outlined in the same hue as Vale's eyes! When this happens, the entire room is lit very well, brighter than the glow of a hundred torches!

The grey boxes are ten, tall pedestals.
There are a total of ten creatures huddled near the door! And all of them look like Mummified Sphinxes!!

The sphinxes wail in agony, as they are lit up by the axe! They had apparently been waiting ever since the pit trap had been triggered, but upon seeing the axe, they seem dismayed and aggrivated. In fact, two of them flee toward the back of the room! Vale lifts the axe above his head, and chortles with glee!

Vale chortles, "By the power of the Sacred Silverbeard, I command thee, BACK!!"

:: Duncan & Company ::
Initiative 14​
Seeing the nature of the threat Duncan's initial tactical plan goes out the window. "Aww Shazbot! New plan crew. Regular mummies, this is a great spot. Flying mummies we need our back to a wall. Down the rope on the double." He taps Ebs on the shoulder and gives a hand signal to follow him down. Waves at the Twins to to make sure they understand, and signals for them to provide cover.


Update Text said:
Having reached the bottom, the company forms up and moves forward. As they move forward, Lenny, and Duncan swap places, in the formation. As do Trav and Ebony. Centering the groups auras and maximizing their support of each other. The foursome come to a stop with a 5 foot gap between themselves and the parties second line. Leaving room for the mid line to maneuver and denying flanking opportunities to the mummies, who by the looks of them will be able to fly and envelope them all from behind.
Click to expand... 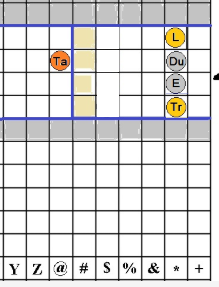 The company moved forward from $7-$10, to *7-*10.
Swapped Lenny and Duncan, and Swapped Ebony and Trav as the twins are supposed to be on the outsides of the formation.


Travis and Len will hold their standard actions to breath fire on the first mummies to attempt to leap/fly over the front lines.

Sylvar will cast grease on the hallway floor directly underneath mummies 1,2,4 and 5. Effectively turning the hallway into a flammable slip-n-slide.
Last edited: Sep 6, 2019

9 & 10 are the Greater ones. The rest are lessers.
7 & 8 were turned / fled.
I had to guess at where the characters would want to be positioned. But I think that I made some decent choices. Fighters up front, support in the back. 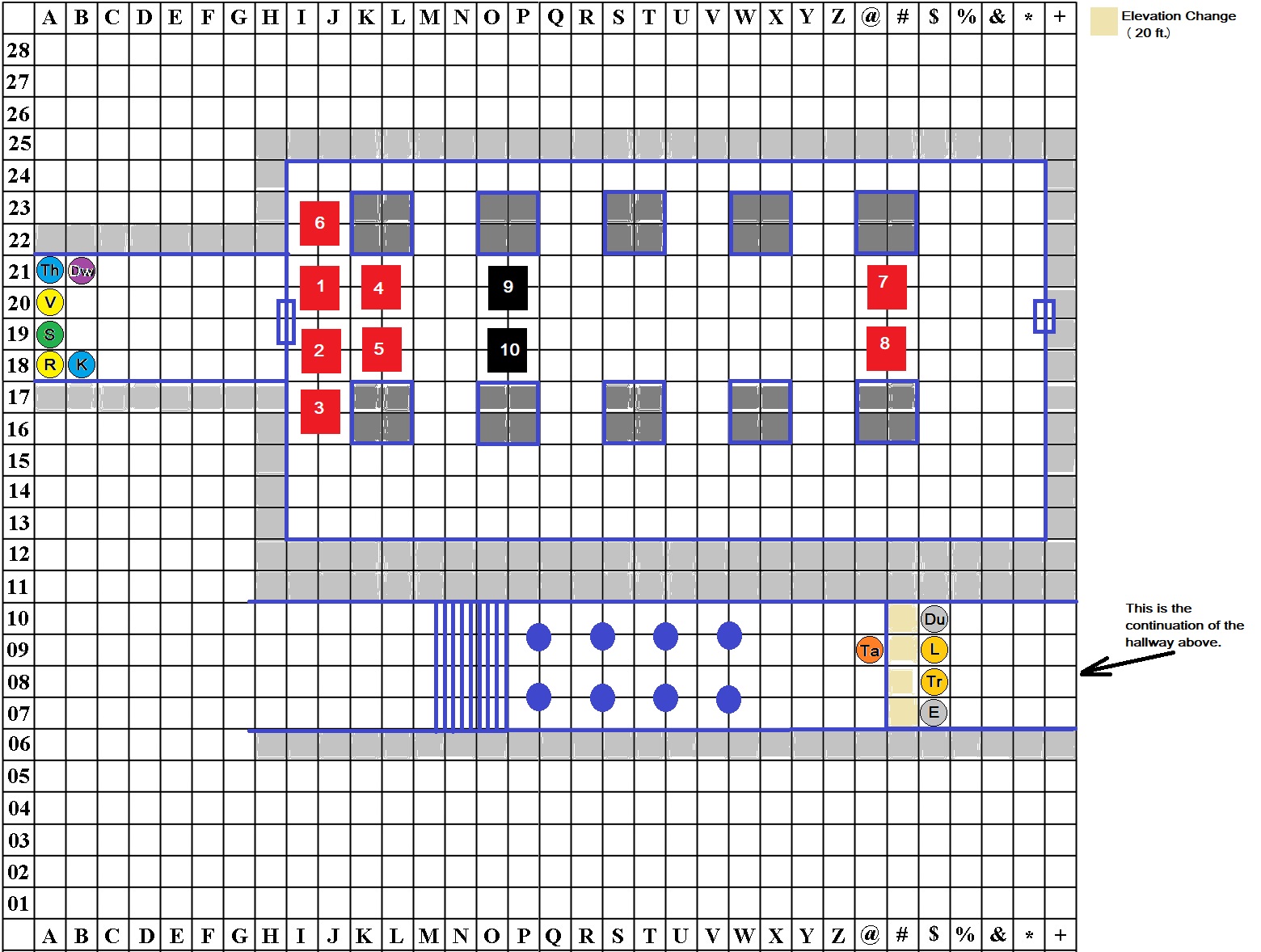 
RESPEN: It's your turn! Make your fear saves (one at DC 19, the other at DC 21), then state your intended actions!

SYLVAR: It's your turn! Go ahead and state the coordinates for your Grease spell.
S

Sylvar, gives Respen a wink and a smile and casts grease onto grid K19... "Light 'em up, brother", he says with a glint of excitement in his eye.