Respen, wholly unaffected by the natural fear associated with the presence of mummies, holds until Sylvar paints the area amidst the mummies with an arcane grease, glistening on the ground. Opportunistically, Respen smiles in spite of himself, and while moving across the corridor, casts his magical fire with an Elven evocation. It took less than a moment, but more than an instant for an explosion to burst with a whoosh and loud crackle.


Fireball cast centered on K/L 19/20 : damage = 35 hp; Respen moves to D 21 in an effort to make himself difficult to hit for any mummy able to get through the door.


It is now Dewydd's turn. Dewydd is within easy charging distance of the two Sphinxes in the doorway.

Dewydd, who was already hovering in anticipation of meeting foes with the ability of flight, draws his massive blade, and charges into the room! The charge is so quick, and so well-executed, that the lesser Sphinxes cannot react in time, and can only watch in awe as the magical warrior speeds past them, intent on putting an end to their leaders!

The charge attack strikes Mummy #09 dead center, cleaving the beast in half with a mighty, single blow! There is a brief flash of blue light, as the negative energy life force is dispersed, and the mummy collapses into a heap of bones and rotting flesh!

In the same, fluid motion, Dewydd spins, striking the second Sphinx (#10) in almost the exact same place, with the same result; there is another flash of light, as the negative energy dissipates, and the undead soul departs, leaving behind only a useless pile of rotting remains.

In the space of about 2 seconds, Dewydd once again proves his worth in physical combat, using a deadly combination of training, speed, magic, and rage, to tear asunder two mighty opponents!

The company holds their ground a quick step behind the groups second line. They watch as Sir Dewyyd devastates a row of mummies. The twins continue to hold their actions prepared to blow fire on any mummies that cross the line of death. ( Column E ) ( Lenny Damage 6 Fire / Travis Damage 4 Fire ) 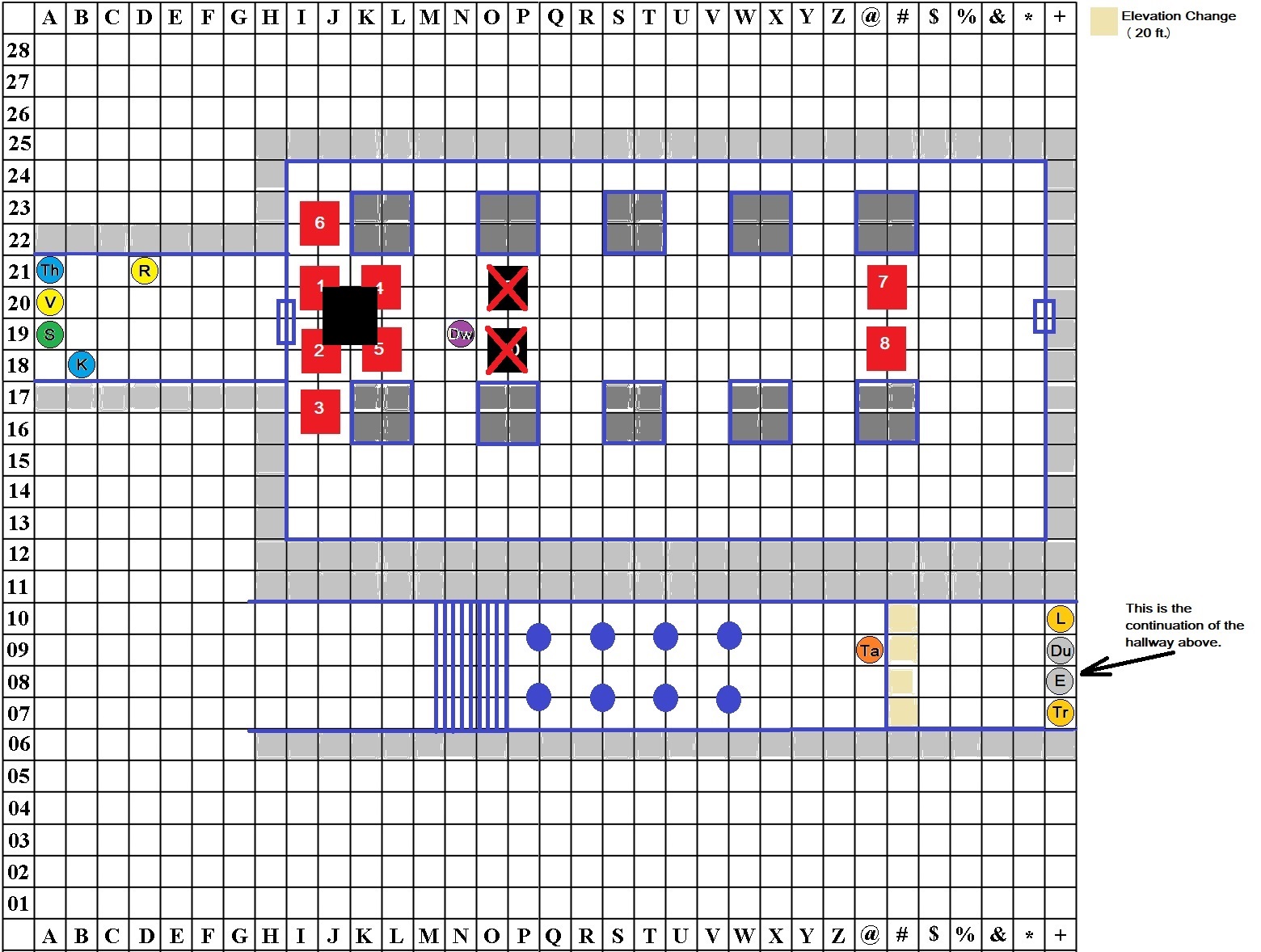 Kleborn rushes forward, intent upon putting an end to this vile threat. He had never been especially fond of the undead, but these creatures had a certain something about them, that made them seem even more vile, more abominable than a typical undead creature; this did invoke hatred with Kleborn, but rather, a sense of urgency. One does not become angry at a disease; one simply administers the cure.

In this case, the cure was a mithral, runic blade, which, in a like manner to Dewydd's blow, cut the first Sphinx in half with incredible ease. The blow was less precise than Dewydd's, but carried an equal amount of power with it, nonetheless; with a flash of light, the Sphinx's soul left his cursed form, as it sped on to its fate in eternity, that of ineffable damnation.

Being under the effects of Dewydd's Haste spell, Kleborn is able to complete another full swing before losing the momentum of his charge; the blow lands squarely on the skull of Sphinx #02, drawing a shriek of rage and emnity from the creature, as sparks of energy fly off the mystical blade.

TAM: It's your turn! You can see Sphinx #02 through the doorway well enough to target him with your bow, if you so desire. What do you do?

Supporter
Remembering the horror of the dream attack/slaughter on the Great Sphinx earlier, Tam swears 'never again if at all I can help it' and grabs one of his oil-soaked arrows, touches it to the now open lantern flame igniting the arrow. He then draws the bow, feeling the flame's heat against his right cheek and upper forehead and absently seeing the flicker of the fire by his right eye.

Tam's first arrow drops too quickly, and skips off the floor. But his second arrow strikes true, singeing undead flesh! Sphinx #02 is quickly burning away into nothingness, but as of yet, still clings to unlife.

Thallok draws Mirios, and gives a mighty ROAR of battle, as he charges Sphinx #02! With the precision born of a practiced warrior, Thallok cleaves the weakened, pathetic thing in half, almost as an afterthought! There is a flash of light as the Undead creature before him is transformed into a heap of bones and cloth! 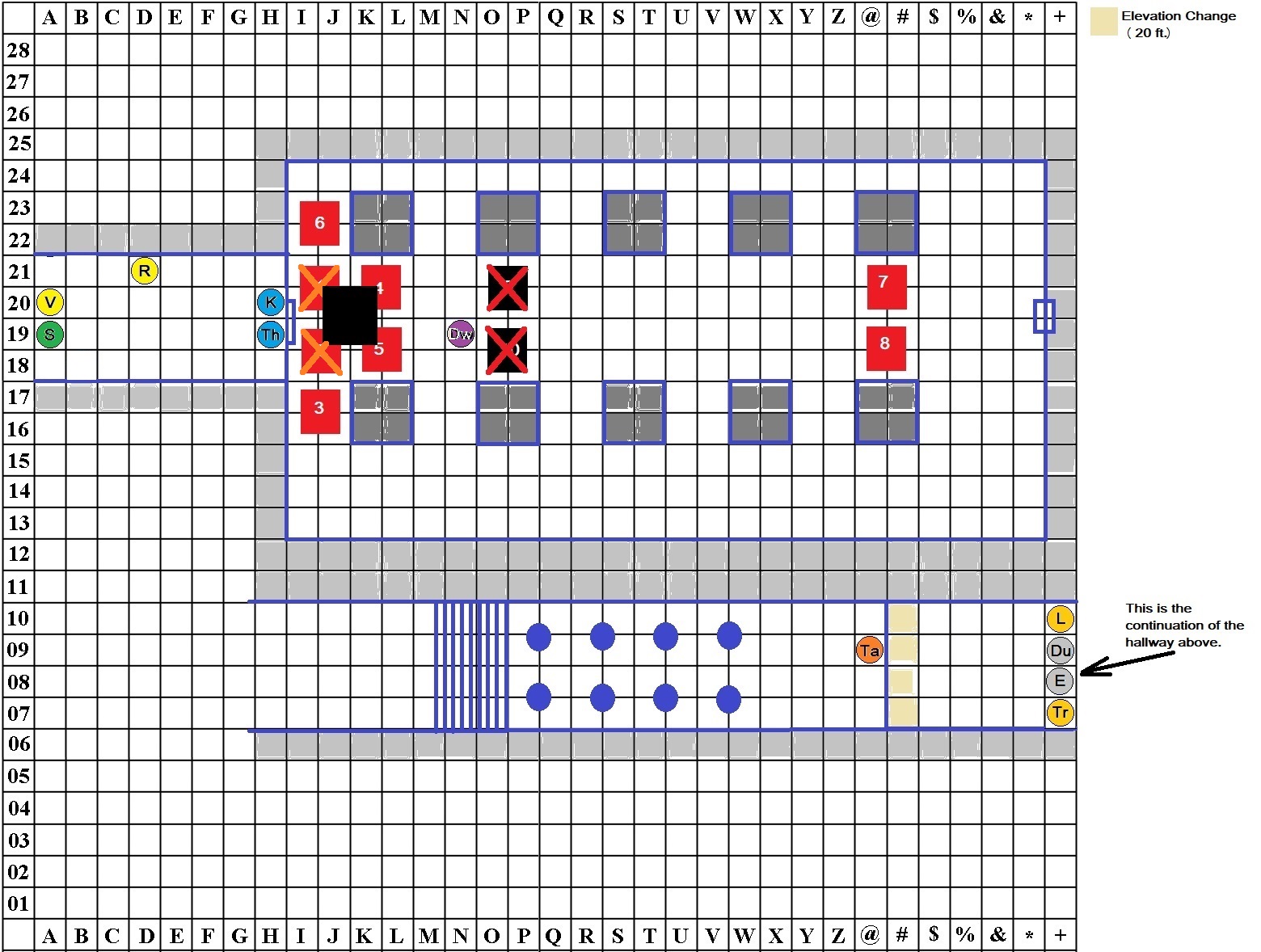 MUMMIES are up next! Stay tuned!

Sphinxes #04 and #05 charge straight forward, down the hall, as they take to the air, fueled by hatred and rage!

Sphinxes #03 and #06 do not take to the air; instead, they simply take a 2-square adjustment into the positions of the destroyed Sphinxes, and savagely attack Kleborn and Thallok. (#03 attacks Thallok, and #06 attacks Kleborn.) 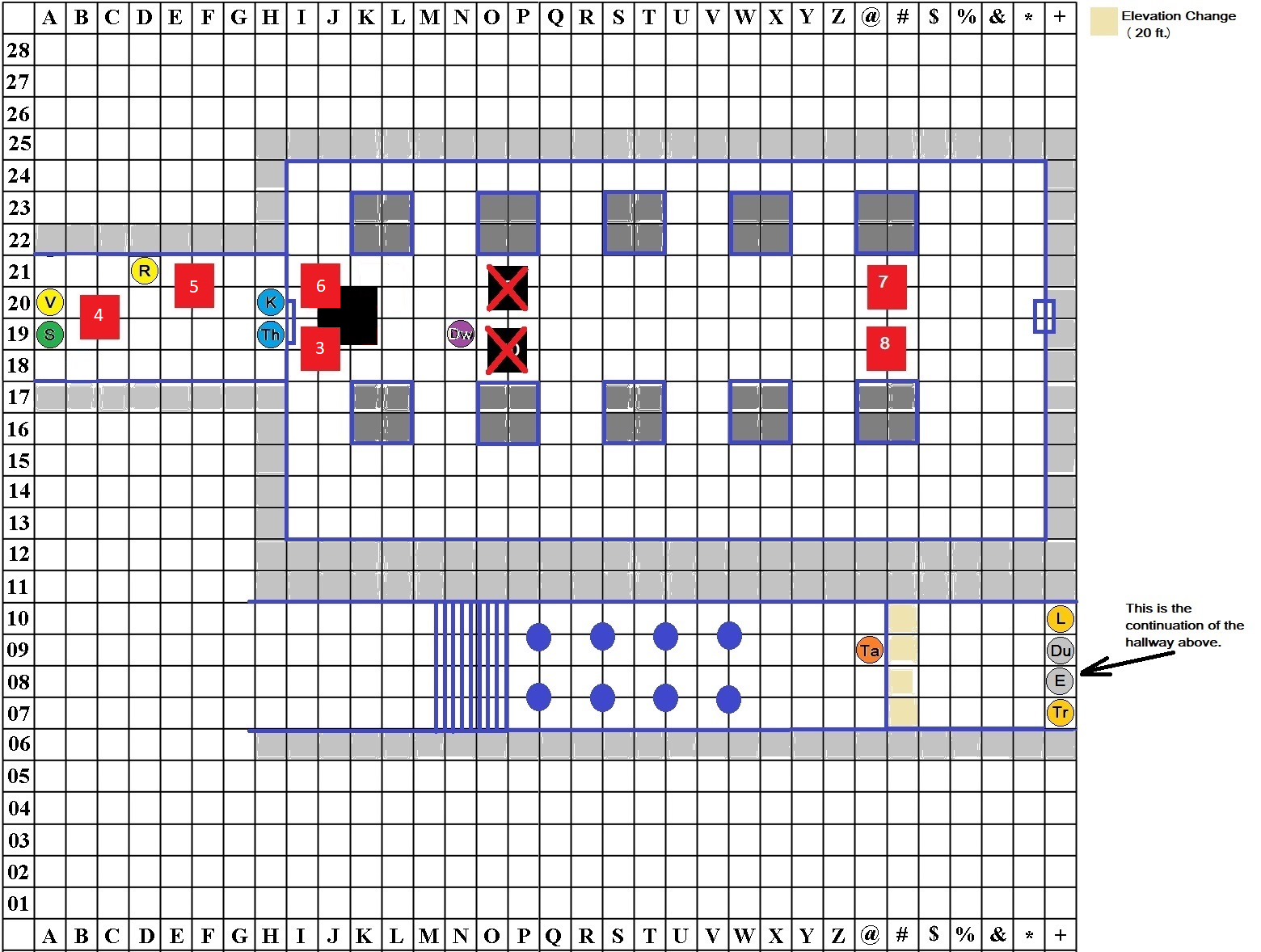 Fireball: 30 pts. damage.
Thallok AoO: 31 pts. damage.
This turn, continues to burn: 3 pts. dam.
TOTAL DAMAGE: 64 pts. (Moderately Wounded)
Two of the Sphinxes dart into the air, and fly down the hall, seeking enemies to rip apart; on their way through the narrow doorway, Kleborn and Thallok deliver serious blows to each of them, their magical weaponry showering the hallway with sparks of energy, as their powerful magicks rip and tear at the negative life force of these monsters!

Sphinx #04 attacks Sylvar, the originator of the Grease spell which caused the flames that were still clinging to its body. But as it lands in front of the nervous bard, Lenny and Travis release their fire breath, burning the monster still further!!

Sphinx #03 attack roll: d20+14 [slam]: 18 (miss) T
Sphinx #06 attack roll: 17 (miss) K
Although both Sphinxes are formidable opponents, they prove unable, at least in the beginning, to find purchase against the superior skills of the party's frontline warriors; Thallok uses Mirios to parry his opponent's clumsy attack, and the Sphinx on Kleborn is stopped cold by the warrior's mithral shield.

VALE: It's your turn! Val is glowing a bright blue, and vibrating in your hands, anxious to bite into its first undead in over 3 centuries! What do you do?
Last edited: Sep 29, 2019

VALE ATTACKS!!!
With fury and vigor matching his magical axe, Vale pounces at the Sphinx, slashing up toward its neck, and then downward toward its mangled bandaged undead paw. Both strikes appear to connect with their targets. As Vale strikes the mummified creature, calls upon the strength of his pantheon of deities as he engages in his purpose: killing undead. All of the frustration of dealing with Margull, as well as Respen's benefactor, and the axe's ego combine in what can be best described as cathartic relief. These filth will be dispatched, or he will die trying.

Having just been burned by the Twins, the Sphinx is not ready for the fury of the axe; Vale's first blow cleaves the weakened beast in twain, causing its negative life force to vanish is a flash of blue light. But unlike Dewydd, Thallok, and Kleborn, whose attacks ended with a bright, outward flash, the axe actually draws the light BACK INTO ITSELF, like some sort of singularity, with an eerie sucking sound that instantly lowers the surrounding temperature in a 20' radius by 2 degrees Fahrenheit! The shift in temperature is not enough to cause damage or discomfort, but it is chilling, nevertheless! And unlike the party's previous kills, the remains of this Sphinx disintegrate into a pile of fine ash!

Sylvar, you suddenly realize that you have just witnessed something of legendary proportions! It seems that Valoran is no ordinary enchanted, talking axe! You can FEEL waves of magical energy emanating from it, as it devours the Sphinx's negative energy life force! This axe is truly a force of nature!

Val SINGS in Common: "Great their power grew, a thorn in the eye of The Father, swift was the axe, and true, to fell them one after another!"


SYLVAR: It's your turn! The Sphinx that injured you is no more! What do you do?

The first arrows he fires in haste, without properly aiming and it misses it's target. The other two shots are true and hit their mark.

As the two, glowing arrows slam into the Sphinx, it rears its head in agony, as the banal magical properties of the arrows, fueled by Sylvar's hatred of the Undead, take their full effect upon the creature's life force. Blue, electrical energy surges through the Sphinx, and there is a sudden, flash of light, as its life force is completely disrupted!

As the Sphinx's life force flashes, it is tugged upon by the axe, and a howling sound is heard, as the axe attempts to draw the life force into itself; however, the light escapes the pull of the axe and dissipates, going on to its final rest, wherever that may be.

Val curses, "Blast it! Now the Nine Hells have yet another soul to twist toward their fiendish enterprises!"


RESPEN: It's your turn! What do you do?

Respen considers throwing a Fireball, but he dares not while Dewydd is in the way. Therefore, he opts for a single-target fire spell instead: Kelgore's Firebolt. He chooses Sphinx #06 as his target.


Respen's Fear saves (DC19): 33, 28 (Saved)
Reflex Save DC 14: (12) Failed.
Base Damage: 20 pts.
Fire Vulnerability: x1.5
TOTAL DAMAGE: 30 pts.
Sphinx #06 has taken a total of 56 pts. damage.
Sohinx #06 is Moderately Wounded.
The Sphinx is unable to dodge the firebolt, and screams with agony as the deadly bolt slams into it, burning it savagely! It is quite obvious now that fire is a major weakness for these creatures.

DEWYDD: It's your turn! The Sphinx to your right is on fire, and looks to be suffering badly from Respen's spell. What do you do?
Last edited: Oct 8, 2019