It occurred to me just now, that you can always see magical auras. As you approach the former spot of the oasis, to talk and plan with the rest of the party, you notice that this latest key has a strong, magical aura. Remember, all of these keys are shaped like triangles; they are all 4-inch golden triangles, with a Horus eye engraved in the center on one side, and the proper name of the key written in Draconic, on the back side.

You surmise that the keys may have more than 1 purpose; i.e., each of these keys might have other functions, other than their function as keys. You might want to identify one of them.

Before anyone flies off or does anything, Tam steps before the strange fellow before them and announces himself:
"Hua Xao, my name is Tamartamlin Quickfoot: jeweler, treasure hunter, adventurer, wolf-rider, giant slayer and also a newcomer and boon companion to these warriors and wizards, druids and danger-seekers. It is a pleasure to make your acquaintance. "

Tam then runs to Lathir and gives him a flying hug.
"LATHIR!" Tam cries in joy and wonder at seeing him. "I've missed you."

Vale looks at the axe in amazement. He's never been THIS snarky before!

Vale looks at the axe in amazement. He's never been THIS snarky before!
Click to expand...

Xao is about to shake Tam's hand when goes rushing off. Then upon hearing the Axe speak, he quickly checks his belongings and makes sure he hasn't been pick pocketed.

Dewydd
"Well done you two,"
I compliment the twins. Travis nods and Lenny acknowledges it with a grin. Looking to Xao I give a grin of my own. "It seems we've found the key! Now I think it's safe to say we'll be able to exit the room once everyone completes their greetings. Lathir is a companion of ours that went off to do some research on his own. I hope we get to hear what he's uncovered!"

"How goes things, Lathir?" I ask, an amused smile for Tam's displayed excitement playing at my lips.

(Forgive the delay...Respen's actions occur at appropriate times)
Respen:
"Well met, Hua Xao. Pleased to have you join us. My name is Respen Coraellus of the Enllaves plains, Mentee of Laramon of Dyvers, and quested by Dame Clare. That is why I am here. My friends, and I am grateful to call them such, are here to make my quest their own. Should you join us, I shall remain in your debt, as I am to them. <he chuckles> As it is, if I am to repay my debts to them, and I have an elven life to do it, I shall never die."

He winks back at Sylvar for the Respen's Raiders comment, "Ever the entertainer, my bard friend." Respen clearly has an affection for his elven kin. Despite vastly different backgrounds, their share the blessing and curse of elven history and longevity. He laughs at Xao's reaction to the axe's comments vis-a-vis Tam. "Don't let his size fool you. He is a mighty hobbit who I have seen fell much larger creatures than he...with regularity."

To Lathir, "My friend! I am pleased to see you again. I was despondent you left us, and I am grateful to you for your return."

He watches Lathir recover the key. He observes the magical aura of the 'water' as well as the key. His face suddenly becomes alert as if he's discovered something, or remembered it. He reaches into a pouch on the top flap of his backpack, and retrieves an eyeglass on a silver chain from the pouch. To Respen (and anyone else who sees it), it glows with a swirling magenta and blue light. He puts the eyeglass to his eye, and he examines the key closely, whispering something in elvish and touching a notch on the edge of the silver frame of the eyeglass.

With a wry smile Xao says, "Well met to you Respin and your .. .. ..Raiders. So there is a quest. Since I do not know where in the lands I am and getting back to where I was is seemingly out of the question, I accept your invitation to join this quest. How is every one on water? Food?" 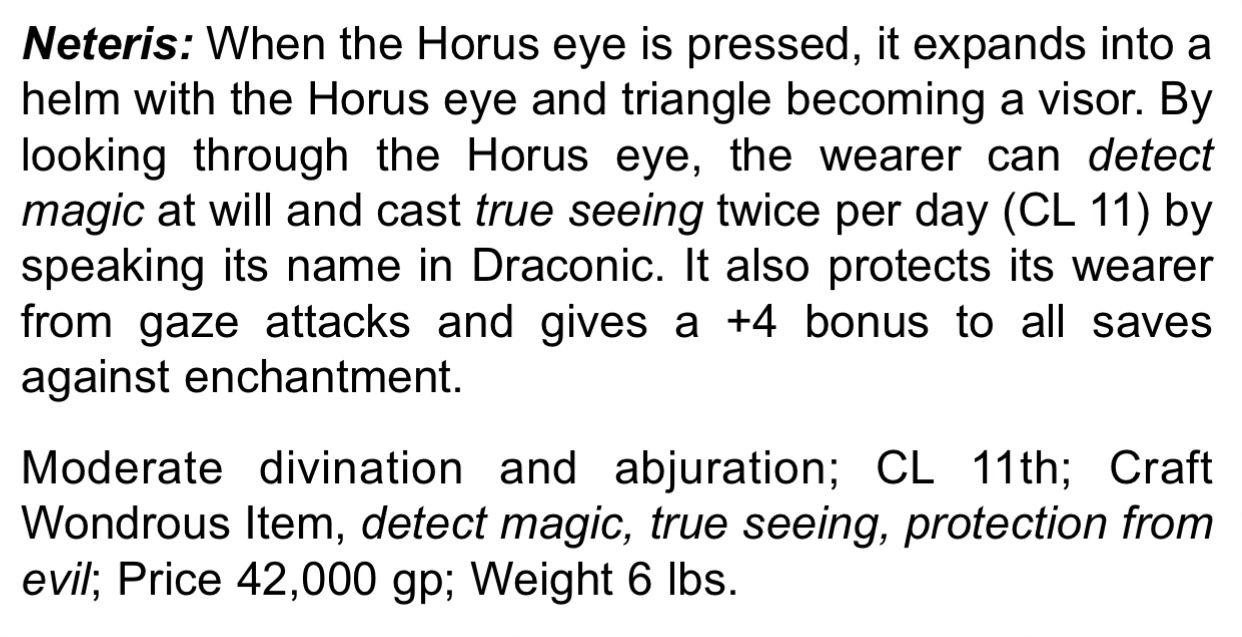 Respen:
Realizing the magical significance of the keys, he requests to see the other keys, explaining what he has found. “I lack the magical preparation at the moment to ascertain the other magical keys’ properties. Perhaps one of you can assist?”

Sylvar says, "Yes, I remember now. I've heard of these keys before. Two things are certain:

1. Pressing the Horus Eye on any key causes it to take its alternate form, and pressing it again causes it to revert back to its key form.

2. Saying the name in Draconic causes the key to activate its special power.

What the forms and powers are, I haven't a clue.

But I do know that Khubsheth himself made these keys, hence their double-use as magical items; it's like he knew that one day, whomever sought to unlock the Queen's tomb in order to vanquish her might need some magical assistance.

Therefore, I suspect that once the keys have been used to unlock the pyramid door, they can be removed and used as magical items. How generous of him."

Thallok accepts the key when it is offered to him by Respen. He places one hand beneath the rock it's still stuck in, and with the other hand, he presses the Horus Eye, using his thumb.

Thallok is caught by surprise when the rock EXPLODES, sending pebble fragments everywhere! Thallok is unharmed by the explosion, but he gets very dusty and dirty from it. Everyone nearby also gets pelted by pebbles and sand, but not hard enough to suffer actual damage.

When the dust settles, the key has transformed itself into a helmet, with the Horus Eye and triangle becoming a visor. Everyone's immediate guess is that the helmet probably provides several vision-related powers. Exactly what those powers are, remains to be seen.

Thallok hands the helm back to Respen, "Looks like it turns into a helmet. I wonder if it helps you see better?"

Hua Xao said:
With a wry smile Xao says, "Well met to you Respin and your .. .. ..Raiders. So there is a quest. Since I do not know where in the lands I am and getting back to where I was is seemingly out of the question, I accept your invitation to join this quest. How is every one on water? Food?"
Click to expand...


Kleborn is the first to speak up, "We're ok for probably 3 or 4 days, then we might need to start worrying. Of course, the cleric here, Vale, can create food and water simply by praying to Clangeddin."

He returns the handshake, but checks all of his belongs right afterwards. he glances at Tam, then the ax, then tam again.

Lathir smiles and shakes his head at the inquiry of the Xao. "The axe is prone to grandiose verboseness and unnecessary discourse. My guess is that it does not appreciate being a tool."

To the party in general he asks, "So, do we just walk back out of here now that the puzzle is solved, the trap is beaten, and the illusion is gone?"

Kleborn replies, "Tam is VERY trustworthy. He has never stolen a single thing from any of us. He stood his ground bravely in the fight against the Council of Giants; and he is responsible for the final arrow that dealt Prince Delliak of the Cloud Giants his ticket to the afterworld. The axe, Valorian, or Val for short, is always cantankerous and curmudgeonly, although I've never seen it QUITE this negative before. Very strange."

"This whole place is a trap, so I don't want to be here if someone else shows up." He glances to the door and then continues,"she might have more trouble beyond that door, but I have no idea what. She is quite insane and unpredictable, not to mention enjoys torture."

Lenny, the older twin by one and a half minutes, chimes in: "The door is how we got here in the first place. It leads to a super-long hallway, designed to eat up the duration of protective spells simply from its length, and the time it takes to traverse it. These trap areas look as if they were meant to test the mettle of whomever sought to confront the queen. Apparently, the queen is of such strength, that only the bravest, most resourceful group could possibly challenge her. At any rate, the guardians of these trapped areas probably volunteered to remain, and ensure that only the most worthy could pass them; but it seems that they have all been corrupted, and now serve the queen, instead of Khubsheth's noble purpose. I suspect that the traps were once far more survivable, but as time passed, the guardians perverted their purpose, turning them into deathtraps. As it stands, we have now passed three of the tests, and have one more to go. The door, if it's now unlocked, will allow us to return to the central chamber, where we can open the final door, and take the final test."

"Ah, so there is a central chamber within. Before we continue, I must ask who amongst you is the most astute in the Arcane arts? I have an urgent matter to reveal before we continue."

Dewydd
"That would definitely be Respen. What I know of the arcane arts, I picked up merely to continue being able to fight on the frontlines instead of quietly retiring after my injury,"
I reply, nodding toward Respen. "His capabilities are actually what caused me to become interested in the arcane."