Supporter
Tam steps forward, and upon reaching the doorway, and searches for traps.

Xao stands at the ready to leap to assistance if needed

In a little more than 20 seconds, Tam searches the first 10 x 10 section of the hallway... and finds nothing.

Val, the talking axe, speaks up: "What are you idiots afraid of? A 10-ft. pit of spikes? A pool of acid? I thought this group was comprised of heroes and risk-takers! You're acting like a bunch of young paiges! Let's get on with it, shall we?"

Xao rolls his eyes and says to the Axe Whole, "I am actually in agreement here, Val." He takes off after Tam has cleared the portion of the hallway.

Move at double speed down hall

Dewydd
Looking to the others, I watch Xao rush down the hallway for a moment and a grin spreads across my face. "They say fortune favors the bold, but I've seen misfortune occur in equal measure... ah well!" I conclude as I fly after Xao.

The twins exchange a glance and a shrug before flying down the hall too.

This bold move on Dewydd and The Twins' part begins an avalanche of "follow the leader." In only a short while, the whole party traverses the long hallway, coming to a stop when they see an open door, made of a clear, unknown material, and the well lit room beyond. 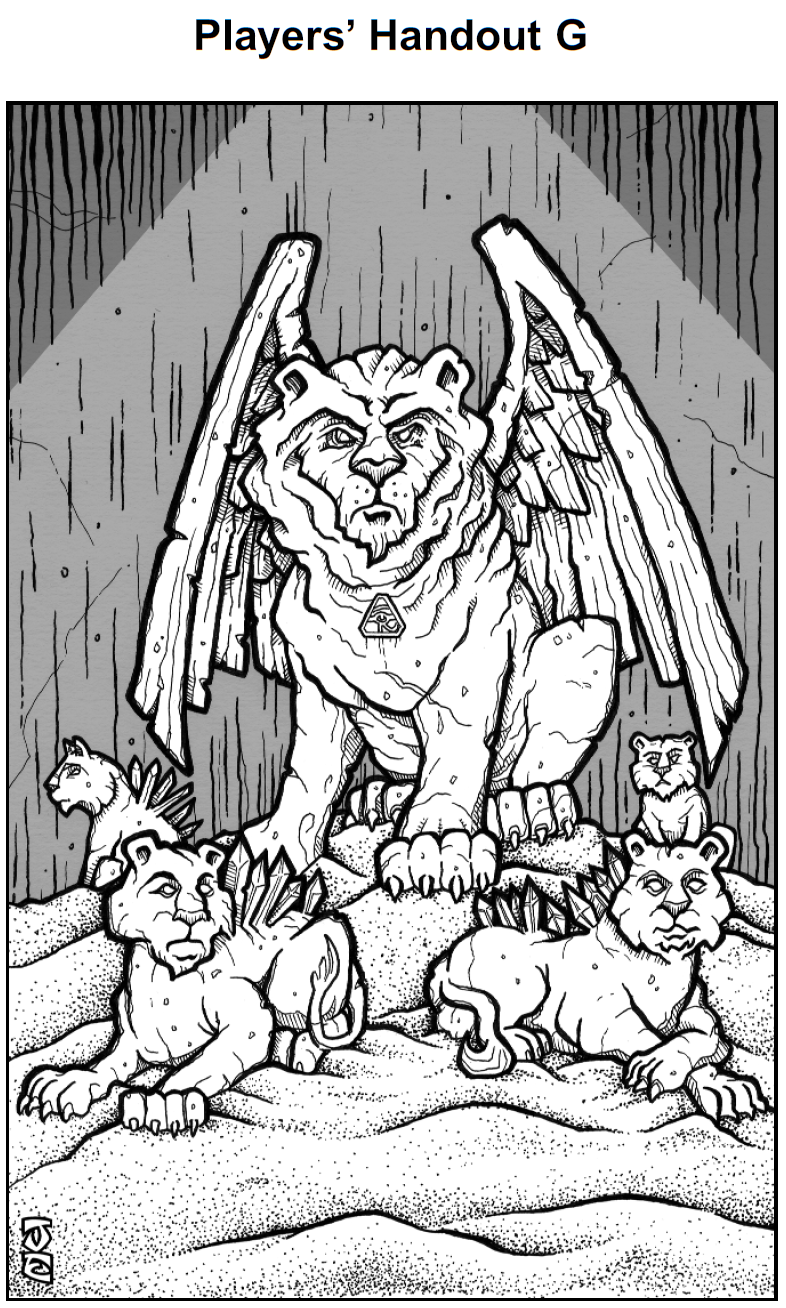 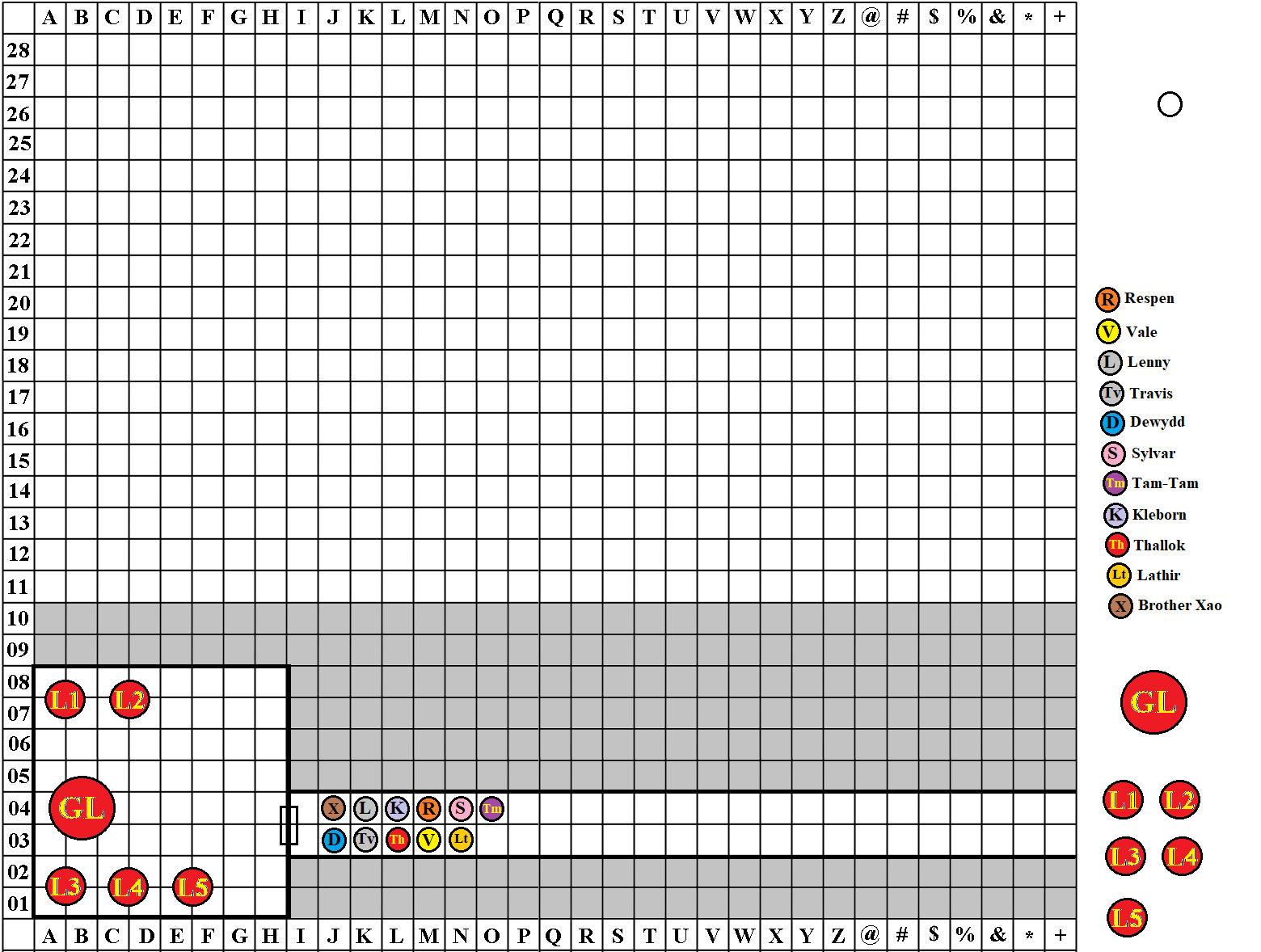 EVERYONE: The "lions" have yet to make any hostile actions. They simply stare at the party, blankly, and without interest. What do you do?
Last edited: Jul 26, 2021


You have never seen, or heard tell of a creature like this before. The best that you can figure is that these lion-like creatures are the Queen's creation, part construct, part elemental. You have the bad feeling that there is more to them than is readily apparent, and that facing 6 of these things is tantamount to suicide. The room is tiny, and the creatures are BIG, and you don't like the thought of that door slamming shut, and trapping all of you in there with them, in close-quarters. Everything about this situation seems wrong. But there it is, you goal, the last key, embedded in the big one's chest. The "solution" to this puzzle is obvious, but you doubt the survival rate of some of the weaker party members, including yourself.
Last edited: Jul 26, 2021

Sylvar addresses the group "Gentlemen it would appear to me that these are partly elemental and partly of the queen's making as I have never heard of, or seen, anything like them before. This queen has quite the imagination.

I am no tactical genius, but I believe that engaging the beasts in combat in such a confined space would be suicidal. Might I suggest other than violent means to deal with this particular challenge?"

Val perks up, and says, "This whole tomb is a suicide mission. Since the key is embedded in the creature's chest, I doubt there's a non-violent way to remove it. But perhaps we should look for a way to keep the door open? It's open right now, and they haven't made a move to leave their room or to attack us. I would imagine that if we start fiddling with the door, that may change, but if the object of the test is to trap us inside the room, then the creatures attacking us while we're in the hallway doesn't make much sense. So maybe fiddling with the door WON'T provoke them... it's hard to tell."

Tam says, "I don't see where the keyhole is. It might be in a different place than normal. But if I can't find it, there's no way to know if I can jam the lock or keep it from shutting on us. Sorry guys."

The axe makes is speaking sense. We should find a way to keep the door open.

Kleborn looks around, and says "Come on, we can take them!" He then looks around again, looking at the space they are in, and then looks at the stone lions again and then says "...but I am open to a more diplomatic less messy approach. I wonder if Thallok or I can hold the door open?"

Lathir shrugs. "Vale, maybe you can lay the axe on the ground, wedging the blade toward the jamb and the butt toward the door. It may hold it open. On a completely different train of thought, I may have the best potential at a peaceable approach. I could just walk in and see how they react to me."

Supporter
Tam watches.everyone pass him by and realizes that, so far, his actual rogue skills have not been really needed.

Thankfully, his father's training in the halfling guard has come in very handy, along with the recent outlier training.
He has no suggestions as to how to proceed against these bizarre creations/creatures. As a matter of fact, after the giant stronghold, none of this has been in his toolkit of knowledge and experience.
He gladly leaves the plan of attack to the senior members of the adventuring party.
However, being the type that hates to be left out of anything, he mentions, as a mere reminder:
"If we are to attack, I do have a ring of invisibility. I might be able to help in that way. Maybe..."

Sylvar begins to think about ways to keep the door open...( Internal monologue) "Leomunds tiny hut might work if I could make it smaller, which I can't. I could summon a large creature to hold it open, but if we don't kill the lions in time the spell will dissapate." Then he has a thought, a good plan in his mind...although he doubts the axe will go along with it.

He walks up to Vale glances at the axe and states as a point of fact,

"You know, many door stops that I've seen are shaped like your axe head."

Judging by the strength and schools of the magical auras, and knowing so much (as you certainly do with a base +25 check!) about magical arcana, you can tell that the TRUE strength of this door lies in the situation where the door has closed shut. Much like an Alligator's jaw, once this door closes, it's going to be Hellishly hard to get open again.

However, the way the auras are arranged, you can tell that the door doesn't need to be held open AT ALL!

The mere presence of someone standing in the doorway is enough to keep the door open. You figure that it must be part of the trap; the door doesn't close until everyone is on one side or the other. Remaining open would certainly give someone a false sense of security. But once the spell detects a clear doorway, there is probably a countdown, after which the door slams shut, locking the occupants inside for good.

If someone, the twins, perhaps, were to station themselves in the doorway, they could keep the egress open; of course, guarding the door in such a stationary position would make them a BIG target in melee combat.

Respen:
"So this is what I observe..." He provides the information from his inspection and knowledge related to this clearly magical door.
"Time to deal with these creatures. Twins! Use your shields and dragon breath (see what I did there?) to protect yourself, and under no circumstances leave the entrance to this room such that the door remains ajar. We shall attack in force. If the creatures attempt to split us up, don't bite on it. Focus on the the big one first, and then the smaller ones, one at a time. Should you be in distress, call out, we will get you to other side of the door. With any luck, they are magically tethered to the room. We can regroup if necessary."

He prepares several spells, one for Dewydd specifically. "If you are ready, Comrade. I plan to make you more formidable than you already are."
Respen prepares the spell in his mind, and will deliver it to Dewydd before he readies his attack. (Greater Invisibility).

The biggest of the Lion creatures speaks, "You adventurers are all the same. You mistake our politeness for ignorance. We aren't sitting here, silently, because of complacency or instruction; we're sitting here because we want you to be truly prepared when you face this test. Every party of adventurers that has ever come against us has always done as you are doing now. Prepping spells, examining the door, and so on; I've never seen a party brave enough to simply step inside our chamber, and face us like real men, mono a mono, hand-to-hand, skill against skill alone. You are all sniveling cowards, wanting every possible advantage, so great is your fear of death. Why don't all of you just step inside this chamber, and dispense with the formalities?"

Lathir takes a deep breath, shrugs, and walks into the room.