Welcome to the Narrows!

Got some new map-making software and was playing around with it - this is my first attempt at a map for it.

"The Narrows is a small strip of land, perhaps 250 miles long upon an isthmus between two greater regions. To the north lies the vast Grissom Sea, while its south empties into treacherous and cursed waters known as the Froth. The value of the narrows is two-fold, as provides an easily defended land bridge between the eastern and western kingdoms, and is a well-used trade route for caravans between the two nations.

Most prominent in the Narrows is the northern town of Stillwater. Home to approximately 10,000 souls it is a land and sea hub that has greatly benefitted from its position in the Narrows. Open trade is practiced freely throughout the town, and many traders aspire to own villas in the subtle hills at the back of the city. Pirates are semi-common in Stillwater, their power rising and falling in spikes and valleys as they perplex the greater powers to the east and west.

Second largest in the Narrows is Stonebridge, a defensible town of approximately 5,000 individuals. Stonebridge's mighty walls were mined from the southern mountains and it is considered the gateway to the eastern kingdoms. Though trade passes through it, it is best known as a garrison for the Feathered Riders, the elite cavalry corps of the eastern realm. The Feathered Riders use the open plains north and west of the city as their training grounds, leaving the area well-patrolled against banditry.

Next in size is Terrence, a semi-lawless gathering where those who fit in neither the west or the east make their home. It is a hub of approximately 3,000 individuals, with many travelers from the coastal fishing villages bringing their catches here to be sold in markets to the east and west. Terrence is known for its gangs who also double as the town's law force; it is not uncommon for those passing through to be extorted for safe passage through to the east or west, though the gangs have learned to avoid shaking down the monks of Norgammar.

The smallest notable town in the Narrows is Woodby, a small town of only 2,500 or so individuals who are a mix of woodsmen and miners. Woodby's inhabitants are no-nonsense, tied up in their works of lumbering the nearby Bristol Woods or mining the Black Mine. It has a fair number of retirees from each such profession, and the town is defended by an active volunteer militia seasoned by putting down threats to the town.

The Black Mine is a deep and rich iron mine at the foot of the Blackspear Mountains. The rich, dark iron brought up from this mine is highly prized both in the Narrows and beyond. It is so easily enchanted that a simple smith humming a tune over the steel is said to be able to produce magical objects from the material. As such, the Black Mine is perhaps the most heavily guarded and protected area in all of the Narrows. Special caravans move the steel fortnightly from the mine and not even the vicious gangs of Terrence dare to disturb the secretive and heavily armed wagons they are hauled away in.

Beyond the towns of the Narrows are two great fortresses. Castle Vangue was built over a hundred years ago by the western kingdom to defend the Narrows, though it has become independent of either power. Now held by a council of paladins, Castle Vangue keeps its eye on the activities in the Narrows and sallies forth with a small force when dangers rear their head in the realm. They are careful not to be too aggressive to avoid repercussions from the western or eastern kingdom, and they have developed a mutually beneficial working relation with the Feathered Riders of Stonebridge, and a small brotherhood stationed at Nordgammar.

Telleron Keep is the second castle in the Narrows, and only fifty some odd years old. It began as a fall-back point for the miners of the Black Mine, but has recently been overtaken by a exiled baron from the eastern realm. Over the years, a hamlet has grown in the shadow of the mountainous keep, and there are dark whispers that something foul now stirs in the castle's depths. Despite the rumors, Telleron Keep has kept itself relevant in the Narrows through trade and a supply of exotic spices not otherwise found in the land.

Another place of note is Norgammar Monastery, commonly referred to as Norgammar. This great, fortified temple grounds sits at the edge of the White Woods, and its central stone lies where legend states that the foot of the goddess Nord stepped upon the waters, from which the Narrows itself arose. Norgammar is not only a point of religious pilgrimage, but a safe haven for travelling caravans as well. A large market has arise near the temple, as well as a small town of approximately 1,000 people. While most of the monks of Nord are ascetics, the intrigue and danger of the surrounding land has brought forth a militant branch of the church. Furthermore, this militant branch is not content to remain at Norgammar, but travels the Narrows in small groups, rooting out evil where they find it. As such, the Nordian monks have a positive relationship with the paladins of Castle Vangue, and are respectful of the Feathered Riders, and have a standing advisor at the latter.

The Greystones is a failed city to be found on the southwestern coast of the Froth. Once the greatest city in the Narrows, it was destroyed in a cataclysmic war between the eastern and western realms nearly 300 years ago. Its end came by magic, but it is not known by which side - nor which side owned the original city. The festering ruins and its surroundings are a blight on the area, and creatures hostile to civilization prowl its empty streets.

Staff member
Nice! What software is that?

Morrus said:
Nice! What software is that?
Click to expand...

is an intuitive yet powerful fantasy map creation tool for 64-bit Windows 10, Linux, and MacOSX.

You can find lots of example and help on the reddit here: 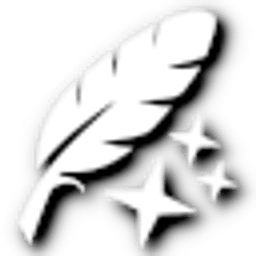 r/wonderdraft: A community dedicated to the Wonderdraft map making tool for fantasy worlds.

Here's a map I made with it based on an old AD&D campaign: 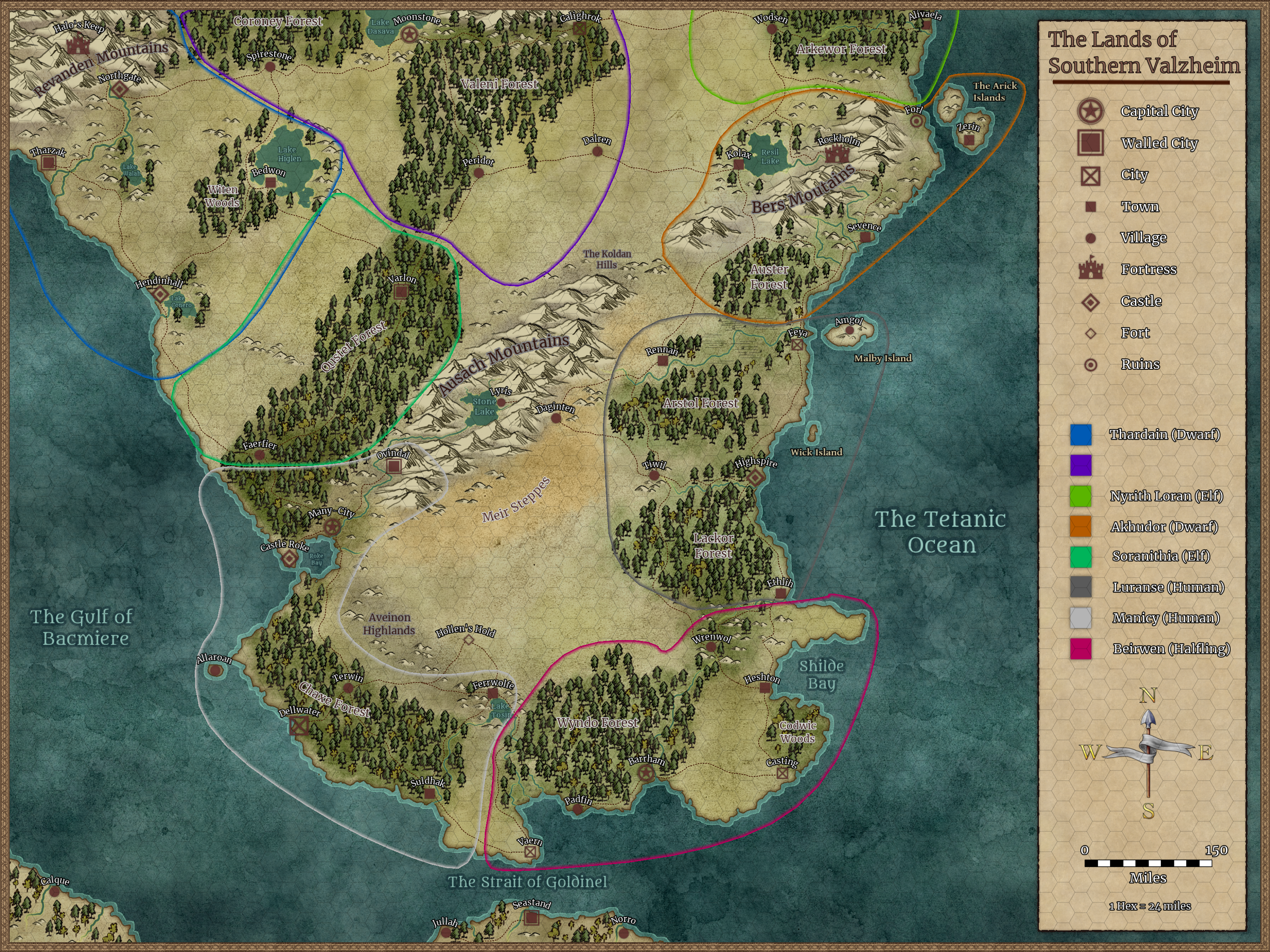 And a different style for my last D&D campaign. 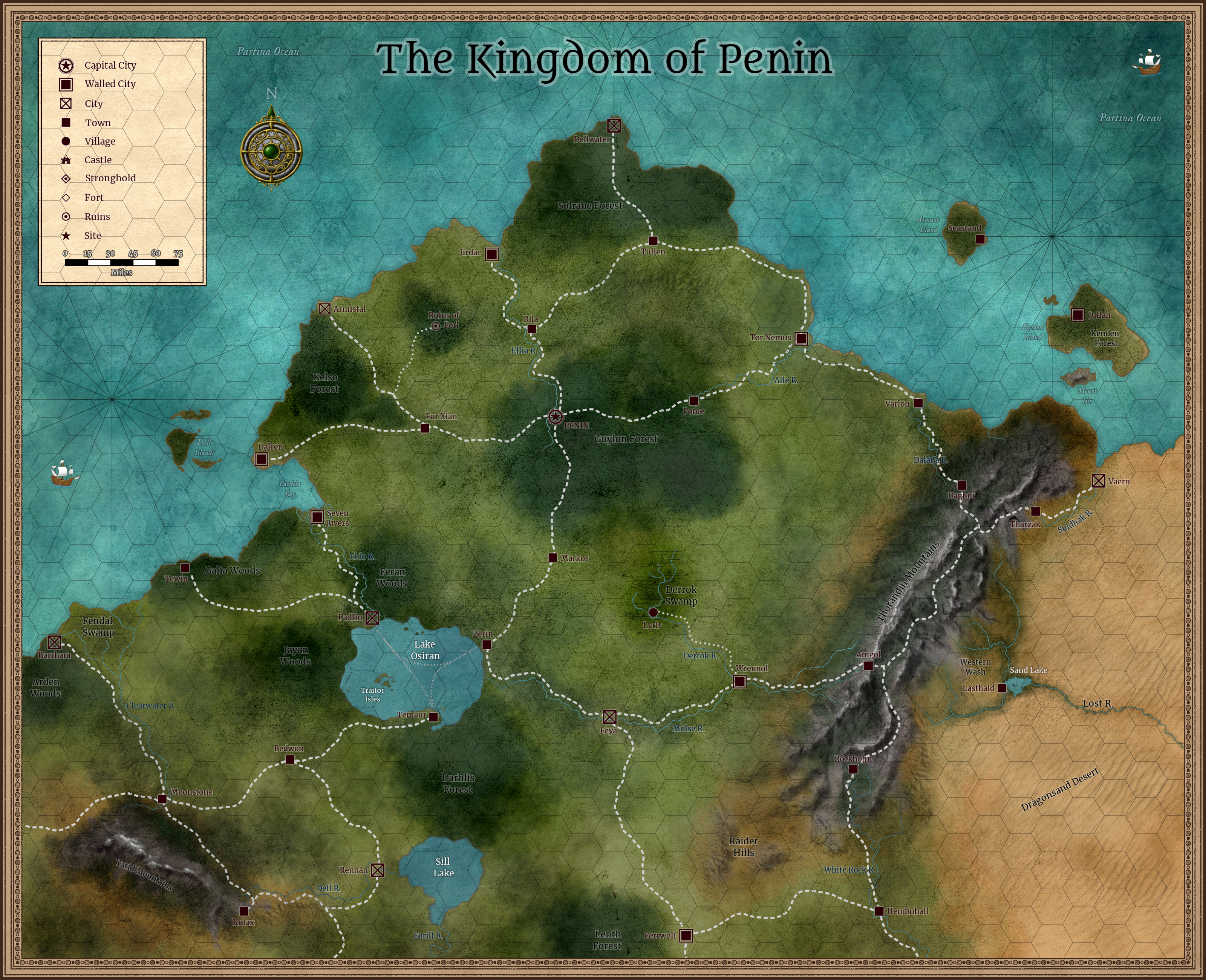 Okay, where did you get the assets for those maps? As best I can tell, they're not part of the default assets. I'm still new to this program, I used to use Profantasy's Campaign Cartographer, but that now seems old tech.

Stormonu said:
Okay, where did you get the assets for those maps? As best I can tell, they're not part of the default assets. I'm still new to this program, I used to use Profantasy's Campaign Cartographer, but that now seems old tech.
Click to expand...

The second map uses Mazlo's assets, which are more topo in style and my favorite. I have seen some super-life-like maps with it. You can find his patreon page here:

Become a patron of CG2A - Mazlo today: Get access to exclusive content and experiences on the world’s largest membership platform for artists and creators.

D&D General Where has the antiquities dealer gone?