Like so many of the plastic monsters pulled from obscurity as patchisaurs, the owlbear has become iconic. But unlike the other monsters who we can easily trace to kaiju from the Ultraman series, the owlbear's roots may go much deeper. 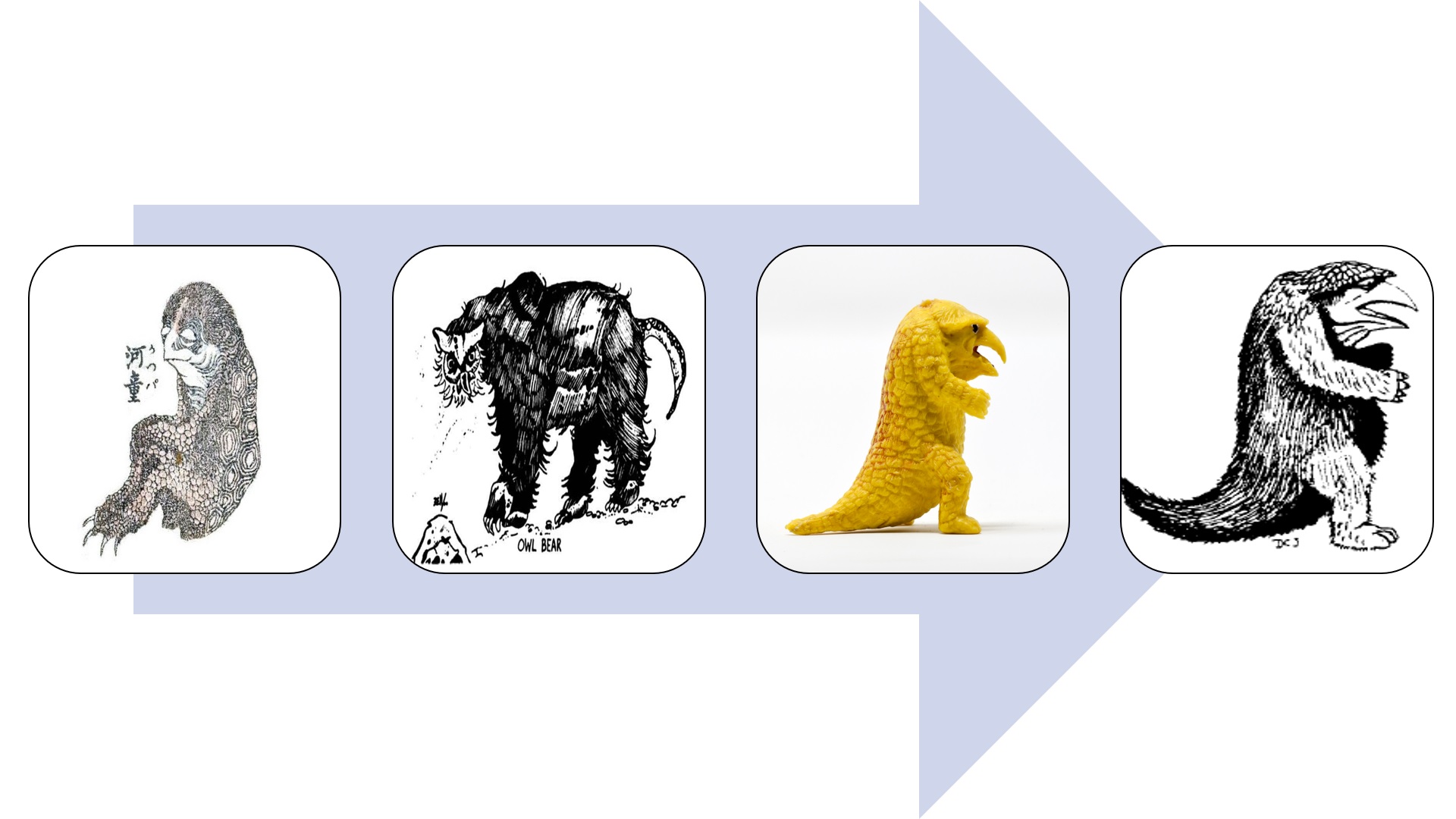 Monsters, and Owls, and Bears

Art & Arcana explains the origins of these plastic monsters:


In the mid-1970s, physical props began to directly inspire visual elements of D&D. We know from his 1972 interview in Wargamer’s Newsletter that Gary Gygax said he played Chainmail with “soft plastic ‘horrors’ ” and “plastic prehistoric animals” from the start, but in the first issue of The Dragon, we see a monster illustration by Dave Sutherland plainly influenced by one of those miniature figures: the slow-witted, roughly bullet-shaped bulette, sometimes known as the “landshark.” Others would follow a year later in the Monster Manual, where Sutherland depicts a rust monster, which bears a striking resemblance to a plastic horror often found in the same packet as the prototype bulette.
However, the original appearance of the owlbear doesn't match its later appearance:


The strangest case is perhaps that of the owlbear. Like the rust monster, the owlbear was introduced in Greyhawk, but while the rust monster has no illustration in Greyhawk, the pamphlet does contain a portrait of the owlbear. The 1975 Greyhawk image looks nothing like the later version done two years later by Sutherland for the Monster Manual. Sutherland’s rendition clearly used one of the plastic horrors for its model.
The owlbear's final form was more bipedal bear than ambulatory bear:


The owlbear is depicted as an eight to ten foot (2.5–3 meter) tall cross between a bear and an owl. According to descriptions in Dungeons & Dragons source books, owlbears are carnivorous creatures, famed for their aggression and ferocity; they live in mated pairs in caves and hunt any creature bigger than a mouse. They use a "hug" and their beak to attack. In the game's third edition, it was categorized as a "magical beast".
In an interesting twist on the plastic origins of these monsters, the owlbear didn't look like its inspiration. But what was the inspiration behind the patchisaur?


Tim does not initially list the Owlbear originating from this bag of monsters, though it was available in the set at some point (Tim later confirmed this through our correspondence). In my year of scouring the internet and watching eBay auctions I have only seen this yellow version.

Chandra Reyer picks up where DiTerlizzi left off:


Owlbear is a bit of an oddity. The toy is tiny, very crude and probably made from a worn out mold made from the original toy. It looks like it has ears or horns that are swept back, which causes the odd look of a toupee. It looks furry and hunched over. The pointed maw has a weird raised bridge. As a result, it’s original Ultraman monster is not as obvious as say Bulette’s. It wouldn’t be a rare kaiju, to appear in the drugstore dinosaur packs so often, it would have had to be popular. Plus, there wasn’t an idea of collectors and completionists in the late 60s when the original toys were made. Only a few of the most popular, memorable monsters would have been made into toys.
Reyer theorizes that it's Gomora:


Gomora has the right body, and a beaky mouth. The connection isn’t obvious, because Gomora also has big head horns. Yet, in many of the photos from it’s cruder 60s version to modern versions and toys, Gomora so often takes on the pose and feel of the Gygax’s owlbear. Even the beak horn tends to be shortened or arranged so far pointing backwards as to give Gomora the same aquiline nose as the owlbear. The head horns in some perspectives, sweep back flat against it like ears, causing the neck to look like part of the head. Thus, I arrived at the object of my quest. Owlbear has always been a very crudely made, knock-off Gomora toy.
The Return of Ultraman seems to be the source of many of the creatures depicted in the toys, which gives us a clue as to what monster to pick from. Of the different Ultraman foes, Bemstar seems to have the most in common with the owlbear. Telesdon is also a possibility -- his posture is right but he doesn't seem to have any feathers. DMDavid has his doubts:


Some have tried to find a Kaiju that resembles the owlbear toy, but even the closest match takes blurred vision and a big leap of imagination. The toy’s bowl-shaped hair stands out as its most distinctive feature. As badly as the toy resembles an owl or a bear, it also badly resembles a Kappa from Japanese mythology.
And thus we get the likely origins of the owlbear: the kappa!


A kappa (河童, river-child)—also known as kawatarō (川太郎, "river-boy"), komahiki (駒引, horse-puller), kawatora (川虎, river-tiger) or suiko (水虎, water-tiger)–is an amphibious yōkai demon or imp found in traditional Japanese folklore. They are typically depicted as green, human-like beings with webbed hands and feet and a turtle-like carapace on their backs. A depression on its head, called its "dish" (sara), retains water, and if this is damaged or its liquid is lost (either through spilling or drying up), the kappa is severely weakened.
The kappa is described as:


...roughly humanoid in form and about the size of a child, inhabiting the ponds and rivers of Japan. Clumsy on land, they are at home in the water, and thrive during the warm months. It is typically greenish in color (or yellow-blue), and either scaly or slimy skinned, with webbed hands and feet, and a turtle-like carapace on its back...One peculiar trait is that it has a cavity on its head called a sara ("dish", "bowl", or "plate") that retains water or some sort of liquid, which is regarded as the source of the kappa's power or life force. This cavity must be full whenever a kappa is away from the water; if it ever dries out, or if its water is spilled, kappa loses its power and may even die.
The kappa seems like a good fit for an Ultraman series ... and it is, because several different kappa-inspired kaiju have faced off against the titular hero. But the only kappa kaiju that looks like a kappa is Kawanoji, who didn't appear in Ultraman Cosmos until 2001, much too late to inspire the patchisaur. Similarly, the Death Kappa movie came out in 2010. The only kappa-related monster that fits is King Kappa, but his appearance looks quite different from the patchisaur.

So Who Inspired Whom?

Given that patchisaurs were inspired by popular Japanese media at the time and that the kappa is an iconic yokai, it's not unreasonable to assume that the toy was based off of Japanese folklore. And that toy went on to become something different entirely, a creature with a title that roughly approximates its appearance without any of its fascinating and weird history.

Interesting - thanks Talien! And of course there's an actual kappa in AD&D OA as well!

I think Bemstar is actually a pretty fair match. Particularly in a crude plastic toy. 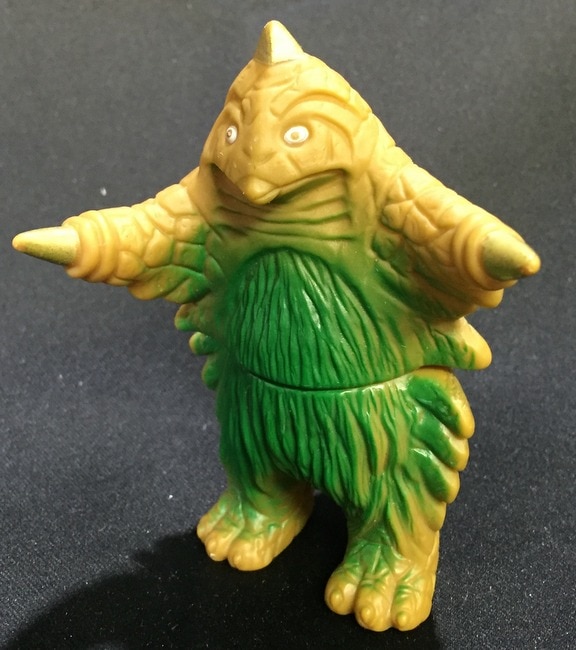 What's interesting is that Bemstar looks like the "final" form of the owlbear, not the toy it was based off of. The toy definitely had scales and Bemstar doesn't (and he has those weird claw appendages). We may never know, but thanks for sharing that picture I've never seen a mini-Bemstar!

talien said:
What's interesting is that Bemstar looks like the "final" form of the owlbear, not the toy it was based off of. The toy definitely had scales and Bemstar doesn't (and he has those weird claw appendages). We may never know, but thanks for sharing that picture I've never seen a mini-Bemstar!
Click to expand...

P.S. Now all I can see is a hook horror!

Zaragas is fully black but his posture and overall design has strong resemblance to the Owlbear miniature.