The Plastic Ancestry of the Umber Hulk

Gary Gygax is frequently cited as creating several iconic monsters in Dungeons & Dragons from a bag of plastic toys. But research has shown that toys came from a very specific source, Japanese knockoffs of giant monsters from the Ultraman franchise. Using the previous article as our jumping off point, we investigate the second creature on our list: the umber hulk. 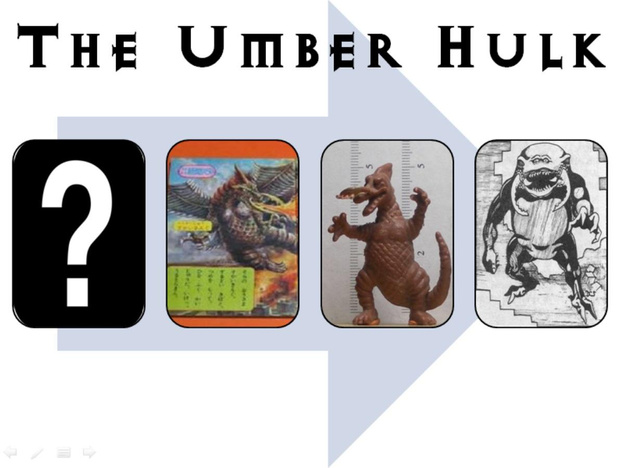 
Of shape somewhat similar to human, an Umber Hulk can be mistaken in the dark for something less deadly than it really is. Typically they are 8' tall, 5' wide, with heads resembling bushel baskets, and gaping maws flanked by pairs of exceedingly sharp mandibles. It travels about on two legs. If it is viewed squarely its four eyes cause confusion (save vs. magic or confused). Its claws are harder than iron, causing terrible damage when used as weapons, but they are used primarily by the beast for burrowing through rock (1 '/turn). They prize highly human flesh.
Throughout editions the umber hulk has remained relatively unchanged. They have gotten larger and more ferocious, but their ability to burrow, their giant mandibles, and confusion-causing eyes are staples that exist in every incarnation.

The original patchisaur that may have inspired the umber hulk is a curious bipedal creature standing upright, arms spread, covered in scales, with a dragon-like snout and two appendages protruding from its face. Its eyes were black dots that certainly stood out, which may have inspired the confusion ability.

The strongest connection to the umber hulk was that it was painted an umber color, although later iterations were bright red and white. Common wisdom cites the kaiju from Ultraman, Antlar, as the inspiration for the patchisaur. This is an easy association to make because Antlar looks a lot like the umber hulk in its final incarnation. But there is evidence of another possibility.

Famous D&D artist Tony DiTerlizzi is not convinced Antlar is the origin of the umber hulk:


Tim mentions the Umber Hulk also coming from this set. Some have speculated that this mandible-snapping dragon could be the inspiration, but given how closely the other monsters are drawn from their inspirations, I am not convinced.
The sonosheet picture above shows a clear lineage between the patchisaur -- a giant monster that may have been inspired by Ultraman but never actually appeared in the show -- and the patchisaur toy. Sonosheets were flexible records that were included in booklets, including sound effects and music that fans could play on their turnstiles.

Closer examination of the sonosheet shows that the patchisaur originally had wings and was capable of breathing fire. It looks a lot like a dragon, a connection which other fans have made about the toy.

The connection between the patchisaur and the umber hulk pivots on the appendages protruding from its face. For the umber hulk, the bristly things were interpreted as tusks. But the sonosheet tells a different story.

One kaiju candidate is Depparas, a walrus-like kaiju, but the timing is all wrong as that kaiju debuted in 1973, the same year the umber hulk did -- not enough time for a plastic toy to be created and inspire Gygax.

The blog 1/72 Multiverse submits Gomora as a possible candidate:


It is most likely that the umber hulk was derived from the kaiju known as Antlar (アントラー), but the Hong Kong toy does not bear much of a similarity to Antlar outside of the mandibles, and in fact looks more like Gomora/Gomora II (ゴモラ). As a side note, Antlar and Gomora appear together in episode 4 of Ultra Galaxy Mega Monster Battle, so maybe the patchisaur was somehow derived from that episode.
The timing is right: Gomora appeared in The Prince of Monsters, which debuted in 1967. There's even a red version known as Reionic Burst Gamora, but his "mustache" is placed behind his head, which doesn't match the description of the sonosheet appearance.

But if we stick with the dragon theme, Dodongo is a strong candidate, appearing in 1966. That said, it's a charitable interpretation to move the wings on Dodongo's back to its face. Dodongo has a breath weapon (smoke) that was never used in the series, which is a far cry from the fire displayed in the image.

We may never know the exact origins of the umber hulk, but it seems clear that the original incarnation had more in common with dragons than beetles.

Ran into an umber hulk playing through Lost Caverns of Tsojcanth at a con last year and it nearly wrecked us.

Of shape somewhat similar to human, an Umber Hulk can be mistaken in the dark for something less deadly than it really is. Typically they are 8' tall, 5' wide,
Click to expand...


I guess "less deadly" works, but anything with those dimensions would be on my "walk the other way" radar. That's grizzly bear height and five feet is enormously wide.

Von Ether said:
I guess "less deadly" works, but anything with those dimensions would be on my "walk the other way" radar. That's grizzly bear height and five feet is enormously wide.
Click to expand...


Yep. This monster, deep in a dungeon, elicited the first use of the iconic "Run away!" line in my game (happened in 1976 iirc, the movie was 1975 -- maybe). My players had all seen Monty Python and the Holy Grail of course... I laughed. They were too busy dumping things to run faster

I have a project where I'm creating a fantasy world by taking all the Pathfinder Bestiaries and placing the critters within on Earth, in places appropriate for their origins. These articles helped me decide where some of these weird D&D originals live: in Japan alongside oni and kitsune and yukionna.

Thank you for using the term "patchisaur" as opposed to the other word. The point I was trying to make in my blog was not that the patchisaur in question was Gomora, but rather that the artist created a mash-up of Gomora and Antlar for his illustration that ended up being made into the toy.

Oh my, I love Tony DiTerlizzi’s artwork. I’m getting Planescape goose pimples just looking at the umber hulk and wizard.

My Google-fu has weakened.

The process of creating a monster based on a random mini remind me of a designer project :

Does that ring any bells? I'd like to find if the project has been completed.

Blacksad said:
My Google-fu has weakened.

The process of creating a monster based on a random mini remind me of a designer project :

Does that ring any bells? I'd like to find if the project has been completed.
Click to expand...

Richards said:
Sounds like this: My Dad's Monster Manual


Thanks! That's it, and the project is still in progres.

The Plastic Ancestry of the Rust Monster

The Plastic Ancestry of the Bulette
2