It's common lore that some of the more iconic monsters of Dungeons & Dragons drew their inspiration from a set of plastic monsters mixed in with a bag of dinosaurs from Japan. Those monsters were not included by accident -- they were drawn from another show with quirky critters: Ultraman. 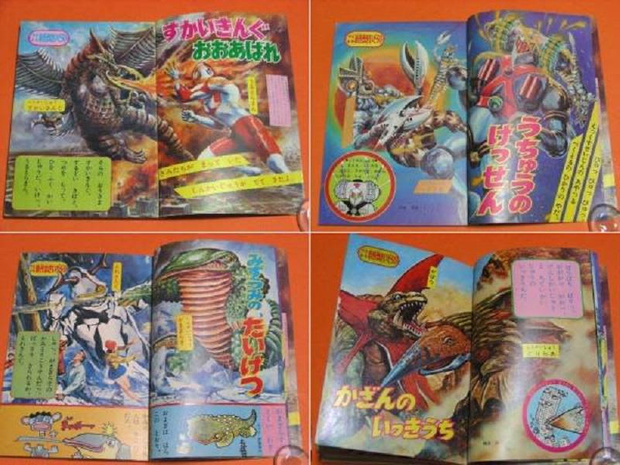 Kent David Kelly explains the origin of the monsters in HAWK & MOOR - The Unofficial History of Dungeons & Dragons: Book 3 - Lands and Worlds Afar:


... Gary also developed new monstrous challenges for his players by using completely unpredictable sources of inspiration. Beyond movies, fairytales and classic fiction, he also derived ideas for Dungeons & Dragons from plastic toys...Many of these iconic beasties seem to have come from the same source: bags of cheap plastic monster toys from the local five and dime store. These “Prehistoric Animals” were received from various manufacturers in Hong Kong, and many were actually rip-offs of copyrighted Japanese movie monsters. Their evocative and sometimes humorous appearances tempted a great deal of speculation about their strengths, weaknesses and special abilities. Gary noted that “various persons involved [in the Chainmail Fantasy play tests and later game sessions] suggested what they might be. Eventually, we created names and stats for all, and so the resemblance [to classic monsters featured in the Monster Manual] is no coincidence at all.”
The specific creatures were from a bag of toys included with dinosaurs. Although some are recognizable dinosaurs, some are completely alien creatures. Tim Kask, Dragon Magazine's first editor, explains on Dragonsfoot:


There once was an unknown company in Hong Kong that made a bag of weird animal-things that were then sold in what once were called dime stores or variety stores for like $.99. I know of four other very early monsters based on them. Gary and I talked about how hard it was to find monster figures, and how one day he came upon this bag of weird beasts. It might have had a sci-fi marketing hook. He nearly ran home, eager as a kid to get home and open his baseball cards.
These creatures, all iconic by D&D standards, created an entirely new category of monster. These aberrations included the bulette, carrion crawler, owlbear, rust monster, and umber hulk.

The inclusion of these creatures is no accident; they're "patchisaurs," toys molded after a type of Japanese giant monster known as kaiju. Patchi are off-brand knockoffs of popular toys, and in the case of patchisaurs they all hail from one source: Ultraman. The Clever Mantis blog explains them in detail:


...the term "patchisaur" comes from the Japanese "patchi", a term used to refer to bootleg or knockoff merchandise that came into use in the 70s, which was right around when patchisaurs came into being. Japanese was chosen because of the long-running theory that some of the "original molds" in the patchisaur family are inspired by or knockoffs of Ultraman monsters. As someone who's watched the entire first series of Ultraman, I can say that none of the non-dinosaur monster things found in the patchisaur line are straight rips from it, and I have seen enough merchandise of other Ultraman series to doubt direct theft from other early seasons of the show, but the aesthetics are definitely similar enough that they could be inspired by them. The figures are also occasionally referred to as "Chinasaurs" and "Ultrasaurs" but these names
By pinpointing the time when Gygax would have acquired the toys (late 60s early 70s), most patchisaurs were in fact from Ultraman or derivatives thereof.

Ultraman's nearest analogue to American comics is probably Green Lantern. Like Green Lantern, an alien crash lands on Earth and bestows the ability on a human to transform into a similar form -- in this case, Ultraman, a martial artist alien who could grow to huge proportions to battle similarly-sized kaiju. Ultraman featured kaiju in the 60s before Godzilla made them mainstream, and it was this popularity that inspired patchisaurs. The picture above is from a sonosheet. Pink Tentacle describes sonosheets in Japan:


In the 1960s and 1970s, Japan saw an explosion in the popularity of sonosheets -- cheap, flexible phonograph records printed on thin sheets of vinyl. Widely available from a variety of publishers, the most popular sonosheets featured theme music from TV anime, manga and tokusatsu, and they often came packaged inside booklets featuring colorful artwork. The sonosheet boom was short-lived, though -- many companies went under as the market became flooded in the 1970s, and the phenomenon all but disappeared by the 1980s.
The kaiju pictured, in clockwise order are: a patchisaur breathing fire at Ultraman, Alien Baltan vs. King Joe; Eleking vs. another patchisaur; and two different views of Gabora who is one of the few "named" patchisaurs we know of (more on him later). Incidentally, if anyone can read Japanese please share the translations as that may give us further clues as to who these creatures are.

Of particular interest to gamers is the top left photo, which Monty N. Mypokit identifies as the progenitor of the umber hulk, and the bottom right which was the inspiration for the bulette. In tracking down the origins of these giant monsters, we can narrow down the search to a few specific elements.

Ultraman surged in popularity in the 1960s, which was why toys were later produced to feed fan demand. Any patchisaurs Gygax might have considered were therefore before the 1970s, when D&D debuted, limiting what type of kaiju could be the archetypes for later D&D monsters to that time period.

Secondly, not all kaiju are created equal. Patchisaurs didn't even necessarily appear in the show; part of being a patchi means the kaiju were knock-offs and could be fabricated out of whole cloth for a sonosheet.

Third, the transition from comic book or television show to toy format means that something is likely lost in the translation. Thus kaiju who might have wings are sculpted without them, and since there are no moving parts it's impossible to tell if a monster (like Gabora) could transform into something else.

These three elements have served to obscure the origins of D&D monsters, such that players have often thought that the monsters inspired the toys rather than the reverse. In the next several installments, we will set out to clarify the family ancestry of the D&D monsters we know and love.

Wow! This is most informative. Learnt a lot from this short article. So much cool stuff from a different culture.

I am not well versed in the Japanese scene, so heard of Ultraman and maybe watched one or two episodes randomly, but never knew the origins of the Owlbear and Umber Hulk were from there.

Supporter
This is the kind of history they should be teaching in schools. French Revolution? Faugh.

D&D has always been anime.

I was into cheap plastic dinosaurs when I was a little kid, and I had these. I still have my rust monster and bulette.

Yes I had some of these as a kid too and never realized the Ultraman connection -this is great stuff.

Considering Final Fantasy I was a rip-off of D&D, this sort of closes the cultural exchange loop


Technically, Ultraman was not anime. It was just pure awesome!

Now, find me a source that they were using Star Blazers for D&D (aka Space Battle Ship Yamato)or at least Battle of the Planets and then we can talk anime.

What a great article!
I still remember occasionally getting bags of those "dinosaurs" from the dime store, as stocking stuffers, or whatever as a little kid. I was completely smitten by (real) dinosaurs, of course, so some of those badly injection-molded plastic critters really, really baffled me.
A few years later, when I got in to D&D and discovered the rust monster and the (much smaller!) bulette, my perplexometer hit 11.

Lord Mhoram said:
I was into cheap plastic dinosaurs when I was a little kid, and I had these. I still have my rust monster and bulette.
Click to expand...

I had them for a long time, but alas they are no more.

Clearly, this means D&D needs its own Kaiju Girls spinoff

Looking at the first edition art of Owlbear, Umber Hulk, Tarrasque and Bulette you can really feel the Ultra Kaiju origin!

I used to have that bag of rip offs. Between brothers, visiting rug rats belonging to aunts & uncles, and various moves, I have lost them all.

We still have an original "Bulette" from this set, the only survivor of some of these toys that my wife had as a kid.

According to my daughter the upper left maybe translates as 'Sky King', the upper right "Cosmic Final Fight', the lower left '<blank> Showdown' and the lower right would translate as 'Volcano Combat' as in a one-on-one fight. She notes that she isn't an expert or native speaker so these could be wrong.

Now I want to give Dada DnD stats...


rtorno said:
According to my daughter the upper left maybe translates as 'Sky King', the upper right "Cosmic Final Fight', the lower left '<blank> Showdown' and the lower right would translate as 'Volcano Combat' as in a one-on-one fight. She notes that she isn't an expert or native speaker so these could be wrong.
Click to expand...


I recognize some of these but not the one in the upper left pic, but I'm going through the Ultra Kaiju list at the Ultraman Wiki...

One thing I found interesting is this guy's tail and back is VERY Rust Monster: Kemular

This guy: Zambolar and this guy: Skydon were probably turned into toys at some point.

This one too: Gamakujira and maybe this guy was used as a dragon by someone Aron

And tell me this thing doesn't look like a Flumph? Absorba

"Absorba" sounds like the name for a brand of paper towel.

So is the Bullette in fact an Anchilosaurus or something from an old Godzilla Movie ?

Snarf Zagyg said:
Technically, Ultraman was not anime. It was just pure awesome!

Now, find me a source that they were using Star Blazers for D&D (aka Space Battle Ship Yamato)or at least Battle of the Planets and then we can talk anime.
Click to expand...

The Plastic Ancestry of the Umber Hulk

The Plastic Ancestry of the Bulette
2

The Plastic Ancestry of the Rust Monster