It's time for Confessions of a Game Designer. I didn't know much about the Warhammer games or settings outside of the fact that many of my friends loved them and that they had hundreds of dollars of minis that they were never able to paint or use. I've played a few grim fantasy games in the past and heard folks speak fondly of the randomness of Warhammer Fantasy Roleplay's chaos. "I rolled a Beggar," they'd say, "and I died from an infected wound!" This didn't sound like a ton of fun to me, but when Cubicle 7 sent me a review copy of their introductory set for their latest edition, I admit I was curious. I've always believed in playing a wide variety of games and after recently finishing a playthrough of The Witcher video game I was in the mood for something muddy and gritty. 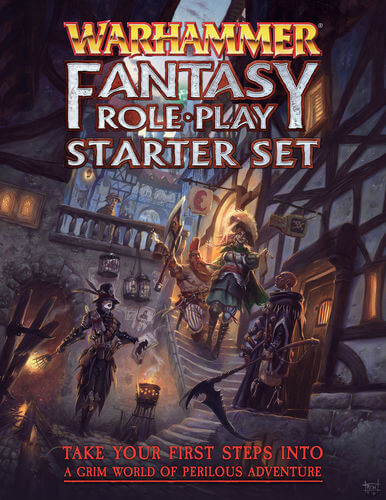 For those unfamiliar with the Warhammer setting, it's a darker take on European fantasy that's been around since the mid 1980s. It offers many different takes on the elements of Dungeons & Dragons fantasy and has more of a Grimm's Fairy Tale feel than the heroic fantasy of Lord of the Rings. Non-human characters are fairly rare, and the game focuses instead on the squabbles of humans. The most famous adventures focus on investigation and getting caught up in the intrigues of the nobles and power players of the world rather than being sent by a shadowy figure to scrape a dungeon clean. Magic is also potent natural force rather than something industrialized into spell slots and potions. The populace fears it because of its connection to the forces of Chaos that threaten to bleed through and destroy the world. But its also a great allegory for the allure of the setting: it's risky, dangerous, but maybe if you are lucky you can ride it to becoming a legend.

The Warhammer Fantasy Role Play Starter Set comes at a time when RPG companies are once again realizing the value of a good boxed set. The Fifth Edition Starter Set and Essentials Kit are excellent introductions to the grand old dame of roleplaying games. The Alien RPG recently released a starter box that contained many of the accessories sold separately like card and dice plus an adventure originally included in the pre-order that is a great emulation of that universe. The WHFRP set doesn't skimp on production value either. It comes with gatefold character sheets, rules primers, gorgeous full color artwork and even a pair of Q Workshop dice that look like someone scribbled an illustration of D10s in an earlier edition and they just sort of fell out of the book. The cleverest bit of engineering comes for a solution to a GM screen. Rather than skipping it or offering a flimsy attempt at one, the boxed set prints the most common rules for reference on the inside box top and suggests the GM use the box as a big rolling tray with the rules stood up in an "L" shaped box formation.

The first of two books that accompany the set is the Adventure Book. The box centers around Ubersreik, a river city that offers the grime one comes to expect from the setting. The book walks players through their first combat during a marketplace riot that sets up the short campaign. Players are pressed into joining the City Watch instead of serving time for their part in the riot whether it was justified or not. These adventures as watchmen give a tour of the highs and lows of the setting from arrogant nobles and corrupt cops to the good folks trying to be a candle in an otherwise dark world. The mini campaign offers a lot of flexibility. There's a starting adventure and an ending, but the rest of the pieces can be fit anywhere during the storyline, either by players choosing the storyline or by the GM picking the next piece. There are also optional adventures sprung out of the backstories of the pre-generated characters.

The second book is a sourcebook on Ubersreik. The GM can use this to give more flavor to the main campaign but it also serves as a great resource for groups who finish the main storyline and want to keep going. It's a location based write-up, but each location also has a prominent NPC there to give the space a bit of personality. Every location also has a pair of story hooks connected to it, one of which usually is about a secret the NPC located there is trying to keep covered up. Some of the secrets are silly, some are deadly but they all help reinforce that much of the darkness in the Warhammer world comes from petty human desires instead of alignments or clear cut moral lines.

Long time fans of the game (who have likely been chuckling at my wide eyed discovery of this setting while reading) will find good resources here too. The introductory adventure is strong and combined with the hooks in the Ubersreik sourcebook combine for a decently sized campaign. Owners of the core rulebook can swap in their own characters fairly easily and use the pre-generated characters at NPCs or to have on hand for friends who might want to try it out for an evening.

Warhammer Fantasy Roleplay Starter Set can be purchased directly from Cubicle 7 or at your Friendly Local Gaming Store.

Ringtail said:
This is absolutely true. Despite their differences in many other respects, this does shine through.
Click to expand...

I’d also add, as an extra aside, that the whole Chaos/Law ‘World is doomed’ aspect of WFRP is also very British - it comes from Michael Moorcock!

Supporter
I think that middle earth seems largely more black and white when it comes to good and evil. While Warhammer is all shades of grey.

TheSword said:
I think that middle earth seems largely more black and white when it comes to good and evil. While Warhammer is all shades of grey.
Click to expand...

I think the good/evil thing in LotR is played out in terms of the main conflict, for sure, but can also be seen in terms of personal conflict too - Gollum, for example.

In the case of WFRP, the Good/Evil axis is essentially replaced by Law/Chaos (as per Moorcock’s work), although Chaos is pretty evil by most people’s standards.

TheSword said:
I think that middle earth seems largely more black and white when it comes to good and evil. While Warhammer is all shades of grey.
Click to expand...

As opposed to its 40K sibling, which is all shades of black.

Is this an advertorial? Because it reads like one to a T.

Kitsune Inari said:
As opposed to its 40K sibling, which is all shades of black.
Click to expand...