D&D General What is important to you about Spelljammer

I'm curious what elements of Spelljammer are important to people. Flying ships? Phlogiston and a 'Material Plane Only' focus? The Arcane? Crystal Spheres? Wildspace? Giff? Spelljamming Helms? The Spelljammer? Neogi?

For example, Spelljammer became a part of my home setting when it was first released, but I tossed about half of it out the door. You can Spelljam to planets in the Material Plane, and there are a decent number of flying ships in the material plane, but the majority of Spelljamming takes place in my Astral Plane / Astral Sea. Creatures use Spelljamming to travel between portals in the Astral Sea. The Arcane, Giff, Neogi, Scro, etc... all sail the Astral Sea (and my Sigil equivalent is there, too).

However, there is no Phlogiston and there are no Crystal Spheres. I have concepts that evoke different Prime Material Planes, but that design is based more upon Comic Book Multiverse concepts (and, to an extent, Time Travel).

I feel like my version captures the heart of the Spelljammer setting, but does so in a way that is a little less alien to the origial Great Wheel design (although my setting varies from that greatly in other ways). Other experienced Spellhjammer fans that have joined my campaigns have been a little disappointed that I don't have all the features of the original setting, but they generally adapt and appreciate my setting.

I'm curious - what would need to be included in an actual Spelljammer product for you to decide "This is truly Spalljammer".

I want Spelljammer, not some bastardization of it. The one exception is that I wouldn't mind the addition of ships that travel the planes as well as all the rest. That would be an expansion of Spelljammer to me. Spelljammer+ is okay. Spelljammer- is not.

For me that it can be a mode of transportation and exploration. I didn’t care for the setting and the over the top insanity of it all. It was a great idea poorly executed.

I really liked Spelljammer, but since it seemed designed to allow for almost anything to be included, I am not married to any one vision (which is the opposite of how I feel about Dragonlance). If the phlogiston were replaced by the Astral Sea, I'd be fine with it (might even prefer it). Crystal spheres could bob in that sea, holding one or more worlds. Since I don't care about the layout of the planes (they are the planes and beyond mortal understanding, they can be organized completely differently every time the PCs interact with them and that'd still be okay to me), I am not concerned if a "Planejammer" version was not consistent with how the planes were described in any previous book.

As for things like giant space hamsters, I prefer avoiding that goofy stuff as "standard" - but again, it is easy enough to just ignore some choices. My guess is that spelljamming helms might be modified to not only rely on spell power to be run - allowing multiple classes to do it.

Supporter
As much as I loved the "gee whiz!' factor of Spelljammer, there are a few things I could live without. The Elves having a vast space navy across the setting for one.

Dwarven Fortress ships are kind of silly. Tinker Gnome ships even more so.

I want a ton of playable races, to really showcase all the different worlds and cultures you can encounter. Yes, even the ones from other games, like the Hadozee. Sure, some things will be lost, I'm sure Xichil body modifications will be something 5e will balk at.

But exploring strange worlds? Encountering ancient mysteries, or relics of past conflicts? Absolutely.

None of these being greater than The Spelljammer itself.

Firearms is something that I'd expect to see along with rules for ship-to-ship combat, gravity wells and air envelopes.

The number one thing that's absolutely necessary: open-decked ships that fly through space in a variety of fantastical designs.

I also like each solar system being separated into its own bubble where things can be Different. I like the idea of leaving "solar space" through some form of portal and entering another form of space where you can travel to another solar system in a relatively brief time, but the old implementation had issues, mainly how long it took. A journey through the Phlogiston would take 10-100 days, plus the time it would take to get to and from the crystal sphere which is twice as far out as the farthest planetary orbit. Realmspace in the original rules is supposed to be average-sized, and going from the sun to the outermost orbit takes 16 days, so 32 days to get to the edge. That'll get you a travel time of about four months: one month to the sphere, two months in the Flow, and one month to the next planet. That's a lot of travel time.

What if you instead had "jump points" at various places inside the sphere? You could both have naturally occuring ones that move about semi-randomly (so you could have some form of navigation check to see how long it will take you to get one, and so it's not feasible to set up defenses around them), and artificial ones that are usually connected to some sort of installation (like the Rock of Bral). These jump points, properly activated, would send you into a parallel space where you could reach other worlds fairly quickly – I'm thinking something like the slow zone from the Expanse, but perhaps taking a little longer to traverse, and having some more interesting features.

That is, do that if you want the Star Trek or Star Wars experience, of a vast sprawling setting filled with new and interesting places to visit and explore. The old version is fine if you want a more Expanse-like (at least the early books) experience, where the action is focused on one solar system and the variety of places within it (like the Astromundi Cluster). Both are fine, really – the difference between "We traveled two weeks from Earth to Mars where we had an exciting adventure" and "We traveled two weeks from Toril to Oerth where we had an interesting adventure" is minimal.

Anyhow, another thing I'd like to see rethought is the actual spelljamming helms. The idea of drawing on a caster's spells to power the ship is neat, but "Sorry, you're stuck sitting on this chair and can't contribute to anything" is not. I'd rather have spelljamming helms provide a base speed/maneuverability (perhaps with different models having different levels), and then the user could expend spell slots to boost it, or possibly do other neat things. 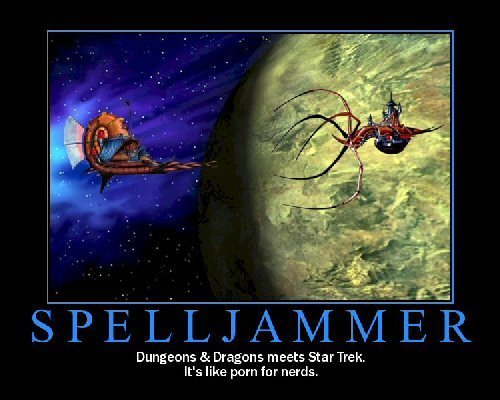 Where D&D can be mixed with sci-fi and space fantasy. 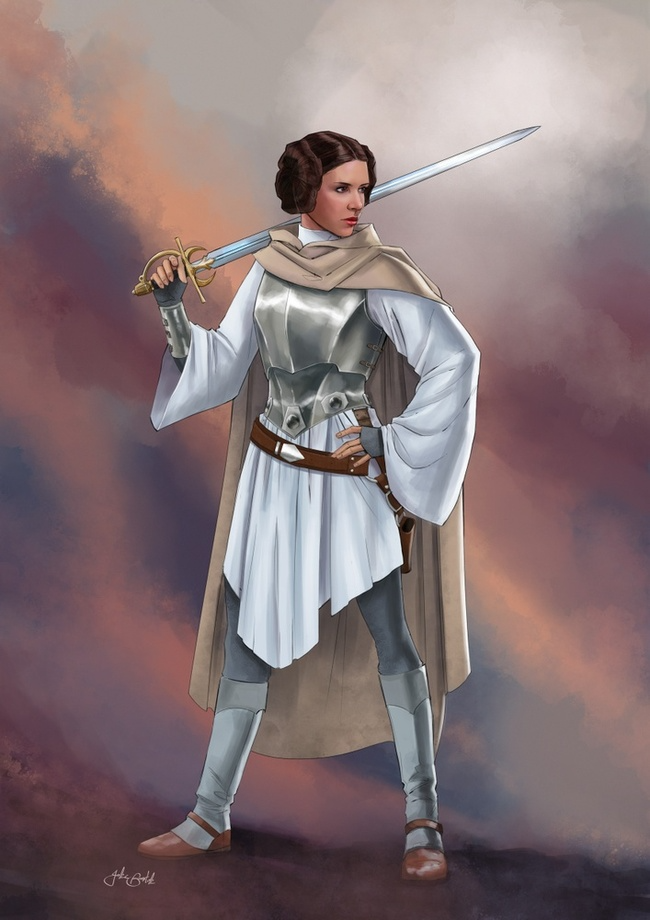 But weird space, with space dragons.

I'm in the camp that I don't much care about the setting. I would also toss half of it.

To me, astral and space are the same. Spelljammer is D&D in space.

The ships are my favorite part. The various helms I can do without.

It's all about the ships for me.

If you want bionoids in Spelljammer then you have to say Hasbro could sell toys based in these.

And the dragons from the monster manual should come back: sun, radiant, moon, stelar and company. But I guess then we should see also their dragonborn versions.

The weird stuff is the part I enjoy.

Exploring different worlds can be done a half dozen different ways. Sailing a ship is a part of nearly every setting (except Athas). The weird stuff is becoming harder and harder to come by.

Though it would be nice if they properly incorporated guns.

Yep, this. There are various changes I make for my own use, but just as I'm not interested in seeing someone else's vision of the setting, neither would I want to impose my take on anyone else. It should be presented as-is.

Also, given the mess WotC made of Ravenloft, I'm frankly not at all interested in any attempt they make to 'reimagine' the setting.

Yeah, one of the real advantages Spelljammer has here is that the original material left a lot of room, so it's possible to keep all the core parts while expanding and retooling as needed.

I did open a thread about SJ on rpg.net.

I stole a lot of stuff about the aether from Tales of Arcana which talks about aether streams and flow. But I also have for more advanced species, they can use the astral plane to travel which is a lot faster.

Blackstorm Realms is out soon, which looks like SJ with the numbers filed off...but I could be wrong on this. in my SJ setting, some spheres will follow different physical and metaphysical rules. Tales of Arcana also talks about the mortal realms, such that they can have their own afterlives. This led me to Eren Chromicles - Godslayer. Such that each sphere has its own Empyreans (gods),which live in pocket dimensions. This resulted in me tossing standard DnD cosmology straight out of the window - such that Midgard could be its own sphere, with its own World Tree.

The issue I had with the original Spelljammer is it didn't feel like it hung well with established D&D settings. I felt that the author was to tied into parodying medieval ideas about space that they didn't think enough about "how is this D&D?" or "how does this work for people who don't know much about medieval science?"

I think there is a lot of room to improve on the original.

Remove gunpowder and make all weapons totally alchemical, or artificer based. So instead of shooting a musket ball it shoots a ball containing flame, or an artificer lightning gun (similar to Shaintar). Lots of scope with this to be honest.