Star Wars What Shows Would You Make?

So, imagine you have control of the franchise, and you have Disney money.

What are your deep wish Star Wars shows?

Antarian Rangers - set in the Mandalorian timeframe or soon after, get a good ensemble, have them stop one of the many post-imperial factions from rising, investigate some dark side stuff, hide one or two force users in their ranks. Aim for Firefly meets Galaxy Rangers.

House of Wren - Just a show about Sabine Wren. Asohka can come too.

[a good name] - canonize my friend’s Outer Rim sector, with its human Traveler folk, holdout faction of Imperial loyalists as the Alliance transitions to the New Republic, it’s strange ruins of a fallen interstellar empire from long ago, it’s exiled houses of Tapani nobles, lots of other cool stuff. The protagonists would be two Tapani brothers and thier allies. The older brother is a Jedi (either student of Luke or perhaps a member of an offshoot order that survived the Jedi purge by hiding out in the backwater frontier) who is working with the local rebels, and the younger brother is a racer, saber-rake, gambler, and “entrepreneur” with a heavily customized YT-1930 modified by his Traveller genius mechanic girlfriend. They’re foils to eachother, and have a younger sister that is getting herself in trouble by hacking both Imperial and civilian networks.

They could be sisters instead, without changing anything else. The show would move through action of various kinds, philosophical questions and explorations, political intrigue, and eventually discovering that the younger brother is Force Sensitive, and probably flirt with him going dark because he is a hothead.

I want The Ninth Jedi from Star Wars Visions to be expanded into a full series. It had the perfect combination of great animation, characters, storytelling and a very Star Wars feel, plus some cool ideas that would be great to see expanded.

Don't really care so long as it's entertaining.

One more I just thought of, as a Mandalorian spin-off: Those two Republic X-Wing pilots who showed up in an episode or two in the second season. It'd be fun to see a series set around what are essentially the beat cops of the Star Wars universe.

The (mis)adventures of Grogu and his ewok padawan

I would make a trilogy (of course) of the 3 Zahn books that took place after the movies. I now the books are like 25 years old, but they would make good movies.

I also liked the book that followed all the minor cast from the Jabba scene where Luke walked in. The book had a chapter on why/how each of these 'small' people came to the place from the jawas to the musicians. There could be an hour show on each of these.

You can also just make up a show about some stormtroopers and life on the front lines. It could be a soldier show or something like a space cowboy show that is more fun. It could even be more A-Team and light. Just a bunch of grunts making the best of it.

So, the problem is that it's all on Disney+.

I would be genuinely interested in seeing the Star Wars universe explored, but with a more realistic and gritty look. Sure, the Mandalorian (and similar shows) can ... somewhat ... push the boundaries, but not really. It's akin to when Netflix made the Marvel shows (Daredevil, Jessica Jones, Punisher, Luke Cage, and ... that other one). They weren't perfect, by any means, but they were vital and different in a way that the MCU and associated shows were not. It opened different areas to explore.

I wouldn't want that to be the entirety of Star Wars- after all, it's mostly for kids. We don't need it to see Darth Edgleord Grimdarky. But I would like to see further exploration of more complex themes than I think Disney+ can present.

I want The Old Republic MMO turned into a long running show.

Jedi Academy series would be cool.

•a VH1 Behind the Music style documentary about the Cantina Band

•a horror movie in which Vader is hunting down and killing other force users. It would be like a cross between Jason/Michael Myers and Highlander. The scene is a family camping on an idyllic planet. A father explains the myth behind a constellation to a child, while sitting by the campfire. lightsaber noise as a red tint cones across the terrified faces of the family Mayhem ensues.

Or a set of miniseries of the Knights of the Old Republic games.

MarkB said:
Or a set of miniseries of the Knights of the Old Republic games.
Click to expand...

Argyle King said:
•a VH1 Behind the Music style documentary about the Cantina Band
Click to expand...


As Figrin D'an and the Modal Nodes evolved from a local Tatooine favorite to a headliner on Coruscant, the friendship and shared passion for music that they all had became a swirling abyss of drugs and debauchery until tragedy struck.

Tech Mo'r: Yeah, so we enjoyed playing on Tatooine. Sure, it could be a little rough, like when that human killed Greedo, but we all had a good time.

Lirin Car'n: I never got along with Figrin. I was always as good blowin' the Kloo as him, but he got all the lead parts,. I thought things would be different when we were signed to play in Coruscant ...

Doikk Na'ts: When we hit the big city, we made it big! We had everything we could ever want, women, men, jawas, glitterstims, spice, deathsticks.

Sun'il Ei'de: We had it all. But Figrin let it get to his head. He started doping up and racing... he should have known better than to load up on glitterstims and race dead man's curve ....

I would like more stuff that, like Visions, ignores canon and just goes and does its own thing.

I'd have something set in the "current time" of Star Wars, post-The Rise of Skywalker. Something with brand-new characters.

Other than that, I don't know. Maybe some sort of Shakespearean take on a conflict between a single Jedi and single Sith on an isolated planet, and how their escalating clash affects the people in their orbit.

Either that or decades after his death in the Clone Wars, a clone of Count Dooku awakens with instructions from his original self. Unsure of his place in the new world, he sets out to fulfill a destiny of political machinations and the dark side of the force. As to who would play a younger Dooku, maybe Lee Pace?

Not sure I would want to see this show. That word has certain slang in America.

Ralif Redhammer said:
Either that or decades after his death in the Clone Wars, a clone of Count Dooku awakens with instructions from his original self. Unsure of his place in the new world, he sets out to fulfill a destiny of political machinations and the dark side of the force. As to who would play a younger Dooku, maybe Lee Pace?
Click to expand...

All the clones of him awaken and turn crazy mad seeking to become the true one and raid the hiding places of all his magic. One becomes a vampire in Westgate and another tries to take over Darkhold.

aco175 said:
Not sure I would want to see this show. That word has certain slang in America.
Click to expand...


That would be terrible! And for a Disney+ show, too!

I can just see the reviews ...
There hasn't been this much open drug use on an official Star Wars shows since the Star Wars Holiday Special. -The Hollywood Reporter

What did I just watch? Did someone put LSD in my coffee? Again? -Anthony Lane, New Yorker.

I wish they go with what the clone wars were 'originally' envisioned as; an experiment in cloning that went horribly wrong because clones are not connected to the force which makes them go nuts...eventually. What we got made me sad.

Supporter
If there was a way to do Leia, Luke, and Han without it being too jarring, I'd enjoy versions of some selected issues of the Marvel Comics adaptation that started in 1977 - maybe a Crimson Jack arc with things from issues 7 to 15.

After bidding farewell to their Rebel friends, Han Solo and Chewbacca set out to return to Tatooine to pay off their debt to Jabba the Hutt. En route, they are hijacked by space pirate Crimson Jack and his gang of thugs. The pirates take the reward money given to Han and Chewbacca by the Rebel Alliance for rescuing Princess Leia Organa but spare their lives.
Click to expand...


And the arc includes "Eight for Aduba-3" with Jaxxon, the Waterworld Story, and the showdown with Crimson Jack.

Issue 49 the "Last Jedi" is another I remember fondly. 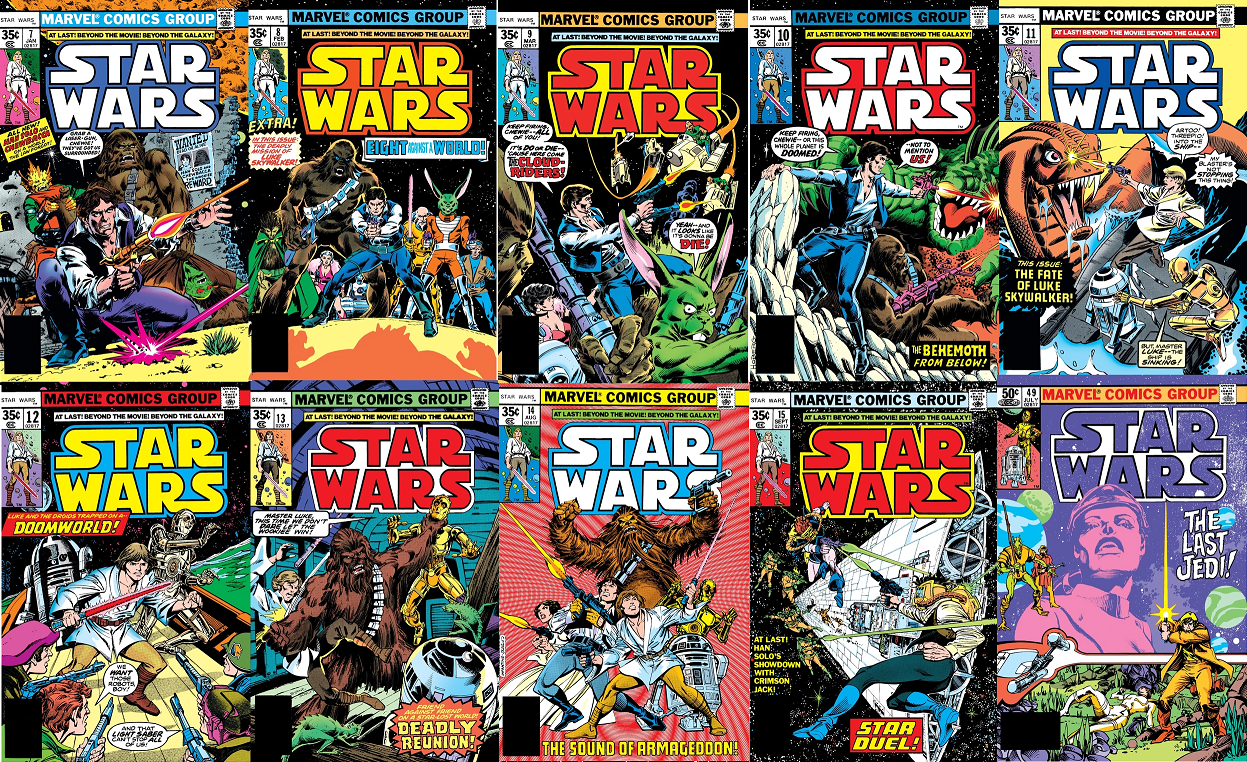 Basically Everything Coming to Disney+ in the U.S.