Which edition of D&D did you grow up with?

5ekyu said:
If I may ask, what were your other RPG starters and your early formative? Not D&D is just as interesting to me. I started with AD&D but black book Traveller was as big for us early.
Click to expand...

The first four systems I can remember playing are Villains and Vigilantes (high school), Champions (1st year college club), and Over the Edge and Mage (game shop where I really started to become a 'gamer').

Early years included things like Call of Cthulhu, Paranoia, Kult, Whispering Vault, Nephilim, Elric, Immortal, Ars Magica, Pendragon, Lace and Steel, Castle Falkenstein, Bushido, and Amber. Probably others I'm forgetting. Playing several games a week gave a lot of opportunity for experimenting with various systems, and there were a lot of fun things in each of their settings.

So the primary game styles were: superhero, supernatural, horror, and period fantasy. Got into some cyberpunk and sci-fi systems a bit later. The period fantasy systems largely supplanted any need or desire for D&D, though the very first (and only non-5E) D&D game I played in could also be considered a period fantasy setting: Al-Qadim.

On the mechanics side, the fluidity of the magic systems in games like Mage, Ars Magica, and Castle Falkenstein always made the D&D magic system feel horribly stilted and clunky. I'll also admit that the wall of extended rule books for D&D turned me off as well.

I did still enjoy all the various D&D novels, though.
A

Becmi and ad&d. Liked aspects of both becmi and 2E. I really didn’t even look at 2E as an edition change as more of a cleaning up of 1E. We could still use what we wanted like the illusionist class for 1E with no real modifications needed. Same with the 1E oriental adventures.

I kinda notice that these days when people here edition change they think they whole game will be drastically changed. I don’t think that is necessary. I would actually like to see a 6E that is very similar to 5E like 1E and 2E were. Just clean up some of the problem areas. Redo the beast master. Fix a few spells here and there, etc.
T

Kinematics said:
The first four systems I can remember playing are Villains and Vigilantes (high school), Champions (1st year college club), and Over the Edge and Mage (game shop where I really started to become a 'gamer').
Click to expand...

Wow. That's like "The first 4 books I remember reading were Moby Dick, A Brief History of Time, Ulysses, and The Naked Lunch..."

BECMI D&D was where I started. The Moldvay Basic and Moldvay/Cook Expert sets were my intro to the game. There were folks around me who ran AD&D 1e so I'd play as a player at their tables, but I always ran BECMI when I DM'd (well, the BE part anyway - the CM only happened a few times, and the I only once as a standalone short "let's see if these rules are actually playable" mini-campaign). I didn't get into running AD&D until 2e, and it didn't last long because a) I hated running it and b) by that time it was the late 80s, I had a job and money, and new RPGs were cropping up all over. Eventually we abandoned D&D entirely for other games and even when we tried to play D&D nobody was into it - until 3e hit and suddenly it felt fresh again.

(But even early on I was playing other games - I think Star Frontiers was my second RPG experience, Chill wasn't too long after, and the original MSH basic set was after those but early enough that I consider it pretty formative to my RPG experience.)

I started with the BECMI Red Box. When people talk about Bargle and Aleena, I still feel the beautiful pain of that wonderful intro adventure.

Since then I have played every official edition of D&D, both older and more recent and all of them sit on my shelf among a number of other RPGs.

But I always come back to my first love.

started with AD&D 1e. I wish I had gotten the chance to play Basic though. I was confused by the two streams, thinking that Basic was more for kids and AD&D was for older kids and adults. But I had more time actually invested in 2e, and have fond memories of those years. For some reason I always homebrewed, something I rarely do now.

EDIT - if I want to get really technical, the original Endless Quest books were my true intro to D&D. I still until this day have great admiration for Return to Brookmere, the lone elf in the elf kingdom overrun by evil humanoids.

The edition that I started with is not the same as the edition I grew up with. Red Box is what drew me into this wonderful hobby, but I grew up with 1e until I grew out of it and expanded into other systems.

My first RPG wasn't D&D, though I had heard of it. In 6th-7th grade I DM'd for a friend who controlled a full part of adventurers playing the british RPG Dragon Warriors (not to be confused with the American titles of the first few Dragon Quest games).

I got my first set of polyhedral dice for this game. It included a rather unusual D20 that doesn't have opposing sides adding up to 21, nor the sequential nature of M:TG life counting D20... I still have the whole set today!

We mostly did dungeon crawls, very puzzle, little social and I completely misread the XP rule and the characters became WAY too strong too quickly to the point where I had to make up stronger and stronger creatures... usually Dragons with additional heads.

I carried that red Basic set everywhere. I can still pick out each of the dice that came in it from my now-large dice bag. I remember reading it over and over and over. I was so excited to get each successive set, all the way up to Immortal. I cannot believe that I sold them all when the Rules Compendium came out. I wish I had them all.

Started playing with 1st ed AD&D. The one I have played the most though is 2nd ed. Then played a little bit with 3rd, and even less with 4th (It is a computergame without a computer imo). Then played 5th.

We played Pathfinder 1e instead of of 4rth ed.

Yes I have played a little bit of BECMI as well, but did that concurrently as 1e AD&D.

I would say red box, but I was already 18 so not sure if that counts as growing up with.
3

I started with BECMI back in 1983. Was at Epcot and saw a cool looking handheld video game involving dragons and knights being sold for $20 but left my cash at the hotel. Parents refused to loan me the money. When I got back home I searched and searched to find this game and stumbled upon the Basic Set being sold in Walgreens. Didn't know the difference between the Moldvay and Mentzer versions being sold side by side and since they were $9.99 each I got both and was quickly hooked. Several visits to Lionel Playworld to buy modules (at $4.95 each - a price that was almost armed robbery to a 12 year old) then led me to Warwick Hobbies where I discovered AD&D, Rolemaster, Star Frontiers and Top Secret.

That led to my teen years buying pretty much everything published for BECMI and AD&D. When Lionel was going out of business, I think I bought a copy of every single module that I didn't already have (I think it was like 12 modules) for the princely sum of $3 total.

Anyhow, when did you jump on the train?

1E around 1986. There was a group of us in elementary school that would play.

What did you grow up with?

For me it was 2E. I was in middle school when 2E dropped in 1989. That edition took me from middle school, through high school and my undergraduate college years and into my first job post-college. I played off-and-on throughout those years, from one-shots to year-long campaigns.

While I have fond memories of the campaigns I played in during those years, I have no nostalgia for the D&D game rules of that era, which I now see as both counter-intuitive and a hot mess. And while I was unaware of it at the time, TSR's corporate culture certainly left something to be desired. Lorraine Williams might as well be She Who Shall Not Be Named to some gamers from that era.

During which edition were you indoctrinated?

I'd say 3.X. By the time 3E came out in 2000, I was an adult. It was clear that D&D was not just a fad of youth for me. I began playing with other adults who took the game seriously. I played 3.X intensely from 2001-2006 and spent hours working on my characters.

Which edition is "home"?

well, I was 20 when I found D&D and already grown up (although my parents might have disputed that).... I first bought the BD&D 'blue box' set when I was trying to find out just what it was all about, and found a small group and ran a few PCs, but it wasn't long before we all 'graduated' to 1E. I spent a lot of years in that edition, and was a gamer off and on during 2E. So, I guess 1E is the one I 'grew up with'...

Started as a teen in the early Aughts with a Mish-mash 3.0-3.5 (we were not that careful about which was in play). Due to dissatisfaction with the new edition and stage of life not being conducive to gaming dropped out of RPGs ~2010 in my mid-20's, saw a commercial for KREO D&D sets in the theatre before the LEGO movie in 2014, found out there was a 5E being published in a few months, and it just took off from there. 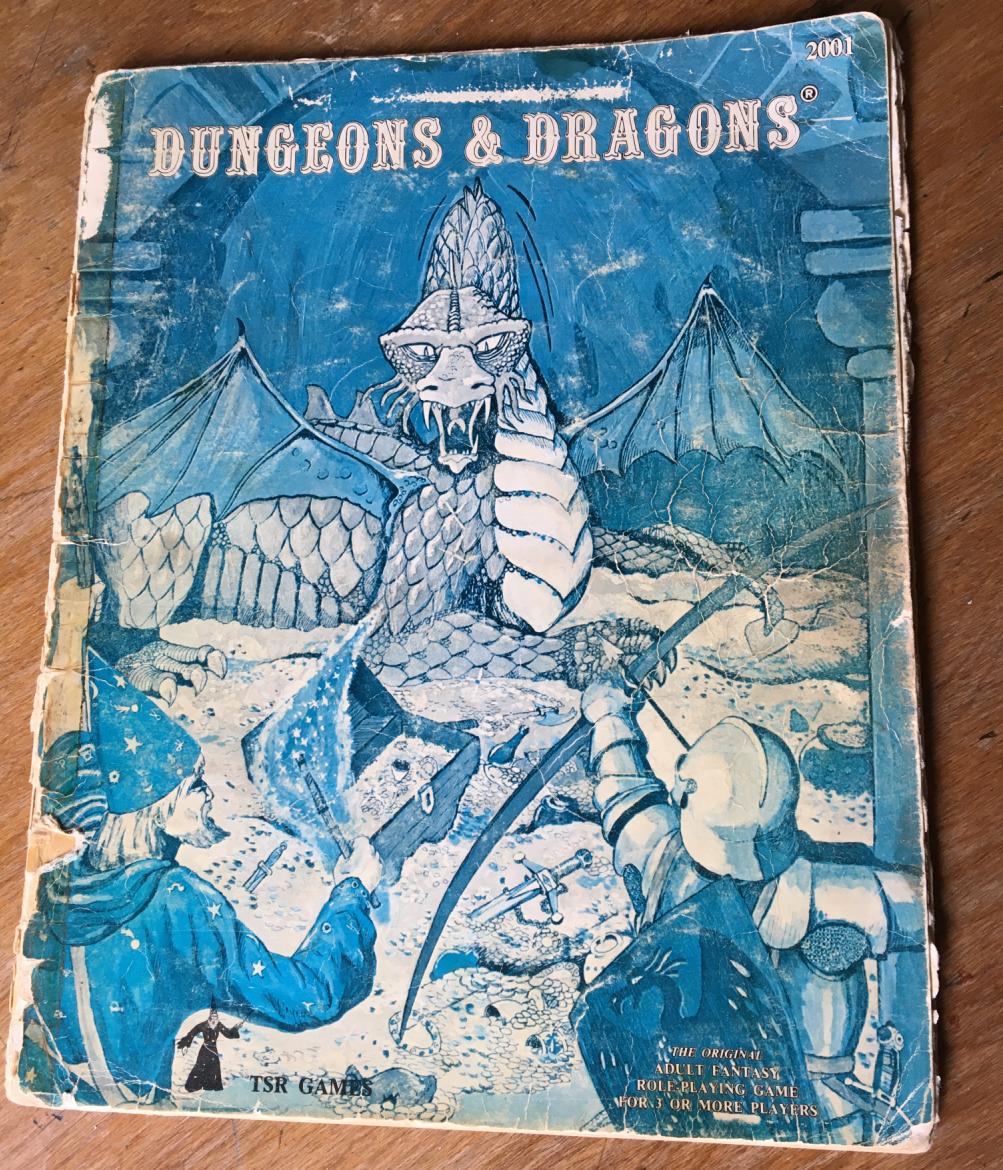 The first thing I actually played was AD&D. But that was just one time. I then went home from that sleepover camp and asked my parents for D&D and they bought me this, which I played for years: 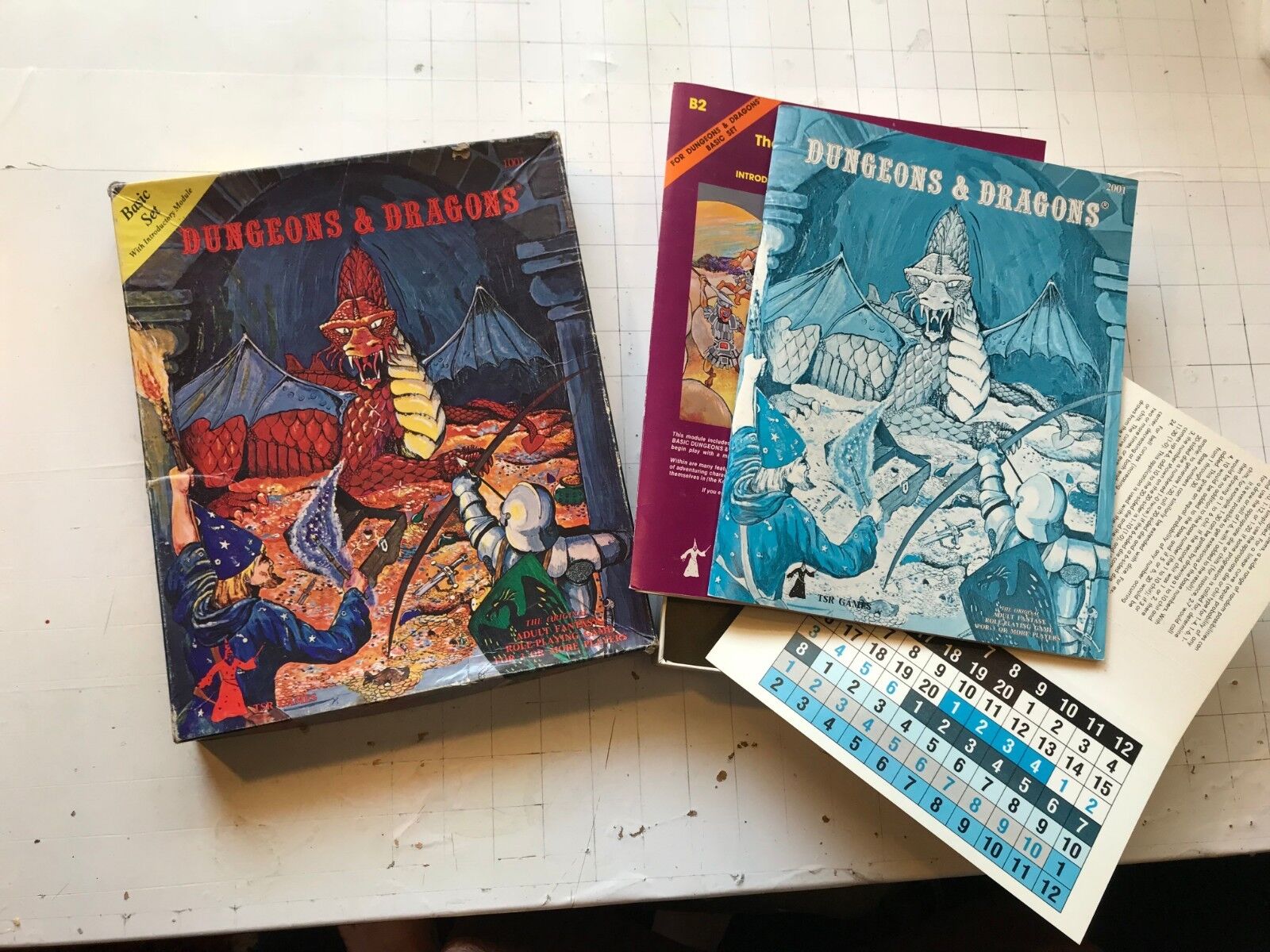 Still my favorite rule D&D book cover! Wish my copy had not been stolen years ago with my truck (Hopefully, someone in Mexico came across my Holmes basic and developed a love of gaming)
G

Mistwell said:
The first thing I actually played was AD&D. But that was just one time. I then went home from that sleepover camp and asked my parents for D&D and they bought me this, which I played for years: