D&D 5E Which of dice is the most special? Why?

How do you approach dice collecting? Do you like to keep a proper dice hoard, or do you have a Master Set that you use for every game? Perhaps a most special icosahedron inherited from your forebears? If you've got a most special die, what makes it special?

All of my dice are in the virtual space now. That means nobody getting their greasy pizza fingers on my math rocks or rolling dice off the table.

I have one dice bag I use for D&D/PF/DCC games. Its a Blantons bag because I'm classy AF. I have a few cubes of colored D6 for some games I play like Battletech. Though, as far as gamers with dice obsessions go, im pretty far behind in the race.

We bought a pound o'dice a while back and I looked through those to have matching sets. So if I'm running a PC with multiple attacks, I can roll all my dice at once including attack and damage. I can even roll not knowing if I'll have advantage because my translucent blue is always my primary D20 and my swirly blue is ignored unless I have advantage or disadvantage.

I also always do black then blue in sequence, adding white then red if I have that many attacks.

Because I like to watch the confusion on peoples faces when they think they just rolled a 20 sided.

D4. Because its the pointiest.

Most special? That'd be my black d24.

My most special definitely has to be my translucent d20 that's damn near impossible to read, and actually only goes from 1-10. It's useless, deceptive, and I love it.

I still have a d20 from back in the 80s from about the time we started playing. The plastic was terrible back then and all the edges are chipped and broken so it mostly just rolls around like a ball.

I was at the local convention a few year's ago and the DM was asking me why I was rolling a d20 instead of a d10. I told him I can use the second number on the d20 to get a d10 and he seemed amazed.

I will point out that only one die has an entire order of grognardspaladins devoted to it. And that would be the Order of the d30, a relic of a forgotten empire (namely, Google+).


I bought softcover of Dungeon Crawl Classics a month ago, so I picked up some funky dice. I hope to played it later this year! 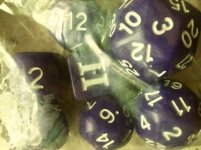 I collect based on aesthetics. I'll check the Chessex sets from time to time and just pick one up if I see something cool.

More importantly, I like to come up with a color scheme of dice for my characters.

I'll get out up to three complete sets (and a few extra one offs d20s in case one keeps rolling low) and they'll be the ones I'll use for that character. Like, when I played a Dwarven Druid I got myself a set of stone grey dice and one that was grey and green set. When I play Arcane characters I bring out my purple dice. Sometimes I buy dice, sometimes I work with what I got.

I stil have my first polyhedral dice set! The numbers on my d20 don'T seem to be arranged in any sort of logical order, it's wild. Not even Magic Life Dice order!


BrokenTwin said:
My most special definitely has to be my translucent d20 that's damn near impossible to read, and actually only goes from 1-10. It's useless, deceptive, and I love it.
Click to expand...

One of my friend had a D20 from a 'pound o dice' thing and we only realized after who knows how long that it had TWO 20 and no 1! Hilarious!

not-so-newguy said:
I bought softcover of Dungeon Crawl Classics a month ago, so I picked up some funky dice. I hope to played it later this year!

I picked up the fireball-red 7-dice set from Impact. They're weird and amazing. Playing with those gives me the same kind of "what the..." feeling when I first picked up the non-d6 dice back in the day. The d5 and the d7 are especially funky. I'm really surprised they didn't use the d10 and the d14 with double numbers for those. Must be to avoid visual confusion between them.

I have a box with my dice in it. They're set up so that I can roll any situation that is reasonable to come up at one time, including being able to roll 5 attacks with advantage and damage rolls for each attack at the same time. AMongst them, I have primary pair of d20s that I use for most of my d20 rolls (and for advantage/disad) - Blue and Gold metallic dice.

My most special die, however, is a fist sized d20 that I use for those 'this decides everything' rolls because it rolls forever due to the size, giving us a dramatic finish to the roll.
Last edited: Mar 16, 2022

My partner has gotten into resin crafting, so the most special dice to me are any that they’ve made for me.

D6s with Kanji numbers for playing Shadowrun. Because it forced me to learn at least six Kanji characters.

Charlaquin said:
My partner has gotten into resin crafting, so the most special dice to me are any that they’ve made for me.
Click to expand...

That's always looked cool and I keep mulling over getting into that...but haven't quite pulled the trigger.

overgeeked said:
That's always looked cool and I keep mulling over getting into that...but haven't quite pulled the trigger.
Click to expand...

Yeah, it’s pretty expensive to get started in. But custom dice!

My first set (received as a birthday gift when I was about 7 or 8): 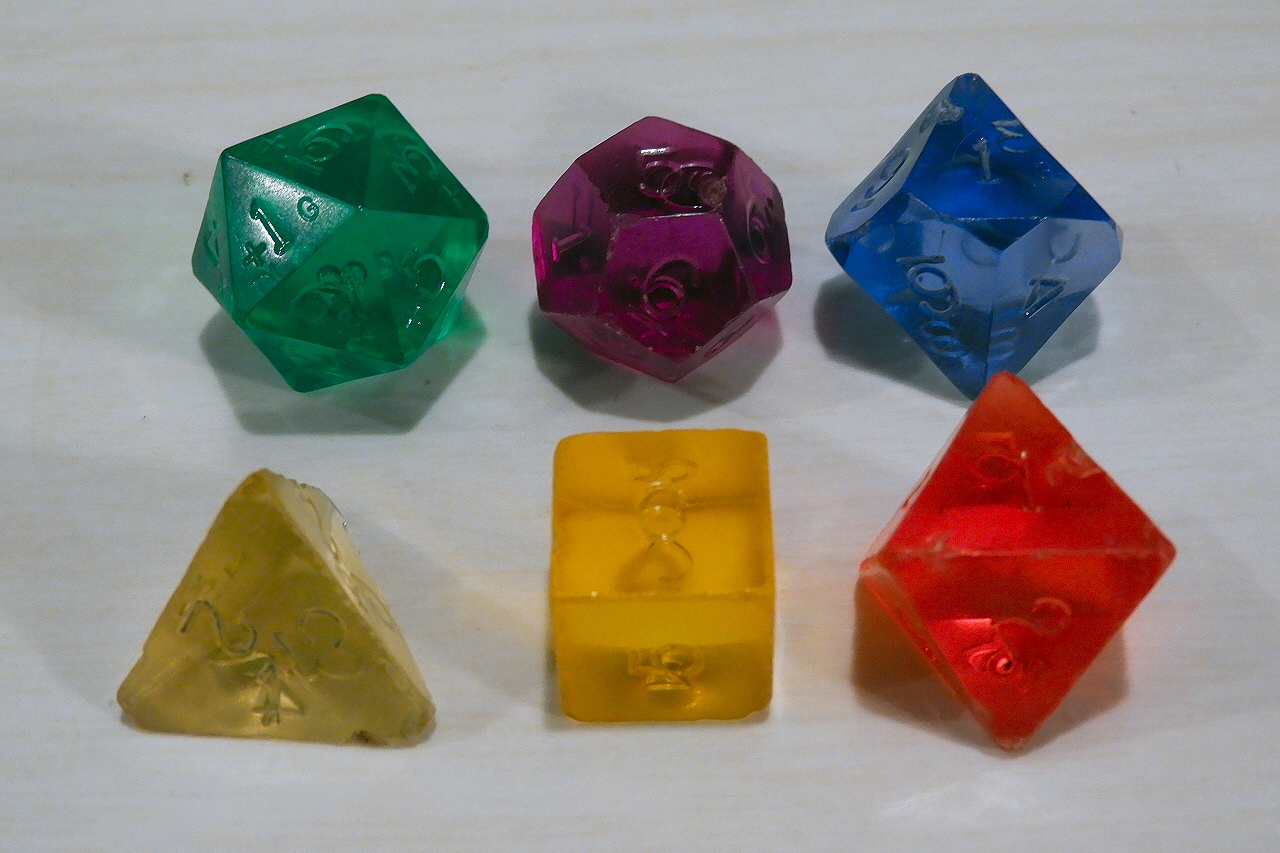 Prior to that when I was younger I always had to use the DM's dice (from his boxed sets-- he "gave" them to me but always said they were "his" and not mine...).

I have it in my Will the d20 will be buried with me, the other dice are going to my childhood and college friends who were part of my D&D groups.

DND_Reborn said:
I have it in my Will the d20 will be buried with me, the other dice are going to my childhood and college friends who were part of my D&D groups.
Click to expand...

But what happens if you're DND_Re-Reborn?

5.5E Fighters if superiority dice was something all fighters get
2 3 4

F
D&D General What is the most ludicrous multiclassed monstrosity that you've actually played?
2

Apr 24, 2022
Henadic Theologian
H
F
D&D 5E Name a technique or design choice that your group enjoys, but that is generally unpopular.
2 3 4