D&D 5E Wild Beyond the Witchlight Collector's Edition Miniatures Will Set You Back $750!

WizKids has a boxed set full of Wild Beyond the Witchlight miniatures for pre-order. The set contains 81 miniatures, including two unique miniatures only in this box, one of which is Tasha. All yours for just $750! D&D Icons of the Realms Miniatures: The Wild Beyond the Witchlight - Collector's Edition Box

For the first time ever, WizKids is releasing an epic Collector’s Box, featuring everything included in the set, and we mean EVERYTHING. That's 81minis total (but all in different sizes)! The Collector's Box contains: ALL miniatures in the D&D Set 20 booster/brick release (51 in total) ALL minis... 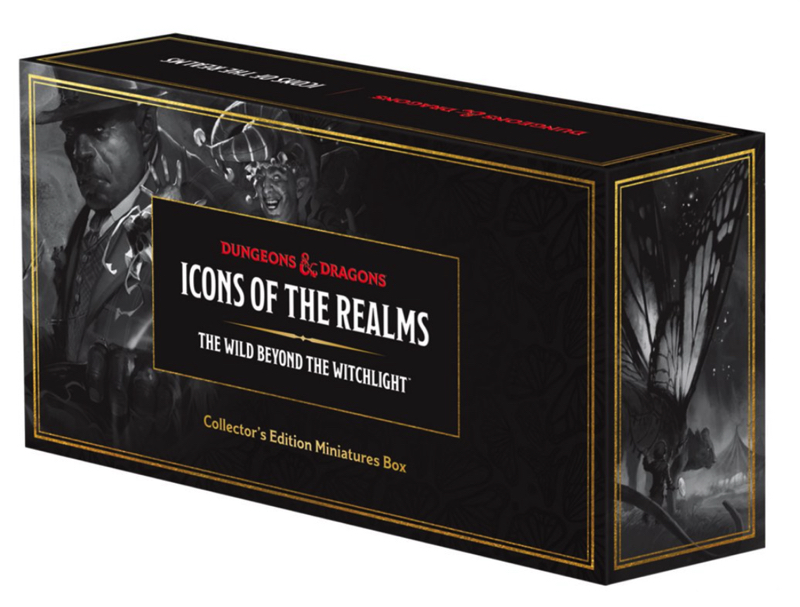 CM said:
One brick (8 boosters) should get you all the common figures, almost all uncommon figures, as well as 8 different rares or very rares. If you get a sealed case of 4 bricks, it should have all the figuress, except possibly for a few variants. Myself, I usually get a single brick or perhaps two if the set is very good, and then hunt and peck for the other singles I want on ebay. A lot of very rare figures are just meh unique named NPCs of some kind or transparent versions of characters, which aren't worth pursuing to me.

Side note: The Baldur's Gate Avernus set was Fantastic for demons and devils.

This site has a good breakdown.


A brick will get you 3 of the 12 rares on average. Takes all 4 bricks to get all of them.

In 1 case you will likely get:

eyeheartawk said:
40 hours you couldn't get out of the normal book?
Click to expand...

“Couldn’t”? Irrelevant. I got them out of the product I bought. This is like asking if I could have gotten the same 2 hours of entertainment from a different movie, or watching the movie in a different format. Who cares? I enjoyed going to the theater and watching the movie, and it cost me about $5/hr. Therefor the money was well spent.

I don’t need the books at all to spend 40 hours telling stories in my own version of the world of Eberron.

eyeheartawk said:
EDIT: I should also add that I think low ROI is absolutely reasonable. Half the stuff in the B&G Eberron box is just stuff broken out from the main book anyway. With some shards that serve no game function etc. Something like this can certainly be good, but it would have to be useful, and yeah, offer good value.

The Mask of Nyarlathotep prop set is $139 and contains 109 actual clues the players can actually use in a gameable sense, plus some other niceties. I'd take 2 of these over 1 Gold Eberron box (which, given the price difference, is almost doable.)
Click to expand...

And the Eberron box is full of props that are used to help run an Eberron game, from maps, encounter cards, etc, to handouts that are in-world items that contain useful in-world information. Not only that, but I have already used several individual things in the box for multiple different purposes. The rail station map has also been an unlicensed high rise tech garage and R&D facility, and the sky couch map has seen use to run an aerial chase battle, to set the scene for a meeting, and for an ambush the PCs turned into a counter-ambush (ie they ambushed Emerald Claw assassins as they tried to ambush the party’s noble friend), and my buddy used it as a full sized airship in his game.
The encounter cards are fantastic, to the point where I’m going to make new ones for my homebrew stuff from now on. The magic item cards are great for randomizing common items taken from enemies or find in searches. The dragonshards are the least “useful” props in the box, and just the delight from my group when I handed one to a player in character as the NPC handing them one, and telling them they could use it to replace the rare ingredient in crafting a magic item of up to very rare rarity, or grind it up and use it in place of consumed material components at a very generous rate, was worth at least 20$, by itself.

Beyond that, the whole argument you’re making is spurious in any context outside your own very personal preferences. You don’t seem to grok the value of props that aren’t literal game pieces, which I find unfathomably odd. That’s just a case of incompatible personal preferences. I find a game full of necessary props that a player needs to keep track of in order to succeed to be tedious, at best, while I find atmospheric props with occasional “useful” ones very valuable for what they bring to my games.

Add to that the fact I can just bring the monster booklet, a few encounter cards, a couple maps, and some sundries, because it’s all broken up and individual, and yes, the box ROIs just fine.

Warlock terrain sells very well locally at least. I have several sets and with the new clips they are very easy to use. They aren’t Dwarven Forge but they aren’t supposed to be. They’re more practical.

Nathaniel Lee said:
I don't think you've been guaranteed a complete set from a case for a few years now. That used to be the case, but even as far back as the Descent Into Avernus series you couldn't get everything from a case (this is from personal experience). The introduction of the A/B versions of minis really screwed things up.
Click to expand...

Really? I had no idea. Thanks for the clarification. I used to buy a case of certain sets I liked, but haven't in several years. This is good to know. Thanks.

Scott Christian said:
Really? I had no idea. Thanks for the clarification. I used to buy a case of certain sets I liked, but haven't in several years. This is good to know. Thanks.
Click to expand...


I think it is true again.

There were a couple sets with a lot of variants and people didn't like it so they stopped.

It has never been a guarantee though, just 99% as sometimes errors happen.

D&D General Icons of the Realms (Set 26): Sand and Stone