Talashia tilts her head a little at the strange bird, then her eyes widen as she remembers where she'd seen it last. Well now, that was interesting. She clearly wasn't spying on the, at least not anymore, but it was a bit odd to use a familiar to make contact in a situation where its safety wasn't assured. Losing one, Talashia had heard, wasn't pleasant.

She stands up and turns to face the bird, lifting her chin slightly as she assumes a mantle of dignity.

"Hello, Margarita. Is there something you need? We're a bit busy at the moment, but I'll always make time for a fellow sister of the Lodge."

Tamaran looks at the bird, albino raven interesting. Perhaps even more interesting is Talisha talking to it even so far to claim it was Magarita, maybe adventuring has finally taken its told on her. The white raven grackles and clutches the stone horn of the horned figure atop the totem first with one foot and then the other, going back and forth. It clearly recognizes the name 'Margarita.' At the rest of Talashia's speech, it tucks its beak down into its breast as if contemplating, making a soft tuk-tuk-tuk sound. Abruptly, the white raven cranes its head to look over its shoulder into the woods, then looks back at Talashia, blinking.[/SECTION]

"That's a strange bird," Elora commented, not recognizing it as the sorceress's familiar. She approached the totem herself and looked it over, her curiosity about religion, nature and magic all being peaked.

"This seems like a sacred place, we should be cautious."

Talashia glances sidelong at Elora and says, "It seems there's someone in need. If we can stomach a brief detour?"

She waves a hand at the bird.

Tamaran sighs great wound up in the affairs of the lodge this wouldn't end well.

Cocking its head and regarding the party curiously, the white raven bobs its head when Talashia waves her hand at it. For a moment it pauses, uncertain if the sorceress is telling it to fly off, but at last it makes a low grackling sound, flapping its wings and taking to the air. It slowly circles above your location by the totem, then heads to the southwest, above the dark pines of the Czernhurst...[/SECTION]

"Do you really intend to head after the raven in there? From what I understand Margarita is a big girl and can look after her self, besides we have other things to deal with right now." Tamaran offers up he is not keen on getting into what ever is going on not when his place in the world is at stake.

"What is the rush Tam? We have time for a brief sojourn. And the flowers and seeds aren't going any where. Nor is Old Nan." adds Fergus walking after the ladies.

"You miss the point. Margarita may be big, but she's also proud. She wouldn't ask for help if it wasn't important."

Talashia glances back at Tamaran. "She wouldn't put herself in our debt for nothing, after all."

If Talashia's comment was supposed to put Tamaran at ease it had the exact opposite effect, giving his wolf a quick scratch behind the ears he follows the others. 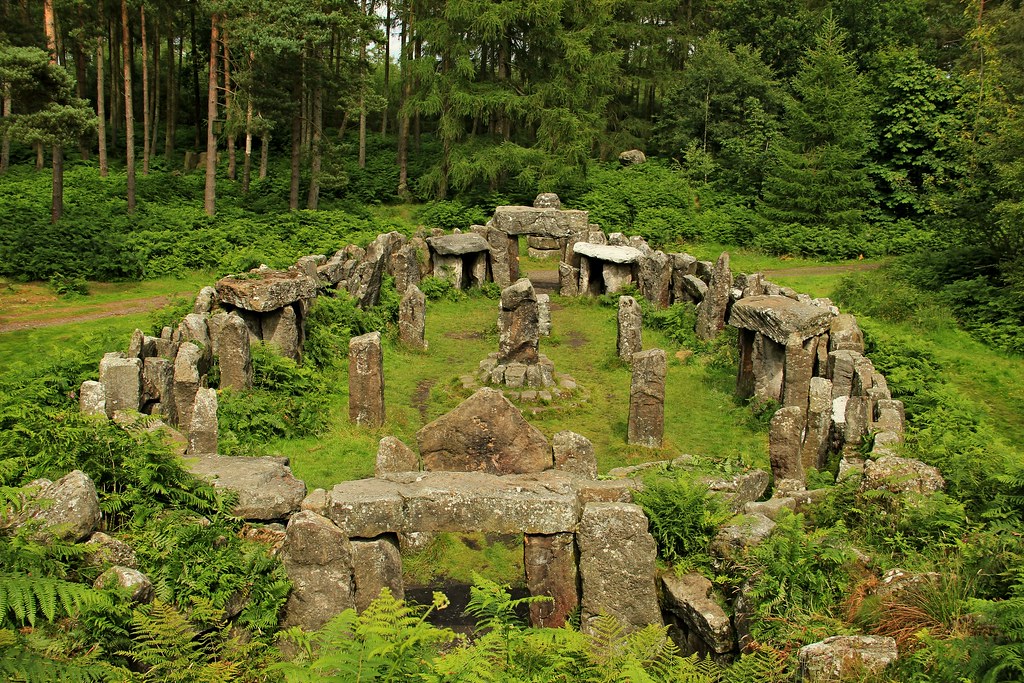 The side trek into the Czernhurst becomes increasingly difficult the deeper in you go, following the white raven's path south of the river. Gnarled roots amidst the litter of leaves and pine needles require careful footing. Small canyons drop off suddenly, carved by creek tributaries from the Arel River. The thicker the forest becomes the more intermittent your view of your white-winged guide. After nearly an hour, you find yourselves standing at a small embankment which drops down into a gulley to the south where you can make out what may be a cave entrance, and an embankment leading up to a hilltop ringed by a copse of alders with circle of standing stones in the middle. Above you, the white raven lands in an alder, grackling and looking up toward the embankment.

[SBLOCK=Elora, Fergus, Tamaran (Passive Perception DC 15)]There is an unnerving sound just barely audible from the hilltop, like something inhuman wailing in pain by something barely capable of speech. It sounds like it is moving in your general direction.[/SBLOCK]

[SBLOCK=Barakor]A subtle scratched marking in one of the trees is a sign used by criminals. While you don't know the precise meaning, you've seen such symbols used in Mahakam during the time of the rising Darkness there.[/SBLOCK]

[SBLOCk=Elora & Talashia (Sorceress lore)]There is a buzz of dark power in the air, traces of abjuration, necromantic and transmutation magic washing over the landscape around the hill.[/SBLOCK]

[SBLOCK=Fergus (Witcher lore)]This is just the sort of terrain that trolls favor. The worn bark you've seen on a few of the trees could be due to bucks scratching their back, but it could also be trolls doing the same. No sign of any "troll pies" or tracks, however, and your medallion isn't vibrating yet.[/SBLOCK]

[SBLOCK=Tamaran (Elven lore)]The Free Elves consider the Czernhurst to be the demesnes of Nan the Hag. From your study of the area's geography, you must be close to the druidic Circle of Tagha Bough.[/SBLOCK]

"This is Nan's land, tread lightly, there is a old set of standing stones ahead, some sort of Druid circle. I bet that's where the screaming is coming from" Tamaran moves off to the side and tries his best to blend into the trees.

"Yes, I hear an odd noise as well, and it seems to be coming this way. What bothers me more, however, is the air here. It feels... unclean. Possibly Nan, possibly something else? We should all be on our guard."

"Necromancy," Talashia said, her eyes narrowing. She didn't hear anything, but the magic was palpable in the air. "Some other magicks as well. To feel it from this far away, the spell or ritual has some power behind it. Lets see what this is."

"Lets see what this is" Tamaran repeats the words as he wonders if these people are crazy Tamaran was no coward, he never ran from a fight but he also knew not to go picking them for no reason... most of the time.

As you make your way up the gentle slope of the hillside past the alders and pines, Tamaran maybe 30 feet ahead and moving in a low crouch from tree to tree, weapons and implements at the ready, you hear the breaking of twigs. A figure lurches toward you, stumbling down the slope, sending up a flurry of leaves. It is a misshapen creature, feminine certainly, with matted dirty blonde hair, its face distorted so that one side droops, a hunchback causing it to lope with one distended arm, and its rail thin legs barely enough to support it for more than a few steps at a time. A horrible yowling moan leaves its voice like a muffled strangled sound when it spots Tamaran and the rest of you, crashing into a tree and sinking down. After a moment, you realize that the mud-stained garment it wears is the same white-lace trimmed yellow dress that Margarita Laux-Antille had worn earlier that morning. It looks up at you with piteous milky hazel eyes from its crumpled place on the forest floor, shaking its head as it makes an unintelligible sound, pointing toward the hilltop.

[SBLOCK=Fergus]Your Witcher medallion is ever so faintly vibrating, not as strong as it normally would in the presence of a monster.[/SBLOCK]

Fergus had a fleeting moment of mirth at the piteous state Margarita was in. Pride goes before a fall. However, this was an ephemeral moment replaced in quick order by pity at her misfortune, and concern by what caused this rapid transformation.

"Margarita?" says Fergus tentatively. Fergus looks up the hill before turning to the others. "The most likely explanations would be either someone or something turned her into this, or removed her enchantments keeping her young. Whether it was an ancient curse on the circle or a person or monster we won't know until we get up there. Either way, something wicked awaits us atop that hill. Tamaran, circle around and get behind the hill. The rest of us will make our way to the top. Whatever is up there was able to render a powerful source powerless. Be cautious." says Fergus

Tamaran nods in affirmation of the witchers words he was not going to argue with a man who did this for a living, beckoning to his wold Tamaran begins to circle round averting his eyes from what ever was infront of him.