Fergus watches as Kyness slips back into the fog. He grins at her retort, knowing it was said out of fear. Fergus followed after Kynee, his sword at the ready as a stone reared up out of the fog he realized he was in the middle of the stone circle. Grinning he stopped made a complex symbol with his hands. An almost imperceptible shimmer came into being around him. He struck his shield with his sword three times

Streaming from Talashia’s fingertips, the flurry of winds cuts through the oppressive mists without relenting.

While they are still just as impenetrable to vision, the mists yield their clenching grasp like a slipstream through which the wolf Shamra darts, sniffing at any trail she can smell. While the magical winds would confound any natural scents, Shamra is no natural wolf, and neither is her quarry wholly natural. She manages to pinpoint Kynee and the old witch’s location, relaying that back to Tamaran with fleeting flashes of insight in his mind – the type of connection only elf and spirit wolf could understand. Every step requires Tamaran’s utmost focus, his elven awareness guiding him to just the right places to avoid the clutching hands of mist.

When Fergus feels the gale force winds streaming from Talashia’s fingertips, he instinctively drops back, sword and board at the ready for the treacherous witcheress.

The mists swallow your sight, vague silhouettes looming and strange echoes fading into a cacophony of whispers, like a choir of voices just barely audible creeping into the mind. Some whispers seem to come from the standing stones themselves, others from the creatures lurking within the mists.


Talashia’s winds beat down on the witcheress and old witch; an angry hiss comes from the witch as the winds tumble her across the ground, the sounds the only clues as to what is happening in the pea-soup mists. Eventually, however, the mists will give way to the conjured winds. Strange whispers come from somewhere in the mists, as if the old witch and Kynee were communicating through an old kind of magic. Abruptly, there is hiss of Elder Speech followed by a whimper from the wolf Shamra as a billowing cluster of hands carry the wolf spirit aloft, vanishing into the mists, its corpse not to be found as it has been sent back to the spirit world. 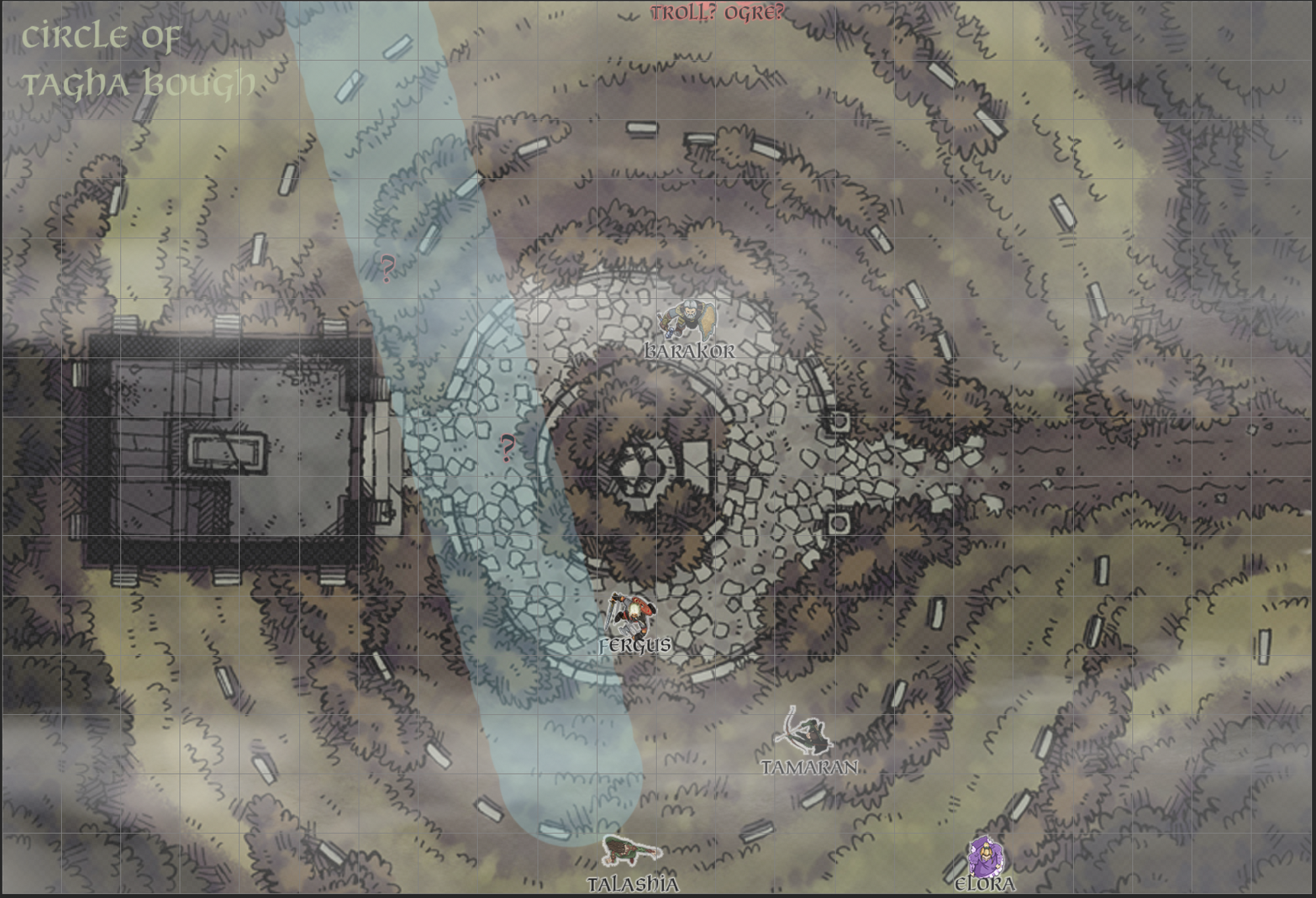 Listening below the ambient noise, to a more primal instinctive noise, the sounds made by predator and prey, Barakor picks up a twisting of the ball of a foot on the moss-covered ground followed by the slightly clinking of glass. To the northwest, a skilled warrior lies at the ready.

(but what about Barakor's dwarven ears?)

Elora continued to concentrate on her spell, trying to keep her companions out of her mind while focusing on the three unique "voices" and their thoughts.

Barakor growls low, and moves straight for the sound of Kynee the Cat.

(once he gets to the uppermost question mark, can he see her at all, since her square isn't fully fogged?) 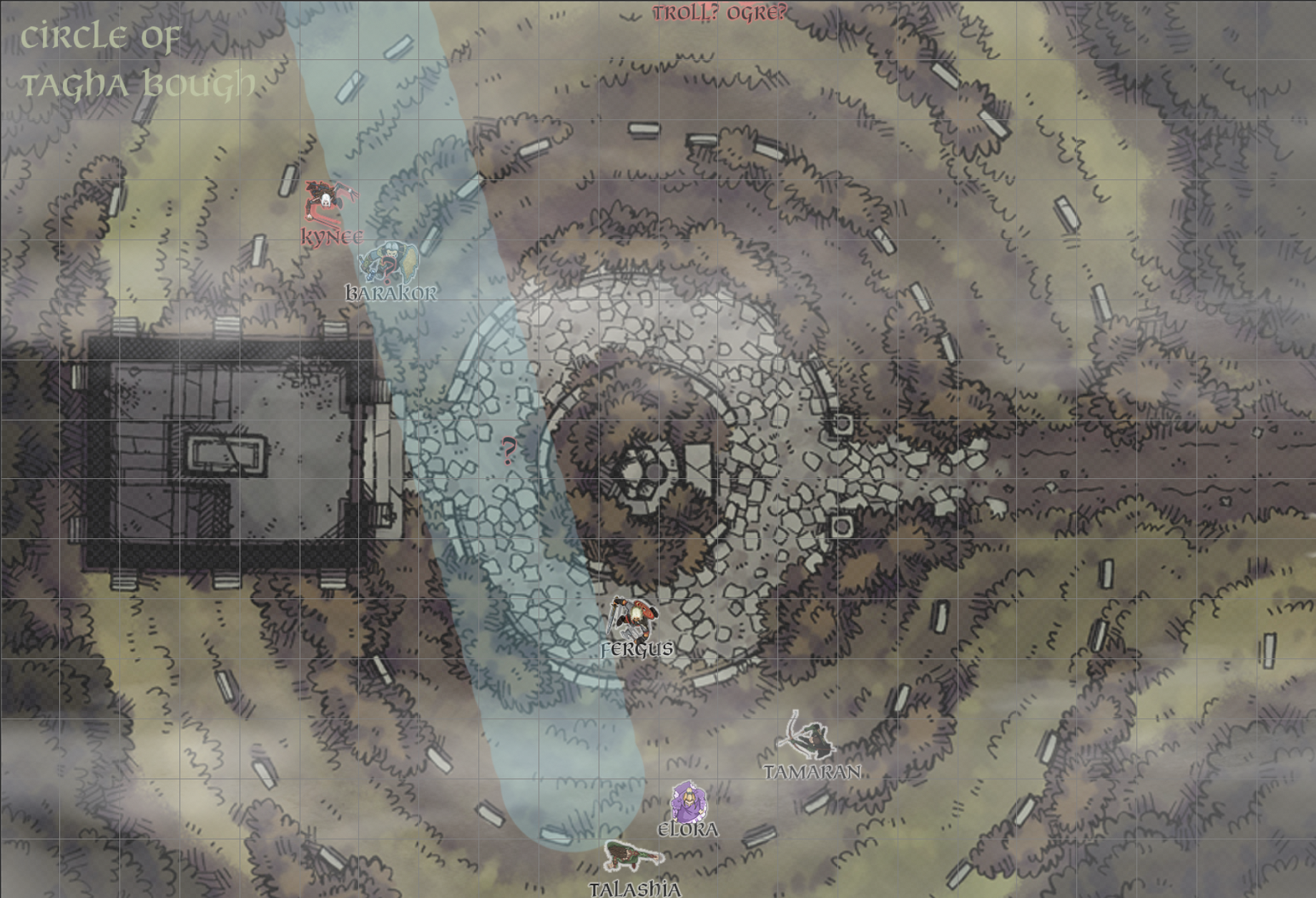 Drawing closer to Talashia, Elora’s senses cut through the supernatural mists, extending out to the sepulchre’s steps and the silhouetted statue at the center of the old standing stone circle. She can no longer sense the presence of the old witch or Kynee within 30 feet of herself; they must be withdrawing… or relying on other magics… or lying in ambush.

Careening through the mists, Barakor feels a strong sustained gust of wind from the south threatening to lift him off his feet. Intermittently, he gains fleeting glimpses of his surroundings as the clutching mists are repelled again and again by Talashia’s magic. From the corner of his eye, motion! The witcheress Kynee is cunning, readied rapier darting from the mists at the edge of the gust of wind, sliding in under Barakor’s guard and piercing into the chinks of his blackened chainmail (17 damage).

Tamaran keeps heading to the last location his Wolf relayed to him, however the elf is distracted perhaps by the grief of losing his companion or maybe it is something else.

"Augh, witch!" Barakor snarls as the rapier digs into his flesh. "Was it you? Was it you who brought the Darkness on my people?" His voice trembles as he cannot help but remember the bloody slaughter and the madness that befell the dwarves of Mahakaim. He makes a half-hearted swing at her, but the winds and the fog and the fear make it a pointless attempt against the wily witcheress. 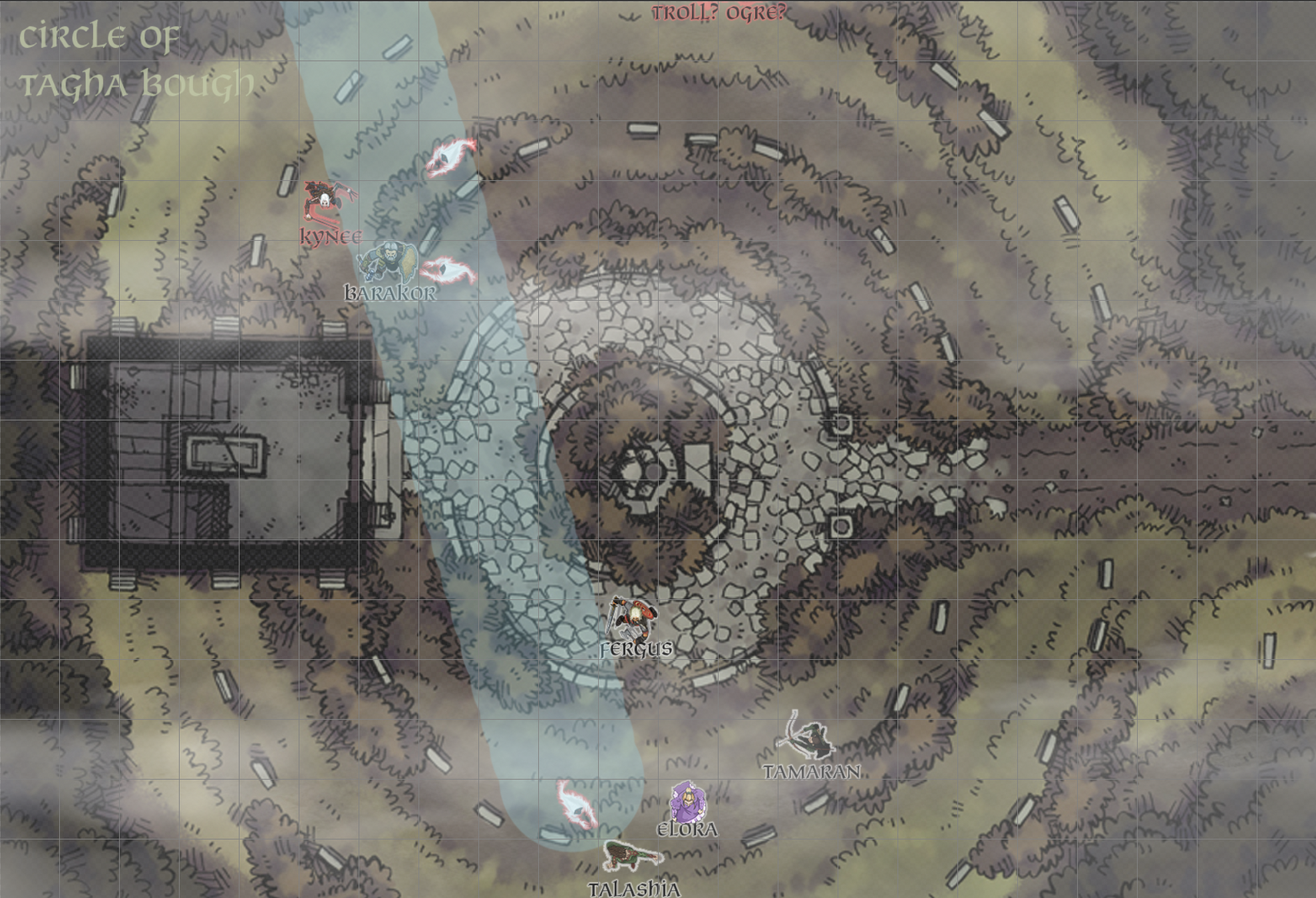 Whispers in the mist, raspy voices flitting through the air like foul feathered things. It is the Elder Speech. As Tamaran focuses on the voices, he can hear traces of old human men speaking three distinct phrases repeatedly, their voices emanating from the weathered menhirs (standing stones): Vestments torn yet hidden… Forgive the peasants… Bound in stone…

However, some ancient magic lies within the voices, seeping into Tamaran’s mind, filling him with an overriding thirst for vengeance. His brothers-in-robes were killed, the druids of Tagha Bough cut down before his eyes. The memory is not his own, and yet it is inescapable, as real as if it happened yesterday. Hissing as she effortlessly sidesteps Barakor’s warhammer, the witcheress Kynee’s eyes flash yellow and black for a split second. She speaks in Dwarven, ”Your people are their own undoing, Barakor Bloodbarrow. What happens now far eclipses Mahakam. You can’t conceive of it.” Her voice seems to fade into the mists as Barakor’s warhammer collides with a fissure in one of the standing stones, wedging firmly in place.[/SECTION]

Echoes in the mist are momentarily swallowed by a midday thundercloud booming in the distance, and then the whispers become magnified, whispers of murder and justice coming from every direction. Wisps of mist congregate around the menhirs closest to Barakor, coalescing into vague spectral humanoid shapes which are infused with fell light briefly emanating from the stone. Hateful eyes blazing like balefires beat down upon the dwarf as the two spectral creatures moan in outrage. To the northeast, Barakor can make out chanting in Elder Speech coming from the mists beyond Kynee.

Another spectral shape emerges from the menhir nearest to Talashia, revealing the visage of a woman with a twisted face and burning red eyes. Murder leaves her mouth without her lips moving. The whispering hateful voices come from everywhere in the mist, suggesting that there are far more of these entitites than you can see hidden in the mists… 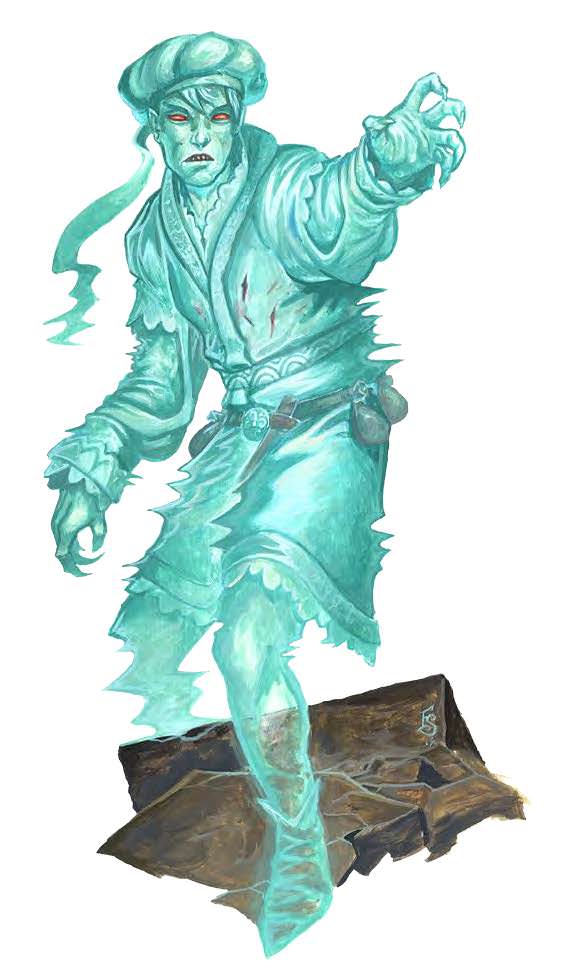 Tamaran sees something and hears something, no, he felt it like a memory but not his? The next thing he feels is blinding rage, not fully in control of his actions the elf charges into the mist.

"If it's vengeance you crave," Talashia snarled at the spirit, "I suggest you help us against the hag. The death of Nan would be fine justice, yes?"

Then, just in case it wouldn't, she wove a spell with her right hand, even as she continued to direct the gale winds with her left. Mist and fog writhed around her, carved by eddies of breeze into startlingly realistic images. A cloud even moved over her, so that in that moment it was very hard to tell what was the cloud-clad Talashia, and what was the misty duplicate.

That same breeze sent her, ephemeral doubles and all, vaulting through the air to land some distance away on the other side of Elora. She moved her arm to keep the corridor of wind aimed at Barakor...the angle of it now making Elora and Fergus within the corridor of relative clarity that it created in the fog.

"Angry ghost on the left," Talashia let Elora know lightly. "Though if you can slow down Kynee that will be of great use. I'm going to have trouble using another spell of any power while I'm trying to keep this wind focused."

(casting Mirror Image, and as part of that action I fly over to Elora's other side and change the angle of the Gust to keep it on Barakor.)

Barakor, wrestling with his trapped Wulffleda, keeps his eyes and ears keenly fixed on tracking down the treacherous Cat. 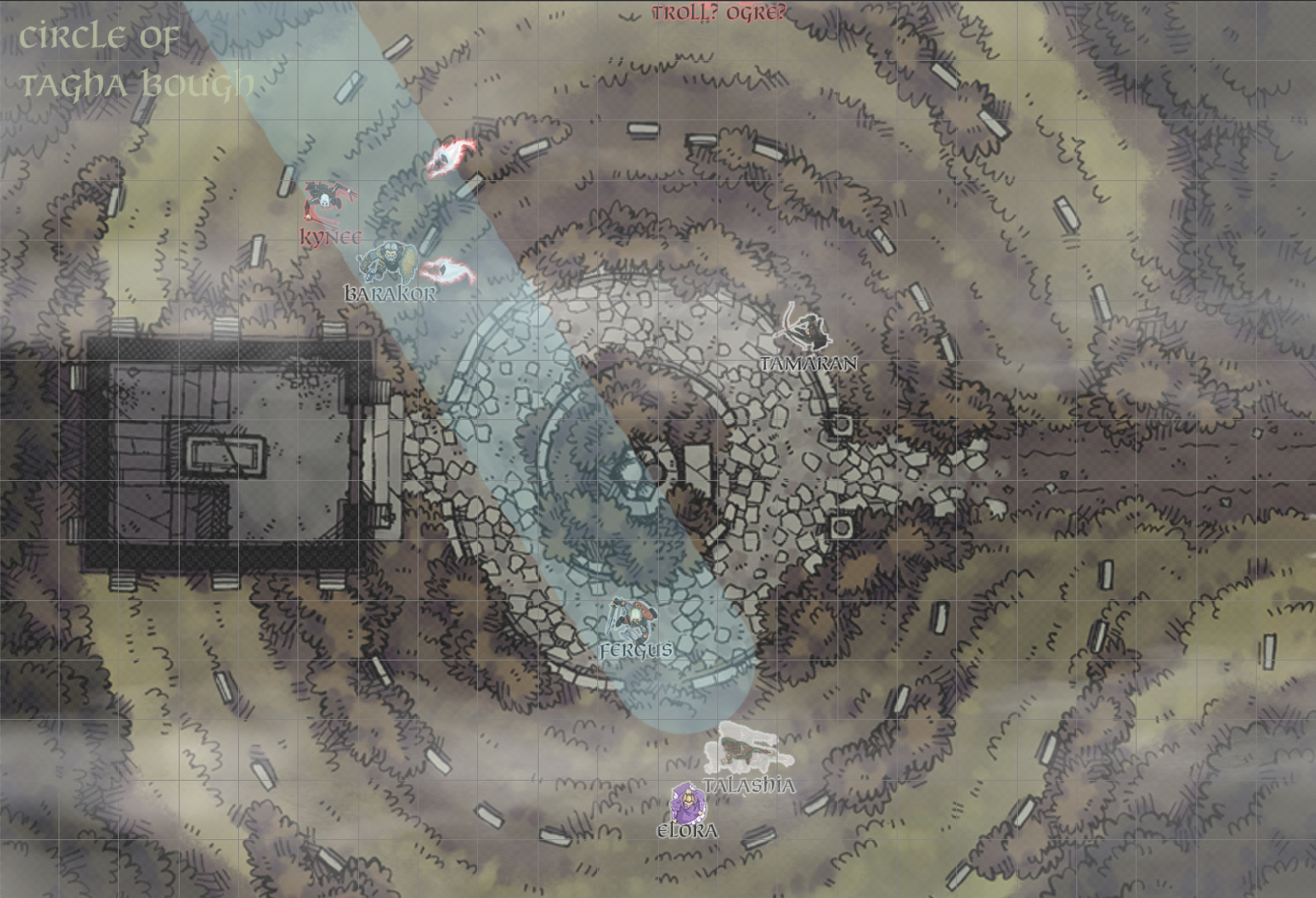 As Tamaran launches himself headlong into the grasping pea-soup mists, he can hear the murderous hissing of awakened spirits behind him, to his side, and ahead of him. His reflexes keep him just out of the grasp of whatever spirits lurk in the mist, his shins clipping a small rock wall which he clears at the last moment. There is a spirit somewhere close to the elf, causing the hairs at the back of his neck to stand on end.

Talashia's magic has thoroughly repelled all mists within the line of her focus, giving her clear line of sight to Fenris, Barakor, and Kynee who no longer benefits from concealing herself in the mists...at least for now. However, the impenetrable mists continue to have a semi-solid almost molasses-like consistency outside of her gust of wind.