SInce several, multiple ships follow a similiar theme, in some cases, I decided to create chapters (each 5 - 10 pages long) to focus on specific ships, cultures, regions of Spelljammer space these ships originate. I'm thinking a star system with multiple inhabitable worlds - planets and moons for the Olmec Confederacy. My Quetzalcoatl ship illustration shows the Chacoan moon as it's location, one of the inhabitable worlds. I may do one of the capital on a fantastical jungle planet - then show a map of the star system.

For my Lolth's Handmaiden, and for a Spider Nest and it's gigantic spider inhabitants, I'm creating the start of a Drow city inside a gigantic amethyst geode, that's been half filled with melted asteroid ice to create a lake. Then the city is essentially a stationary boat, a floating city inside the geode. Here's the illustration for that... 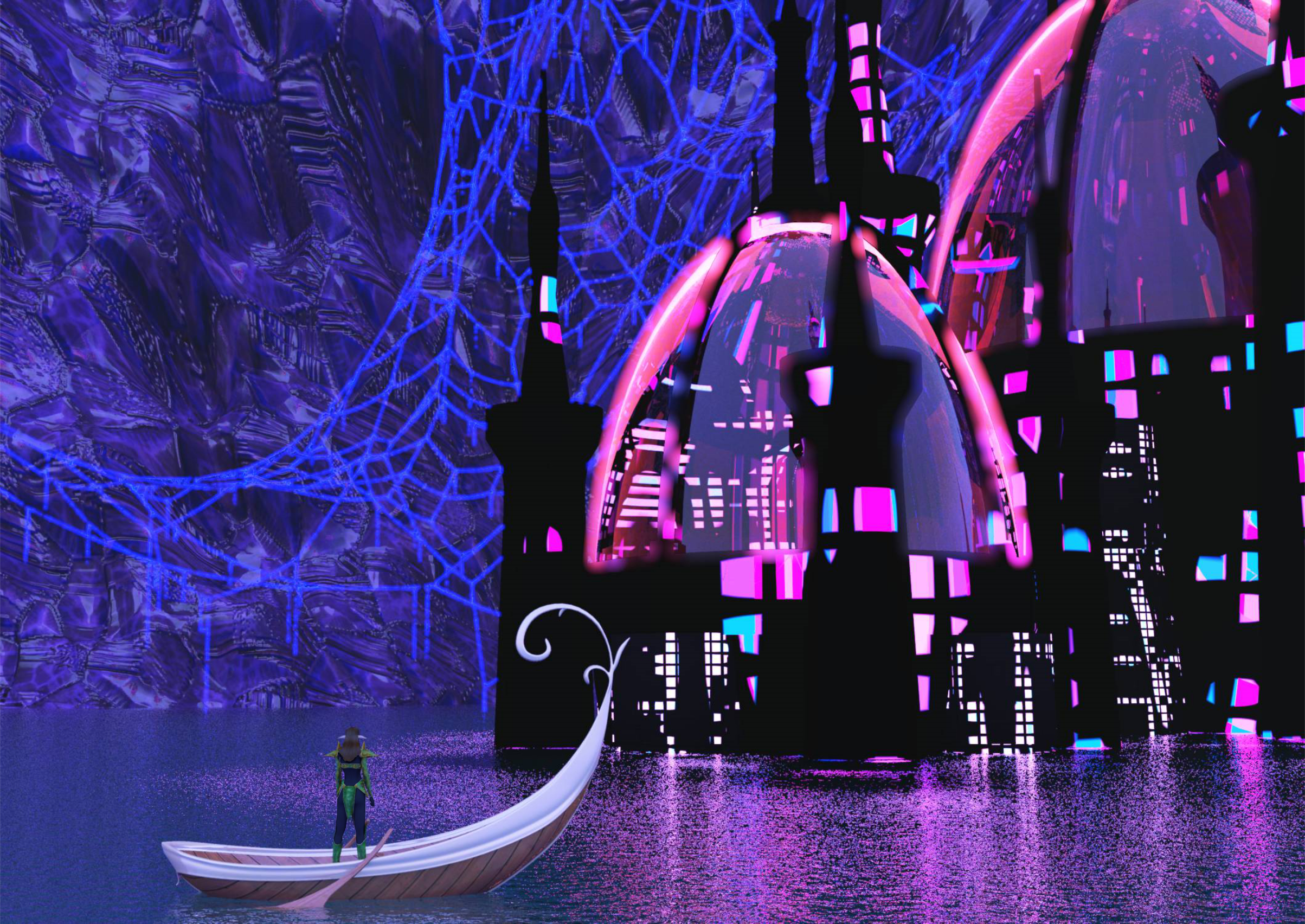 Because Japan is an archipelago of islands large and small, I've decided that my Spelljammer Japan lands was once a thriving planet, that was visited by a massive near orbit planet in an eccentric orbit that caused the world to come apart, separting the Core from the Mantle and the Crust into large chunks like asteroids, but have settled into a stable orbit. Because the rocks are so close, their air bubbles overlap, and there is a single sky. Bridgings, cable cars, zip lines connect many of the closest rock pieces, while those further away require small boats to access. Here's a view from Lady Kumiko's veranda looking at the evening sky... 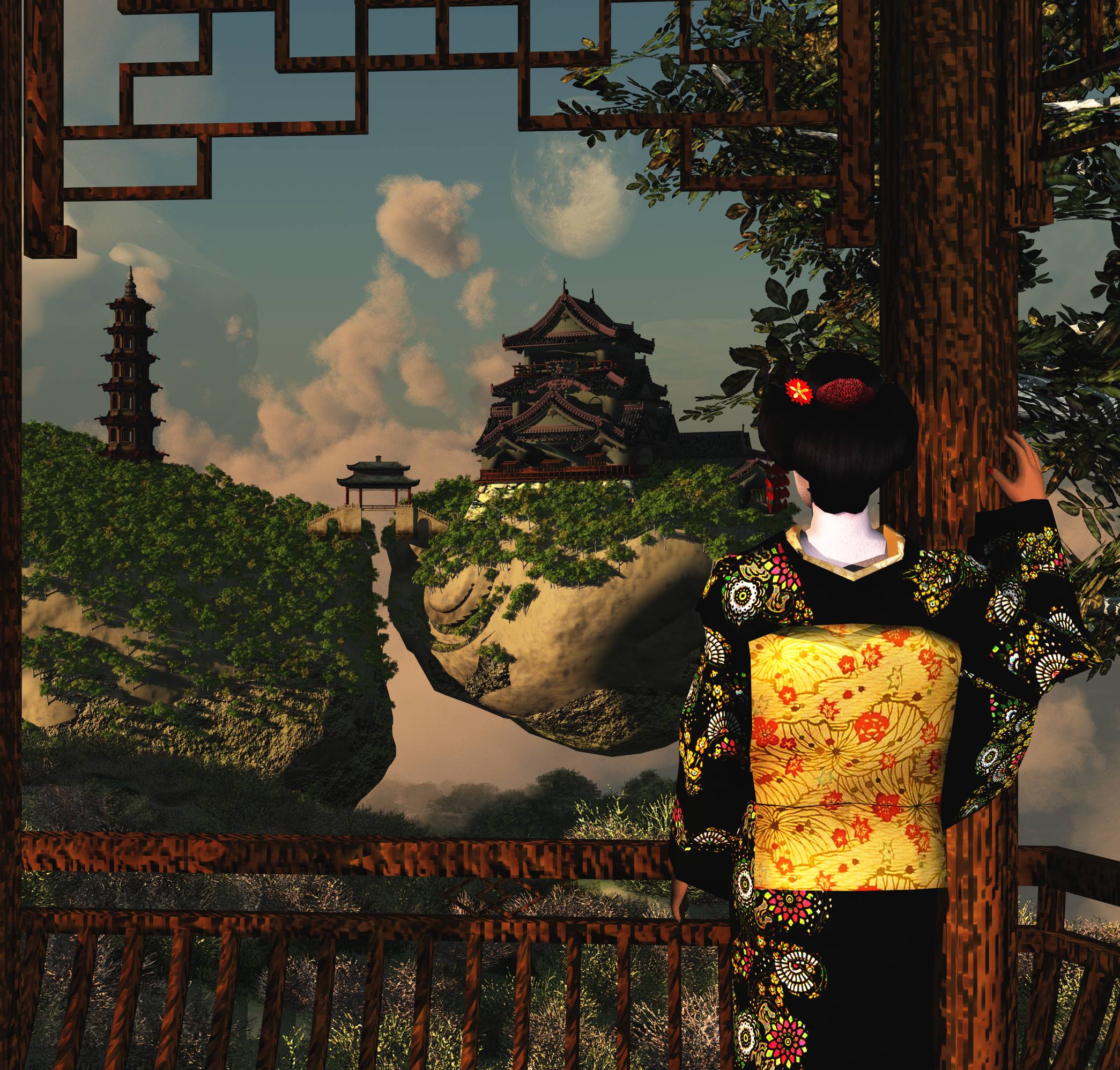 Xalapa is the capital and planet of the Olmec Confederacy, a mountainous jungle world with extensive underground river systems throughout reaching the seas. The Olmec were among the first Spelljamming cultures, just shortly after the Egyptian introduction. They have since returned to the Earth on several rescue missions to bring entire cities of subsequent indigenous civilizations before others would come and destroy their worlds - as predicted by Olmec prophecy. Among their retrievals were Aztecs, Mayans and Chacoan peoples. Each live on a different moon that orbits the gas giant, Chac Ixchil, the storm god and his consort, Lady Rainbow in the Olmec/Mayan pantheon. There is said to be a constant storm beneath it's tranquil rainbow surface.

The King and the Temple of the Moon ship returns and is landing at the capital. 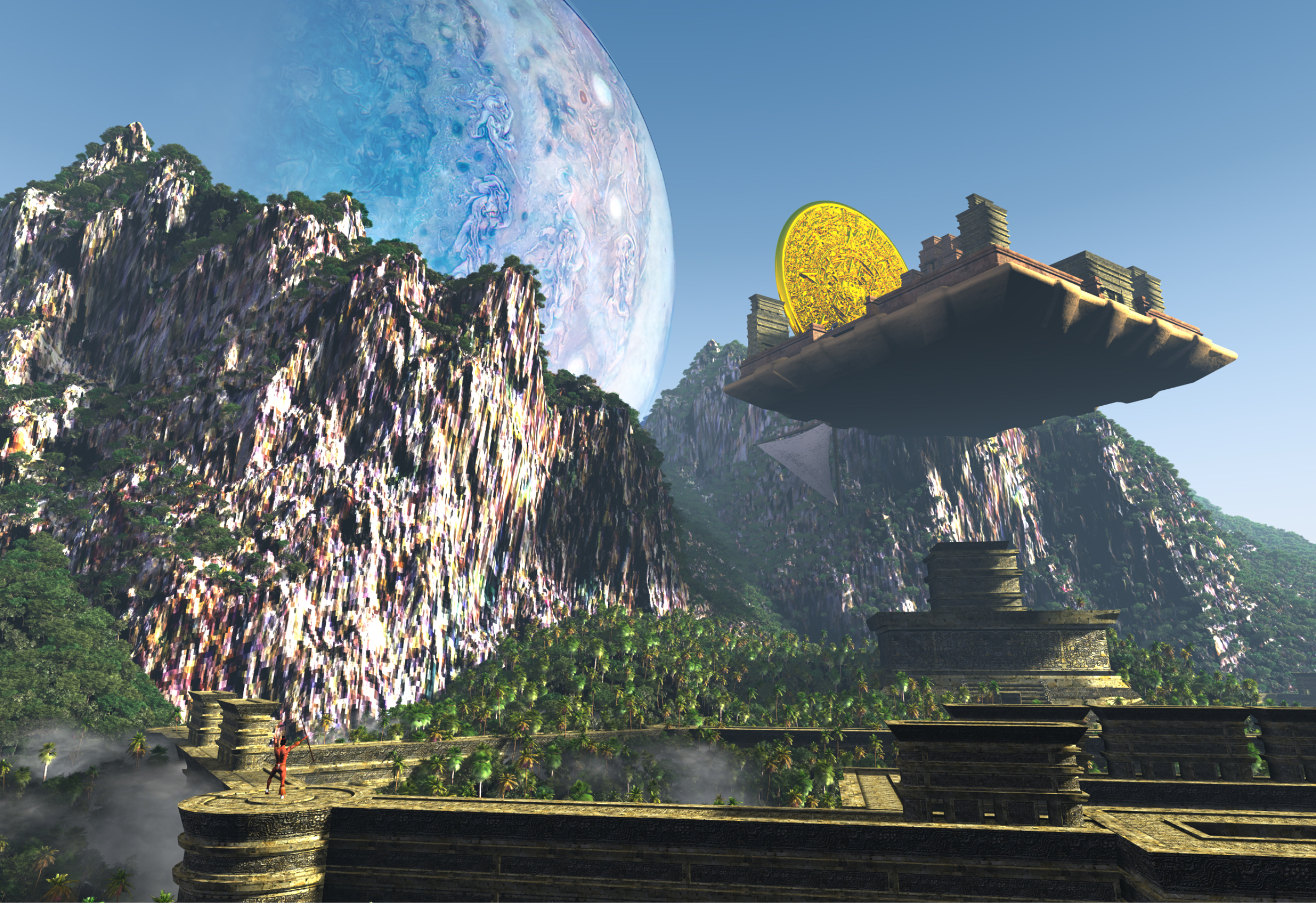 Only mentioning that the Sahuagin with the Deep Space Angler and Astral Pirahna ships are from an ocean planet, no surface land. Only land ever revealed during high seas where the nearest surfaces break the water for moments at a time. But still felt compelled to create something for them. Several of the operating bays of Sahuagin spelljammer ships are wet bays (fully submerged) including their helms as depicted here. I don't know why, but I imagine spelljammer helms as featuring a wizard's glass (crystal ball) to view the ship and it's surroundings in combat, and wider views showing entire navigational route being taken. So that's the big glass ball in front of this Sahuagin captain at the helm... 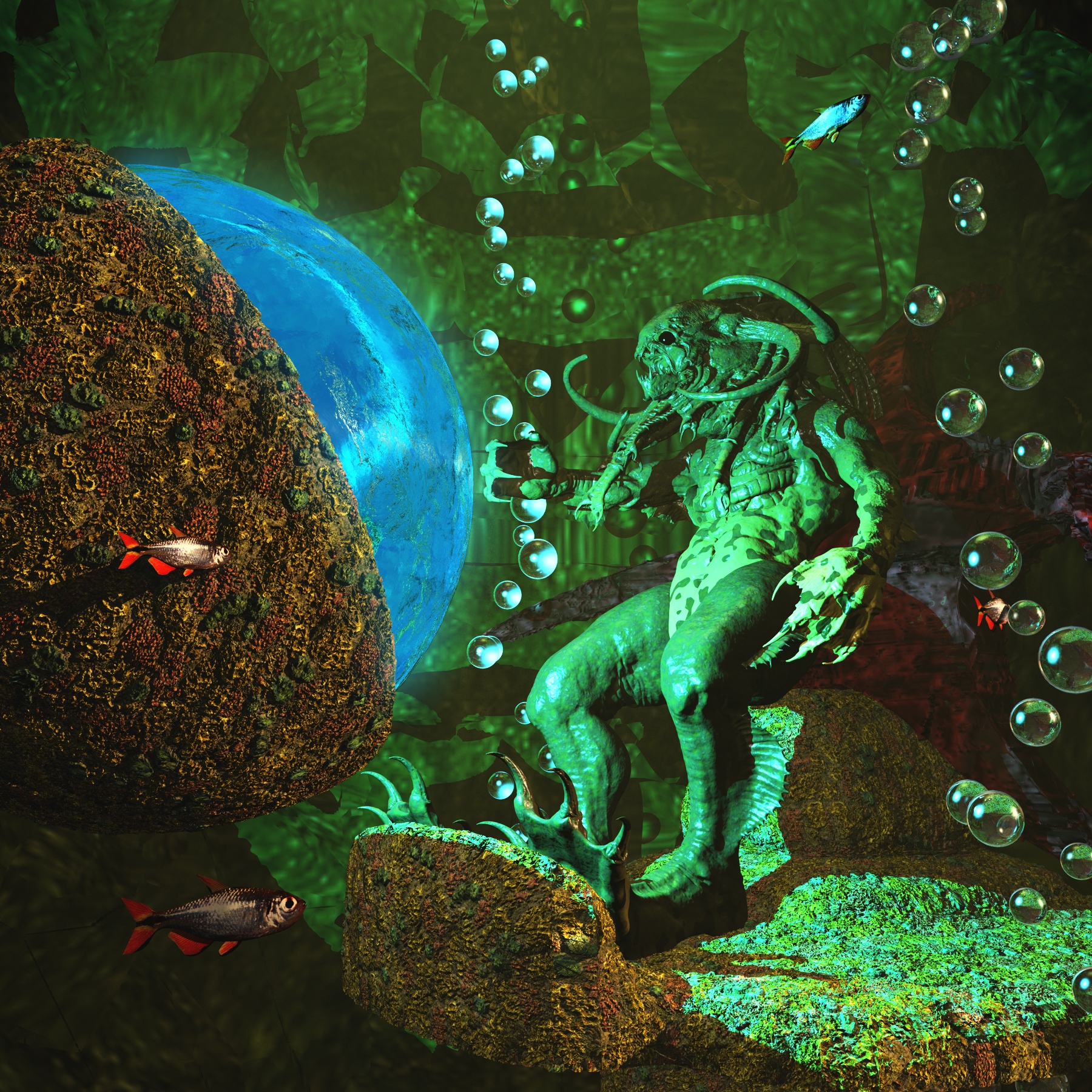 Decided I'm doing one Wild Space System, and calling it the Phoenix Nebula System which has the Peregrine Binary star system inside it. I've created both the Phoenix Nebula illustration, which works for now, unless I can figure out a better way to create it. Phoenix once was the third star of a trinary system that included the remaining binary system, it was a giant blue star that went nova 12,000 years ago creating a vast dust cloud nebula and stellar nursury (with 3 protostars forming). The nova pushed the Hawk system into the Peregrine system creating overlapping orbits and conditions for collisions.

Of the named worlds on the map, that aren't already ilustrated above in some way (I've got a few more landscape illustrations to create), the worlds shown include:

Zephyr - small gas giant, more notably it's single moon is a jungle world with a colony of astral elves there, including a young prince.

Enigma - large earth-like world, with a 12,000 year old lost civilization of technology beyond anyone's understanding with huge ruined structures in the overgrowth, a sky elevator connected to a tidally locked moon, passing through an orbiting ring - all inoperable. The second moon is fully artificial, has some sort of power source, but inhabited by killing machines, constructs perhaps. This place is avoided, except by curious wizards and archaeologists.

Ichthya - a frozen ocean planet, no land, tidally locked to the sun, with miles thick ice surrounding it except on the sun-facing side, where thin ice allows the sahuagin that live here to leave and return to their world. Aside from being a ocean planet (no surface land), and probably many deep sea smokers to create the heat for life, as it's so far away from the sun, little is known of the world beneath.

Anglesey is under the jurisdiction of the Astral Druidic Council, and where regular moots occur, a small fighting band and a tribe of werebears that serve the council protect the world from outsiders.

Orbona is an orphan planet, it shares the same orbit as Anglesey, but moves at the same speed so no chance of collision and on the other side of the sun from it. Pirates occupy this planet.

Gozar is a massive super earth scarred with it's bludgeoning of the worlds it's orbit crosses. It did not strike the Sorashima Archipelago, but it did break that world apart. "Gozar the Gozarian is the destructor..." 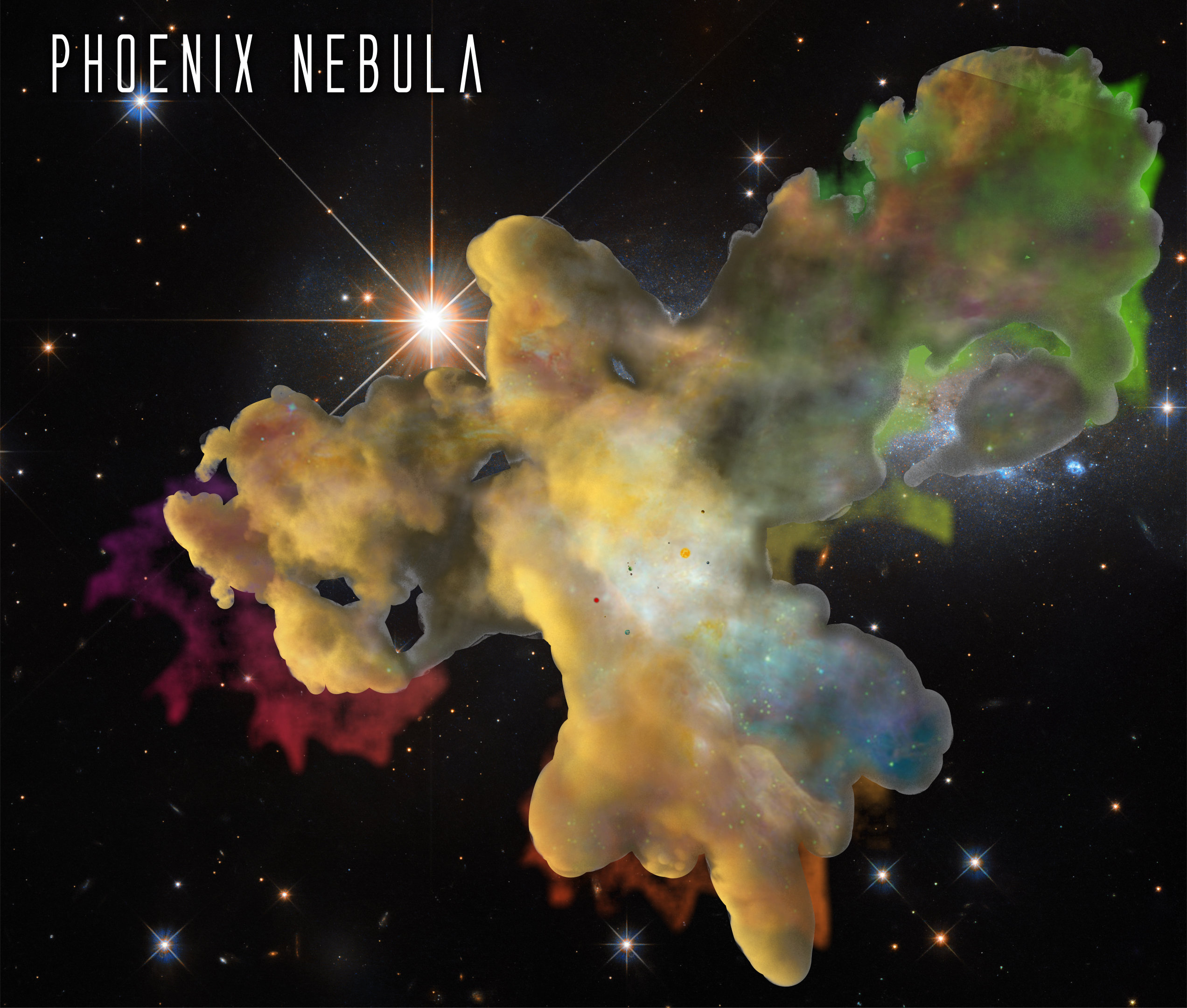 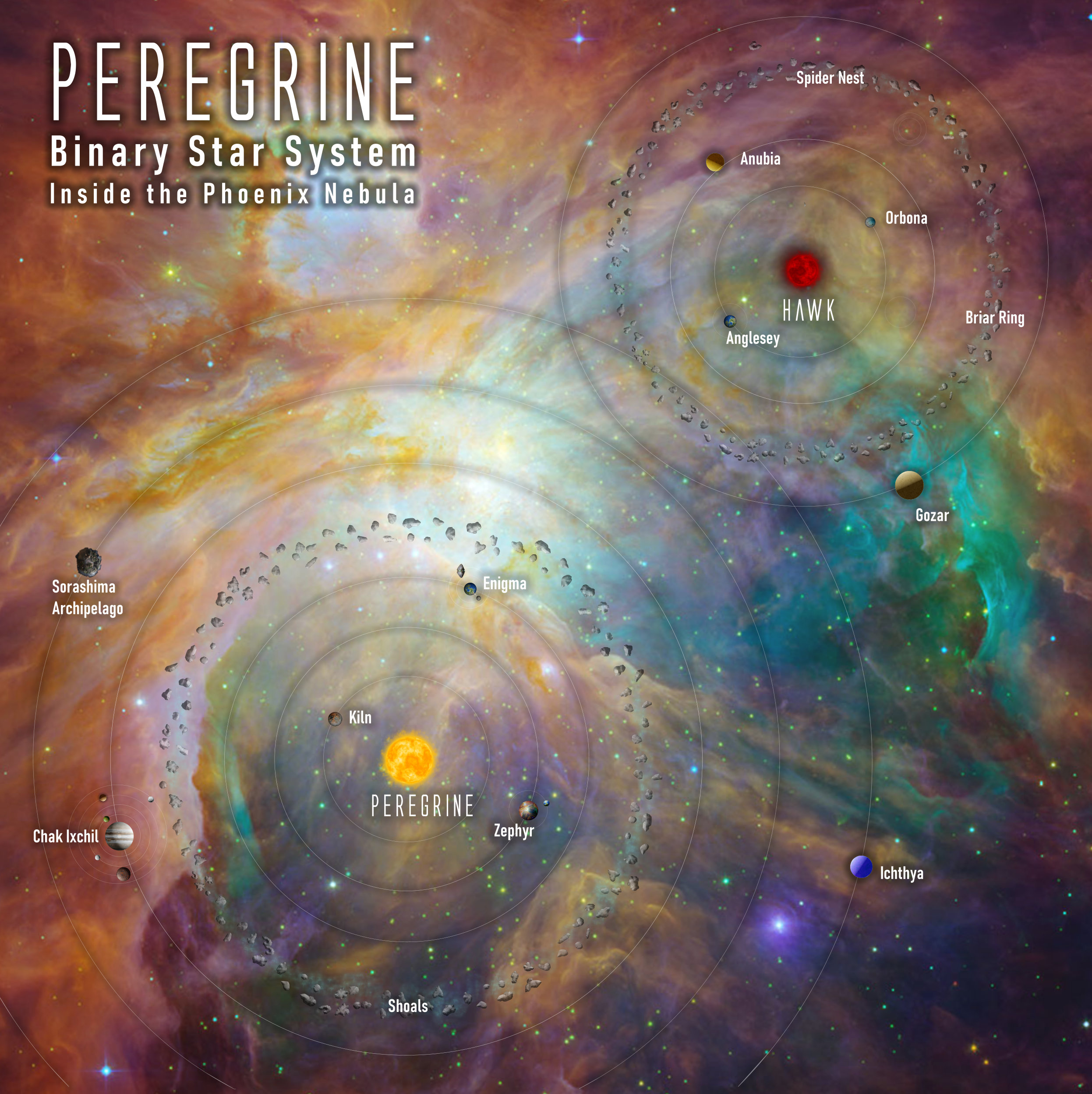 Today at 3:27 AM
Carlsen Chris