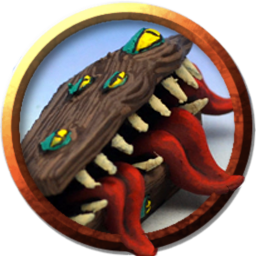 They both look so good Pogre I will obviously have to have two mimic coffins attacking at once. Right??

Nebulous said:
They both look so good Pogre I will obviously have to have two mimic coffins attacking at once. Right??
Click to expand...

Well, certainly - what choice do you have really?

If you kill a player-character with one feel free to blame me.

So, nothing super exciting this time. A bunch of 3d terrain I printed and painted up. Alleyway pieces and stumps and fallen logs. 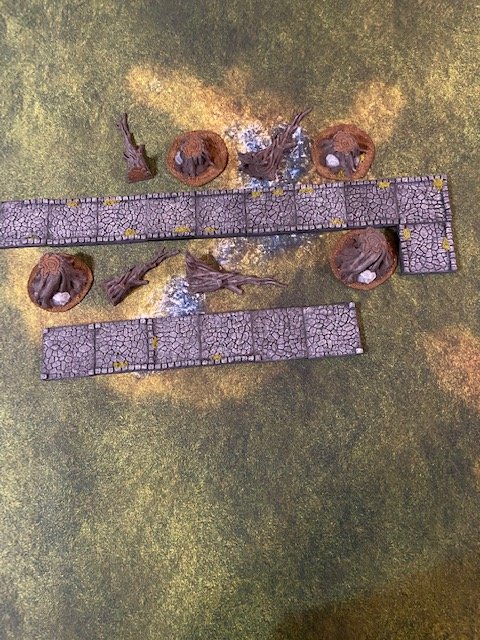 The alleys come with clips that make them stay connected. 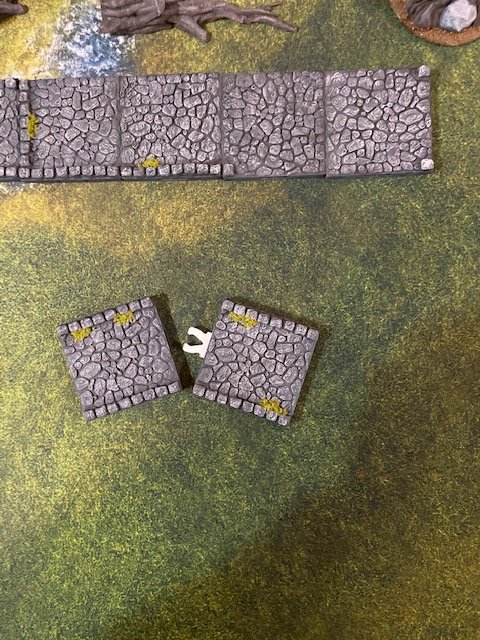 A 3D printed modular half timber house with furnishings. I was going to glue the furnishings in, but my boys talked me out of it - so, I can use them in dungeons.

Furnishings in the lower level.

Furnishings in the upper level.

That is some really nice looking stuff you are printing up... I'm just a little jealous I almost done with my Bones minis (until #5 arrives next year), I'm going to be stuck with paper craft

I'm busy printing a some ruined versions of the same houses. Yours looks great. Figured I could use them for D&D (Thundertree?) as well as Frostgrave.

Badvoc said:
I'm busy printing a some ruined versions of the same houses. Yours looks great. Figured I could use them for D&D (Thundertree?) as well as Frostgrave.
Click to expand...

I have been really impressed with these modular pieces - lots of possibilities. The paint job looks much better in real life - the flash really washed out the color.

I hope you post the ruined versions - I want to check them out!

I use a bunch of the Miniature Building Authority stuff for my ruined stuff - I grabbed about a grand of their buildings when they had a big package deal a few years ago to use with Mordheim. However, I have not purchased any since then - between Hirst Arts and 3D printing I can make whatever I want and paint it to look much nicer.

Lately, I have been spending money on tabletop mats from various companies. I played on felt for years and years, but these mats are awesome. Here is a shot from an OldHammer game we played the other night:

Years ago I published a number of painting articles in a now defunct hobby magazine. I did a number of step-by-step miniature paint jobs, and some of the most popular were the speed painting articles. Since that time (early 2000s), the hobbyist has a lot more tools for speed painting including Contrast paints from GW and now, Instant Colors from Scale 75. The down side is a lot of these new tools are fairly expensive.

I use Contrast paints, but I started speed painting way before these were available. I thought I would share how I painted this figure very quickly. If you would like me to post a true step-by-step sometime - let me know. I looked for some of my old articles, but sadly, those are all gone.

I start with a figure that is conducive to speed painting. This is typically a large abomination type monster. I'm going to take my time on characters and key npcs, but let's be honest, I am throwing these figures on the table for one encounter - and their job is to maybe scare the PCs, but ultimately die in droves!

My standard for my speed painting is a figure that anyone would say is nicer than a pre-painted figure. If you run a game with a lot of pre-painted figures there is nothing wrong with that, but they really are not cheap these days.

Let's use this monster for an example. Below you can see a pre-painted Hook Horror. As pre-painted models go it's not too bad. However, a quick google search will reveal you are throwing down between $18 and $25 for this model.

The figure I am painting is a Bones Black Gloom Stalker - retail $7.99 and readily available at major online merchants for $6.55.

From start to finish this figure took 36 minutes of painting time. Naturally, that's not counting drying time, but it is easily doable with drying time in a few hours. If you used a hair dryer you could easily finish the whole thing in well under an hour.

Step One - wash the model with a touch of dish soap and water.

Step Two - prime it black with a brush on primer. I use Vallejo black primer. I prefer spraying models, but some sprays react badly with the Bones material - it stays tacky even after you finish it. If you have an airbrush, by all means use it. I have a nice air brush, but no booth currently. Maybe some day!

Step Four - Paint most of the model purple. I was going to use a Contrast paint for this. However, I did not already own a GW Contrast Purple. Plus the cost of a bottle of the stuff is more than I spent on the model and I was going to use quite a bit. I don't normally watch YouTube, but this guy over at Goobertown's video on making your own Contrast Paints caught my eye.
Goobertown Video

I don't know the fellow, but he seems pleasant enough. I recommend speeding up the video - I found him very understandable at X1.75 speed.
I have some original GW inks and a fair amount of purple. I mixed some old GW purple ink with some Liquitex Matte Medium in equal parts and added a bit of flow extender.
The result was an ink/paint that behaved a lot like Contrast paints. And, as I had all the stuff on hand, saved me $8.00.

I avoided the head, stomach carapace, hooks, and claws. I used a big cheap brush and covered the rest of the figure. The nice thing about inking over a black figure dry brushed with white is shadows are very nearly automatically created.

Step Five - While the purple dried I drybrushed the base in successively lighter shades of gray right up to nearly straight white. The figure comes with a great base, so that saved me some time and was going to almost immediately make it better than the pre-painted model.

Step Six - I touched up the head, hooks, underneath carapace, and foot claws with the same off-white I dry brushed with - I was a little too sloppy with my purple.

Step Seven - I covered the head, hooks, underneath carapace, and foot claws with GW Contrast Skeleton Horde. If you don't have Contrast Skeleton Horde here is a quick ink alternative: 2 parts brown ink, 2 parts orange ink, 1 part yellow ink, and 2 parts water. I used that formula for years to create my bone ink.

Finished - I could have spent a lot more time on this figure, but it will look great in the dungeon. There is also a certain satisfaction in starting and finishing a model quickly. It is welcome break from terrain painting and more detailed layer painting.

I have to admit, with that title I'm a little bit disappointed that the hook horror doesn't have racing stripes.

Your paint jobs and the sculpts of the models you select evoke gaming for me! You’re very talented & skilled, and it’s a pleasure seeing your work. Thanks for sharing it.

SavageCole said:
Your paint jobs and the sculpts of the models you select evoke gaming for me! You’re very talented & skilled, and it’s a pleasure seeing your work. Thanks for sharing it.
Click to expand...

Thank you for the kind words!

I started working on some 6-inch by 6-inch river/stream tiles. This was my test tile. I am trying to keep the costs down and have something that looks decent on the battlefield. I am open to suggestions on how to improve.

During the pandemic my youngest son, Keegan (age 14), has been busy painting. He has so much more skill and talent than his old man when I was younger. I love his clean vibrant style and present these miniatures as an unapologetic Dad brag.

First up is a hydra from Crocodile Games. Many of these figures or so large I have poor focus on some of the photos.

A Carnosaur from his Lizardmen army.

A whole bunch of Cold One Riders

So, the next one is a figure he just completed for his current D&D character. He is playing a satyr sorcerer. First he took the body of an old Heresy Feral Warrior and took the head off an old Mordheim figure. He sculpted horns on the head using greenstuff. Pretty cool conversion:

Hi last PC acquired an elephant (don't ask). He took one of my old Ral Partha elephants and planted a Brettonian knight atop it. He had to sculpt some tack and saddle.

Finally, one of the first figures he painted this year - a wizard from Reaper.

Amazing output and skill for a guy starting high school this fall!

In the nearish future I will post some of the great stuff my second-youngest (16-year-old) has completed this spring and summer.