So, the Dread Metrol book recently dropped. It looks rather interesting. And I have been wanting to try out DMing a PBP.

System: D&D 5e.
Setting: A hybrid of Eberron and Ravenloft.
Looking for 4 to 6 players.

Official books and also the Dread Metrol book will be allowed.
Players will be starting at level 1, and can either be from Metrol or Eberron proper.

As a horror game, the book has the following warning attached:
Content Warning
Like many other domains of Ravenloft, Dread Metrol is a terrible place, a city caught in the horrors of endless war. This book and its accompanying adventure delve into dark, challenging topics—several of which player characters themselves may be subjected to.
The domain presented in this book emphasizes the genres of body horror and dark fantasy. It includes themes such as the following: non-consensual human and animal experimentation, abduction, surveillance by an authoritarian state, political propaganda and brainwashing, memory modification, harm and death of children and loved ones, mutilation, cannibalism, corpse-eating, ableism, and psychological trauma.

Another warning, you will be subjected to my grasp of grammar, which is a product of the US public school system.
Last edited: Jul 31, 2021

I cannot believe nobody reacted before me.

I'd love to join this! Don't have the book, and for the sake of avoiding spoilers I won't get it for a while, either. But yes, very much yes.

JustinCase said:
I cannot believe nobody reacted before me.

I'd love to join this! Don't have the book, and for the sake of avoiding spoilers I won't get it for a while, either. But yes, very much yes.
Click to expand...

Same here. The game got diluted throughout the years so some proper horrid happenings will help

How do we generate stats, are feats allowed, do we get custom built races from Tashas, can we be dragomarked?

Some basic ideas: rune-knight fighter, monk, celestial warlock (if there are 5+ players than hell be support/secondary healer, otherwise blaster/healer)

For clarification, I'm going to be running the adventure provided with the book, it covers levels 1-3.

I'm fond of point buy, but if you want to, you can roll for it instead.

You can be Dragonmarked, and you can use the Custom Origin rules and options if you like.

I don't want to say no to feats, but seeing as how the adventure ends before adventurers hit level 4, that would mean that only Variant Humans and Custom Lineages would be able to use them. (Unless this game really pops off and people decide to keep going)
Last edited: Jul 23, 2021

Um...I would advise to choose one attribute generation method. If you prefer point buy, say it is and that's that.

I would like to go on after 3rd, but that will be two or three years from now in pbp.

Ok then, point buy it is!

When do we start?

I’m pondering a half-elf sorcerer, possibly with the criminal background, inspired by this picture: 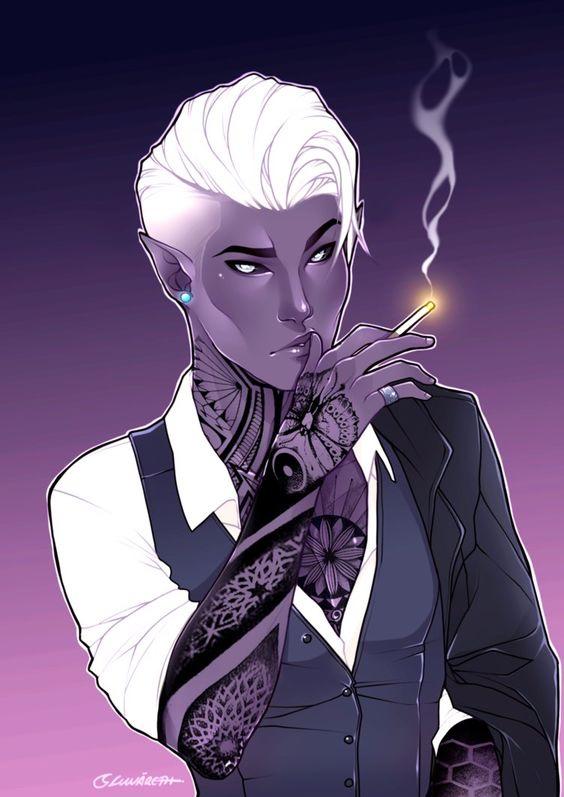 Anything to consider in regards to backstory or features in relation to the setting or story?

Lets give it a week, to see if we can gather one or three more people. You can begin planning out your characters in the meantime.


JustinCase said:
Anything to consider in regards to backstory or features in relation to the setting or story?
Click to expand...

The main thing to consider is The Last War and The Mourning.

As a brief refresher, The Last War was a war of succession where the Five Nations (Aundair, Breland, Cyre, Thrane, and Karrnath) were fighting over who got to control the throne of the Kingdom of Galifar, and by extension most of the continent of Khorvaire. It lasted for just over 100 years, ending after a magical disaster called The Mourning literally wiped the nation of Cyre off the map. To this day, nobody knows what caused The Mourning, and there is no shortage of theories about it.

With their nation destroyed, what few Cyran refugees lived through the event fled into the neighboring lands. Some met with temporary shelter, some turned away at the borders, and some met with blades in hand. Nowadays, while Cyrans can be found nearly everywhere in Khorvaire, some were able to establish communities. Notably New Cyre in Breland, and Hope in Q'barra. Prince Oargev ir'Wynarn is the defacto leader of all Cyrans and would give anything to find out exactly what happened.

After The Mourning in 994YK, the Treaty of Thronehold was signed in 996YK, officially ending the war, freeing the Warforged, and recognizing the sovereignty of (most) newly forged nations. The last two years have been met with an uneasy cold-war-like peace, small skirmishes still abound, territory is still disputed, but none want to start up another full scale war lest their nation be destroyed next.

Every character from Khorvair has had their life shaped by these events, and nearly all of them (save for a sparse few newly forged Warforged) have lived most of their lives with The War being constant.

Also something to consider: Are you from Cyre (and especially Metrol) or Thrane? Cyrans, as you can tell, will have a special connection with this adventure. And Thrane had several armies in Cyre which were lost on the Day of Mourning.

Does that mean we start in Eberron like ‘normal’, as in: The Last War is over, the Mourning happened and we were not in Metrol when it happened?

Cool. I think my still-nameless half-elf will be Cyran. Still thinking about the details.

There are a significant number of people who managed to make it out of Metrol on the Day of Mourning, mostly by lightning rail. (The other Eberron Domain of Dread, Cyre 1313, deals with the last train of people who couldn't get out in time.) Survivors all have their horror stories about how they ran from the mists watching their family, friends, and neighbors fall behind them.

But if you want to start off being trapped in Dread Metrol, that's easily workable. There is a chunk of an alternate lore dump (The book has a handy Players Edition that leaves in the setting information but leaves out the adventure if you are interested) and an alternate starting scene that could be ran in parallel.

Personally, I think it would be cool two of the PCs were friends or family. One trapped in Metrol and one who managed to escape.

Supporter
This sounds fun. Maybe there's room for an Artificer? (let's lean into Eberron and say he's dragonmarked). Maybe a Gnome scribe who was forging documents to help refugees from Cyre avoid being arrested?

Kobold Stew said:
This sounds fun. Maybe there's room for an Artificer? (let's lean into Eberron and say he's dragonmarked). Maybe a Gnome scribe who was forging documents to help refugees from Cyre avoid being arrested?
Click to expand...

A member of the Notaries Guild could easily forge up some false identification papers. Not many refugees were arrested, but it would have certainly helped get past border guards who would have otherwise turned them away. Nowadays the Cryans don't have much need for fake papers, but for the year or two until the treaty of Thronehold it would have been a blessing for those who received them.

This leads to a question: Were you ever found out, and if so, by who? Dragonmarked Houses operate on a legal system known as "The Korth Edicts". Members of the house count as citizens of Galifar, but are not beholden to any particular nation within. Instead, they are not permitted to own land or noble titles (though they have their own titles), and solve crimes against the House with their own internal affairs units. Normally, House Sivis would be furious with one of their own forging official documents, with the punishment being getting kicked out of the House! However, if the person who found you out was sympathetic to your cause, they might have just chastised and demoted you, for a favor to returned later. On the other hand, if they were of the more unscrupulous type, they could have press-ganged you into a corrupt office of the House working alongside organized crime rings like the Bromar Clan.

Lots of directions to go from that, and artificers can be fun!

And I could make a link to the Boromar clan, too, creating a connection between our characters if you’re up for it. Maybe my PC was your in-between contact?

I’m still looking for ways that my character was involved in crime, apart from “connected to the underworld”. Perhaps extortion or recruitment?

I figure in addition to refugees there were many other people looking to find new identities. Defectors, collaborators, profiteers, deserting soldiers on both sides, abused spouses. I was happy to help anyone who would pay. The war was over and many wanted a new start. There was a sliding scale, but all were welcome, good and bad. All the money went to orphans and I kept none of it.

Was I found out? Yes, though there was no proof. I'm still marked and part of the House, but have been censured and have no official responsibilities beyond serving as a scrivbener or interpreter when needed. My supervisors believe they know I provided many people false papers, and that papers I made are in use even today. But I am no longer actively forging ids, unless I perceive the need is great.

I'll go with a monk (mob-k )then. Maybe recruited from the streets as an enforcer. Not very mystical monk...something tough and rough.

Of all the group concepts I was anticipating, the Hafling Mafia was not one of them

Having a group of people who are more ready to make morally grey decisions is going to be interesting to watch for sure!

I will go with dwarven fighter...I would prefer if someone plays a cleric that isn't me since I'm playing one in another group...but with undead-heavy campaign we probably should have one? It would be harder without one.

Yes, I know, play what you want and all that but still...a cleric...

MetaVoid said:
I will go with dwarven fighter...I would prefer if someone plays a cleric that isn't me since I'm playing one in another group...but with undead-heavy campaign we probably should have one? It would be harder without one.

Yes, I know, play what you want and all that but still...a cleric...
Click to expand...

Where is the challenge in having a cleric in undead campaign?
Yes, I agree...at first level it might be irrelevant, but variuos drain effects can be devastating later...

I'll check what's on offer, I played a cleric in earlier editions - I created one for 5e (Storm one like Vairar ) - but it didn't work out.

Hmmm...how about...dwarf monk and dwarf fighter (or dwarf cleric/dwarf fighter) as two clan-mates (or even brothers) - bonus points if the fighter is the watchman and the other one is the mob

Well, conceptually I could change my sorcerer into a trickery cleric rather easily. But possibly that giving-someone-advantage-on-stealth may be going to waste, and I wasn't planning on my character to wear any armour...

Dread Metrol, The Mourning After (RG)