Instinctively, Ethian opens the door. "Someone may need help!" he says, as he rushes in.

Kaliban curses and follows Ethian into the manor. He draws his blade as he goes prepared for any possible dangers.

Ruznami smiled as he brushed the necklace clean with his fingers. He pulled out his flask for a bit of water to help clean it. “Found the necklace,” he told the others. “I’ll check out the cemetery now.”

He headed up the road as the others headed for the house, until the blood-curdling scream split the air. Ruz jumped, looking around with surprise, then back to the others, who were heading into the house where the scream had come. Ruz hurried back to the rear of the party, drawing his wand and warhammer.

After the shock of hearing a blood curdling scream, Argenti gathers her wits as if someone handed them back to her.

"People, here?" The woman questions, as she readies herself to enter the house. "Shedrick, come with us, it might not be safe out here, or in there for that matter. Be on guard!"
Last edited: Nov 18, 2021

Supporter
The scream that echoed from the confines of the building startled Hawthorne for just a moment (due to surprise if nothing else)... but the rational part of his brain then snapped back into place and of his two initial impressions for building occupants, one of them made the more sense for randomly screaming. "Whelp... sounds like a Figment it is then!"

But before he could do anything else... the high elf Ethian threw the door open and rushed inside to "aid" whatever they were to find, and the snirfneblin quickly followed. "Wait-- I don't-- you might not--" Hawthorne attempted to communicate... but then sighed heavily and dropped his head as the two of them rushed headlong into the manor. "All right then."

Argenti quickly gathered up Shedrick to escort him inside, and Hawthorne glanced back up to see where the rest of their party had gotten to. He waved at Crock Jon to join the others, then he saw the dwarf across the way heading towards the cemetery. "Ruznami! Abort! Change of plans! Come on back! Quickly! Party inside the manor house!" He waited for the wizard to rejoin them, and as they all entered the manor house one by one, Hawthorne withdrew his crossbow, cocked and loaded it, and then was the last to enter, closing the door behind them all.

Supporter
Crock Jon is picking his teeth when Hawthorne shouts, trying to remove a strand from some wild celery he had eaten on the hike that was now caught behind a tusk. He grabs the packs he can and takes them to the door, figuring it will only slow him down a few seconds, but concerned if he were to be responsible for losing everyone's equipment. His uncle would be disappointed in him if he let them down he knew.

By the time Ruznami had reached the back of the pack, Ethian was in the house and heading for a stairway that led to the second floor. Dust covered everything in the grand entryway. Moth-eaten cloaks hung from hooks on the left-hand wall. To both sides, hallways branched off into the gloom and beneath the stairs stood a door, leading to the back yard.

The others crossed a once magnificent rug, now dust-covered, moth-eaten, and molding, seaching left and right for signs of danger. For the moment, the house stood silent, but for the light creaking of the stairs as the elf began to ascend. 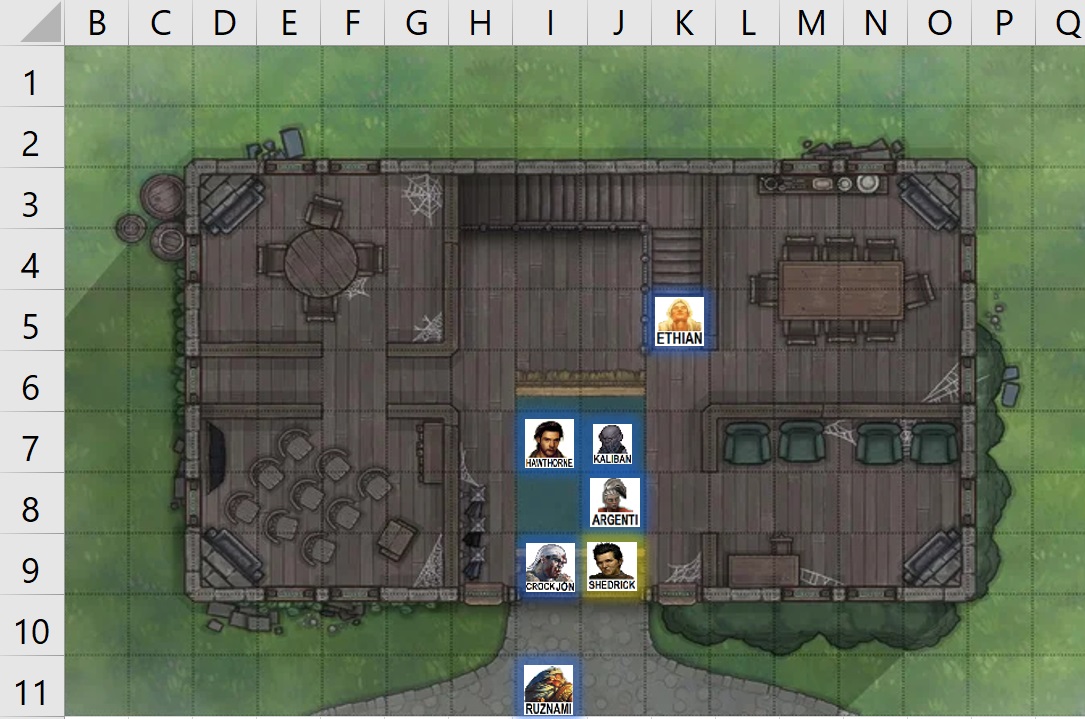 Ethian proceeds up the stairs, weapon drawn, ready to help

Ruznami came up behind the others. Crock Jon and Shedrick filled in the doorway, so the short dwarf tried to see around them, his warhammer and wand ready for trouble.

“Ethian! Perhaps let Archimedes go first?” Ruznami suggested, though anyone here probably knew more about this than he did.

Ethian stops at the beginning of the stairs. The mage was right, he was acting hastily, and had let his emotions take control. He looks at the master dwarf and signals for the Owl to go.

The scream had sounded like a woman in peril, but there was a strange, almost metallic echo underlying the voice. Ethian waited for the owl familiar to pass over his head, and then continued up the stairs. Archemedes flew, as directed, toward the room in the south-west corner, but when he arrived at the upper landing, the door was shut. As were the doors to three other rooms. However, a wide archway led to a library to the south (over the entryway downstairs, where the others were gathered).

Archemedes began a fly-around scout. As he flew under the archway, he reported by telepathic link to Ruznami, a strange humanoid figure crouched in the shadows next to a bookcase. It was wearing tatters that appeared to have once been fine clothes. Before Archemedes could make out any features, the shadows pulled tight around the creature and it was suddenly behind the owl. Archemedes tried to beat his little wings to get away, but it reached out with some sort of claw-like appendage and Ruznami felt a sudden pain, and then nothing. Archemedes was gone; crushed in a vice-grip.

This had all happened so fast that Ethian had only just reached the top of the stairs. The elf saw the creature through the shadows of the library as it crossed the floor, moving out of sight. As it did, it turned once toward him, and its human-like head held large round bug-like multi-faceted eyes. A wave of sorrow and regret washed over Ethian, but it wasn't the elf's own emotions - it came from the creature.

As he sees the creature, Ethian utters a small prayer Sehanine, please help me make the right decision

Upon sensing the creature’s pain and sorrow, a wave of empathy overwhelms him: “I…I am sorry to intrude, we heard a scream, and thought someone needed help. We meant no harm.”

Supporter
"Harm? What harm? Is someone being harmed, Ethian? What's going on? Kaliban, could you move up the stairs a little faster please? We have a screaming helper causing harm that we need to address!"

Hawthorne stands several stairs down from the landing of the second floor with the gnome and the elf in front of him blocking the way. He turns back to the people behind him on the stairs and raises his hand, "Harm incoming! Ethian's intruding on a harm thought and he's sorry for it! Needs help with nothing meant screaming! I think. It's very confusing. Not sure I got it all, Ethian was turned away from me while talking to someone else up here."

Kaliban nods to Hawthorne and follows Ethian up to the second floor. He makes sure to hold the weapon down in a non threatening manner.

Argenti is particularly confused by Hawthorn's outburst. "Shedrick, what does that phrase mean?" Waiting for his answer, she stays near the back of the party with him.

“Something is up there!” Ruznami warned the others, then he winced. “Gah! It killed Archimedes!” he exclaimed, angrily gripping his hammer as he followed the others up the stairs. He muttered magical words and made a sigil in the air with his hand, starting a field of energy shimmering around him to protect him from weapons.

By the time everyone was on the stairs, the strange figure had backed away from Ethian, who stood with his hands out. As Ruznami and Hawthorne reached the top of the stairs, they saw it briefly before it twisted into the shadows, causing the very darkness to fold around it, and suddenly it was gone.

Ruznami blinked as the strange figure disappeared literally into the shadows. “Anyone know what that was?” the dwarf asked, tugging nervously at his white beard as he tried to wrack his brain for anything from all the books he had read that might match something like that.

Supporter
"No idea. Are you alright, sir?" asks Crock Jon standing behind Ruznami. He looks around to see if he can help anyone.

Still shaken by the emotions he felt, Ethian says half to his myself, half to the others: “I’m not sure what it was, but it could have attacked me and it didn’t. I also felt it’s sorrow and regret wash over me…” he whispers to himself Lady Sehanine, help me discern what the creature was