how would a aasimar look in real life?

The 3e aasimar was simply described as "This being looks like a beautiful human, with calm, serene features and an inner radiance that shines from its face." I don't have the books for Planescape or 5e, but near as I can tell this is still roughly true of the race. Although 5e aasimiar tend to have tattoos or scarification of angelic symbols and, of course, the special form which adds a lot of overtly angelic features.

4e didn't have aasimar per se, they had Deva which are similar but not the same thing.

So basically a pretty human, except when using granted racial powers. 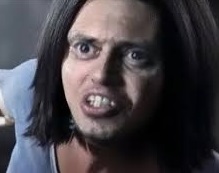 Aasimar could not exist in real life as per biology.