D&D 5E Arkadia vs Theros: Sell me on or off

(caveat emptor! This is all impressions from read-throughs, not play experience, so take all this with a huge grain of salt...)

Arkadia is pretty light-weight. It's more of a "how to skin D&D in a Greek style" rather than a full-fledged setting or campaign. Its gods map fairly neatly into the regular Greek pantheon, and its few major cities reflect our stereotypical ancient Greece in a fairly straightforward way. The player options build on standard D&D characters; equipment lists are adjusted to reflect bronze age; and there's some new magic and monsters intended to emulate mythic Greece. It doesn't provide much in the way of new mechanics or anything. It also doesn't offer big plot line or anything, so the DM is on their own to build an actual campaign.

Theros is a much beefier book and a more complete setting derived from the Magic card game. It's definitely it's own thing: certainly influenced by Greek myth, but it's not actual mythic Greece. The pantheon and cultures are only loosely based on our "real" myths. It's got fewer new options for PCs, iirc, but also offers some new mechanics for the sort of heroic play the setting focuses on (namely things like omens and Piety). It also present quite a few hooks, small maps, and so forth to aid the DM in running a campaign. Like Arkadia, though, there isn't really any single over-arching story presented.

FWIW, there is a third setting called Odyssey of the Dragonlords. I haven't fully digested this one yet, but i'd say it's comparable to Theros in its "accuracy:" heavily inspired, but definitely its own thing. It's got it's own history and pantheon, and (spoiler!) dragons. The book does offer quite a few new player options, monsters, and so forth, as well as some new concepts like Fame and Epic Paths. Importantly, this one is an actual campaign to high-levels, played out in several Acts and modeled on the trope of "epic great labors."

None of these settings, iirc, mentions common mythic Greek tropes like "the loyal friend;" commanding crews or armies; or nautical rules; etc. The concepts of "fate" and "destiny" are addressed in Theros and Dragonlords, though not especially deeply or innovatively, imo.

Supporter
There's also this, due out in September: 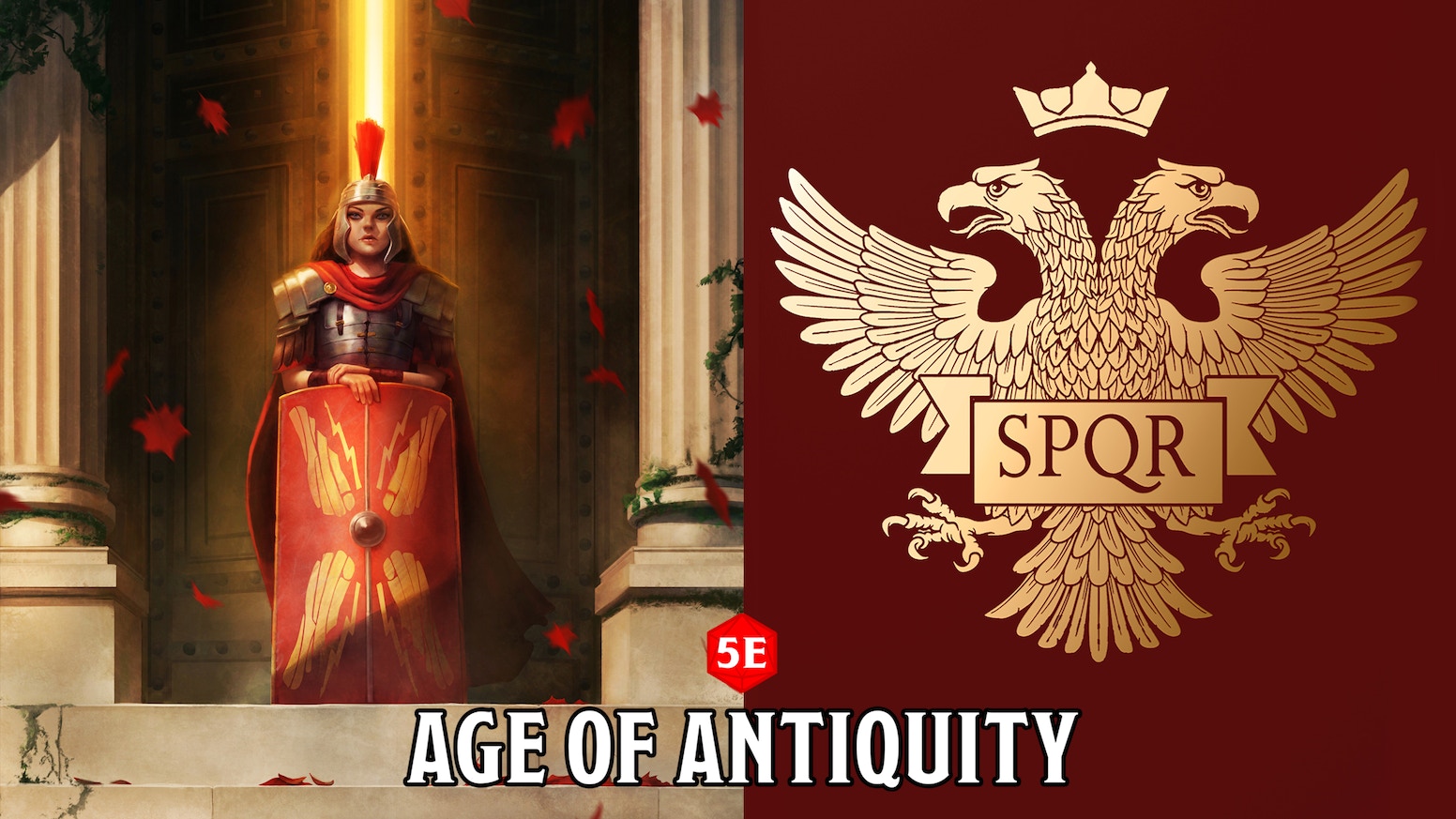 Age of Antiquity: An Ancient World Setting for 5E.

I thought Norse-inspired settings were? I remember seeing like 5 of them for 5e, for example.

I have Theros and as a classicist it just rubs me the wrong way.

If you want a milieu based on mythical Greece then I urge you to find a copy of Hero Games Mythic Greece and adapt it for 5E.

I run a Theros campaign myself and it feels suitably epic with the way the gods play in the setting and how the Nyx and Underworld interact with the setting. The next adventure is a seafaring and undersea adventure inspired by Atlantis lore and the city of the Tritons and the sea god Thassa.

I suppose it's a bit of an 'uncanny valley' effect.

Quartz said:
I suppose it's a bit of an 'uncanny valley' effect.
Click to expand...

I think so, as a fellow classicist, as Theros also rubs me the wrong way, despite liking a lot of individual bits of it. It's just sort of too-similar and too-distant at the same time. Discordant.

Odyssey of the Dragonlords is the one that works best for me - it's Greek "enough" but not extreme. It also has some really interestingly designed subclass options which push the mythic Greece vibe pretty well (unlike Theros), one for each class too.

Thank you everyone for the replies so far.

Ruin Explorer said:
I think so, as a fellow classicist, as Theros also rubs me the wrong way, despite liking a lot of individual bits of it. It's just sort of too-similar and too-distant at the same time. Discordant.

Odyssey of the Dragonlords is the one that works best for me - it's Greek "enough" but not extreme. It also has some really interestingly designed subclass options which push the mythic Greece vibe pretty well (unlike Theros), one for each class too.

Ruin Explorer, what do you mean by, "but not extreme"?

If you know enough Greek lore to care about what is accurate/authentic, then you don't need a setting. All the mythic monsters are in the core rules. As for weapons and armor, reskinning those is easy.

Dragonlords is a hybrid of Game of Thrones and Greek myth. While elements have a very Greek myth feel to me, others are absolutely not Greek. It feels to me like someone put their Krynn Dragonlance Chocolate in my Greek Mythos Peanut Butter. It works, but you would not make a PB&J with it.