What we do is cook the whole turkey and then plan out what to do with the remnants. This section gets chopped up and frozen with the plan of making a turkey quiche in a few weeks, bones get into the pressure cooker for stock, these are leftovers ... etc.

It helps (and hurts), that I'm a turkey addict, I cannot go cold turkey, as I will eat it all, so leftovers don't last as long as they probably ought to.

Staff member
Cold cuts aside, I was 50/50 on turkey...until I came up with my own method. The year after perfecting my steaming process, I did 10 in 12 months.

(Not just for us, we were sharing.)

Staff member
Are we all having fun yet? YES!

In order to kill multiple avians with an arbitrary amount of mineral, I decided to take a large frozen turkey from my maternal aunt’s freezer and cook it, replacing it with two smaller turkeys for future meals while they were 65¢/lb.

Since neither my nor my aunt’s refrigerators have much space in them due to isolation prepping, I knew I’d be thawing that bird in the sink immediately, and cooking it.

What I had forgotten to account for is that the sink thawing method involves draining and replacing the water every 30min and that it takes 30min/lb to fully thaw the bird.

I want to make another try at choux pastry, the last time I tried it was a horrble failure. The problem is that ... do those pastries freeze well? Because I don't want to eat an entire batch of eclairs. Or ... I do, but I won't. Yes, these are random quarantine thoughts.

Been drinking dated coffee and eating out of date cereal I found in the cupboard. Best before was November.

Had some over ripe bananas. 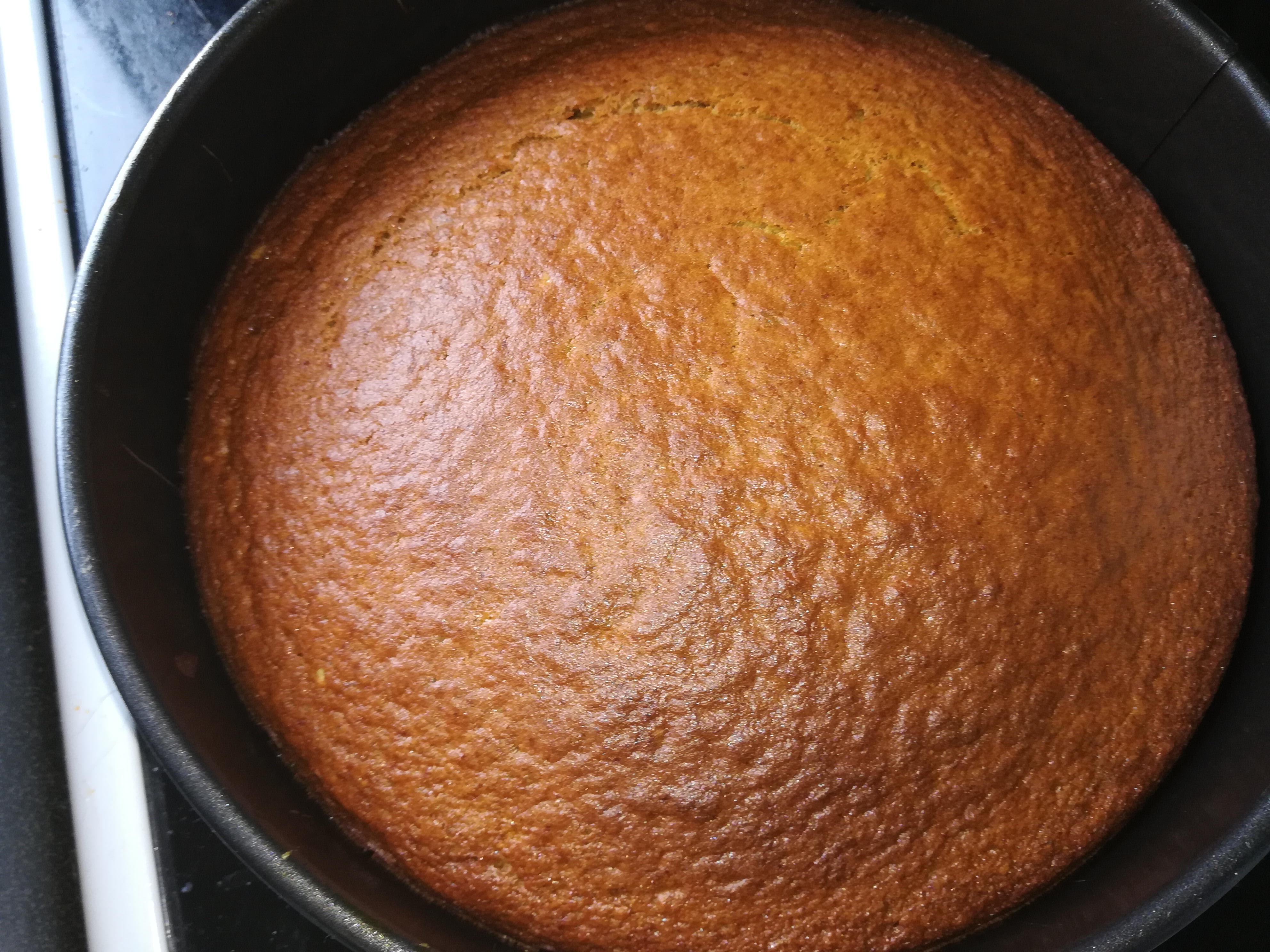 Sterilized them in the oven at 180c for 40 minutes.

Staff member
This is an oven-steamed turkey & veg I did last night to split between my two aunts’ houses. 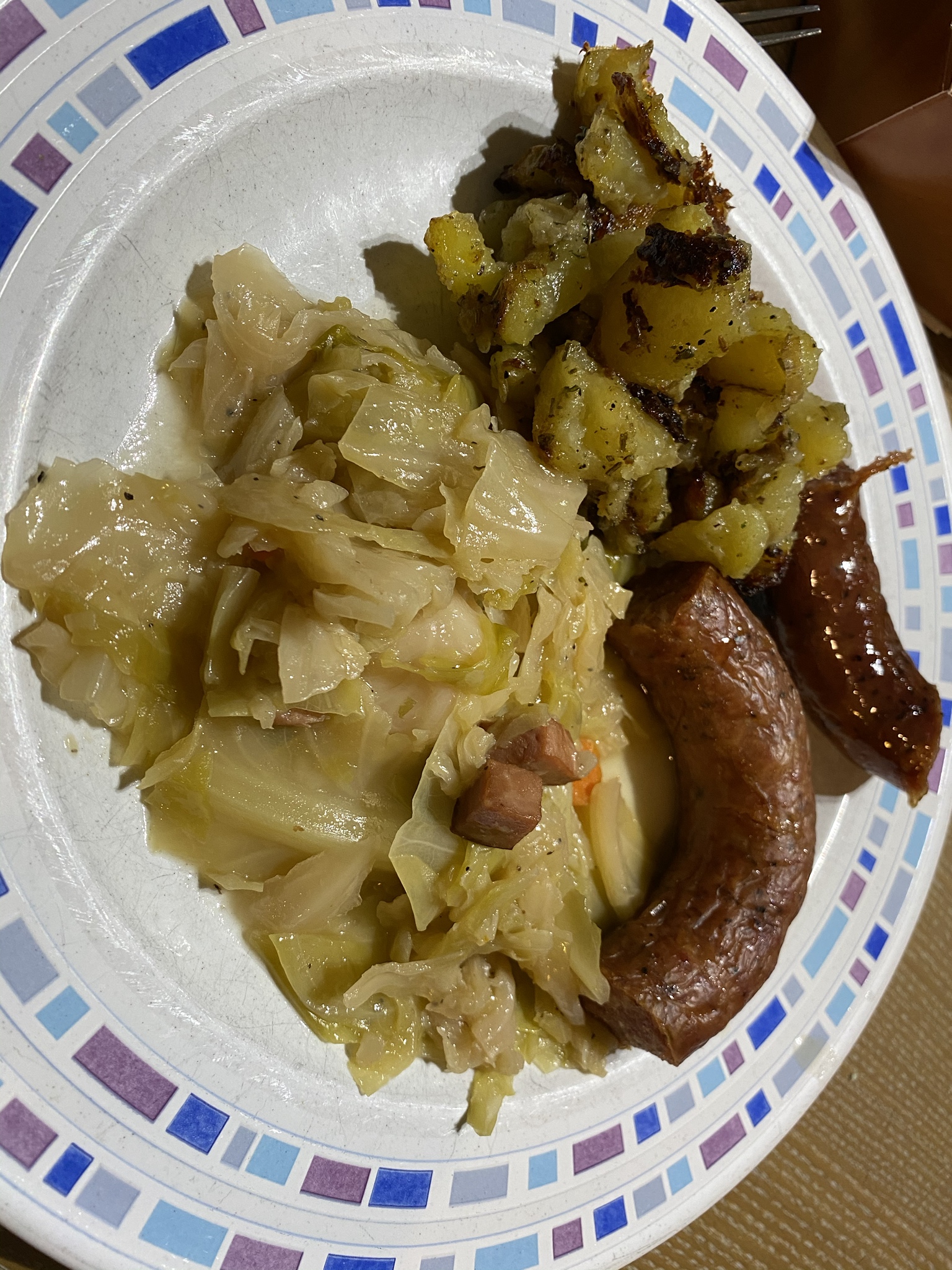 I made a discovery tonight! We have a rosemary bush and it's currently in bloom. I used the blossoms to top some black beans cooked with roasted garlic and lime. Delicious! If you have the opportunity to use rosemary blossoms, I really recommend it.

You've seen those videos of people using the water from a can of garbanzo beans to make meringue, right? Well I got bored, and I was making some hummus and thought, oh what the hell. I saved the bean-juice and poured it into my standing mixer.

I whipped everything together on the highest speed for ten or fifteen minutes, adding the sugar slowly a spoonful at a time: 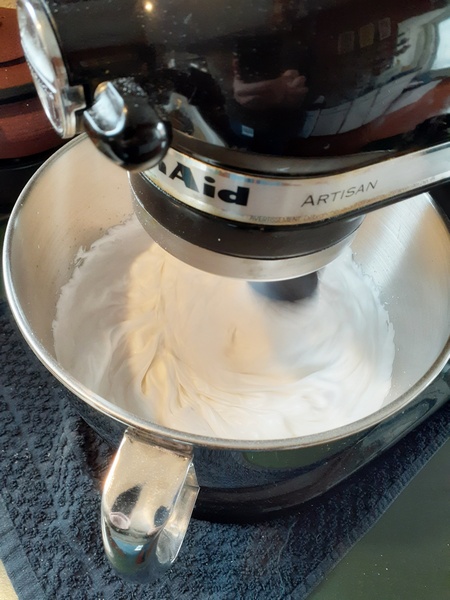 And holy carp, it worked! It made stiffer, more stable peaks than egg whites do: 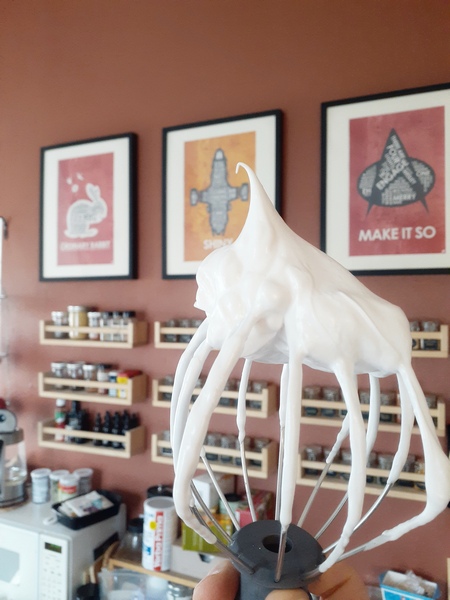 So I figured I'd go with some macarons. I put the meringue into a pastry bag and piped them out onto a sheet of parchment paper. I made cups out of some, disks out of others, and ladyfingers out of still more. It made dozens of cookies, people. DOZENS.

Then I baked them in my oven's lowest setting (I think it was 200 degrees F) for 45 minutes. Then I turned the oven off and let them cool in the oven for another hour and a half or so, until they were completely dry and crisp: 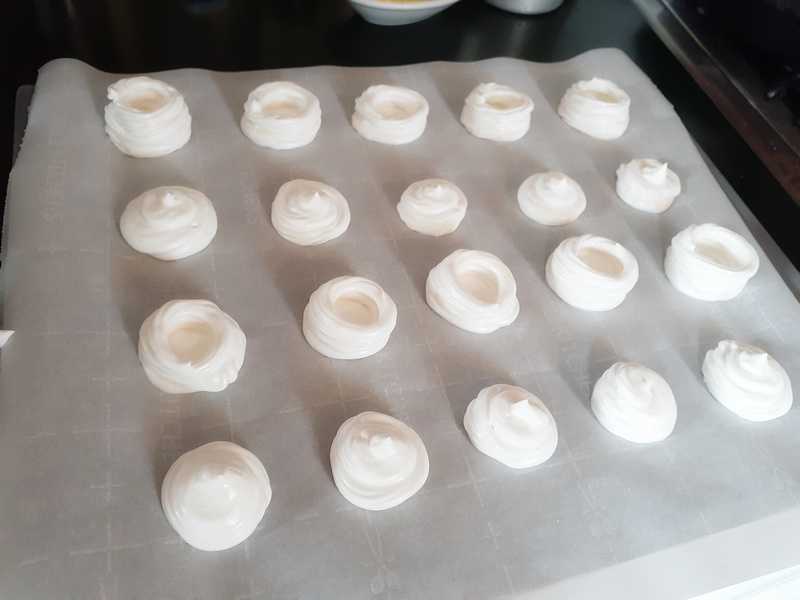 While they were drying, I made some fillings. For the cup-shaped cookies, I just phoned it in and filled them with some strawberry jam. For the disks, I made a dough out of 1 part maple syrup and 3 parts chunky peanut butter, and sandwiched it between two of the little "macarons" I had made. And for the ladyfingers, I got all kinds of fancy: I made a paste out of 1 part honey and 1 part tahini, spread it in a thin layer across the top of the ladyfingers, and then pressed the cookie into a bowl of toasted sesame seeds: 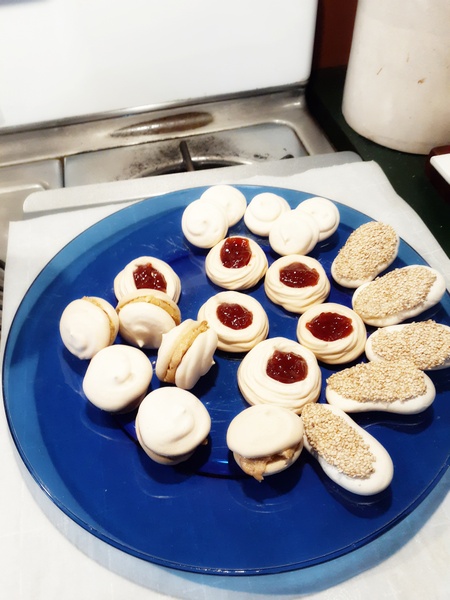 I'm not going to say they were "just as good" as the same cookies would have been if they were made from egg. But the flavor is pretty danged close, and the texture is a little crispier.

Next time, I'm going to skip the vanilla and almond extracts, and use peppermint instead.
Last edited: Mar 26, 2020

@CleverNickName My wife has used that fluid as a binder for granola. Apparently there are many uses for it.

I made this Ginger Sweet Potato and Coconut Milk Stew with Lentils & Kale last night - absolutely fantastic. 100% vegan and gluten free, too, for those who care. I actually used beef broth as I didn't have vegetable broth, so maybe that added a bit of flavor.

Mercurius said:
I made this Ginger Sweet Potato and Coconut Milk Stew with Lentils & Kale last night - absolutely fantastic. 100% vegan and gluten free, too, for those who care. I actually used beef broth as I didn't have vegetable broth, so maybe that added a bit of flavor.
Click to expand...

Sooo...not QUITE vegan as made.

Staff member
I was going to use that as a guide to doing stir-fry tonight, but I dozed off reading emails and didn’t wake until 6:45. Not enough time to do my prep and get dinner tabled at a reasonable time. Tomorrow, then.

I was looking to it more for technique than recipe- though that doesn’t hurt either- because it’s AGES since I did a stir-fry. And my technique was always lacking, IMHO. Always room for improvement, y’know?

And like I said, the recipe was a bonus. I was surprised to see the egg in the meat prep.

Dannyalcatraz said:
Sooo...not QUITE vegan as made.
Click to expand...

True, true. But the recipe is, and I imagine it would be 99% as good with vegetable broth.

Having recently been officially diagnosed as allergic to wheat, dairy, and eggs, I am super stoked to find that out about garbanzo bean liquid. Totally gonna try that. I have been using ground flax as an egg substitute, which actually works quite well.

One thing I’ve noticed is that since I can’t eat wheat, dairy, or eggs, that pretty much eliminates all fast food and most processed food. Everything is homemade now, and more veggies. In the past month, I’ve lost 10lbs without doing anything else. Sugar and processed food intake down a lot. My meals are more paleo now, with the occasional treat like the above baked goods.

Staff member
My food allergies don’t usually interfere with my cooking or dining choices in any major way. But I do have to be aware of dietary issues of others because I cook big meals for varied crowds. Between religious, health and taste/texture concerns, menu planning and ingredient substitutes are always on my mind.

So I know, for instance, that rice pastas make for decent wheat pasta substitutes on occasion. And almost anything I can eat on bread or pasta can be served in/on potatoes,

Dairy, OTOH? I got nothing. I mean, veggie “milks” exist, and some are fine as beverages, but I have not a clue as to which can be used in cooking,..or how.

Last week there was only the cheap and nasty spaghetti left on the shelf. So I decided to test the in case of emergency supply. 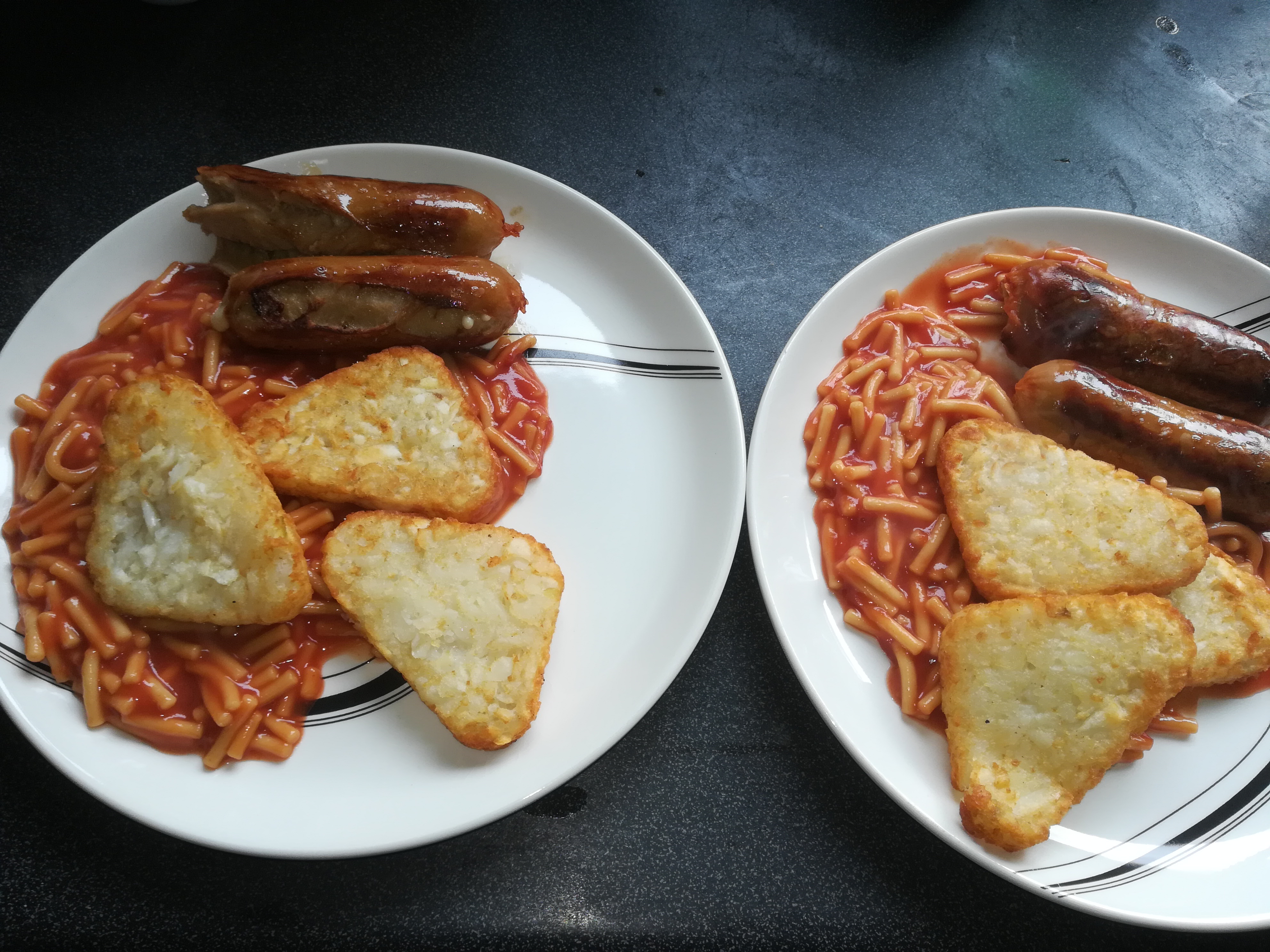 Then broke out the bread maker and made some bread. Used some milk powder then made up some fake milk and turned it into a hot chocolate test.

Been drinking dated coffee and eating cereal I found in the back of the cupboard dated November 2019.

Figured may as well test what I'm willing to eat now.

Our younger dog has been recovering from a serious illness, and was put on a low-fat meat and rice diet. Couldn’t find chicken, so got turkey (Vet OK’ed), but there was ZERO rice in the stores. Except...

Besides a few boxes of boil in bag, we had one out of date 10lb bag of standard white rice in the pantry. I cooked some up, and tasted it. It was fine, thankfully.

Bottom line: our grrrls haven’t been complaining, and I’m getting much needed practice in cooking rice on the stovetop.

Some stuff lasts for years out of date. Honey,suger, rice. As long as it's dry.