TSR Periodicals published The Dragon issue 36 in April 1980. It is 72 pages long and has a cover price of $2.50. In this issue, we have a draconic sub-race, mature content in D&D, and statistics for Conan! 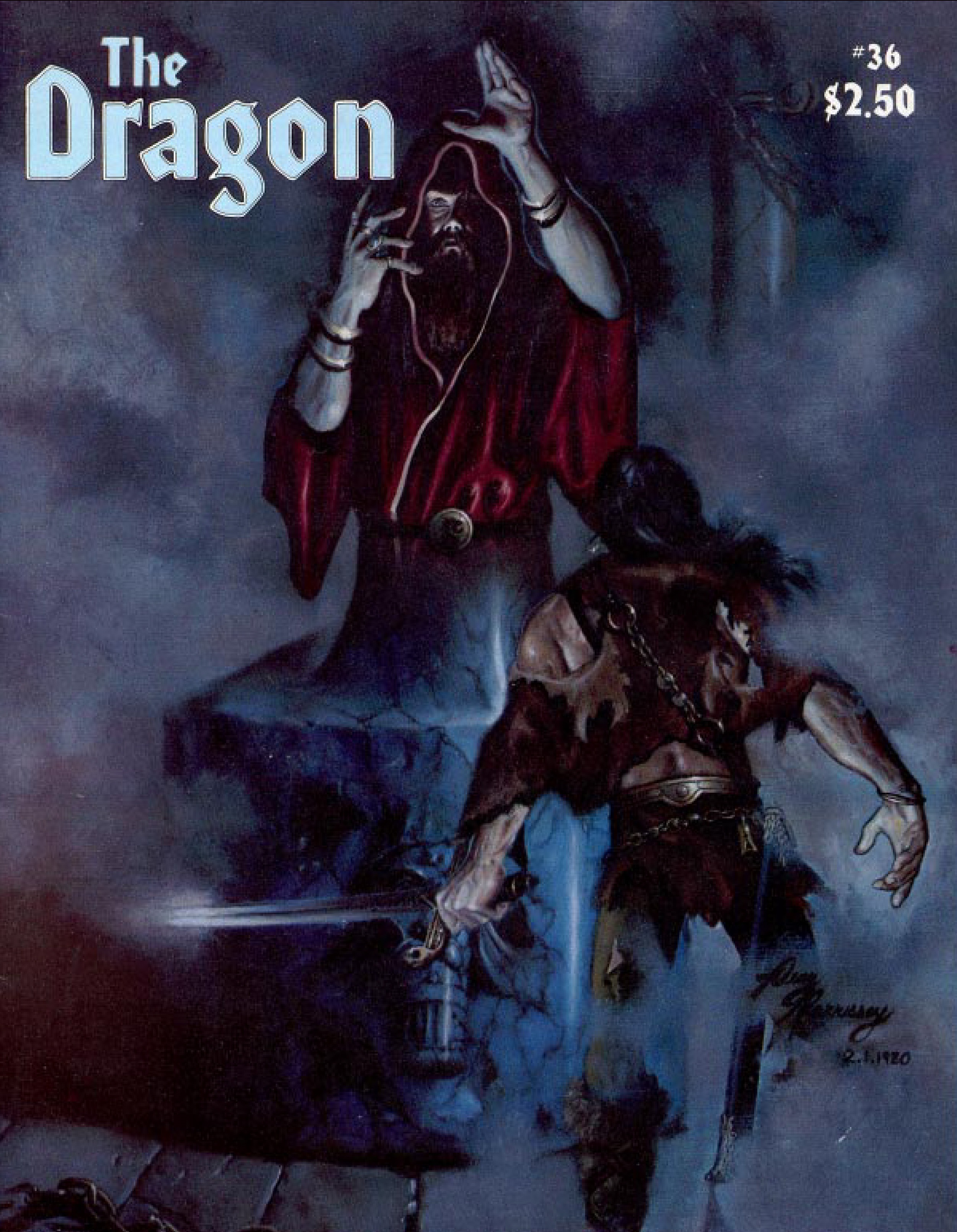 ​
The magazine does not explicitly mention it, but this is Tim Kask's last issue with TSR Periodicals. The credits page makes no mention of Kask, though it does include an editorial by him (on the problems caused by age disparity in D&D games). The only real clue comes from this uncredited note at the top of the letters page:

"Enough is enough! Today we clean out the bank account ("used bills in small denominations, please"), sell the company car to Cousin Sid, make arrangements for the Midnight Office Supply Co. to liquidate our typewriters and desks, and buy our tickets to the Bahamas. Good-by, office; hello, beach! It's been real..."
Click to expand...

A small tribute is in order. Tim Kask was a military veteran who became involved with wargaming and D&D while studying communications at college. He became friends with Gary Gygax, who invited him to join TSR in 1975 as an editor. Kask was the first full-time employee of the company. He moved from general editing duties to launching The Dragon in 1976. As this column has shown, the first issues were crude, but by 1980 Kask was publishing a highly professional magazine.

As regards his reasons for leaving, there are hints that he was unhappy with his compensation. Following his resignation, he published his own magazine, Adventure Gaming, which lasted just 13 issues before folding. This failure had devastating financial consequences for Kask, and he left the gaming hobby altogether for many years. Considering the influence of Dragon magazine, Kask's contribution to gaming was immense.

On to this month's features. "The Cube from Beyond" is another story by Gardner F. Fox featuring his Conan-clone, Niall of the Far Travels. In "Up on a Soapbox," Larry DiTillio (celebrated author of Masks of Nyarlathotep and co-creator of Babylon 5) discusses the inclusion of sex, drug use, and other mature content in D&D games. In "Leomund's Tiny Hut," Len Lakofka gives some guidelines for creating powerful and believable deities.

"Simulation Corner" suggests that the wargame market is now favoring microgames instead of the "monster games" that have prevailed to date. "The Electric Eye" by Mark Herro continues its introductory series on personal computers, while "The DM's Right-Hand Man" by Roy Earle demonstrates how you can use computers to automate gaming tasks.

"Minarian Legends" is back with more lore about the Divine Right wargame by creator Glenn A. Rahman, while Dan Campagna gives a detailed description of his new wargame, Samurai, published by Avalon Hill.

In "Dragon's Bestiary," Todd Lockwood (who later became a staff artist for TSR) presents the Krolli, a warm-blooded flying reptile who may be the first draconic sub-race. "Giants in the Earth" gives us statistics for Farael Sabatini's Captain Blood, H.P. Lovecraft's Richard Pickman, and Thomas Burnett Swann's Silverbells. Following a public chiding by Gygax, Schick and Moldvay appear to be giving these literary creatures more modest statistics.

Gygax himself presents statistics for Conan in "From the Sorcerer's Scroll." Intriguingly, he gives the stats at different stages of life. For example, Conan's Strength peaks at 19 when he is 30 years old, while his Charisma peaks at 18 when he is 40 years old. Gygax presents Conan as a Fighter/Thief and has these levels increase until the barbarian is middle-aged and then taper off. The Dungeon Master's Guide makes no provision for class levels to reduce with age, so this is an intriguing little innovation.

Jean Wells continues to offer up "Sage Advice" to players everywhere. The questions are occasionally grim and unsettling:

"Question: Can a Paladin put someone to death if the victim is severely scarred and doesn't want to live?
Answer: Absolutely not! The Paladin would try to find a reason for the person to live, if not with the world, then shut away doing religious work where those who benefit from the aid would not care what he looks like. The Paladin would also do all that he could to see that the character did not succeed in taking his own life."
Click to expand...

As always, this issue features a collection of variant rules. Steve Jackson presents a two-player option for his immensely popular Stellar Conquest game, while Bryan Bullinger shares an urban combat scenario for Squad Leader. F.C. MacKnight is back with some rule changes to the Lankhmar wargame to correct the overly simplistic Combat Tables and other short-comings

Bill Fawcett, co-owner of Mayfair Games, describes a complicated Experience Point variant for D&D, which relies on each player's actual damage inflicted. Meanwhile, Hammack, Blume, Gygax, and Kask present "The Fastest Guns That Never Lived," giving us Boot Hill statistics for gunfighters out of the movies and TV. For the record, Clint Eastwood is considered the best shot, followed by the Lone Ranger!

There is a lengthy historical article on the Mongols by Michael Kluever, discussing their weapons and tactics. These sorts of articles were fairly common soon after TSR merged Little Wars with The Dragon, but they have been pretty rare recently.

There are just three reviews featured in this issue. Starship Troopers by Avalon Hill is "an excellent buy." Mech War 2 by SPI is the "best available" game for those interested in modern tactical ground warfare and "a must" for wargamers. Meanwhile, Trek 80 by Judges Guild "is a well written program and a good Star Trek game."

And that's a wrap. There were no real standout articles, but a lot of solid content. Next issue, we have an article on planar travel by Ed Greenwood, new treasures in Bazaar of the Bizarre, and a sneak peek at the upcoming World of Greyhawk!

M.T. Black is a freelance game designer. Go to his website for a free, five-star adventure!
J

I have been waiting for this one! I learned D&D when my oldest sister bought the blue box basic set, I was probably nine. I taught my fifth grade class to play, and was a big fan, but this magazine was eye opening. I found it a few years later in my first trip to an actual hobby shop. It never occurred that “grown ups” would play, and the people in that store along with this content pointed to something much more then I was seeing. I rebought it a few years back and was amazed to find that I actually remembered a good deal of it, down to at least one article title. Thanks for reviewing.

Have you been doing all of these? Is there an index? This makes me want to dig back into my extensive collection of Dragons (though my collection starts in the issues numbered in the late 60s and is spotty until somewhere around #110).

el-remmen said:
Have you been doing all of these? Is there an index? This makes me want to dig back into my extensive collection of Dragons (though my collection starts in the issues numbered in the late 60s and is spotty until somewhere around #110).
Click to expand...

Neat! Todd Lockwood would've been all of 22 or 23 years old back then.


M.T. Black said:
In "Dragon's Bestiary," Todd Lockwood (who later became a staff artist for TSR) presents the Krolli, a warm-blooded flying reptile who may be the first draconic sub-race.
Click to expand...

Supporter
These old magazines make me what to go out and grab all these old titles. Mech War 2? Yes please.

I remember this issue for a reason It spawned my negative experience point system for PCs / NPCs who had quit their profession. NPC classes were common in AD&D and Dragon Mag. I did the typical thing and figured they gained experience practicing their profession at a slow level if they didn't adventure. 1 xp times their level per day, 25 days of work in a month, 300 xp a year at first level. Which back in the day meant over 6 years for a fighter to go from level 1 to level 2 (2,000 xp). They might make 5th or 6th level before they aged out / retired. What happened then? Did they just stay 6th level? Not if Conan went down in level! So, I decided if you retired or quit practicing your profession / class you lost experience at that same slow non adventuring rate. You slowly lost levels. One of my players left the game for a year going overseas (about 3 years of game time). He decided his PC who had quit and bought the players favorite tavern should retire from adventuring He came back, and reasoned his PC decided the quiet life had soured on him and he "went back to work" as an adventurer. Minus some experience. At which point I had a system that worked on both NPCs and PCs. And it was a system, not just an ad hoc decision. sigh It was beautiful

How did your players respond to negative experience points? Sounds like they were sorta ok with it

M.T. Black said:
How did your players respond to negative experience points? Sounds like they were sorta ok with it
Click to expand...

He was all right with it. I explained how / why I applied it. His PC was "rusty" and needed to get back into it. He could have left his PC in the hands of the group, but he wanted him sidelined instead. Actually, thinking about that group I kind of understand the decision

R_Chance said:
He was all right with it. I explained how / why I applied it. His PC was "rusty" and needed to get back into it. He could have left his PC in the hands of the group, but he wanted him sidelined instead. Actually, thinking about that group I kind of understand the decision
Click to expand...

Given what would often happen with characters left in the game but not being run by the original player for five minutes, it's very understandable to sideline the character!