Dragon Publishing released Dragon issue 46 in February 1981. It is 80 pages long and has a cover price of $3.00. In this issue, we have an all-new D&D adventure, fiction from J. Eric Holmes, and the first reviews for World of Greyhawk! 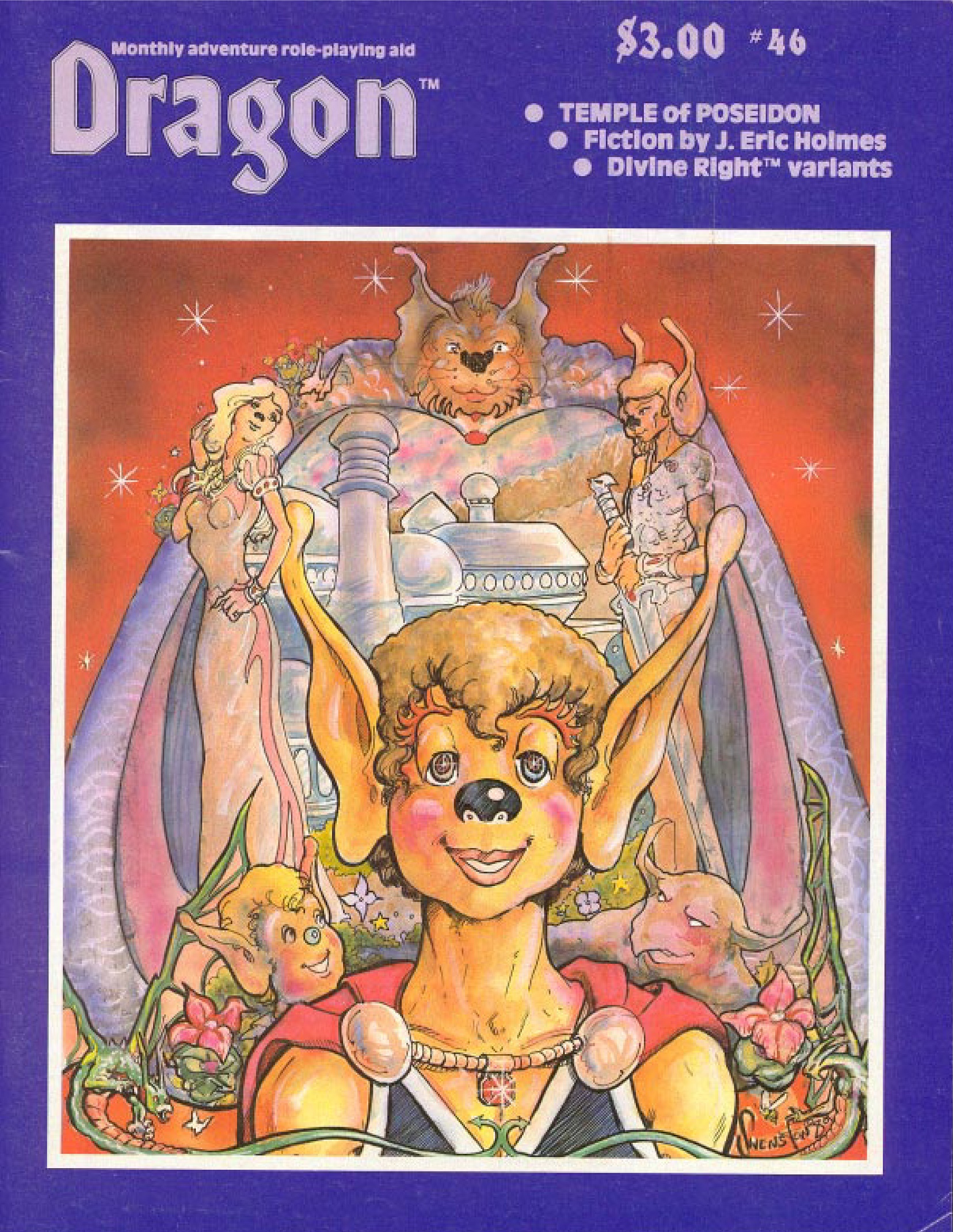 Editor Jake Jaquet notes that they are giving Dragon magazine a "facelift" over the coming issues, starting with the switch to a three-column format. Jaquet also notes the formation of the TSR Role-Playing Game Association (RPGA). The initial goal of this organization was to provide a way for role players to network, but within a few years, the RPGA was strongly focused on organized play. It existed until 2014 when the Adventurers League replaced it.

This month's special feature is "The Temple of Poseidon," a D&D adventure by Paul Reiche III. Reiche, a childhood friend of Erol Otus, was a developer at TSR, and "The Temple of Poseidon" was his job application. The adventure is a good mix of combat, traps, and puzzles. Reiche was with TSR for only a short period before moving into computer games, where he has worked on titles like Tony Hawke and Skylanders.

"The Sorcerer's Jewel" is a short story by J. Eric Holmes and the fifth in his "Boinger the Halfling" series. It is pretty typical D&D-inspired fiction, and the complete series did not find a publisher in his lifetime. Holmes was best known, of course, for writing the original D&D Basic Set.

"Crane is what you make of it" by game designer Richard A. Lloyd responds to several criticisms leveled at The Tribes of Crane play-by-mail game in a recent issue. "Mightier than the pen" by Kyle Gray discusses famous swords from traditional epics such as Beowulf. Gray wrote several other articles for Dragon, most with a historical bent.

"This here's Tyrannosaurus Tex" by Roger E. Moore is a Boot Hill scenario involving a tyrannosaurus rex. Good fun! "How to ease the Boot Hill identity crisis" by Paul Montgomery Crabaugh contains a well-considered occupation table for the game. Crabaugh published numerous articles for Dragon and other gaming magazines in the 80s.

On to the regular features! "Dragon's Bestiary" presents the Gaund, a typically well-described monster from Ed Greenwood. These three-eyed lizards were later published in the Forgotten Realms Appendix of the Monstrous Compendium.

"Giants in the Earth" provides D&D gaming statistics for characters from literature. This month, Tom Moldvay solicits reader submissions for future issues. "Sage Advice" has the usual collection of reader questions. This one caught my eye:

"Question: What would happen if you placed a full Bag of Holding into an empty Bag of Holding? I want to be able to carry as much treasure and magic as I can without encumbering myself. Do you think this is a good idea?"
Click to expand...


The official response is that the full Bag of Holding essentially fills the empty one. Doing this in the modern game destroys both bags and opens a gate to the astral plane!

In "Simulation Corner," John Prados summarises the year 1980 in the wargame field. He observes the following trends: a move from micro-games toward larger games, a renewed focus on the Civil War, and a slower release schedule. He also notes a rumor that Task Force Games and Phoenix Games are going out of business. This rumor proved to be false as regards the former company but true for the latter.

"Dragon's Augury" is a little larger than usual this month. Tony Watson reviews The Complete Book of Wargames from Simon and Schuster, which is "a fine introduction to wargaming for the novice, but of only marginal utility to the veteran." Bill Fawcett reviews three D&D-compatible adventures from Dimension Six. Mountain of Mystery has "a few inconsistencies" but "some very good ideas." Temple of Athena has "several outstanding traps and rooms... the adventure is worth the price just for those." Meanwhile, The Nine Doctrines of Darkness (great title!) is "less of an adventure than a detailed landscape" but "allows for some fascinating possibilities."

Finally, we have two reviews for The World of Greyhawk Fantasy Game Setting, as well as a formal response from TSR. This first edition consisted of a 32-page gazetteer and a 2-piece map in a cardboard folio. Jeff Seiken notes that this product has been "Often promised, but often delayed..." In a thorough review, he praises the maps effusively, describing them as "easily the highlight of the product." He is less enthusiastic about the gazetteer, noting that while it gives you "a pretty good understanding of the world depicted on the map," it has some "surprising omissions." For example, there is virtually no information on religion and famous personalities of the world. However, his most telling complaint comes in the final paragraph:

"There is a deeper problem with THE WORLD OF GREYHAWK... the sense of the fantastic... seems to be lacking. There are no thrilling revelations in the gazetteer or maps, nor is anything astounding disclosed. The world presented is very complete, logical and interesting, but the burden is on the DM to transform THE WORLD OF GREYHAWK into The Fantastic WORLD OF GREYHAWK."
Click to expand...


Kenneth W. Burke spends most of his review focusing on problems he has with the gazetteer (no roads on the map, no settlement symbols, the use of the word "savages," etc.). It's a little jarring to get to his conclusion and read, "On a scale of one to ten, THE WORLD OF GREYHAWK deserves a rating of nine."

Lawrence Schick, Vice President of Product Development at TSR, makes a brief response. Where things are lacking, he suggests, it's because "We wanted to give DMs a push in the right direction without doing everything for them." For example, he dubiously asserts that there was no point including religion as "this is an area that almost all DMs handle differently." His final comment seems more credible, "The World of Greyhawk had a long and painful gestation period, but it turned into a child we're all proud of."

And that's a wrap! The highlight articles for me were "The Temple of Poseidon" and the World of Greyhawk reviews. Next month, we have adventuring on the outer planes, the AD&D exam, and a complete RPG by David Cook!
Click to expand...

""The Sorcerer's Jewel" is a short story by J. Eric Holmes and the fifth in his "Boinger the Halfling" series. It is pretty typical D&D-inspired fiction, and the complete series did not find a publisher in his lifetime. "

I would point the reader to Tales of Peril: The Complete Boinger and Zereth Stories of John Eric Holmes by Black Blade Publishing. Over the span of months, me and my D&D group read the entire collection out-loud together, on nights we weren't up for playing TTRPGs. More than "typical", I say the stories are "archetypal." It was so interesting to see how one of the authors of BD&D interpreted and portrayed how the class and race traits work in a story. The stories are zany and fun. We laughed out loud many a time. I recommend the book. (And I'm not sure, but I believe they're all autographed and numbered too.)

This always really warms my heart I have to say. So many fond memories of Dragon magazine. Being old school, I've ALWAYS preferred hard copy over digital. Far easier on the eyes and certainly more easily accessible in my opinion. The magazine was simplistic back then but to me that never mattered. It was a nice source of news and information. I distinctly recall numerous times, when reading something in the magazine, it would spark an idea and get the creative juices flowing. Now when articles about the World of Greyhawk came out, I remember being beyond overjoyed. Since I was still a pre-teen at the time, the idea of an entire developed campaign world had never even occurred to me. I never ran adventures linked together. My friends and I would just create characters, do the dungeon crawl and call it a day. It was simple. It was a distraction and it was fun. What more could you ask for? When I started reading little bits here and there in Dragon about some world Gary Gygax had used, I simply knew I had to have it! To this day, it remains in a very special place in my memory and always will.

TSR took the criticisms to heart, of course, including everything mentioned in the above excerpt in the World of Greyhawk boxed set.

Mainly I remember not liking the cover art (or later in the issue) the comic it was hooked to. The issue itself was pretty good.

Whizbang Dustyboots said:
TSR took the criticisms to heart, of course, including everything mentioned in the above excerpt in the World of Greyhawk boxed set.
Click to expand...

I was too busy staring at the maps to criticize it

R_Chance said:
Mainly I remember not liking the cover art (or later in the issue) the comic it was hooked to. The issue itself was pretty good.
Click to expand...

Definitely not my favorite cover. Just not my style.

This month's cover was by Steve Swentson
Click to expand...

It was intended to promote a short-lived comic serial, as I recall.

I work in the video game industry and last year had the good fortune to see Paul Reiche give a presentation of his long, lucrative, and extraordinary career in gaming. He somehow managed to be both exceptionally creative and a gentle soul. An awesome guy, a great inspiration.

Temple of Poseidon is a good module, good enough IMO to have been released as a standalone product.

Hated the cover.
Loved the Temple of Poseidon adventure.

And thank you for this series of articles. They are beautifully nostalgic.

Just browsed it on my CD....I DO NOT recall this one even with doing that. Odd. Thanks again for these.

When I first subscribed to Dragon Magazine, this was the first issue I got in the mail.

Wow, this is right during the heyday of my Dragon Magazine collection, so this brings back some great memories. It's funny how just seeing the covers instantly brings me back to my junior high and high school days.

Why no mention of Pinsom?

Bolongo said:
Why no mention of Pinsom?
Click to expand...

Bolongo said:
Why no mention of Pinsom?
Click to expand...

I don't normally mention the comics. It's not that I don't enjoy them, it's just difficult to know what to say about them, especially the humorous ones.

Supporter
Is there anything Mr. Greenwood can't do? I actually didn't know he was a contributing artist. This cover is not my favorite. It's a little, i dunno, smurfy, which was in style at the time. I looked up The Nine Doctrine's of Darkness and was a little surprised to not see a PDF available somewhere for sale. I wonder if there is a little hole in the industry where third party books from this perioud cannot be found anywhere digitally. It is nice to know Mr. Holmes short fictions was collected, I will have to look into that.

Perusing the old Dragons......Greenwood's contribution to what is DnD cannot be over stated, imo. So much content. So much good to great content (with a few duds, but the ratio skews the positive way for sure).

D&D General What are some of the populations of D&D kingdoms and cities?