Dragon Publishing released Dragon issue 53 in September 1981. It is 84 pages long and has a cover price of $3.00. In this issue, we have the oracle class, more options for monks, and the International Dungeon Design Contest winner! 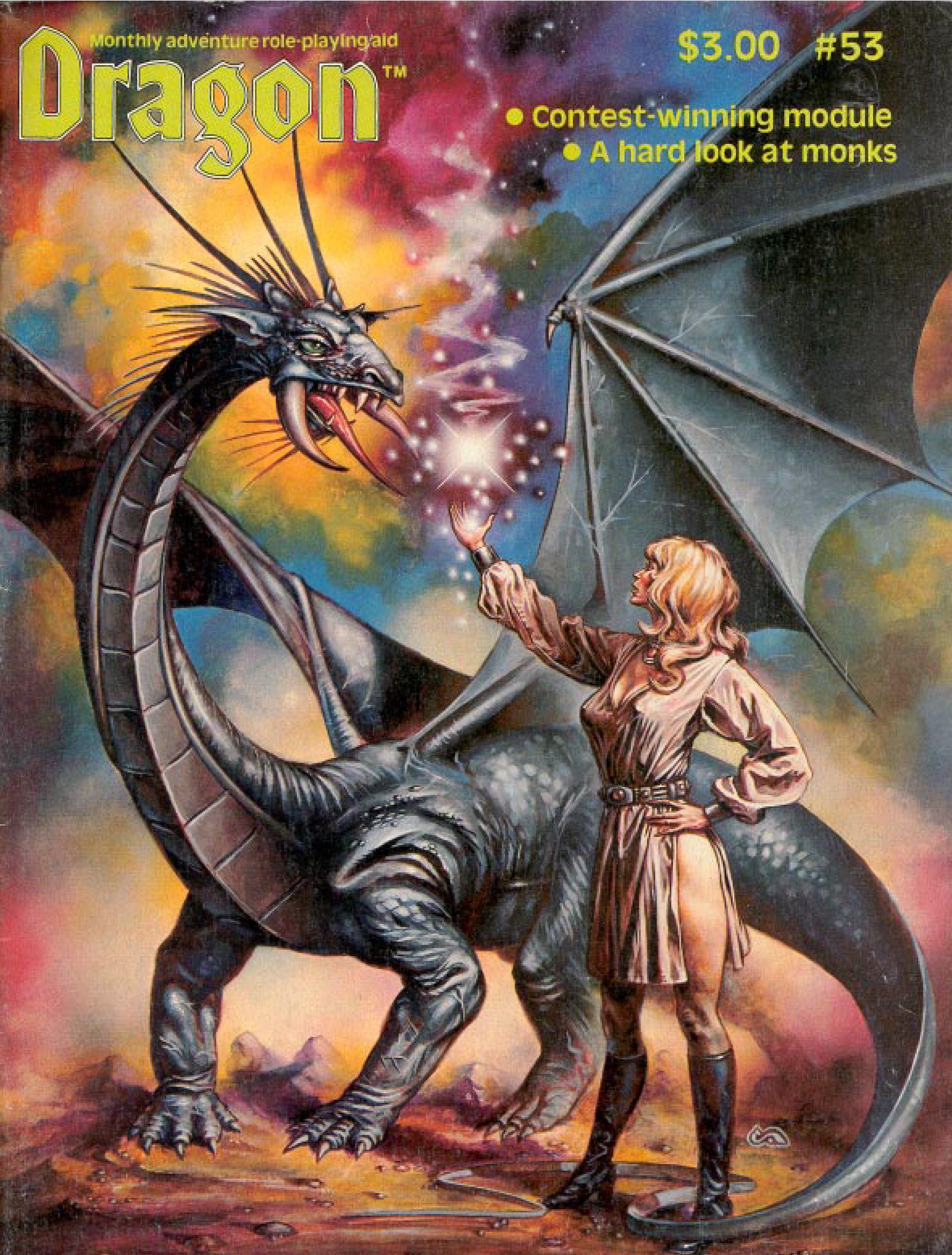 Publisher Jake Jacquet is disturbed by the rise of live-action "assassin" games, calling out Steve Jackson's recently released Killer: The Game of Assassination by name. In these games, which are still popular today, players eliminate each other using mock weapons. Jake personally finds these games distasteful and worries about the possibility of injury. He thinks it's important to distinguish them from the pen-and-paper variety of roleplaying games.

This month's special attraction is "The Garden of Nefaron," which is the winner of the AD&D division in the International Dungeon Design Contest. Written by Howard DeWied, it is a 16-page adventure that includes a short wilderness sandbox and two dungeon levels. The dungeon is heavy with tricks and traps, as was common in those days. The ultimate goal is a gem containing the soul of an evil wizard, which was already a well-used trope by 1981. There's a lot to like in this adventure. Unfortunately, the author does not seem to have published anything else in the RPG field.

There are three short feature articles concerning the monk. In "He's got a lot to kick about," Philip Meyers claims the monk is far too weak at low levels and offers up a revised ability table. I thought this was well done, and I especially liked that he gave the monk a new special ability at every level. Myers was best known for I7: Oasis of the White Palm.

Next, Steven D. Howard offers up "Defining and realigning the monk," which, in contrast to Meyers article, is largely positive about the monk as presented in the Players Handbook. Howard later wrote some supplements for Flying Buffalo but then dropped out of the industry. We also have a monk-focused edition of "Sage Advice." It includes questions such as, "If a monk's alignment changes from lawful to neutral or chaotic, does he become a thief?" The answer is no!

Andrew Dewar brings us a new NPC class called "The Oracle." He notes some overlap between his creation and other NPC classes, specifically the sage in the Dungeon Masters Guide and the astrologer in Dragon #45. However, he believes there is enough distinctiveness to make his new class worthwhile. The oracle learns new divination methods with each level, such as arithomancy, lithomancy, or pyromancy. Each of these works in a slightly different way. For example, lithomancy allows the oracle to cast several pebbles and determine a person's fortune (good or bad). There is some nice flavor here, though the mechanics are weak.

The ever-prolific Lewis Pulsipher has written a well-researched article called "Understanding Armory." It is primarily about heraldry and is a must-read for anyone who wants to create a coat of arms for their character. Over the following couple of years, Pulsipher would publish about two dozen articles in Dragon.

Contributing editor Roger E. Moore shares worldbuilding tips in "Some universal rules--making your own campaign and making it work." It is mostly common sense advice but probably helpful to beginners.

There is a new feature called "Larger than Life," dedicated to describing super-high-powered NPCs. This month's contribution is from David F. Nalle, an industry veteran perhaps best known for the Ysgarth game, who gives us D&D statistics for the Bogatyr warriors of Slavic legend. Mark Nuiver also shares some D&D statistics, this time describing the Triffids from the classic Jon Wyndham novel.

On to the regular articles! This month's "Up on a Soapbox" essay is "Adventuring with shaky hands," by Judith Sampson. Sampson has cerebral palsy, and she describes the joys and challenges that roleplaying games have brought her as a disabled player. This is one of those rare Dragon articles that is years ahead of its time, as disabled players are usually absent from the magazine's pages. Regrettably, Sampson appears to have published nothing else in the industry.

"Dragon's Bestiary" presents three new monsters for D&D. First is the Argas by James Hopkins II, a brilliant reptilian race dedicated to the fulfillment of good. Next, the Oculon by Roger E. Moore is a weird humanoid construct that has a large eyestalk in place of a head. Finally, the kindly Narra by Jeff Goelz has the body of a bull and the head of a human. It is my favorite of the three monsters.

In "Simulation Corner," John Prados continues his series on designing war games. And in "The Electric Eye," Mark Herro presents a rather tepid half-page of computer trivia.

"Dragon's Augury" reviews three new games. Stalin's Tanks by Metagamming "does justice to its subject matter and is easy to play." Warlock by Games Workshop is "fun to play" but "too expensively price." Finally, A House Divided by Game Designer's Workshop "does an excellent job of recreating the problems and decisions that the top commands of both sides [of the US Civil War] constantly faced."

And that's a wrap! The highlights for me were "The Garden of Nefaron" and "Up on a Soapbox." Next month, we have damaged weapons in D&D, Ed Greenwood's advice on creating a pantheon, and the Jabberwock!
Last edited by a moderator: Feb 1, 2022
Click to expand...

Supporter
What happened to Dragon Reflections #52?

Oryzarius said:
What happened to Dragon Reflections #52?
Click to expand...

Scheduling snafu on my part, Dragon Reflections #52 will be next, sorry about that!

I think this is the first dragon magazine I owned. The revised monk became the standard in my games the day I read the article.

Lord Mhoram said:
I think this is the first dragon magazine I owned. The revised monk became the standard in my games the day I read the article.
Click to expand...

I wasn't reading Dragon in 1981, actually I wasn't even playing, but as soon as I read that article in Best of Dragon III, I adopted the new rules.

I've considered converting that adventure a few times, but never have.

Oh man, I'm glad I checked in on this. The argas are pretty awesome--and one can easily argue that they, likely with no specific intent on the part of later creators, are a pre-figurement of the later dragonborn. Also proof that quirky, powerful, and vaguely-draconic humanoids were a thing all the way back in 1st edition at least. Exchanging magic items for innate power is a pretty cool mechanic, and actually semi-justifies the idea of race-as-class.

Lord Mhoram said:
I think this is the first dragon magazine I owned. The revised monk became the standard in my games the day I read the article.
Click to expand...

Our AD&D games also used this revised monk instead of the one from the PHB.

The first one was with the traditional mafia theme. Crazy sh@t happened with alarm clocks ringing at 3am under the bed of a friend to kill him using a 'bomb'. Fake parcels sent to the work place. It got out of hand. Even a slow speed car chase with water guns.

The second was Lovecraftian with a necrotic super serum that gave 3 lives to each participants. It took place downtown, within a predetermined area. On foot only. From 7pm to midnight for 5 evenings.

I wouldn't play this game today. The social environment has changed too much.

Mezuka said:
I wouldn't play this game today. The social environment has changed too much.
Click to expand...

Why not? Is it some sort of LARP game?

wellis said:
Why not? Is it some sort of LARP game?
Click to expand...

Really? Running around with fake (water) guns shooting at each other. Not a good idea. Even in the 80s, we had to explain ourselves to two police officers.

Mezuka said:
Really? Running around with fake (water) guns shooting at each other. Not a good idea. Even in the 80s, we had to explain ourselves to two police officers.
Click to expand...

Oh, so it is a sort of LARPish game. I thought it was tabletop game. Or at least a LARP game played in your home.

wellis said:
Oh, so it is a sort of LARPish game. I thought it was tabletop game. Or at least a LARP game played in your home.
Click to expand...

I'm going to go on a limb and says it's probably the ancestor of LARPs. We dressed up, spoke with accents and behaved like out character on the street. Long trench coats, fedoras, etc.

The cover artist is Clyde Caldwell, not Clive.

Didn't realize I'd fallen behind on reading these. Obviously I need to be more consistent about checking.

The only time I've played a game like Killer was my freshman year of college. We weren't using the Killer rules and just had a particular dart gun that had to be used. I remember that range and accuracy increased dramatically by cutting the suction cup down to the shaft. Still didn't hurt when getting hit, and it's not like you expect the dart to stick to a person.

I might have been the first person eliminated in the game. I don't think the game actually finished, as the college banned all Assassination type games pretty quickly. ¯\_(ツ)_/¯

Rereading this issue, it was very nice to see that "Up on a Soapbox". As mentioned, way ahead of the times to address such things.