Dragon Publishing released Dragon issue 55 in November 1981. It is 84 pages long and has a cover price of $3.00. In this issue, we have Gygax on Greyhawk, a complete D&D adventure, and the Fiend Folio! 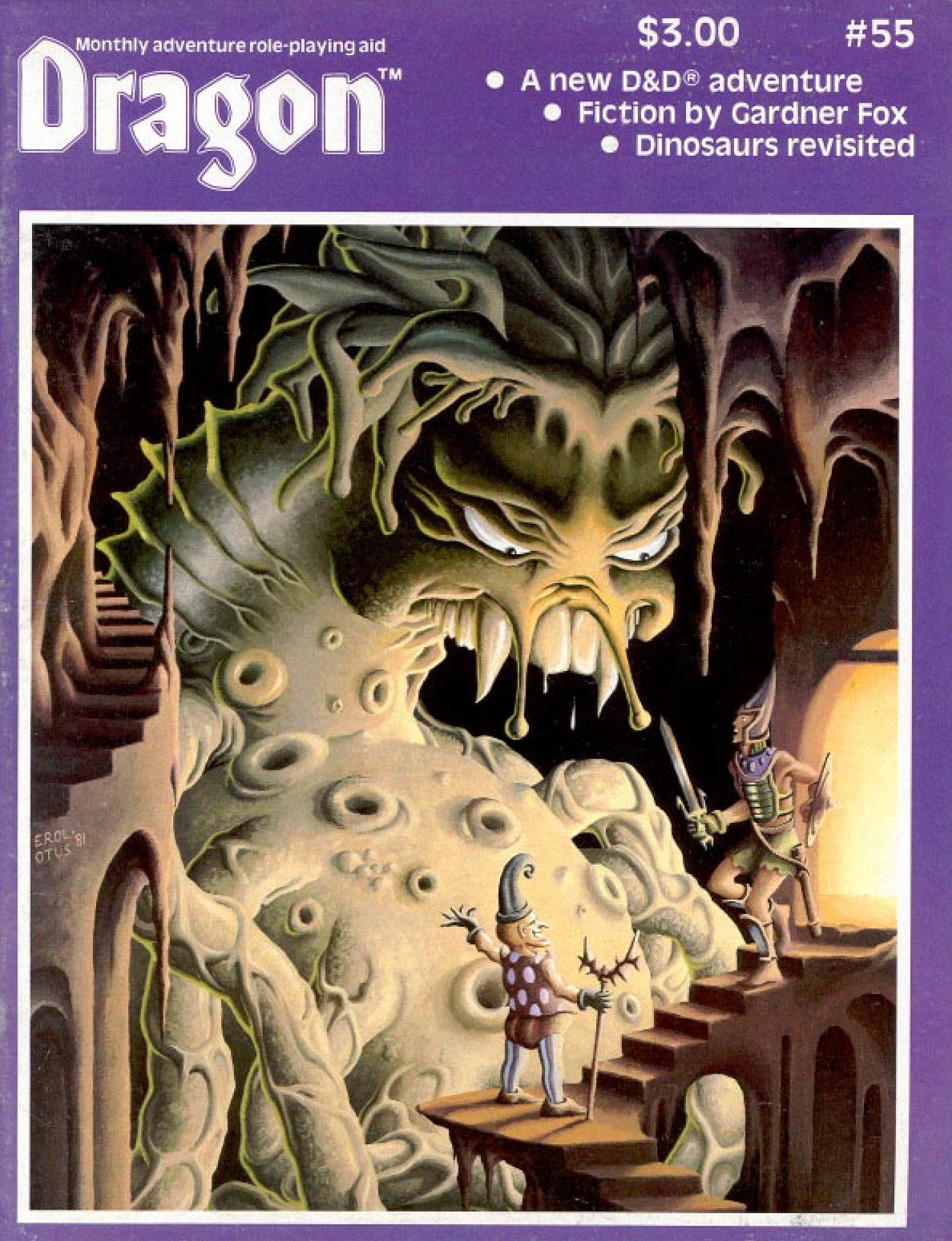 This month has two special features. First, "The Creature of Rhyl" is a D&D adventure by Kevin Knuth that was runner-up in the International Dungeon Design Contest: Basic Division. Your mission is to rescue the prince from an evil magician and his pet dragon. There are several engaging encounters, but too many rooms like this: "21. Cook's Quarters: Against the east wall are two beds. Each bed has only a mattress. In the middle of the room is a table and four chairs."

The second special feature is "The coming of the Sword," another Niall of the Far Travels story by Gardner Fox. This is the final time Fox appears in Dragon. Others appreciate these stories more than I do, but they have their charm.

TSR released the Fiend Folio a few months prior, and this issue contains two reviews and a response from the book's editor. Ed Greenwood was disappointed in the book, finding "too much lack of detail, too many shifts in tone, and too many breaches of consistency." Alan Zumwalt was a bit more upbeat, saying the book was "like a basket of peaches: most of it is pretty good stuff, but part of it is the pits."

Don Turnbull, the editor of Fiend Folio, gives a brief response. Turnbull was the Managing Director of TSR UK and the spiritual godfather of the British roleplaying scene. He acknowledges a few technical errors but says most of the criticism comes down to a matter of personal taste. In the years that followed, the reputation of the Fiend Folio has only grown, and most people now appreciate it as an imaginative collection of strange monsters. And it delivered some iconic creatures, such as githyanki, slaad, death knights, and flumphs!

There are several more features. "Dinosaurs" by Lawrence Schick presents new statistics for our favorite saurians, based on the latest scientific research. In "Robin Hood," Katherine Kerr gives us lore and stats for the famous outlaw and his merry men. Pat Reinken tells us how to retreat in "The many ways of getting away." It's a nice bit of D&D player strategy, and I wish Dragon published more articles like it. And veteran contributor Jon Mattson offers a revised skill system for Traveller with "Filling in Skills."

There's one other feature, though it's a little odd. "Da Letter" by Larry Elmore is a comic strip showing a bearded artist and his friends venturing into the cave of a dragon who owes them money. It was Elmore's polite way of asking Dragon Publishing to cough up the check they owed him, and Kim Mohan liked it so much he decided to print it. What's really interesting is that it features the characters from Elmore's popular comic, SnarfQuest, which would not officially debut for another two years!

On to the regular articles! "From the Sorcerer Scroll" is the first piece from Gary Gygax in over a year, and he notes that Rob Kuntz is now working with him to document the world of Greyhawk. Rob was one of the original players in the Greyhawk campaign and later its co-DM. He worked for TSR in the early days but left around 1977 due to creative differences. Gygax lays out a mouth-watering menu of future products, but few of them materialized before he himself left the company.

"Dragon's Bestiary" presents four new monsters for D&D. First is the devil spider by Erol Otus, accompanied by a splendid illustration. Next is the surchur by Jeff Brandt, a Lovecraftian humanoid with tentacles emerging from its headless neck. We then have the dyll by Ed Greenwood, which resembles a tiny, flying shark. Finally, there is the poltergeist by Craig Stenseth, which is now a D&D staple.

In the "Electric Eye," Mark Herro has the answers to last month's computer quiz. Next, Glenn Rahman presents another "Minarian Legends," this time describing the various monuments in his world. Finally, in "Simulation Corner," John Prados continues his game design series.

And that's a wrap! The highlights for me were the cover and the Fiend Folio discussion. Next month, we have a feature on bards, more Sorcerer's Scroll, and a Top Secret module!
Click to expand...

I love that Erol Otus cover. I spent hours contemplating it back in the day, and tried to build an adventure around it.

This was the first Dragon I read (parts of)!

I wasn’t allowed to read all of it because my friend ran us through ‘The Creature of Rhyl.’ The rotating room puzzle gave us much trouble. IIRC though, I think my 11-yo DM substituted a wyvern for the white dragon at the end.

would love to know the background of the photo. is the gnome under a charm spell. fashion choices 2

Not the first Dragon I read, but still the oldest I own.

Loved that cover, and we'll just disagree on whether adventures should have mundane rooms, I guess....

First one I bought. Was it the cover? Yes, yes it was.

An 18 year old me loaned this one to my then-girlfriend's 15 year old brother. Relationship with girlfriend ended. Dragon magazine never came back. Even Erol Otus couldn't solve that one for me!

Zaukrie said:
Loved that cover, and we'll just disagree on whether adventures should have mundane rooms, I guess....
Click to expand...

I'm more than happy for adventures to have mundane rooms, but this adventure had a few too many for my taste.

M.T. Black said:
I'm more than happy for adventures to have mundane rooms, but this adventure had a few too many for my taste.

M.T. Black said:
I'm more than happy for adventures to have mundane rooms, but this adventure had a few too many for my taste.

I don't think we can hold these very early adventures to the same standards as modern ones. It was a very different time, but I get your point.

this was the first Dragon I ever bought. In later years, I picked up a few earlier issues, and a lot of later ones. Alas, many years and many moves eroded my collection down to about 30 magazines, but I still have this one....