Dragonlance is back, and not just with the RPG adventure book Dragonlance: Shadow of the Dragon Queen (I expect a release date announcement on August 18). Dragonlance: Dragons of Deceit is a new novel by Margaret Weis & Tracy Hickman and the start of the Dragonlance Destinies trilogy. 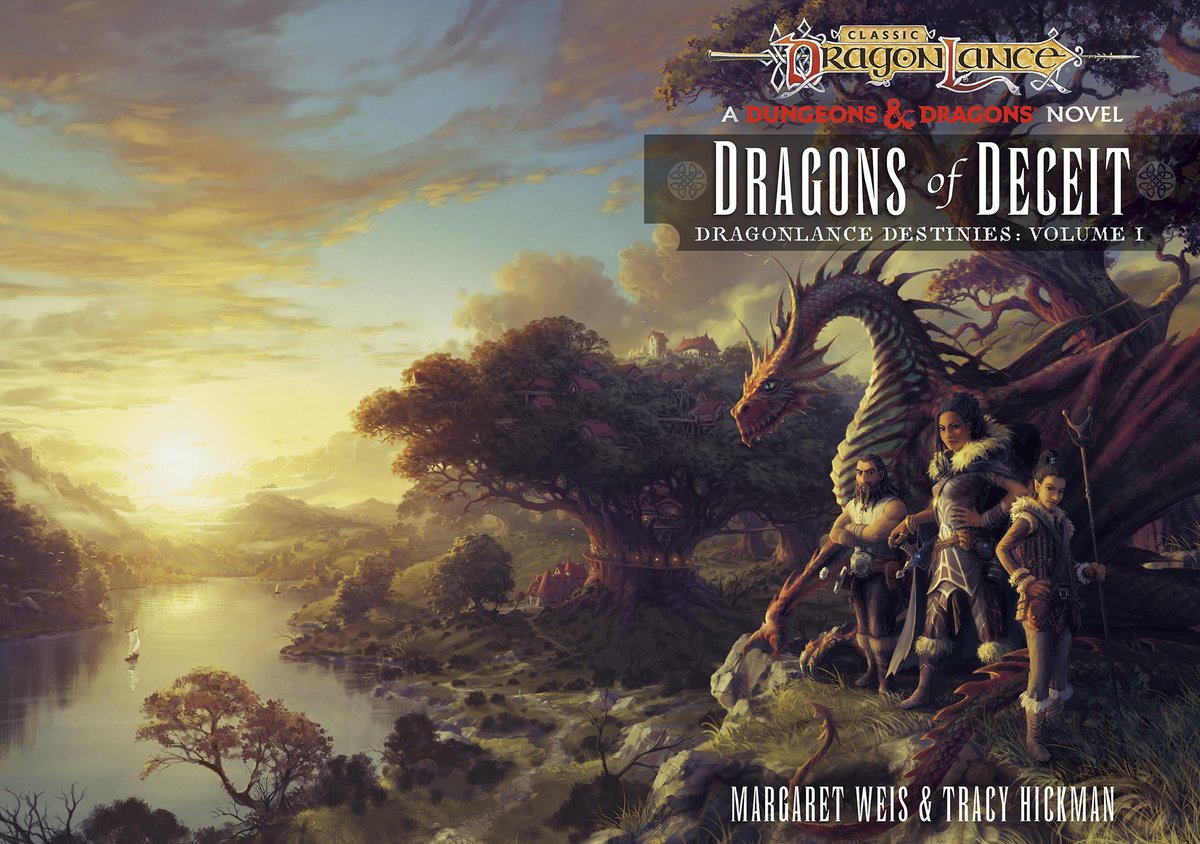 Of course, Dragonlance has never really gone away. Even after Weis & Hickman left TSR and other authors were hired to write Krynn novels, the original duo have regularly returned to their fan-favorite series in addition to some novels written by Weis alone. Still, the last completely new novel by the pair was 2009's Dragons of the Hourglass Mage so it's been a long time.

If you're a Dragonlance fan, you'll be happy with DDoD. Weis & Hickman are still at the top of their game, and while this is a new story, familiar faces make an appearance with even more named. Prior knowledge of Dragonlance isn't necessary, but if you are a fan, you'll immediately recognize a lot of references.

Destina Rosethorn, daughter of a Solamnic knight, has been raised to follow The Measure, care for her hereditary lands, and maintain Castle Rosethorn as a line of defense against the forces of evil. Even when tragedy strikes her family, Destina continues as she was taught – until another loss strikes and upends everything she expected from life. Destina decides the solution is to go back in time, using the Device of Time Journeying, to save her father during the War of the Lance.

While I think Dragonlance fans (and I've always considered myself one) will enjoy or even love this book, that last sentence is part of the reason why I didn't enjoy this novel as much as I expected. I've been a lifelong fan of science fiction and fantasy, and grew up on Star Trek time-space continuum shenanigans and Doctor Who, so time travel is not a deal breaker for me. 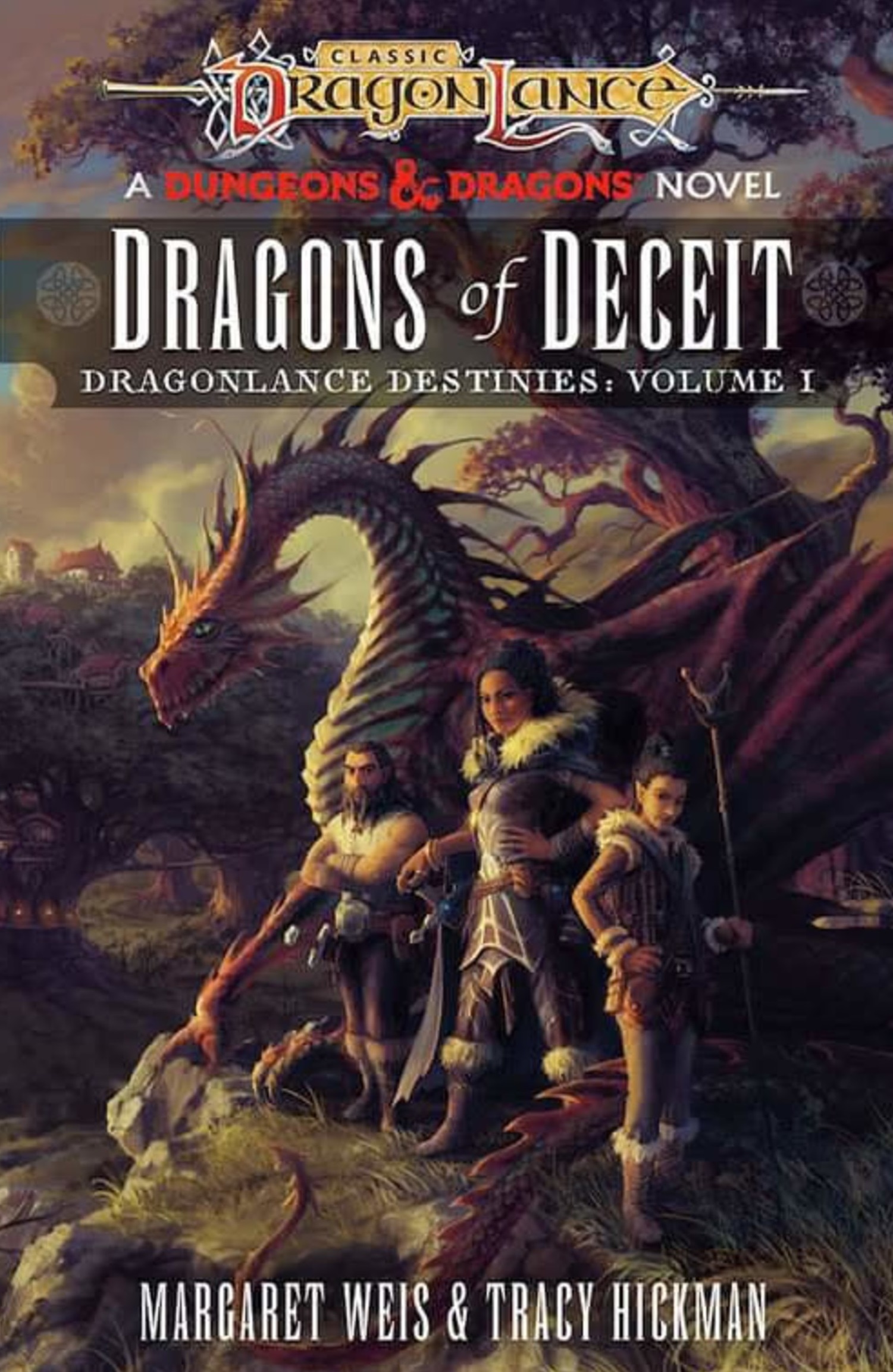 Even in a world where dragons and magic exist, I trip over Destina's leap in logic. Citizens of Krynn have experienced magic, lived through the return of the gods and clerics, and likely have seen dragons fly overhead, but time travel is beyond rare. People view Tasslehoff Burrfoot's stories of his time-travel adventures as Kender exaggerations. I understand Destina's desperation, but that's quite the leap. Maybe it's just that Destina sometimes comes across to me as more immature than I expect from the Destina depicted in the early chapters.

Or maybe my tastes have changed since I originally read Dragons of Autumn Twilight. Both books open with a location description, but DDoAT focuses on Tika and her thoughts while also describing The Inn of the Last Home, whereas DDoD begins with a several paragraphs description of Castle Rosethorn before Lord Gregory even appears. It wasn't exactly a grabber.

I'm used to Tasslehoff being flighty, but his refusal to accept the truth of a plot-point, even after it's been repeatedly explained just rubs me wrong. There's a difference between being trusting and denying evidence.

Worse, I didn't feel an emotional connection to the characters or Destina's dilemma. I enjoyed DDoD, was interested in the plot, and I'm curious about the rest of the trilogy, but I didn't feel any tension or emotion like I did while reading Drew Hayes' NPCs or Travis Baldree's Legends & Lattes. Yet when I compare DDoD to Weis & Hickman's earlier Dragonlance novels they all fit together, so the disconnect is mine.

Also, time travel trilogies can be tricky to accurately evaluate while incomplete. I might look back when it's over and love this book. I hope so.

The hardcover is nicely made with end-papers that show the map of Ansalon. If you prefer audiobooks, reader Kirsten Potter is very good. Whether voicing Destina, her parents, Tika, Caramon, Tas, Dalamar, or others, Potter changes her voice so you know exactly who is speaking before you get to the attribution. Most fiction audiobook readers try to do that, but don't accomplish it nearly as well as Potter does.

If you love Dragonlance, Dragons of Deceit will likely be an A or an A+ for you even though for me, it's currently a solid B to B+. Fan of epic fantasy but new to Dragonlance? It'll be somewhere between a B and an A+, depending upon your exact tastes. And despite my hesitation, I am interested in the next book, Dragons of Fate, and I think that's a truer sign of my Dragons of Deceit review than a letter grade.
Last edited by a moderator: Aug 4, 2022
Click to expand...

Henadic Theologian said:
It's better then the reviewer made it out to be, the reviewer left out a key point that makes it all make more sense. I don't want to spoil everything, but it's pretty simple really.


in basic terms Destina is the Chosen of Chaos/Greygem(I'm boring an FR word for lack of DL word), she ends up wearing the a cracked Greygem which leaking chaos, warping magic events, including a charmed Tas. [spoiler/]

Yea, that's not helping to sell me on it. I enjoyed the first few DL books as a kid, but have never dared go back and re-read them. Even then I knew they were more about my own imagination and filling up my time than something I would enjoy again and again. But glad others can.

I haven't picked it up yet, but I admit if rather have new characters

I agree...but I would put the point for me when the book shifts to other characters as the primary points of view. And maybe that's the point? After that, it became clear that she was actually the main antagonist of the story.


Dire Bare said:
Destina was easy to like in the first few chapters, during her backstory. But once she sets out on her quest, she becomes very unlikeable, to me. Luckily, several of the characters she meets would agree, and they are a delight! I enjoyed Sable the copper dragon, and Wolfstone the Daergar dwarf, and Tasslehoff!
Click to expand...


That was an interesting name-drop. I liked that Ungar got some of the details wrong (or at least, from what little I know, he did) - I'm not sure if that's just supposed to show how cross-world rumor isn't reliable, or to emphasize what a charlatan he is.


Dire Bare said:
Right! When Joe Manganiello's favorite D&D character, Arkhan the Cruel, gets name-dropped! That was an interesting call-out!
Click to expand...


I finished the book this morning and enjoyed it. It was enjoyable returning to Krynn, seeing familiar places and faces described in the text. Their writing has definitely improved over the years.

The depictions of Kender and how they are treated by society at large was painful - seeing them segregated from the other races at the Inn of the Last Home was particularly ugly and tone-deaf considering all the discussions about fantasy and race that have happened in the last few years.

And I'm not sure I completely get how they're handling the effects of time travel; but when you start using time travel as a plot device, it's almost always going to have holes in it that require an extra spackling of Suspension of Disbelief.

Nonetheless, I am very excited to see where the next book goes.

I'm maybe a 5th of the book in, so far, so good. I love how we learn about the things going on elsewhere in Ansalon.

rooneg said:
Honestly, it’s fine. It’s not great, but it’s fine. Like, if I was looking at the earlier Dragonlance books through eyes not clouded by nostalgia I’d probably also think their writing was just fine. That said, I’ve recently reread the original Chronicles and Legends, and I do feel like the writing here doesn’t quite measure up when I compare them.
Click to expand...

So I finally read it, and I agree with this 100%. I don't know what happened, but the writing in this book seems a lot weaker than their previous efforts. This isn't nostalgia speaking either, as I recently reread the original Chronicles. This book doesn't flow nearly as smoothly, and I can't quite put my finger on what seems so off. I think it's like they cut down the sentences into very small bits instead of a nice flowing sentence.

Sort of like:
She threw a ball. It was a football. She threw it far. It flew in the air over some orcs.

When it feels more natural to read it like:
She threw a football far in the air, over some orcs.

And for the record, I loved the original books when they came out, so I'm not a Hickman/Weis hater by any means.

DragonBelow said:
I'm maybe a 5th of the book in, so far, so good. I love how we learn about the things going on elsewhere in Ansalon.
Click to expand...

Wow, took me more than a month to finish it. Part 3 was my favorite. What happens next!? I can't wait for the next installment!

DragonBelow said:
Wow, took me more than a month to finish it. Part 3 was my favorite. What happens next!? I can't wait for the next installment!
Click to expand...

Part 3 had both my wife and me loudly yelling naughty words because the stakes kept getting upped. Loved it, wasn’t expecting quite so much, can’t wait for the next one.

deganawida said:
Part 3 had both my wife and me loudly yelling naughty words because the stakes kept getting upped. Loved it, wasn’t expecting quite so much, can’t wait for the next one.
Click to expand...


That's funny, my gf kept looking my direction every few minutes as I read the final chapters for the same reason!

I was like, "surely they wouldn't!" and a few minutes later "oh shoot!", and so on lol

Dragonlance Read The Beginning Of Dragonlance: Dragons of Deceit!
2 3 4

Dragonlance Dragons of Deceit: Check Out the Dragonlance Novel Cover
2 3 4 5