Eagle-Riding Knights: A Last Look At Bruce Heard's BEYOND THE SKIES

Bruce "Voyage of the Princess Ark" Heard's Beyond the Skies Kickstarter ends on Thursday. It's funded, and it's moving through stretch goals, and Bruce has sent along a new preview of the book. This excerpt looks at the Sky Warriors of Phrydias, an order of half-elven knights who ride majestic giant eagles. System-agnostic, this 220-page colour book works with any fantasy RPG and is the second book in the World of Calder setting, covering the faiths and deities of the Great Caldera. 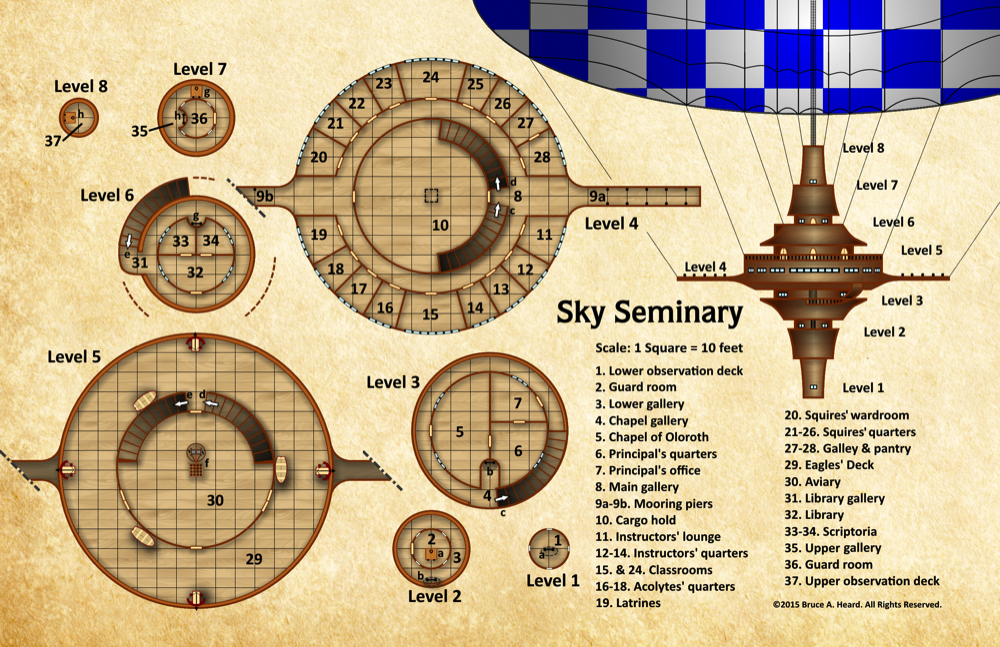 [h=4]Sky Warriors of Phrydias[/h]
This order of half-elven knights originally formed in honor of an epic hero by the name of Bambathiel. His legends tell of the first recorded case of a Calderan eagle being tamed as a mount. The giant raptors are reputed for being particularly difficult to approach, let alone to befriend and ride like a horse. Magic sometimes works in this respect, but followers of Thaëldar see this as an insult to their deity. For them, Calderan eagles embody their Lord of the Skies. Being entrusted with one is nothing less than a holy gift requiring utmost respect and devotion.

Bambathiel died in a fight with a night howler, a great beast of evil that had been preying on Calderan eagles in the Kaël Mountains. Though he who became known as the First Knight defeated his mythical foe, his wounds and those of his majestic mount were awash with deadly poison. No prior in Phrydias could stop its spreading, and both died in writhing pain. The High-Prior of Thaëldar prayed for their return to life, but the Great God of the Skies decided to keep them both at his side. Since then, faithful followers of Thaëldar, those who are pure of thought and brave at heart, have created the Order of Sky Warriors in memory of their fallen hero. Bambathiel and Oba Eagle-Lord together became scions of the cult and the order’s spiritual protectors.

The night howler is an enormous beast that sometimes appears late at night. It is born from the nightmares of slumbering evil Phrydians, and vanishes before dawn. What is unclear, however, is why so many people would make the same horrid dream during one fateful night. No Bongorese literature had ever mentioned night howlers. A sect of malevolent wizards or perhaps a demon are thought to be at work, summoning the beast when the moons are right, perhaps as the consequence of an unholy ritual planting seeds of evil into many a weaker or disturbed mind. Priors of Thaëldar have come to believe that in the heart of the eagles lies great spiritual power, which the wicked covet for their evil deeds. What they do with such wondrous power remains a mystery. As the beast unexpectedly rises again to wreak havoc upon Thaëldar’s flock, the knights scramble to deny the odious harvest. In truth, the beast springs from a curse. It was cast by the demon-prince Kokumo, when Thaëldar cast his spear at him.

This order is the armed chapter of the Faith of Thaëldar. Aside from safeguarding breeds of eagles small and large, they live to protect of the Sky God’s temples in Phrydias and elsewhere. A contingent resides in northwestern Alfdaín where the cult has found significant following. Their ethos is neither fundamentally malevolent or purely benevolent. Their philosophy concerns more specifically the order of all things in the universe. Most members of Thaëldar’s fanatical legion stick together as a military organization. Others ride their fabulous mounts, travelling the world in search of clues about who or what lies behind the summoning of night howlers. They are avengers, adventuring warriors looking for a worthy cause for the purpose of acquiring goodwill toward their quest and their faith. Their beneficiaries are to watch for defilers of great eagles and for clues about the night howlers, and alert them if such comes about. Following the belief that evil doers dwell in evil places, sky warriors aren’t loath to exploring dungeons and other places of despair, for hints may lie there was well.

Isn’t a knight anyone who desires it. Prerequisites include being at least a pious follower of Thaëldar. In this regard, race is not an issue. To become a squire, one must already be a fine warrior or a skilled prior (one with the experience of at least a dozen worthwhile dungeon expeditions should qualify). A time will come when the squire will have to seek out a giant eagle’s nest high in the Kaël Mountains and earn its occupant’s respect, a perilous quest on its own. Magic of any kind, clerical or otherwise, is not permitted, and the squire must act alone. Should a glorious fate shine upon the squire, an egg will be available for the taking. It must be safely returned to the order’s sanctum, wherein its new owner will have to care for it until it hatches. The squire must raise the young eagle, nurture its growth, earn its loyalty, and train it as a mount. Raising a giant eagle can lead to a tragic outcome, as accidents do happen. If randomness is desired, roll on the table below.

​
Priors of Thaëldar will not use their magic to undo any result from the above table. These are fates ordained by Thaëldar, which should not be tampered with as a sign of faith and respect for the Sky God.
During their apprenticeship, squires spend time at the order’s Sky Seminary, a flying school well above Phaeroth. There, they undergo intense training before and after having secured their eagles. Different curricula are taught during the year. Junior squires, those without eagles as of yet, earn the opportunity to study the giant raptors up close. For this purpose, elderly knights act as their instructors, featuring their own birds, older and more placid creatures that are a tad more forgiving than their younger kin. A high prior acts as the educational establishment’s principal. The seminary is a lightweight structure built of wood and canvas hanging from a giant balloon. Magical buoys prevent the structure from drifting away with the winds, enabling only the gain or loss of height to avoid storms. The seminary’s exact position in the sky can be controlled directly from the chapel. Enchantments negate the effects of high altitude on temperature and air pressure. Generally, junior squires sail skyships to get reach the seminary. More senior squires fly their own eagles. Onboard flying skiffs can also be used to pick up and drop off visitors.

Once a year, the order holds Sky Trials, during which squires and their mounts must demonstrate prowess and bravery. If the rider dies, the eagle returns to its place of birth. If the eagle dies, the squire has failed and must leave the order. If they merely survive, the two must continue to learn working together. If they prove themselves among the best, the squires become knights and the mounts their familiars, creatures forever bound to them. Riders and eagles, from this point on, communicate through empathy. If a prior originally, a knight ceases to progress along this career path and starts a new one, as a warrior. All previous clerical abilities are retained; new warrior abilities become relevant when they exceed those already acquired as a prior.

Knights must take their final vows of loyalty and life service to the order at this time, becoming fanatic disciples of Thaëldar if they weren’t already. They can choose between the Path of the Sword or the Path of the Wing. The former is the life of a militant knight, training for war and adopting army discipline. The latter concerns adventurers seeking to spread the faith of Thaëldar and unveiling clues about their hated foe in darker places. Commanding priors reserve the authority to recall any or all wandering knights for specific missions or should war erupt, requiring the order’s intervention.

Squires and knights are not permitted to replace mounts slain in wartime, and must either leave the order or become regular priors. If the second option is chosen, knights cease to progress along this career path and start a new one, as priors (or resume progress if they had originally been priors). All previous warrior abilities are retained; clerical abilities become relevant when they exceed those already acquired while a knight. In defiance of traditions, fallen eagle riders may seek to acquire another mount after departing the order and, should they ever succeed on their own, they become pariahs, blasphemous rogues wanted and hunted down by their past brother knights. This also entails abandoning their faith in Thaëldar.

[h=4]About The Kickstarter[/h]
Bruce has sent along a quick synopsis for those not yet familiar with this project:

For those of you who are unfamiliar with Calidar: this new release goes beyond bringing to life fantasy gods, their personal relations, and politics between pantheons. It also provides a massive list of individual powers available to mortal followers, zealots, and priests (based on their piety levels), as well as divine favors encouraging desirable behavior, and divine wounds reflecting discontent among deities. "Beyond the Skies" unveils new information about world souls, the Dread Lands, native monsters, shamans of the tribes, spirits of nature, and seitha prospecting. Divine servants, demons, incarnates, and household godlings also make an appearance, along with a host of floor plans detailing temples and the lairs of secret brotherhoods, each an invitation to run adventures. Calidar's background dynamics involve a dark peril that threatens to destroy both the divine pantheons, the world souls, and the mortal universe, evoking a pervasive sense of impending doom.

This book is crucial for the understanding of Calidar as an RPG campaign setting because it fleshes out a lot of information about the ten realms of the Great Caldera and the origins of their peoples. In its own way, it qualifies as a macro-gazetteer. It will directly impact all future gazetteers, and thus is a must for fans of this game world. The pantheons are also designed in a such a way that they can be used in other game settings with minimal trouble. If you haven't jumped in yet, what are you waiting for?

Find the Kickstarter here, or click on the banner below!

New rewards have been added recently to the project. Find all the details here: https://www.kickstarter.com/projects/ambreville/calidar-beyond-the-skies/posts/1453790

Missed the Kickstarter, have you? Good thing there's a safety net. Just don't wait too long. Click here for details.