Last week, I surveyed my fellow gamers about the original Dungeons & Dragons game that was released in 1974. Three years later, two new D&D products would hit the market. The first of them was the D&D Basic Set, and I'm curious how many of us remember playing it. (Or are still playing it, maybe?)

By "played," I mean that you've been either a player or a DM for at least one gaming session. And for the purpose of this week's survey, I'm only referring to the Dungeons & Dragons Basic Set rules, the ones that were first published in 1977. Also called the "Holmes Edition," with this awesome cover by John Blanche David Sutherland: 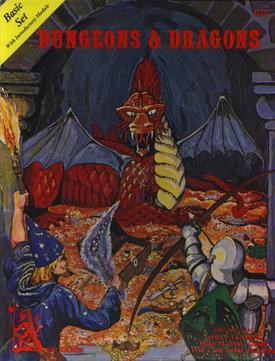 Feel free to add nuance in your comments, but let's not have an edition war over this. I'm really just interested in hearing peoples' stories of playing the Basic Rules Set, and fighting over the coveted polyhedric dice (they were quite rare back in the day, and apparently this edition caused a dice shortage.)

The 77 edition is often called the Holmes Basic edition.
Nothing to add to what I said in the OD&D thread.

That is a David Sutherland cover.

I started with the LBBS and this and a MM. So yes. Played it. Still run it on occasion, especially now that Dr. Holmes' original manuscript made it's way into the public after all these years.

This BLOG series is a must read if you are remotely interested in the Holmes Basic set. It goes through all the Edits TSR did to the Good Dr.'s original manuscript and solves a lot of the :scratcheshead WTF? : rules issues about the published booklet.

I didn't get a chance to play this version either. I started playing when I was in middle school, and by then, the AD&D/BECM games had totally taken over the hobby. I don't think I've ever seen a hardcopy of this edition.

But I'm always down to try something new. (Or old, as the case may be.)


JeffB said:
That is a David Sutherland cover.
Click to expand...

Actually looking at the cover I remember now. My first game of D&D ever was with this edition! I met a friend of my best friend at a presentation of Ralph Bakshi's LOTR animated movie. When we came out I said it would be great to have a game were you could play LOTR characters. The guy said there is a game called Dungeons & Dragons. I was floor.

A while later I went to his home and played a solo player game with him as DM. I wanted to be Gandalf so I played a Magic-User and rolled 1 for HPs, non constitution. My character died 3 times in the first room against the same kobold. For the 4th attempt I asked to have 4 HPs but he refused saying it was how the game was played. It was not a very good experience. I left never wanting to play D&D ever again.

Luckily my parents had seen my interest in LOTR and D&D. They gave me the Moldvay Basic set that Christmas. The rest is history. I've been playing D&D practically non-stop since 1981.

I don't think I'd bother playing with this edition of basic now, I'd rather go back to the Rules Cyclopedia. Especially if you add in the various classes from the Mystara Gazetteers for a bit more variety.

I just fully read the criteria for this thread, and my comment is out of line.

Call me when you have a poll about the Rules Cyclopedia, which I am currently playing and is easily my favorite version of D&D ever.

Rob Of The North

This was my first edition, and to this day I still run people through the ruins under the wizards tower. The map had unusually large rooms but great encounters.

I wouldn't play it again as B/X was a better rulebook.

We played this, but it had a blue box iirc.
It was good, but then MM and then PHB AD&D came out, and we never went back to playing this. I wouldn't want to play it now. If I recall, you were limited to 4th or 5th level? That was a deal killer for us.

Holmes edition. Yep. It's great. But BECMI is best.

Played it when I was 12, loved it. Have no interest in playing it again.

Didn't realise you were referring to the 1977 Holmes edition.

Rob Of The North

Eyes of Nine said:
We played this, but it had a blue box iirc.
It was good, but then MM and then PHB AD&D came out, and we never went back to playing this. I wouldn't want to play it now. If I recall, you were limited to 4th or 5th level? That was a deal killer for us.
Click to expand...


The rulebook is a blue version of the box cover. You're probably remembering that. It did indeed stop at 3rd and players were encourage to switch to AD&D after that. The weird thing is that the monsters included some that were way above the ability of 3rd level characters.

When I was learning D&D when I was 10-11 back in the early 80s, I used a mismatched set. My Basic was from BECMI, and my Expert was from B/X. Little kid me never realized they were two different editions.
Since the question is about Basic, I marked "Never played, but would like to."

edit: Ah! nvm, this is the pre-B/X Basic. Wow, still confusing to me, heh. My answer in the poll stands, though.

When my brothers and I and our best friend got into D&D we didn't have anyone to teach us. So we gathered the blue box, 1e MM, 1e PHB, and some Arduin Grimoire dungeons and played with those not really knowing they were different things.

Doug McCrae said:
Played it when I was 12, loved it. Have no interest in playing it again.

Didn't realise you were referring to the 1977 Holmes edition.

Theo R Cwithin said:
edit: Ah! nvm, this is the pre-B/X Basic. Wow, still confusing to me, heh. My answer in the poll stands, though.
Click to expand...

Yardiff said:
When my brothers and I and our best friend got into D&D we didn't have anyone to teach us. So we gathered the blue box, 1e MM, 1e PHB, and some Arduin Grimoire dungeons and played with those not really knowing they were different things.
Click to expand...

Yeah, things got really complicated in the early days. It's hard to keep all of these different editions straight, even with dates and pictures of the cover. Lots of folks remember these editions under different names, or with incorrect names, or in piecemeal with other versions.

The first D&D edition war probably started when someone tried to use a Moldvay rule in a Holmes game, and an argument erupted over which version was the "one true Basic" version of D&D.

So I tried it in the mid 90s with the Rules Cyclopedia. I didn't like that it was overly simple at the time but I was starting to turn from AD&D to games like Shadowrun and Vampire so I was moving into a whole new paradigm of RPGs that D&D was not very emblematic of. I tried again in 98 but it just wasn't for me. I did play a game in 2007 that was a lot of fun though and enjoyed the rules for their simplicity in comparison to 3e.

Holmes is one that is a great mystery to me. It's not that I didn't play it, but the set I played it I could swear the elves were handled differently than most remember it. I remembered my set had it that elves were Fighters and Magic-Users but had to choose each adventure which one they were going to be and advance in.

People have told me that this was only in pre-production sets and not in productions sets, but I could swear the copy I had first had this rule in it (the sets I have now which I got later do not seem to have this).

I enjoyed it for what it was. It was more an introduction to OD&D or AD&D (your preference I guess) but somewhat different from either one in many ways.

I first played Basic after playing AD&D, and felt it was a vastly more limited and inferior game.

Originally voted that I'd played this version, but didn't realize you meant the Holmes version. We had a copy of it, but used the B/X version instead.

OD&D The iconic painting for the original D&D Basic Set is on display in a museum!