5E Godzilla is coming to Magic the Gathering, will he be stomping on Waterdeep next?

Hexmage-EN said:
I'm a huge Godzilla fan, but I doubt a D&D statblock for him would do him justice.

Over the course of Godzilla's film career, he has:

You forgot it survived several thermonuclear bomb attacks (Godzilla 2014)
That being said, I do think you can do a stat block for it (and I have), you just have to be willing to go beyond the norm.

dave2008 said:
Please, one blast of BigG takes out the BigT. Not to mention the BigG is nigh indestructible and has regeneration too.
Click to expand...

BigT also is nearly indestructable and has regeneration, and has immunity to fire and magic resistance.

I kind of like the 13th age approach to behemoths for kaiju: they are too big and powerful for the PC's (or even the Tarrasque) to affect. You would need to be epic (the barbarian becomes an Ultraman [because Ultramen can only stay in Ultra form for so long in Earth's atmosphere is kind of like rage time limits], etc.) or get some kind of magguffin to fight to win against one. The best you can normally do is survive and maybe lure it outside of the city.

If I had a choice of setting for Godzilla to show up in, it would probably be Eberron, as they would probably try to build Mechagodzilla to fight him (and it isn't likely that a god, big wizard, or magguffin would be available to save Sharn). On the plus side, Godzilla isn't a fan of multiheaded dragons, so they don't have to worry about Tiamat getting free.....

gyor said:
The Tarrasque makes Godzilla look like someones pet Lizard in comparison. If the Tarrasque got unleashed on Tokyo, there would need to build a new Japan from the wreckage.
Click to expand...

gyor said:
BigT also is nearly indestructable and has regeneration, and has immunity to fire and magic resistance.
Click to expand...

And none of that helps, but thanks for reminding me of things I already know!

I totally want the creature type - kaiju. Move the Leviathan in there

gyor said:
BigT also is nearly indestructable and has regeneration, and has immunity to fire and magic resistance.
Click to expand...

FYI, depending on which version of Godzilla your talking about, her breath weapon would be either radiant, force, lightning, or necrotic damage (or a combination of those). You could also add fire as a 2nd effect

Also, MM Tarrasque js 50-60 ft long or tall (don’t have my books), while Godzilla ranges from 180ft to 1,000ft tall (depending on which version). So orders of magnitude difference in bludgeoning, piercing, & slashing damage

Uni-the-Unicorn! said:
FYI, depending on which version of Godzilla your talking about, her breath weapon would be either radiant, force, lightning, or necrotic damage (or a combination of those). You could also add fire as a 2nd effect
Click to expand...

I've only ever seen what looks like fire to me, but I'm not a Godzilla expert. Still either way Godzilla has no way to permanantly put BigT down.

gyor said:
I've only ever seen what looks like fire to me, but I'm not a Godzilla expert. Still either way Godzilla has no way to permanantly put BigT down.
Click to expand...

In 5e, nothing special is required,if I remember correctly, to put the Tarrasque down. I realize a wish was needed in older versions.
Of course it could be argued the same for the Tarrasque versus Godzilla

If one treats Godzilla's breath as magical, reflective carapace should take care of it,

If one treats Godzilla's breath as magical, reflective carapace should take care of it,

Except it specifically says “spell” and I would assume dragon breath and Godzilla breath work.

I do admit 5e, is kinda weird on this point.

Uni-the-Unicorn! said:
In 5e, nothing special is required,if I remember correctly, to put the Tarrasque down. I realize a wish was needed in older versions.
Of course it could be argued the same for the Tarrasque versus Godzilla
Click to expand...

Didn't in previous editions it required a wish spell and some other stuff. I forgot how hard they nerfed the Tarrasque in 5e.

gyor said:
Didn't in previous editions it required a wish spell and some other stuff. I forgot how hard they nerfed the Tarrasque in 5e.
Click to expand...

Yes, the 5e version also doesn’t have regeneration, which is a crime IMO

D'Compose was a study in how the 80s was totally okay with terrifying kids. That monster was cool, but so very creepy.

I would not be opposed to a Godzilla-themed D&D adventure. Sure, it'd be a hokey crossover, but sometimes there's nothing wrong with that.


MechaTarrasque said:
D'compose rocked--not only did he turn you undead with a touch, but giant-sized undead to boot.
Click to expand...

I guess we are talking about faithful adaptation vs gameplay. This is not only happens with the kaijus, but also with the superheroes, and not only TTRPG but also with videogames and miniatures wargames, where Batgirl can defeat Uxas Darkseid or Daredevil vs Superskull. You know the power level is totally broken.

If we want a d20 version of the famous franchises monsters and characters, you have to accept these are going to be nerfed. Other option is characters with summoning powers to call avatars based in famous legendary heroes and kaijus. The summoned monster pets wouldn't be the original but more like totem spirits wearing "cosplay". Then the paladin summoning Captain America only would call a spirit with his image, but the original soul of Steve Rogers would be still in the Marvel Universe, or a necromancer summoning lord Soth wouldn't be calling the original from Krynn, but a spirit with his image.

* Have you read Hasbro will publish a Godzilla version of Monopoly? I would bet we can see other crossovers Toho Studios + Hasbro franchises. 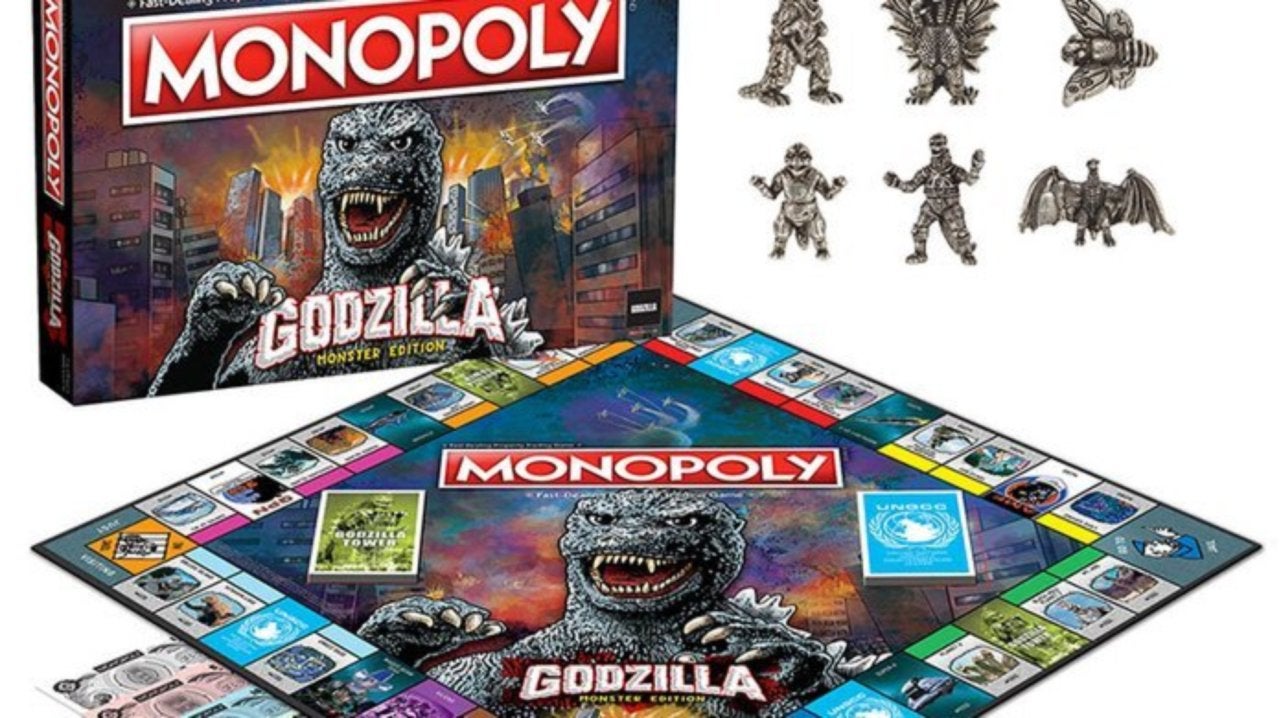 Godzilla Monopoly Has Been Unleashed

Back in February, USAopoly and Toho International revealed that a Godzilla edition of Monopoly [...]

* Don't forget the upcoming movie "Godzilla vs Kong". I wonder about Hasbro's plans for an adaptation of the monsterverse (shouldn't we sai "kaijuverse"?).

Stormonu said:
I ran a Con game with the Tarrasque stomping about Waterdeep’s harbor. Godzilla indeed!
Click to expand...

I would love to see an official adventure for this where Waterdeep takes massive casualties and damage permanently altering the city forever, leaving everyone to pick up the pieces and rebuild.

Back to the OP's actual post (if you really care who wins between the Tarrasque and Godzilla, it doesn't matter)... I doubt we'll actually get a setting book for Ikoria, or Eldraine, at least for a while.

The two Magic Setting books we've gotten so far are Ravnica, and soon Theros. These aren't exactly "old" settings from Magic lore long past, but they're not new either. Both have more than one card set about them, and remain some of the most popular Magic settings on Wizard's Rabiah scale (Ravnica has the best score of 1, and Theros a respectable 3).

Eldraine and Ikoria are both very unique, but they are still way too new. I doubt Wizard's isn't going to take a chance on setting books for them for at least a couple of years, and it will depend if they remain popular or not.

That said, both are likely to get artbooks, meaning you can absolutely expect they'll eventually get Planeshift Articles.

MechaTarrasque said:
I doubt we would see the Big Guy in D&D directly or even indirectly through a Ravinca-style book for Ikoria, but it looks like Godzilla's card will be a special version of "Zilortha, Strength Incarnate", so potentially there could be a thinly-veiled version if Zilortha gets a stat block in a D&D Ikoria book.
Click to expand...

Well the Gargantuans that debuted in the 1st edition AD&D Oriental Adventures are obviously, ahem, "homages" to certain well known Japanese cinema characters. The Reptilian Gargantua is a poor imitation of Big G though. The poor thing doesn't even have a breath weapon!

Oh, and Spelljammer has a blatant imitation of Gamera in it, as well as a bunch of other monsters obviously created by someone who've been watching/reading a lot of Japanese monster media.

Godzilla did the equivalent years earlier in Final Wars when he blew up Gorath (or rather Monster X/a satellite surrounded by a hologram of Gorath).

Oh, and you omitted what I consider his most impressive feat of resilience:
What's that? How can I be be suspected of being a huge Godzilla fan? I don't even have any Godzilla toys, honest.