Chris Cocks, the CEO of Wizards of the Coast, mentioned the possibility of an augmented-reality game for Dungeons & Dragons in 2017. Three years later we're still waiting. But a new advanced in technology offer a tantalizing glimpse of what a D&D augmented-reality game could be using a different franchise: Star Wars. Please note that this review contains spoilers! 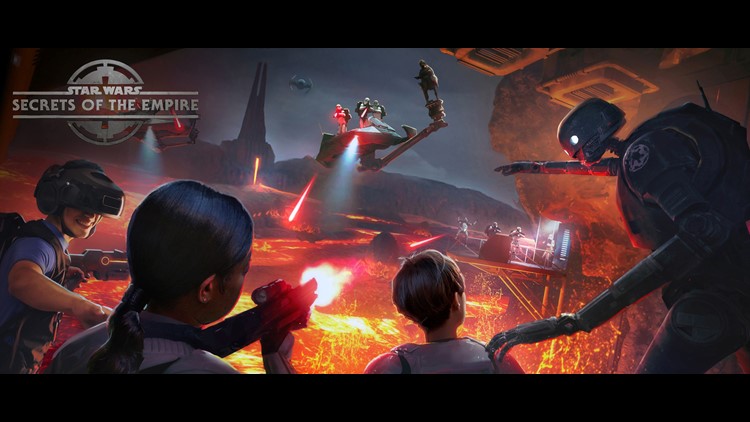 Augmented reality features a digital overlay on the real world. It can range from a third-person perspective where the player uses virtual miniatures on a flat surface--particularly useful to D&D players--to fully inhabiting a virtual body in a simulated world. The augmentation can flow both ways; Skylander has physical pieces that turn into virtual characters in a digital game.

Creating an AR game is not easy. No less than four different miniature/virtual projects have either failed to reach their crowdfunding goals or were eventually shut down. The most recent failure was Augmented Reality & Dragons in 2018, which reached $65,829 of its $250,000 goal.

Similarly, the at-home first-person player experience hyped by the arrival of the Oculus has largely died down. Virtual reality games continue to be developed, but the expectations for profit have been hampered by stark realities of how the games actually work. The headset is tethered to a device; you can’t just walk around your living room without potentially injuring yourself; and stick-related movement can induce nausea as your body gets tricked into thinking it’s moving when it isn’t. The promised experience of a free-ranging virtual overlay hasn’t arrived at homes yet … but with a physical maze and haptics, it’s possible in an arcade setting. Enter VOID.

Diving into the VOID

VOID is the latest attempt at virtual reality gaming as an event--a place you go to, rather than in your home--that was established by the entrepreneurs who launched tabletop game publisher, FASA. Like the BattleTech "Tesla Pods," gamers enter a specific chamber to play in a virtual world, against each other or virtual opponents. The promise of an immersive virtual environment in which a player can play untethered is finally realized in VOID's latest game, Star Wars: Secrets of the Empire.

Secrets of the Empire positions the players as rebels going undercover as Stormtroopers. Their mission, as laid out by Cassian Andor (played by Diego Luna in Rogue One, who reprises his role) is to discover what the Empire is keeping secret on the lava planet Mustafar. After a briefing, our guide explained how the game worked: we would be touching real objects and walking real paths, so we shouldn't try to jump, run, or throw things. We would effectively be blind and deaf, as all we could see or hear was filtered through the virtual reality of our helmets (we could speak to each other this way). We also wore heavy vests--heavy enough that they hung from a chassis and were lowered on to each of us--that would provide haptic input if we were hit by an enemy.

As I've mentioned previously, I've been game mastering the Dawn of Defiance Star Wars campaign converted to Fifth Edition Dungeons & Dragons for the past several years for a group of six players and one adult, my kids included. My son plays a human Jedi and my daughter plays a seven-foot-tall Trandoshan. They are both familiar with the Star Wars universe, and we had only recently visited Galaxy's Edge days before ... including a photo shoot with Darth Vader that really put his physicality in perspective. All of this is important when playing a VR game, because without context some of the nuance of the virtual experience is diluted.

Rogue One felt like a RPG session, and Secrets of the Empire draws on that rich history to continue another mission-based objective. In addition to a clone leader, we're guided by the wisecracking K-2SO from that film (voiced again by Alan Tudyk), the sarcastic, hulking Imperial droid from the film. You don't really appreciate a character's height until all seven-feet-one-inch of him looms over you.

After selecting our appearance, which was limited to different-colored shoulder pads, we were off on our mission. As a necessity in a virtual world, the Stormtrooper armor we all wore was resized to match our actual heights, with my nine-year old daughter being more than a "little short for a Stormtrooper." That didn't stop her from fully participating in the mission as we tried to act casual at an Imperial base surrounded by lava on Mustafar.

VOID uses visual cues to keep players from bumping into walls; you're essentially walking around blind and deaf. Edges that are actual walls in the game were lava, or steep drops, or other obvious obstacles. When we made our way to an arsenal, we picked up blaster props. We could feel the heft and pull the trigger of these weapons. Until your hands are on the blasters, VOID makes its best guess as to where your hands were. This caused some hilarious errors, with our Stormtrooper-gloves occasionally appearing bent at odd angles.

After K-2SO lectured us on acting casual ... my son promptly fired his blaster in the arsenal, triggering an alarm that locked down the room. Stormtroopers began firing on our position while K-2SO began a coded sequence to help us escape that required us to punch a series of colored buttons. These were real buttons that I could feel beneath my fingertips. My son failed this matching game a few times before K-2SO asked "if maybe there was someone else who could handle this" ... and my daughter stepped in to save the day.

Before we entered the game I asked about wearing sweatshirts and our host made a comment that the game "gets warm." I realized he wasn't exaggerating when we made our way "outside" of the arsenal to battle Stormtroopers and lava monsters. The room we entered had fans that blew heated air on us to reinforce that we were on Mustafar. That's also when I discovered that Stormtrooper blasts caused an unpleasant jolt in my vest.

Without spoiling the ending, the game reveals the secret the Empire is keeping that may well have a connection to The Mandalorian.

So Where's Our D&D Game?

Our virtual reality gaming experience was unforgettable, but there are several tricks VOID uses to make Secrets of the Empire seem fluid that won't translate well to other settings.

First and foremost is the fact that the game made us all look the same, in much the same way that the BattleTech games used similar mechs--it keeps things simple, which in turns makes it easier for computer processing to manage. Unless everyone wears a mask and the same armor like a Stormtrooper, the dizzying diversity of D&D customization will be an obstacle.

You could get around this by making a D&D virtual game solo-play only, but that largely defeats the purpose of a game where party interaction is part of the fun. A key part of what made Secrets of the Empire so engaging for us was my son's trigger-happy nature and my daughter's methodical problem-solving.

The second problem is that the game is intentionally constrained to a series of small rooms. There's no roaming around--it is the definition of a "rail shooter" with slightly more player agency in that you can duck and weave. The role-playing implications of virtual reality would prevent a rogue from climbing a wall or tumbling beneath an archway.

The third barrier is the technology itself. The tactile feel of the VR suit fit our role as rebels in Stormtrooper armor. Wizards, barbarians, and rogues may find it difficult to feel nimble in a suit so heavy it requires a personal crane to put on.

All that said, with the right analogues, a fantasy game is certainly possible. Substitute full plate armor for Stormtrooper armor, crossbows for blasters, dragons for lava monsters, and the game could just as easily have taken place in a fantasy realm. But until the technology gets lighter and faster, a D&D virtual reality game seems a few years out.
Last edited: Mar 6, 2020

So where is this and how much does it cost?

Could AR and miniatures be combined? Let's imagine a solo miniature game with an app in the tablet as IA (really only the files of the characters and working like an interactive gamebook). You put your miniatures (painted by you) on the board, and the tablet would say the stats of the all the characters (have I said your PC is a warlord with a couple of monster pets and a little warband?), where is the flying monster and the hidden traps, or the secret doors.

Quartz said:
So where is this and how much does it cost?
Click to expand...

No idea on price but here are the locations

robus said:
No idea on price but here are the locations
Click to expand...

$20 to $40 depending on which experience you do. They have a Jumanji, and Avengers theme one as well (the Avengers one involves Iron Man style armour from what I can tell).

LuisCarlos17f said:
Could AR and miniatures be combined?
Click to expand...

Certainly in theory. It would work best with something like the aborted Google glasses though. Probably a few years off yet.

robus said:
No idea on price but here are the locations
Click to expand...

Oh well, nowhere near me.
B

Europe is left out, sad.
D