Rosie was probably going about her business on D-Day. Where was she and what was she doing when the first gate to hell opened near her? 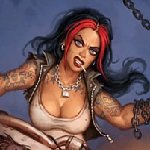 Concept: in d20 Urban Arcana Terms, a tough/smart character with some kind of arcane background; something equivalent to a d20 warlock or sorcerer.

Rosetta "Rosie" Flores is a generally unkempt Latina with red streaks decorating her dark hair. She often (magically) changes the color to reflect her ever-changing moods; she has the Latina fire in her belly and perhaps something more…

Rosie grew up in the streets. Though her family was well-to-do, she was the ninth child in a huge family who didn’t have the space for half of them. She spent her youth as a junker, finding and fixing machines to sell and ‘borrowing’ when necessary.

In her teens, she caught the eye of the Los Brujos motorcycle club – specifically, one of their young initiates. After a brief love affair, she swore to be his Old Lady. One fateful afternoon, local police moved on the Brujo’s clubhouse in order to drive the gang out of town, but their brash leader insisted on holding on to what was ‘theirs’; a gunfight ensued, one where Rosie’s lover fell trying to prevent her from being dragged off. She picked up a shotgun and took down the officer who killed her man.

That moment on, she was good for life with the club. She earned her tattoos, penned with a mystic ink which revealed her latent arcane power.

Everything changed when the Demon nation attacked…

Rosie cackled to herself as the wind whipped through her hair. The high-speed chase around town had been going for miles now; she was sure that the local sheriffs were losing their crap.

And why wouldn't they? It's not like this is the first time that Los Brujos had decided that the small town of Shallow Waters would be their home... And when you're home, you never ask to take things from the fridge, or the cupboards, or the safe. Rosie wanted some new jewelry, maybe something with emeralds, and she was sure Ms. Ledermeyer was going to die soon and pass them off to her daughter, wherever she was... the bitch.

And Rosie was pretty sure that the locals were stiff miffed over that deputy who stuck his nose out just a little too far and took a .22 blast to the face. She stroked the murder weapon lovingly as it rested in its leg scabbard, remembering just how well it meted out justice.

'Let's keep things interesting', she thought, a crooked smile crossing her face. She inhaled slowly, focusing her will and summoning a rush of eldritch energy to her fingertips. With a snap of her wrist, she conjured a violet lash and whipped it into a nearby signpost. With a quick yank, she severed it and sent the stop sign hurtling into the windshield of the police car behind her. The driver reflexively hit his brakes, sending the car into a controlled skid as it swerved...

The explosion happened immediately and without warning, and the next thing Rosie saw in her rear-view was a shimmering portal with a massive, muscular arm jutting out from it. The arm caught, and stopped, the police car dead in its tracks. As the hand withdrew back into the portal, it dragged the car and occupants with it.

So shocked, in fact, that she completely missed the next portal opening directly in front of her...
Last edited by a moderator: Oct 17, 2015

When Rosie took her eyes off her rear-view mirror, she had only time to react and not think.

A fiery ring of flames that was nearly the size of the front of a semi-truck was there blocking her way about 2 feet off the ground. The center of the ring rippled and had a black oily sheen. She could not see through it.

Rosie was too close to go around at her current speed and the flames looked real. Slamming on the breaks to bring her bike to a skid, she ended up dumping it to go into a slide. She had pulled her leg out from underneath and rode the bike as slid along the pavement on its side leaving a trail of sparks and broken metal parts that came off.

Rosie had passed right under the flaming ring and felt the heat.

Her wrecked bike came to rest about 30 feet passed the other side, and the portal looked the same from the back-side as well.

Something came out, flying towards her.

It was no bigger than she was, but it had an 8-foot wingspan. It had red skin and looked to relish the flames around it. Its clawed arms looked to be bathed in fire that did not burn it. Its eyes looked to be smoldering embers and there was a yellow inferno inside its mouth that was visible through sharp teeth.