D&D 5E How do you determine your initial Attributes?

Vaalingrade said:
Please show me the distribution graph then.
Click to expand...

Because, from what I've seen, no one else has done so:

Compare with the distribution of 3d6 and 4d6-L: 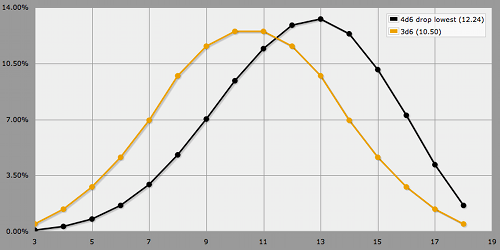 In 1e, general (non-special) NPCs used a version of 3d6, but any 1s were consider 3s, and any 6s were considered 4s. PCs, of course, skewed higher in their attribute scores given the different methods of generation.

Cadence said:
I thought I had remembered something from 1e about that, but was apparently imagining it (or it is hiding).

Supporter
The adjective "average" seems not entirely related to being mathematically average on a single or multiple variables. And the median, trimmed mean, or any number of L, M, Hodges Lehmann, or Bayesian estimators often do a particular job better depending on the modeling assumptions (or lack thereof) available.

Supporter
It has the picture of the distribution and all, but I thought it also relate it to the distribution of ability scores there (and didn't find it - just in the four generation methods).

TwoSix said:
I think it can work in modern games, but doing so feels like an old-school frame of reference.

Most modern games use Playbooks, or something similar to them, which are definitely concept first. Even a modern crunchy game like PF2 only has "choose ability score" as the 5th stop in the character creation process, after concept, ancestry, class, and background.

Even so, ability scores have a large impact (possibly the largest) on the mechanical competence of a character. As long as that's true, it doesn't matter when in the creation process the devs want you to think about them.


Personal experience, the testimony seen in discussion on these boards, and the rules themselves. You may feel free to not find that convincing.


Swarmkeeper said:
(genuinely want to know where this concept is coming from for 5e specifically - or is this a commentary on TTRPGs in general?)
Click to expand...


D&D, all editions. It applies to many other games, but I make no claim of it being general to TTRPGs.

The most simple example of this is the typical wizard's tower, with a door whose lock is a logic puzzle. The player may substitute their own intelligence for their character's, and solve the puzzle without reference to the character's attributes. More subtle is the act of tactical battle planning - where the player may do deep rules-analysis for a character, and come up with optimal battle plans, while playing a character who couldn't reason their way out of a paper bag.

If such stuff doesn't bother you, that's fine. But there's nothing wrong with a group setting some expectations on what kinds of activity is consistent with a given attribute score.

As noted, this also applies on the upper end - players may not be geniuses, but may be playing a high-Int character, and there is nothing wrong with setting expectations for how that can be handled.


Swarmkeeper said:
I mean, it could. For example, the queen may be less likely to take serious someone who trips over her red carpet than someone who does not. Or perhaps she might find such clumsiness endearing. Roleplaying such might even earn said player inspiration in 5e.
Click to expand...


I'm trying to use examples that I expect are common, or broadly applicable. One can always construct a specific hypothetical that seems like it raises a question. However, that amounts to cherry-picking hypotheticals. In practice, the more specific the hypothetical you construct, the less it suggests a need to cover it in Session Zero.


Swarmkeeper said:
And yet the mental skills outnumber the physical skills 14 to 4 when we consider ability checks with proficiency.
Click to expand...


But the actual rules for using them have no tactical depth to speak of.

In many cases, these skills present examples where the player can bypass the mechanics - the old "use fire on trolls" example leaps to mind. The player has read the MM, and knows that trolls are vulnerable to fire. It was never established in the fiction that the character knows this about trolls. The player declares an action specifically attacking a troll with flame, bypassing the Nature check that would commonly be called for.

Micah Sweet said:
Even so, ability scores have a large impact (possibly the largest) on the mechanical competence of a character. As long as that's true, it doesn't matter when in the creation process the devs want you to think about them.
Click to expand...

A bigger difference is whether the game mechanically requires generating random stats.

In lots of D&D, particularly 3e era and on, by the rules you can go either way with a concept before point buy stats or use random stats to generate a concept.

In OD&D where you roll 3d6 once for each stat and that's it, what you roll can determine what options are open to you such as the ranger class with its stat requirements. By the rules you must roll first and work from there.

Similarly in Palladium 1e you pick your race then determine your stats based on race then pick your class. Choice of race determines how many dice you get for different stats and classes have stat prereqs.

Compare with point buy games like GURPS or World of Darkness where there is nothing random required in character creation, concept choices include every aspect of the character including exact stats.

The last time I rolled in a D&Desque game, I was told I had to reduce some of my stats. I don't remember the method, but I had a low stat of 14. This was in front of the GM. My dice just went crazy that day. Doing so well and then being forced to reroll a couple was frustrating. As is rolling a bad set of stats. Or one that just doesn't work for the concept you want. I've seen people come up with ever more complicated ways of rolling, but that gets pretty silly.

Point buy works; people can make the characters they want and nobody has to feel like they missed out from bad rolls. If somebody wants inspiration through rolls, I suggest using a d6 to determine which stat is the highest. Or rolling a set using whatever method and using that as the inspiration for your point buy.

Arrays are good, but I like having a few different arrays to pick from. Some characters cry out for the one big stat, others need a more balanced approach.

Wednesday at 10:01 AM
Neonchameleon
N