How Many Minis Do You Have?

Be honest: right now, how many minis do you have in your possession? Just a raw count of all minis: plastic or pewter, painted or unpainted, used or new, characters or monsters...what's the number?

Asking for a friend.

Tell us all about your collection, too, if you're so inclined. 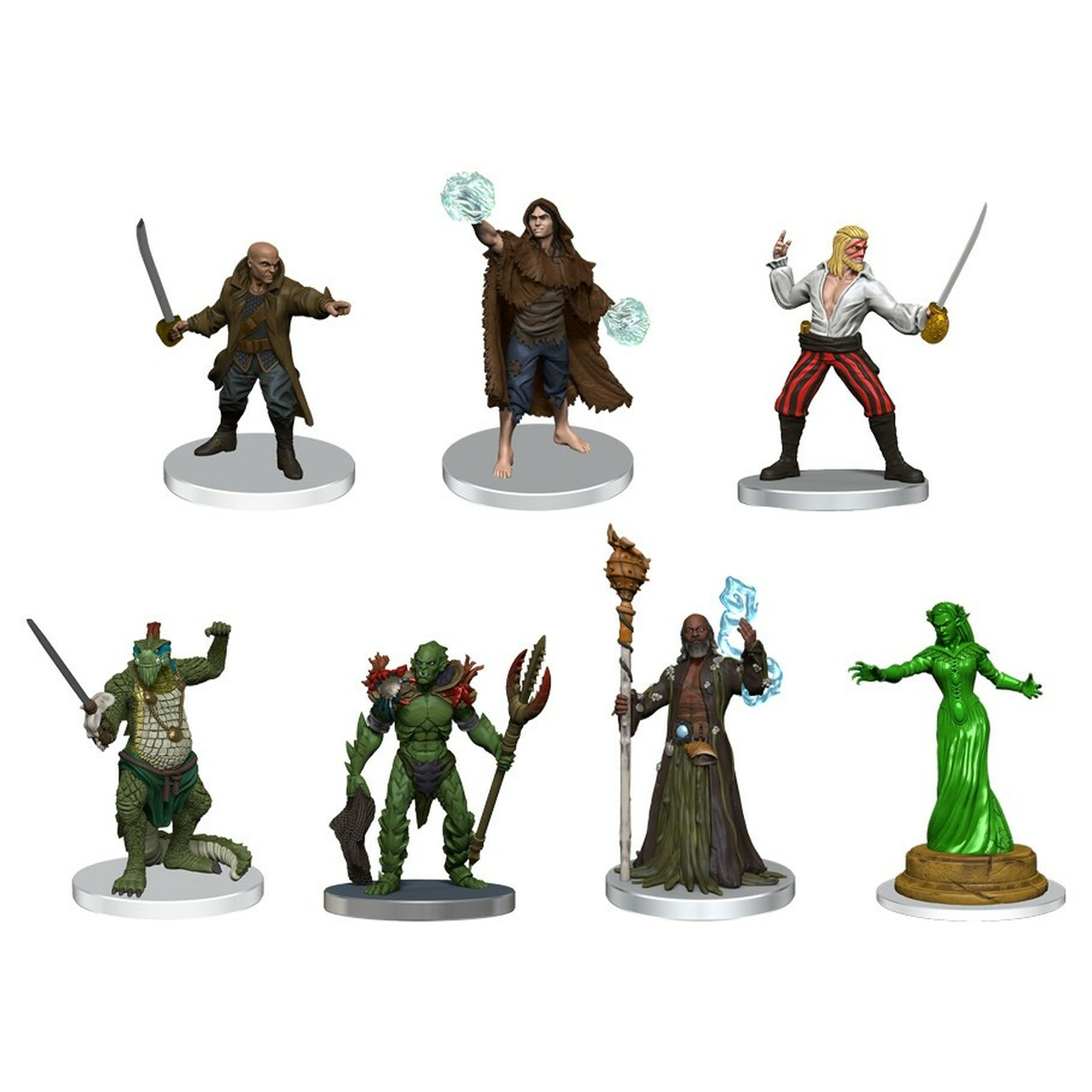 I collected a few dozen character minis over the years, most of them from Reaper, and most of them for the 3.5E campaign I was running in the early-to-mid 2000s. I started using HeroForge to create custom minis as-needed for my players' characters (usually as a gift, at the start of the campaign), but we haven't used it since the pandemic forced us to start playing over VTT.

When I use a battlemat, I don't use minis for monsters. I use cardboard chits, coins, and poker chips to represent the monsters.

I don't actually have a complete count, but it's a lot. When you maintain a Warhammer habit for a couple of decades you tend to wind up with a lot of unbuilt and unpainted stuff in boxes uncatalogued, alongside many hundreds of painted miniatures packed away in cases and army transport boxes for travel to and from tournaments, plus of course some nice painted stuff on display, but I don't even have a count of those right now.

A fully painted Song of Ice and Fire Starks army, and a partially-painted Lannisters army (a hundred or so more models there).

A couple of dozen painted Cryx models for Warmachine, plus a few unpainted.

Dozens of old Ral Partha and Grenadier D&D minis from my adolescence, as well as Battletech 'mechs in both metal and plastic.

Hundreds of Reaper minis; a small percentage in metal (mostly PCs from campaigns over the past twenty or so years), but a lot more from the Bones 1 and 5 Kickstarters.

Plus some other miscellaneous stuff like a 15mm starter Wood Elf army from Mighty Armies, or all the figs that came with games like Massive Darkness, Advanced HeroQuest, Dark Future, and the new HeroQuest remake, which I backed at the Mythic level and so came with around 75 models.

One of the sad things about switching to online D&D during the pandemic has been no longer being able to raid my miniatures for game play, or rummage through the collection to inspire an encounter. I've had some good ones inspired by a favorite mini or set thereof.
Last edited: May 19, 2022

"Minis, 1000s of them", but nothing compared to my GW worker chums who have minis the "like of which God has not seen"

John R Davis said:
"Minis, 1000s of them", but nothing compared to my GW worker chums who have minis the "like of which God has not seen"
Click to expand...

Or for the Tyranid fanatics, "Bugs, Mr. Rico. Zillions of em!"

20-30, I think. I don't use minis in my games, but when I'm playing in a game and the DM/GM uses minis, I like to have a mini for my character and not be stuck using a spare die or rely on the kindness of someone at the table with spares.

I've also taken up painting minis just for the sake of doing so, to get better at it and just have fun. I am, however, fairly slow at it.

Supporter
Way less than I used to, but still a lot. All in service of 40K and other Games Workshop games mind, not TTRPGs at all.

My guess is in the upper end of the 500-1000 range but it could easily be higher. I stopped counting decades ago when it was still in the tens rather than hundreds.

ETA: if you include the hundreds of game pawns, chessmen, and non-"mini" things I use to represent random generic foes then I'm well into the over-1000 category.

Started off collecting those plastic blind booster boxes of D&D minis in the 3.5 era. And then got into Warhammer (Fantasy, 40K, Age of Sigmar) - playing multiple armies. Then there are Kickstarters for big collections. And board games like Descent, Massive Darkness, HeroQuest. And then I got into 3D printing.
I have so many minis - almost all of them fully painted as a major hobby for me.
I am about to start boxing them up and putting them into storage because they are all over the place in my gaming room.

I think it's 2 by now. I gave away all the rest a few years ago (I don't play much at a physical table anymore anyway).

I have no idea.

I never actually counted, not even from the beginning.

I have several boxes of them, and a few boxes of large or gigantic miniatures as well. Probably hundreds...but truthfully...I haven't the faintest.

Enough to be intimidated just by the thought of counting them all to actually know how many there are.

I probably have ~200 random ones left of what was once a collection of Ral Partha, Reaper, WotC 3,x & Star Wars minis which numbered in the 1000's most likely. I ended up selling most of it, needed money, didn't use them and they were a PITA to store and organize and sometimes took forever searching for something particular. Few people I play with still buy them regularly but I just buy one or two here and there for my PCs. I prefer playing TotME these days and dont like the game to tactical where I have to meticulously count squares on a grid, I like using battle mats only for big, important encounters only.

Hundreds of the prepainted ones. A large collection of multiple poses and groups of like creature for gaming: goblins, giants, devils etc.

I started paying Star Wars legion minis and have lots of troops and vehicles.

It’s a second hobby with collecting bigger than painting

I have somewhere between 300-500 miniature sand most of them are painted. I use these for a lot of the games I play/run including D&D, Savage Worlds, Star Wars, and various others. In 2020, I took the plunge and purchased an airbrush. This model below was the very first model I ever airbrushed. 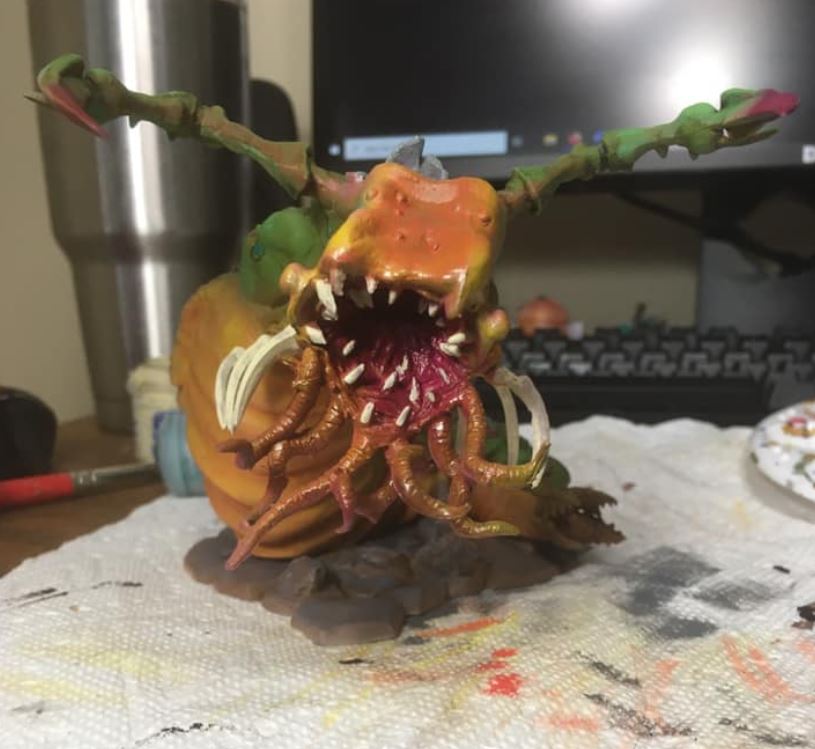 This Cthulhu, also Reaper Bones, is one of my latest projects which I finish last month. 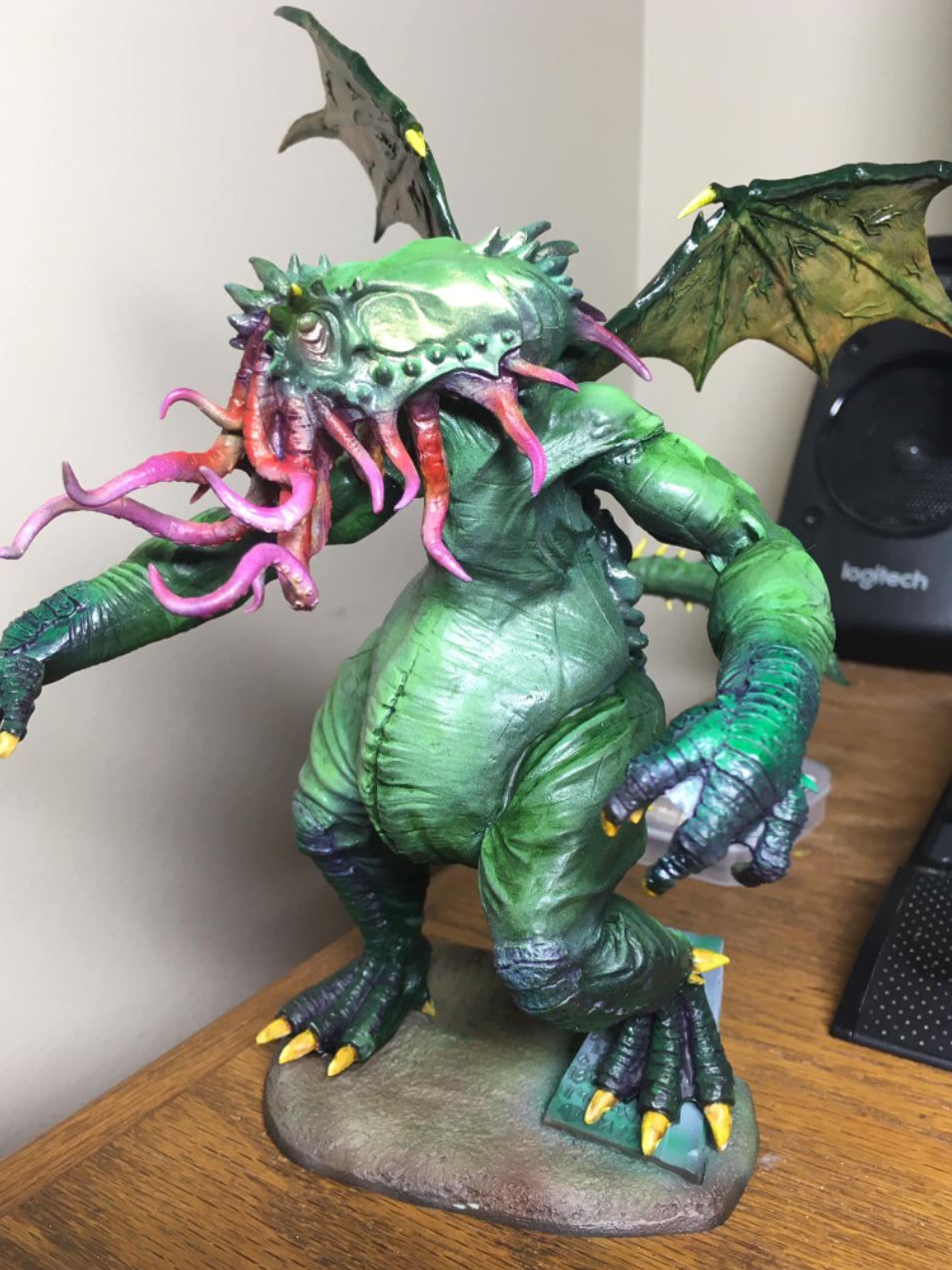 This is a giant from Warhammer Age of Sigmar. No airbrush here, I bought this dude so I could practice my brushwork and skin tones. 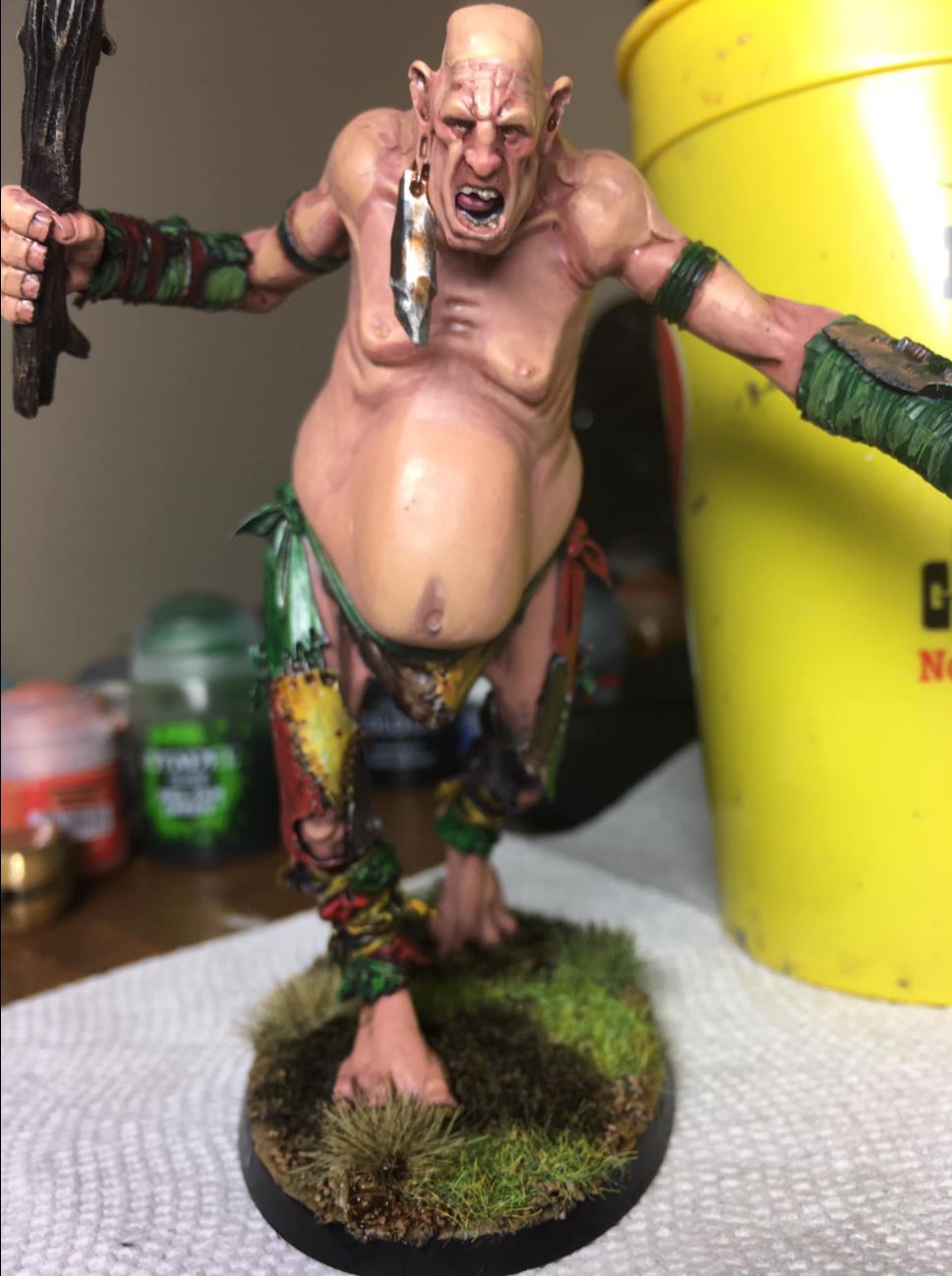 At present I seem to have only a dozen or so. Not sure where all the ones from my teen years went. My brother has most of what we play with in the hundreds and a few binders of cardboard ones. My son has a good collection by now with about 100.

Staff member
I never counted, but 1000+ is the only reasonable estimate I can give, considering the starting date of my collection (sometime in 1977) and the sheer volume they occupy. I have a 6’+ tall tower of Sterlite stackable drawers full of plastic minis from a variety of makers. There’s a couple dozen grey Chessex minis boxes- as I recall, 6 at least for Chainmail minis alone. Then there’s a few tubs full in the attic.

And I’m not counting the Dwarven Forge and other support/setting stuff.

I har a hundred or so, but none are for RPGing. I''ve a couple sets of original Epic Scale Warhammer games, and some space hulk, bloodbowl, and necromunda ones that came in the boxes,

I far prefer pogs or cubes or meeples for RPG use.

I don't know. When I got back into the game I bought a bunch of minis, starting with WizKids prepainted bricks, discount bins at my FLGS, and a Bones Kickstarter. I had good intentions for painting, but didn't have the time to paint more than a few. Then COVID and a new job and travel made me to an online game. So I have hundreds of minis stuffed on shelves and in closets, many of which have not even been unpacked.

But more than minis, I had bought a Silhouette paper cutter and a bunch of slotted bases and created whole armies of color-printed, card stock 2d minis, and backed a kickstarter for plastic 2d minis and slotted based. If I count those, well over two thousand. All packed away for some future date...

Supporter
Speaking of cardstock minis, does anyone have any recommendations for where to get them in bulk? I have a bunch of M&M cardstock minis which is starting to loom large in my what am I running queue.

How do you feel about stretch goals?
2

How Do You Organise Long-haul Campaigns?
2