I Wrote a Book: Familiar Territory

This is a series of posts about taking the plunge into self-publishing on multiple platforms with different media, including books and comics, but it can equally apply to tabletop role-playing games. I published three books in 2010 (The Evolution of Fantasy Role-Playing Games), 2011 (The Well of Stars), and 2012 (Awfully Familiar) and produced a mobile comic (Legends) in 2008. In this article, I relaunch my first fantasy novel in the Furmiliar series, Awfully Furmiliar. You can read the full series here: 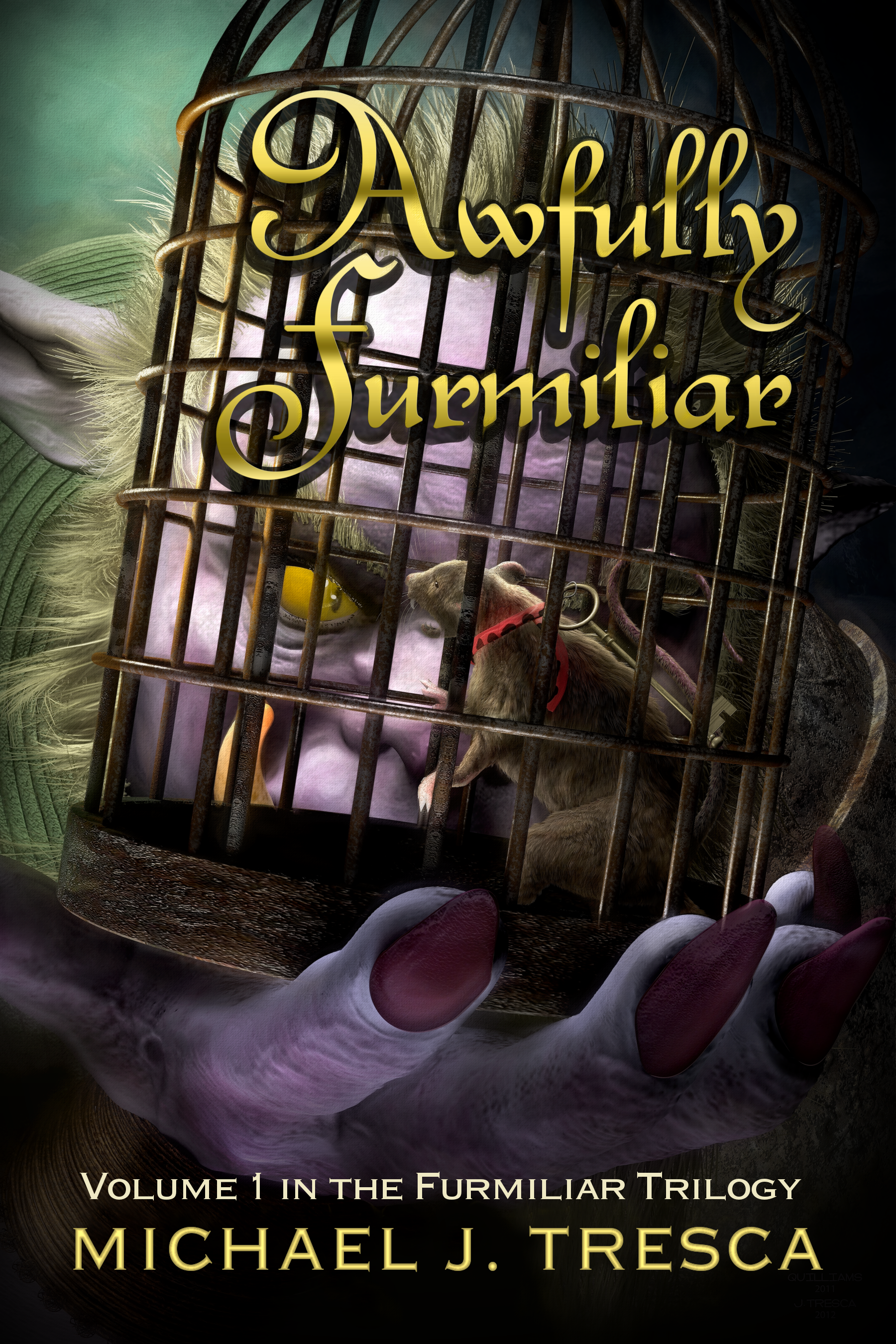 ​
I didn't set out to write a trilogy, but because I set Awfully Familiar and The Well of Stars in the same fantasy setting as my Dungeons & Dragons campaign, the two books work together. Chronologically, Awfully Familiar comes first, so that would be the first book I would launch.

Awfully Familiar was inspired by a seminar run by the legendary game designer and author Mike Stackpole. He told me that young adult books featuring talking animals were currently all the rage, so I decided to give it a try. Here's what the book is all about:

Everyone knows the story of the Pied Piper, but there's more to the story: What happened to the rats? What happened to the children? When a spell goes awry in a rat-baiting competition, scrap discovers he's a little of both. In this whimsical coming of age tale, a running battle between Black's gang of pickpockets and Piper's summoned vermin spills out into the streets of Stromgate. Scrap and his companions must navigate the aristocracy and underworlds of rodent and human alike to solve the mystery of their roots. Along the way he'll make friends of rat and man; survive cats, goblins, ogres, and witches; and if he's smart enough, kind enough, and believes enough, Scrap just might save the kingdom ... and himself.​
​
With a little work, I was convinced I could be more successful with publishing all three titles, beginning with Awfully Familiar. But there were a few challenges I had to overcome first.
[h=3]Nobody Wants a Reprint[/h]The first thing I discovered when I started researching how to pitch my book was that once a book is published, even by a small press publisher, most publishing companies and agents aren't interested. The Martian is a notable exception; but for the most part publishers want to "own" the process from beginning to end. Additionally, publishers aren't interested in purchasing a trilogy outright on an untested author. Given that I published two different books in the same world by two different publishers, pitching the third book in the series was going to be a challenge.

Pitching a book to anyone is an exhaustive, time-consuming process. It's a lot like applying for a job; the gatekeepers (agents/publishers) get thousands of submissions for one open slot, so they throw up walls to intentionally frustrate you. I've already had one agent who burned me when I first started out with "printing fees" that were in fact a scam. I've had other agents I've met face-to-face who simply refused to even consider my book proposal. I'd rather spend those efforts on marketing my book.
[h=3]The SEO Was Terrible[/h]When I came up with the title "Awfully Familiar" I was inspired by Piers Anthony's Xanth series, which were all named after puns. It's the story of a talking rat trying to survive, and his travails as a magical familiar to more powerful beings made him both a "familiar" and, given that he had memories of his past and has some terrifying experiences, "awfully" seemed to fit.

The problem is that "awfully familiar" is a very common phrase and search term. Typing in "awfully familiar" without quotes buries the title; typing it in with quotes only marginally improves my chances of anyone finding it. The first thing I did in rewriting the book was revise the title to "Awfully Furmiliar." The joke still sticks, but there's very few uses of that term, particularly in books -- and that makes it much easier to find with a search. This is called Search Engine Optimization (SEO), and self-publishers live and die by it.
[h=3]I Needed a Cover[/h]Covers are how potential customers find out about your book at a glance. In the electronic world, nobody's (thankfully) looking only at the spine of the book anymore. Conversely, the cover needs to be small enough to be visible and eye-catching enough to make the reader want to click more. I worked with the artist to create the cover and it spoiled me ever after -- most self-published covers are terrible cut-and-paste-jobs.

My brother, who is a graphic artist and game designer, made his own 3D mock-up of the original cover using computer graphics. When it came time to revise the title, I tapped him to update it. This turned a negative into a positive, but it also convinced me that I was going to have to pay to create decent covers in the future. I had several other advantages too.
[h=3]The Book is Already Written[/h]Awfully Familiar was edited, twice, first by the publisher and then by my wife, who is a professional editor. I rewrote the book to clarify more of the world and more concretely tie it into my fantasy campaign, and then my wife edited it again. Additionally, I know the book sells well (for a small publisher anyway) as it has several great reviews on Amazon.

Awfully Familiar was published in 2012. The problem is that, like many small press publishers, DarkQuest Books went out of business and the rights reverted back to me. The book is still sold on Amazon, but I no longer receive royalties so essentially whenever I advertise the book, I'm not reaping the financial benefits of selling it.
[h=3]The Barrier to Entry is Shockingly Low[/h]Kindle Direct Publishing makes it very easy to publish your own book, both in electronic and print format. In fact, the digital version allows me to include drop caps, which wasn't part of the original book. The glossy cover is nearly as good as the original print edition, and the paper quality is comparable. For a print-on-demand book, I'm impressed with the results.

Additionally, Amazon has a wide variety of programs by offering my book exclusively with them. In return for 70% royalties on a $2.99 ebook, I have a much broader reach in 12 different Amazon marketplaces, the option for customers to purchase the ebook along with the print book through Kindle Matchbook for a buck, and it can be lent to family and friends for 14 days. Taking advantage of Amazon's reach is a huge motivator to work exclusively with them.
[h=3]The Price is Right[/h]I mentioned above that I priced the book at $2.99, which is a recommended price for similar books, according to Amazon. I priced the print copy significantly below the standard $14.99 because this is the first in a trilogy, and I want readers to be encouraged to read the next two -- and the price will go up accordingly.

Any book's success depends on reviewers, and I've discovered that the number one way Awfully Familiar got reviews was when it was released for free. People were much more inclined to review it. Amazon offers tools to allow you to offer the book for free for a limited time, so I'll definitely be exploring that option.
[h=3]I Have an Audience and a Platform[/h]It's important to build your audience before you even start selling your book, which means it's important to be well-connected on social media. I'm hardly a social media superstar but I'm well-acquainted with the major platforms and have a presence on most of them. I have my own Facebook page (270 followers), Twitter feed (1,000+ followers), and LinkedIn presence (10,000+ connections). I use all of them to advertise my other content.

It's also worth mentioning that I have a Patreon with several loyal patrons. I will release the book to them for free, but they can also help spread the word about the book, including reviewing it.

The best part about this exercise is that the book will never go out of stock. It will generate revenues for me in perpetuity, and if I find a major error I can update it with relative ease. This first book was as much a learning experience as it was an investment. You can view Awfully Furmiliar here.

With all these lessons under my belt, I was ready to take on the next book, The Well of Stars. Unlike Awfully Familiar, it was going to need a lot more work. We'll discuss that in my next article.
Last edited: Oct 5, 2019
Click to expand...

I had a book published around 2005-ish by a traditional publisher, because e-books hadn't quite reached legitimacy at the time and I found a company that was branching out into a new fantasy line and liked my work. It's been out of print for a while and the rights reverted to me, so I went through the e-book publishing process a few years ago. (No following, no advertising, no built-in audience, and I really haven't participated much in the online communities it would appeal to. I just wanted it to still be accessible.)

I'm drawing a blank on the specific name of the program on Amazon, but is your book enrolled in the one where Prime members can read it for free as part of their membership and you get a share of a pool of money derived from Prime membership fees based on how many pages have been read? I avoided that because a) I really dislike the exclusive-to-Amazon clause, even if they are , and b) I correctly predicted that the money allocated to that pool would start high and gradually drop.

I do wonder, though, if I'm still losing out by not enrolling in it. Who knows, maybe the $4-5 a month I make from it on average across all platforms could grow to $7 or so a month!

drl2 said:
I'm drawing a blank on the specific name of the program on Amazon, but is your book enrolled in the one where Prime members can read it for free as part of their membership and you get a share of a pool of money derived from Prime membership fees based on how many pages have been read?
Click to expand...

I think it's called Kindle Match?


To your point, the value of launching the book on Amazon is the long tail of sales. That is, I want it to exist so I can refer to it and those interested can buy it. Me making any sale at all is 100% more than my non-existent publisher who isn't giving me any royalties. In essence, I'm squeezing some value out of something I produced.


Where the math gets stickier is when you start investing money in it. The average # of books sold in total over its lifespan is 250, so that's a useful measure of how much it's worth investing in a book. I paid to create a map of my world and invested in two other book covers (my brother already created the first volume's cover for free).


What this means, if you're focused on long-tail sales, is distribution means more than anything else. So yeah, I think Match is worth it because I'm more concerned about the book being "seen" than it making a huge amount of money.