I Wrote a Book: World-Building for RPGs and Novels

This is the last article in a series of posts about taking the plunge into self-publishing on multiple platforms with different media, including books and comics, but it can equally apply to tabletop role-playing games. I published three books in 2010 (The Evolution of Fantasy Role-Playing Games), 2011 (The Well of Stars), and 2012 (Awfully Familiar) and produced a mobile comic (Legends) in 2008. In this article, I wrap up the Furmiliar series with the final book in the trilogy, Unfurmiliar.
You can read the full series here: 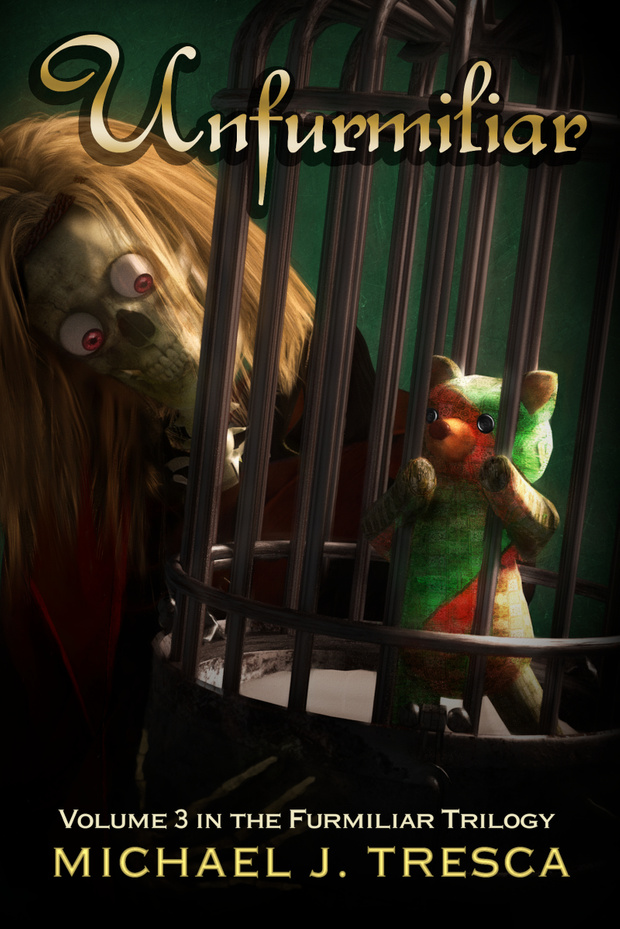 Unlike Awfully Furmiliar (a new version of Awfully Familiar), and the additional work on Slightly Furmiliar (a rewrite of The Well of Stars), Unfurmiliar is a new book. But it's entirely connected to the trilogy -- it doesn't stand on its own -- so that makes it a tough sell. I mentioned earlier why this is, and it essentially amounts to publishers wanting to own the potential franchise opportunities of a book series. Unfortunately this also means no publisher is likely interested in publishing it, which is why I decided to publish the whole series on Amazon in the first place. But to get it published, it would take a few changes to make it publishable.

A Mix-Up
I decided in this novel to wrap things up by returning to the stories featuring the original five player characters from my Dungeons & Dragons campaign. It's all started with me promising to write finale stories for each of the characters. The D&D campaign ended with them defeating the Darklord, but what happened to those Five Heroes? How did they finally die and what legacy did they leave? I set wrote a series of short stories detailing their epilogues and shopped them around for years with no success. These stories constitute the third narrative layer.

Then I decided to publish them as a group with a narrative framing device in the form of Gwen Usher, the daughter of the protagonists from Slightly Furmiliar. Gwen has the ability to see in the past, so through her adventures she witnesses each of the short stories in real time. When her father Deren is kidnapped, she has to go on a series of quests to activate five Teleportals, towers that provide instant teleportation between them. But the only way to find her father is to find each Hero's Soul Key -- an object of great significance to that hero in life. Gwen slowly discovers each hero's Soul Key. Gwen's adventures are detailed in the second narrative layer.

The third narrative layer involves a battle of wits between a gargoyle and our protagonist, a stuffed animal. There are hints about the origins of each of the narrators in the second narrative -- each witnesses different chapters in a variety of ways -- and it's all told in first-person. It's a complex novel as a result that requires some commitment on behalf of the reader with three different narrative levels to work though. Following the theme of a small familiar stuck in a cage, I went with the most eye-popping (pun intended!) yet: a lich holding a stuffed animal in a cage. I think Cherie Fox did an excellent job.

In writing these three narratives, Unfurmiliar gave me an opportunity to set the record straight on what happened to the heroes of my D&D campaign, but also to flesh out each world as it is, years later, when Gwen discovers it. She meets the children of the heroes (herself, a child of a failed-and-later-redeemed hero) and we get to view what happened in the third narrative through another lens. But I had an ulterior motive for my role-playing campaign as well.

Updating a World
Welstar has always been my default role-playing game universe but the fiction was chronologically way behind. With the conclusion of the trilogy it skips ahead ten years and brings events up to date. Those events were inspired by my magic school-inspired campaign I ran for my kids, in which they were students participating in intra- and inter-wizard rivalries between German-style Drakungheist and Roman-style Venefigrex. That campaign helped me "live" in the fantasy setting of the two schools for a year, which in turn made it much easier to write about the professors who work there.

The effort to make a role-playing game setting has parallels in a novel's world-building. After gaming in this universe for four decades I have plenty of material to work with; conversely, it was surprising to discover how many world-building questions I hadn't answered. I hadn't pinned down the different language dialects (and their real-world equivalents to make it easy for creating names on the fly), nor had I standardized currencies for each region. Working on the aforementioned map meant making some hard choices about geography that I hadn't considered as a game master.

Because Unfurmiliar deals with the afterlife, I was also forced to address Welstar's patched-together cosmology. I codified it into a trinity of deities (known as the Holy Triune) and had to further flesh out what heaven and hell looked like since demons and angels were involved. This work culminated in a supplement, 5E Heaven & Hell.
With the completion of Unfurmiliar, I firmly established the past and present of Welstar: its territories, its people, and its history.

The Power of Three
There's something to be said for selling a trilogy. Readers know that the author can commit to the world and that they'll be spending some time there. Trilogies are also an opportunity to garner interest in older titles; where one book might not stand on its own, readers may be more tempted to buy them in bulk. This has been true so far of my DriveThruRPG monster supplements and I hope it will apply to the novels as well.

The best part of working on this novel was how much material it provided for role-playing games. I now have a map of the world, a cosmology, and even a glossary of terms I can refer to for new players. Unfurmiliar sets up a magic school (Zaubereich) and several locations that range far afield of the usual medieval setting. I'm probably going to take a break from writing fiction for a bit while I concentrate on other media (narrative podcast, more monster compilations), but when I'm ready to return to running D&D, I've got plenty to work with.

Mike "Talien" Tresca is a freelance game columnist, author, communicator, and a participant in the Amazon Services LLC Associates Program, an affiliate advertising program designed to provide a means for sites to earn advertising fees by advertising and linking to http://amazon.com. If you like what we do here at EN World (the Forums, Columns, News, etc.) and would like to help support us to bring you MORE please consider supporting our Patreon. Even a single dollar helps!
Share:
Facebook Twitter Reddit Pinterest Tumblr WhatsApp Email Share Link