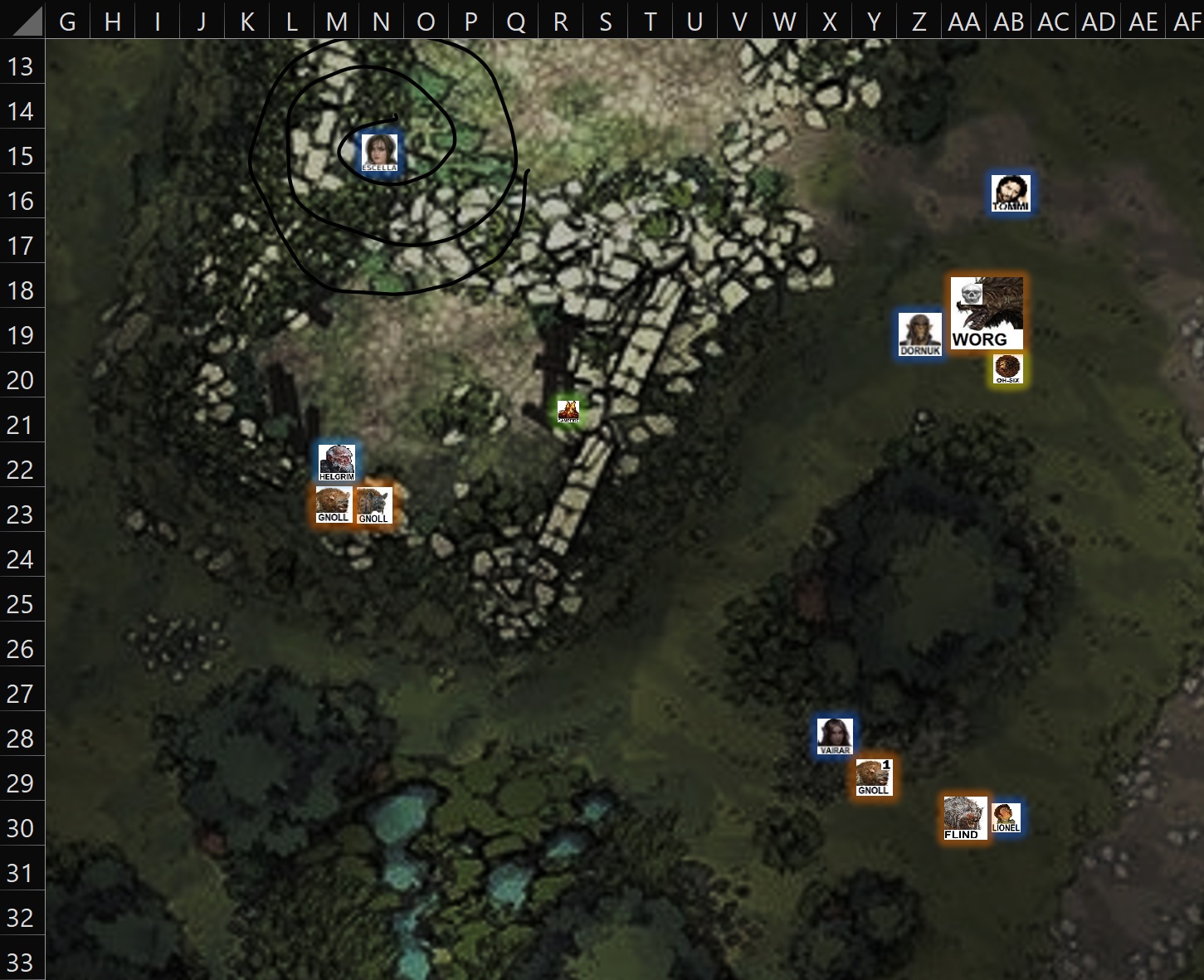 Agreeing with Vairar, Escella curses them for leaving the shelter. There could have been a dozen archers out there or multiple worgs and flinds. She shakes her head as she sends two blasts at the gnolls on Helgrim. The one barely holding on by a thread dodges the blast somehow. The other one dies as the blast rips into it.

"Focus on the others, lass!" Helgrim scolds as one of the gnolls in front of him gets ripped apart by Escella's magic, the old warrior not willing to admit out loud she did a fine job. Crushing the remaining gnolls skull with his hammer, the dwarf does not wait for it to drop to the ground before sprinting towards where he saw the flind cross the river.

Escella dropped one of the gnolls towering over Helgrim, and the old dwarf took out the other. Clambering over the old foundation, the dwarf set out at a run as fast as his short legs could go, heading to help Lionel against the largest, scariest of their opponents. He didn't get far.

Lionel had dropped his crossbow. No, you can do this! he told himself. You know where to strike. Lionel managed to convince himself that this was just a big bad dog and nothing to fear as he drew his sword. Just put it in its place.
Lionel waited for the moment the flind swung his flail behind it and then sliced the big bad dog in the leg. The flind did not seem to notice the cut and kept swinging and setting up a devastating blow. Lionel feinted left and right, and then turned and ran towards Dornuk and Tommi.

Lionel stabbed the big gnoll, ducked, and ran. The flind ran after him, swinging its flail overhead and howling like mad laughter. It slammed the spikey heads into Lionel's back, and the halfling rolled forward, lessening the impact. Even still, his back stung painfully from the blow.

Supporter
Tommi doubles back to where Lionel is, and launches the remaining stone at the massive jackal creature. His sling is twisted, though, and he is unable to load it properly and the stone drops to the ground uselessly.

Lunn's inner fire is still raging, his axe translucent blur as it swishes around basically without weight leaving a twinkling trail of unfortunate cleaved air particles.

He rushes at the demon-thing and carves two deep slashes into it.

Vairar smiles grimly at the gnoll.
"Do you know about catch 22?" he asks in common before mouthing a short prayer
Striking the gnoll with a solid hit, its fur stands on its end as lightning plays over it and slight shimmer can be seen around it.
"My goddess will punish you for attacking me. And for running away. Drop your weapons!"
He repeats it in orcish, just in case

If it moves: 5 more lightning damage
If it doesn't disengage: 5 more from OA
If it attacks it takes 14 damage (Dex save for half) lightning damage and is pushed 10' away (to prevent the second attack if any, no save)

In any combination it takes at minimum 18 damage (if it saves or disengages) or dies
Last edited: May 10, 2022

The Flind began to laugh as Lunn hacked into it, a strange barking sound. The laughter was echoed by the other gnoll, with a red madness in its eyes. Suddenly, the gnoll's head lunged at Vairar, all teeth, and it bit at the elf's scarred face, before being blown back by wind and crackling lightning.

Tommi dropped his stone, but Oh-Six shone a light on where it went, and the lad was able to grab it, place it in his sling, and make a quick throw as the orb buzzed around the laughing monster's head. The stone struck the Flind in the throat, and the laughter choked silent. The creature staggered coughing, and Lunn struck off its head with his axe. 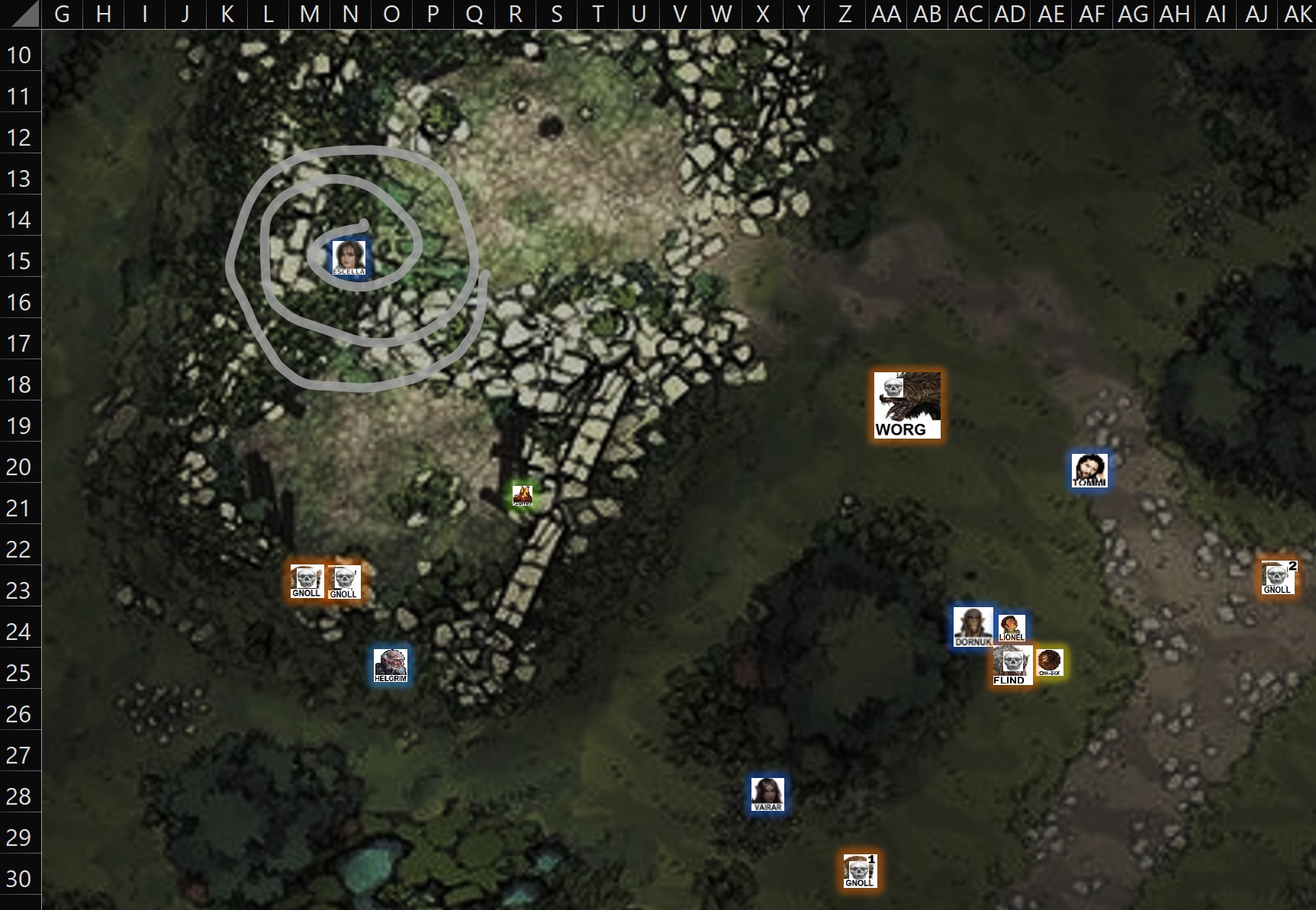 Supporter
Tommi sits on the ground.

He is hurt, and it's not for a good reason, and he's embarrassed and angry at himself. He's sure he'll be fine by morning if he gets a good night's sleep, but doesn't want to let the others know he's as hurt as he is.

"I'll take the first watch, he says. "You should all rest."

A cool, damp dawn came to the Daggerfordians camped at the ruins of Nandar Lodge. In spite of the trouble the night before, the old lodge's foundation made for a surprisingly comfortable campsite, and despite a few aching bound recent wounds, they were ready to face their next challenge.

Tommi wakes and feels better. He looks at the gnoll corpses in the morning light, making the rounds, as it were. Ensuring they were dead, and recalling their horrific cackle.