Vairar sets his spear to receive any charge toward his martial companions. Talking might delay them a couple of breaths, but he doubts it. These creatures' blood is already boiling with bloodlust from the torture of the prisoners and the owlbear.

Tommi and Lionel crept over to the prisoners, staying hidden in the underbrush from the gnolls, who sounded like they'd been alerted to the others' presence. Tommi whispered in the prisoner's ear and the man moaned and rolled his eyes, near senseless, but with perhaps a small bit of hope.

Suddenly, the vulture hopped from one branch to another, and there was no way for Tommi and Lionel to remain hidden from it. It began to shriek, and Oh-Six buzzed into the branches and tried to silence it with a zap of lightning. The vulture dodged, and in a burst of wings, blue lightning, and feathers, the two moved off in an aerial battle, with the vulture pecking at the orb with a noisy ping pang sound.

A gnoll near the back of the pack seemed to take notice, and it wandered, without hurry, toward the prisoners. It was holding a flail in one hand, and a spiked staff in the other, and its eyes glowed with demonic fire as it peered into the unnatural gloom under the trees, while occasionally glancing up at the aerial combatants.

Vairar and Lunn burst out of the fog behind Helgrim. A gnoll howled and rushed toward him, swinging hand axes in either hand. Viarar lunged at him with his spear, but the gnoll caught it in the hook of his axe and yanked it aside, then hacked into Vairar's arm. The elf's vambraces saved his arm, but the blow stung.

Two more gnolls pulled their longbows and lobbed arrows over their companions. One struck and flipped off Vairar's shield, but the other struck Hellgim in the neck. It was painful, and made it hard for him to speak as he tasted blood. Helgrim wondered if he would survive removing it later, but for now, he left it there and kept fighting.

One gnoll remained near the owlbear, and attempted to make sure that the beast would not escape while they dealt with the intruders. 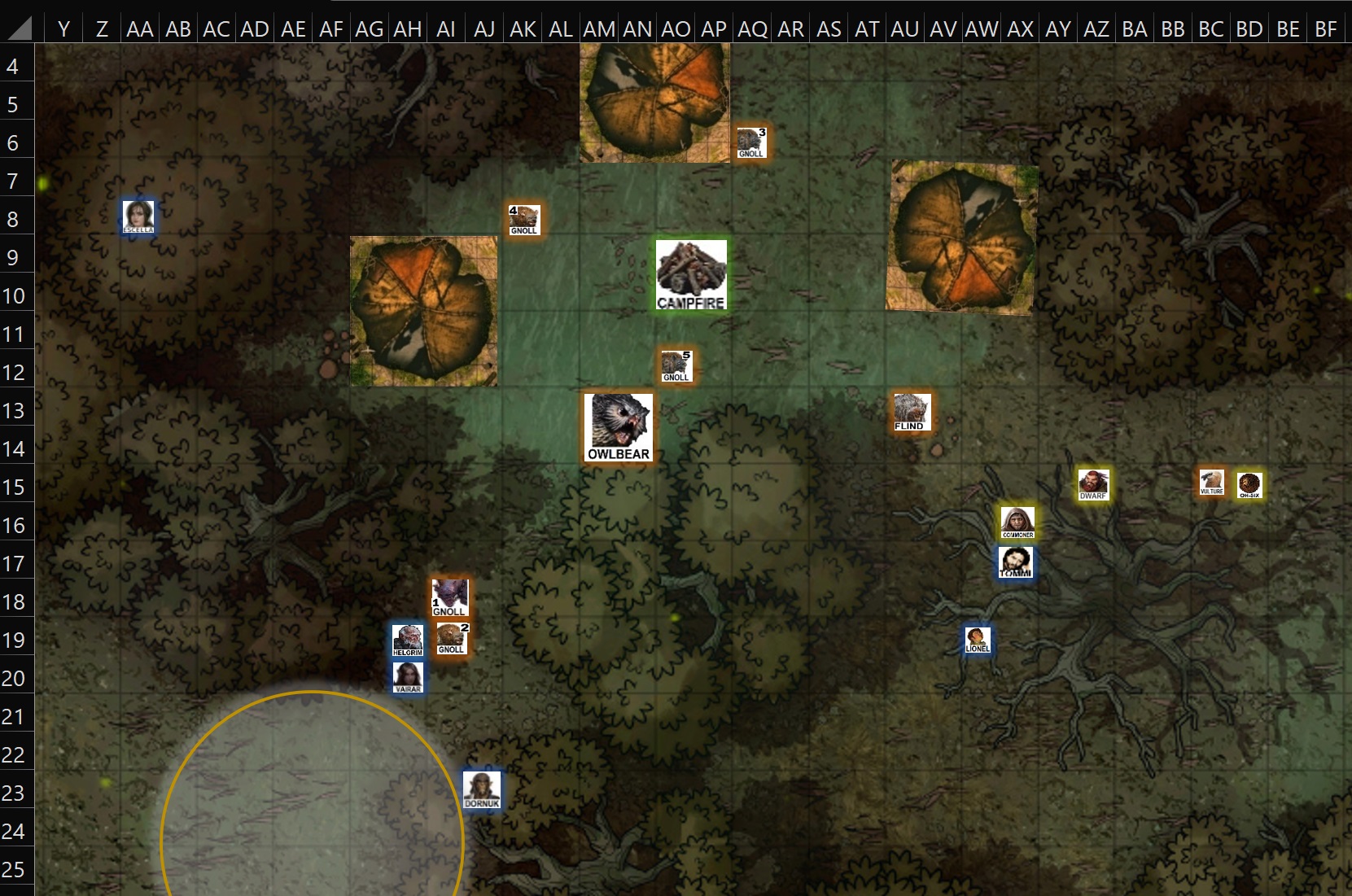 Escella sends two eldritch blasts at Gnoll4 (with advantage) because of stealth. He drops. Only Gnoll3 can see her afterward. She then moves and bonus action moves, half speed, behind the big tent, leaving the view of Gnoll3, down to AF11. Where she hides again behind the tent, unseen by the gnolls still in the camp (full cover). Gnoll1 and Gnoll2 are fully aware of where she is. Though they are busy.

Helgrim spits blood from his mouth and grins wickedly. Perhaps this is the day he finds his warrior's death? But he will not go down easily!

With a move practised for centuries, the old dwarf raises his shield, draws his warhammer and uses the momentum to reach over his shield with the dangerous weapon. It hits the surprised gnoll in front of him on the head hard, and Helgrim allows the hammer to swing sideways and into the creature's gut.

Now both he and the gnoll are bleeding.

The ancient warrior tries to curse as he sees the one who put the arrow in his neck fall from Escella's magical onslaught, but all that comes out of his mouth is a bloody gurgle.

Lionel couldn't signal to Tommi for fear of the gnoll spotting them. Instead, he took aim and let the quarrel loose. Tommi would surely follow suit.
The quarrel hit the target and Lionel scurried quietly a few steps to the left in the undergrowth and tried to hide again behind some bushes before the gnoll spotted him.

Oh-Six flies away from the vulture in a low, straight beeline toward the approaching Flind. Inside the little dynamo, a belt spins quckly producing a high pitched whirrrrrr that resonates as it speeds towards the foe.

Lionel's quarrel goes off, and Tommi whips a stone a fraction of a moment later, to coincide with whatever distraction
Oh-Six provides.

It occurred to Tommi that he didn't know what a "flind" was, beyond the stories of bigger, meaner, more demonic gnolls. Was this a flind? He didn't really know. What he did know was that it was an odd-looking gnoll, with glowing eyes, a dyed mohawk-mane, and a crazed, snarling mouth.

Lionel shot the thing first, and then disappeared into the underbrush behind Tommi. Oh-Six buzzed away from the vulture and flew down to distract the flind (or whatever it was) while Tommi sent a stone that struck it in the muzzle, breaking a tooth.

The gnoll-flind shook its head, laughing maniacally, and swung its gnarled staff in circles. Suddenly the vulture began to smoke, twist, and grow. It looked terribly pained, and Tommi thought for a moment that the gnoll had confused it for something on their side - attacked it with a harmful spell. But then the vulture split into two, and then two again. Four man-sized vultures remained, twisted by the gnoll's magic. They dove through the tree, breaking through branches as they came right for him.

To make matters worse, the two vultures so crowded him, that the third couldn't wait its turn. Instead, it turned its beak on the nearby prisoner, and disemboweled the poor fellow, pecking away in glorious gore. The fourth chose to swoop right, and dove on Oh-six, who had to create a little force field to stop from being torn apart. Even with the field, the beak went through, and Oh-six had a piece of chassis bent outward, marring the otherwise near-perfect sphere.

Lionel watched from under a bush in terror and concern for his friend and horror and regret at what had happened to the prisoner.

Lunn shouts at the gnolls and suddenly flickers in a burst of magic and appears right next to both gnolls. Slashing wildly, he drops the gnoll already cut by Helgrim and slashes into the other gnoll threatening the old dwarf.

He moves to block the easy access to their priest.

You teleport up to 30 feet to an unoccupied space you can see. Until your rage ends, you can use this effect again on each of your turns as a bonus action.
Teleport to AK18

Escella shot one of the gnoll archers down with her eldritch bolts and took sanctuary behind one of the tents.

Helgrim was badly injured, but the old dwarf had seen worse times than this. He hammered a gnoll as Lunn appeared from nowhere and cut that gnoll down from behind. Turning on the larger gnoll, Lunn also took a hail of arrows, blocking them with his shield, as he stood in front of both the dwarf and the scarred elf cleric.

The big gnoll with a great axe slammed his axe down hard on Lunn's shield, but the half-orc furiously held his stance. 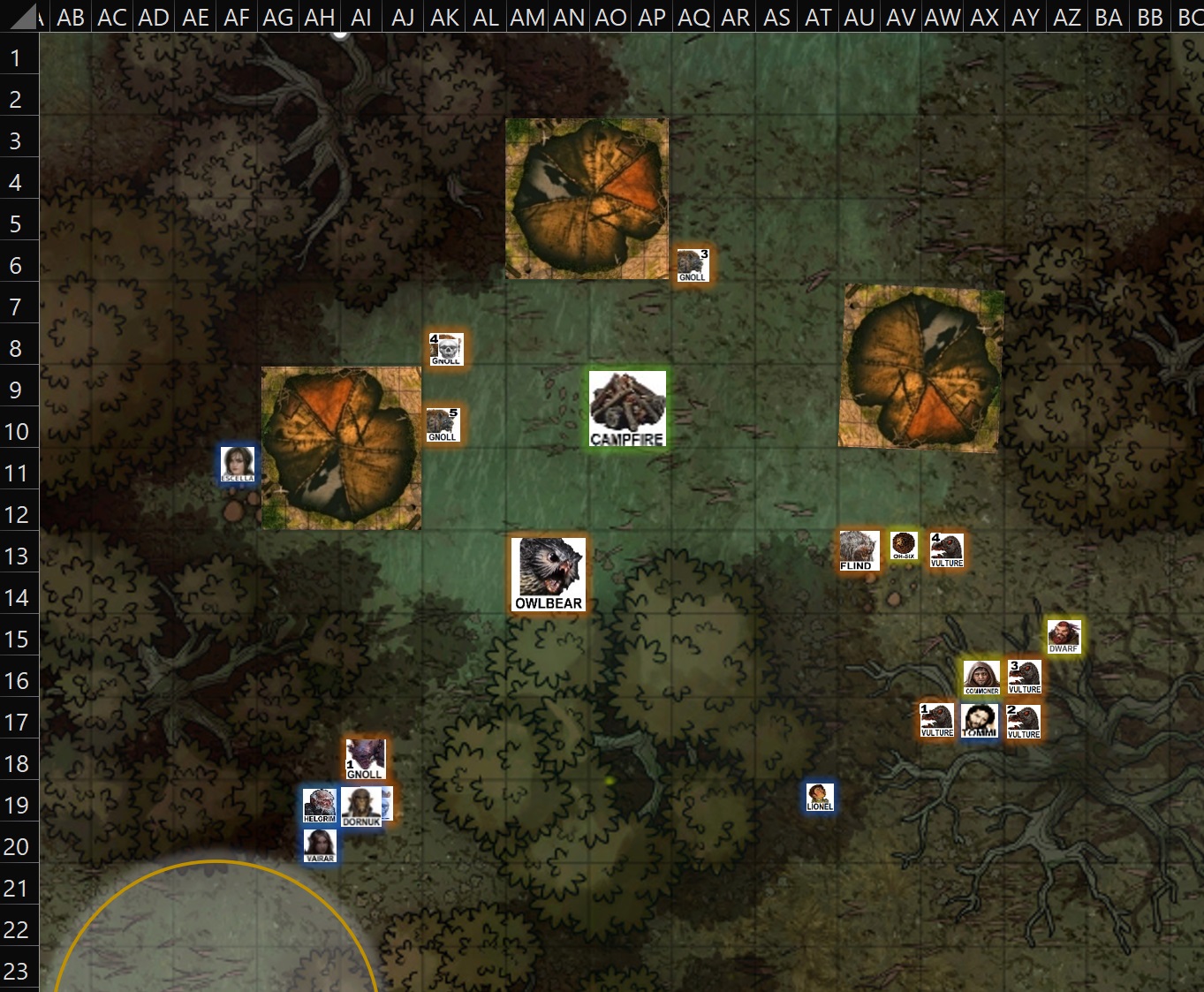 Tommi moves south to disengage safely form the flock of carrion-birds that had just appeared. Dodging their beaks and their massive wingspans, the young man extricates himself and moves closer to Lionel. With an underhand swing, he launches one of his stones towards the gnoll caster.

As he does so, despite still being harried by the original bird, Oh-Six is right in amongst the foul creature, flashing and whirring and causing a distraction.

The stone pelted the beast, but it remained standing. "Oh Six, watch out!" Tommi called.

Lionel takes the opportunity to shoot that strange gnoll who summoned a bunch of birds out of nowhere. The quarrel flies true and the gnoll drops dead.
Next he moves up to Tommi and managed to find a really good hiding spot where he reloads the crossbow. Still he keeps one hand on the hilt of the shortsword in case he will need it quickly.

Reaction: Uncanny dodge, if required on the first attack.

"Helgrim, not your time yet! Hold on!" the word of encouragement from the elf carries the magic of the fey and the wound Helgrim took stops bleeding.

Vairar stabs from behind the front wall into the gnoll, sheating it in thunderous energy, just waiting for the gnoll to breach its confines.

(round 2)
Taking a deep breath, Vairar considers the combat. On one hand, if he kills the gnoll in front of them, he may give Helgrim some breathing room. On the other, casting more powerful healing spell can prevent the dwarf from going down in the first place.

Deciding for the moment that the group has the upper hand, he stabs Shatterpike upward, piercing the gnolls neck, just above the armor line and stabbing deep into its brain.

"Helgim, come to me, you need healing. And let's avoid owlbear for the moment."

The fog behind him dissipates as he ceases concentrating.


OOC: apologies for the slow response, thank you for the option for two rounds.
Also, no stats for the owlbear? Is it restrained somehow? Would shatter spell help?

The shaman raised his staff to cast some horrible spell, and Tommi and Lionel sent stone and quarrel to bring him down. The red-eyed gnoll fell, and the vultures that were picking at the prisoner's corpse disappeared in a burst of blood and feathers. The original vulture was left, as Oh-six buzzed away, alone and confused. It began to flee from the scene, flying off over the forest.

Lionel and Tommi caught each other's eye, and hunkered down in the underbrush.

Escella pokes her head around the north side of the tent (move to AF9) and launches blasts at the gnoll (3) hiding behind the far tent. She then moves directly west (to AA9) into the brush and then loops back to end up at AD17 taking cover behind the tree trunk.