In the '70s and early '80s the United States military used a system of infrared beams called the MILES system. The beams would hit sensors on a chest set of units and start beeping. This would cause the hit soldier to know they took a deadly strike. Training with these systems was an effective way for troops to learn combat situations. 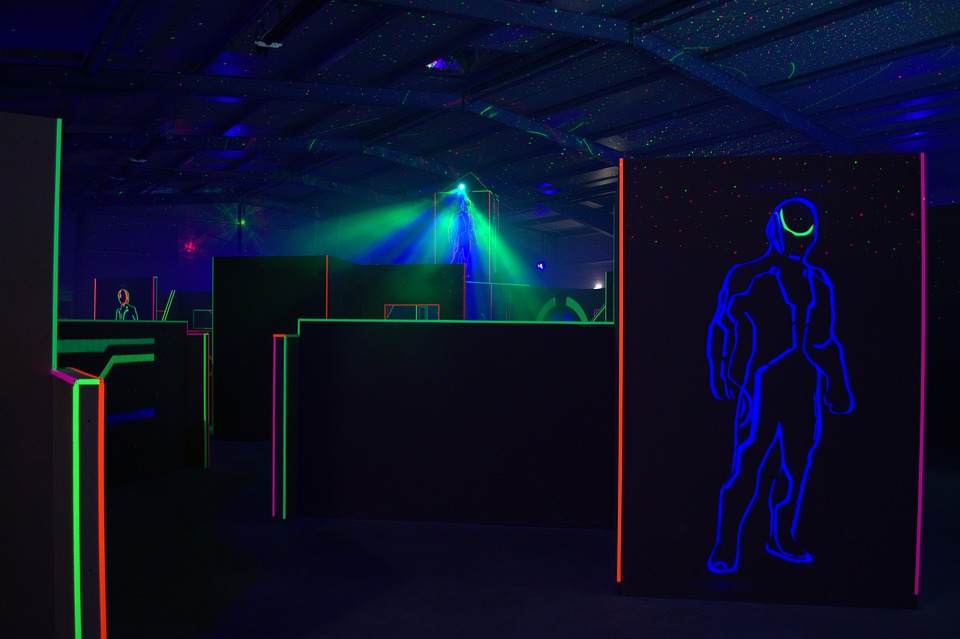 The first infrared light toy came out in about 1979 as a Star Trek Phaser.

Several companies including Worlds of Wonder came up with toy systems that did the same thing. TSR saw the success of Worlds of Wonder; the company was also famous for Teddy Ruxpin, and TSR applied for and got the Laser Tag license.

I got the plumb job of working on the game book. Being only human and still a kid at heart, I hit Worlds of Wonder up for a set of everything so that we could play test the games. The equipment arrived in three huge boxes and the design department shut down for the rest of the afternoon.

The Laser Tag system included lots of pistols, a batch of hats with the light sensors attached to the front, vests with the light sensors, and we got four prototype Laser Tag rifles. It was a lot like Christmas at TSR as we opened all of the things up. We discovered right away that all of the hats and vests were very small. They had been made for Japanese-sized players. We communicated that to Worlds of Wonder and they were amazed at our findings. We spent about a zillion dollars in batteries for everything and the fun began.

I have to tell you a little bit about TSR. The building started out life as a Q-tip factory. There was a very large warehouse area with specially made racks four levels tall. Connected to that building were offices and a large mail-order unit with all of TSR's many products for sale. Connected to that was what we called cube land. There were two levels of these cube offices. Each one was about 12 feet long by 8 feet wide with a computer and shelving. At the south end of cube land were the areas for typesetting and the artists. On an entire other level were the offices for the vice presidents and the book department offices. There was a large parking lot and a sort of garden on the west end of the building.

Over night the TSR building turned into a playground for the designers and editors tasked with play testing the Laser Tag games I came up with for the first booklet. Naturally, upper management complained about the designers and editors doing gaming instead of writing products. I logically pointed out that to make sure the games rules did the job we would have to test each game at least twice. I was getting a lot of argument from the bosses until I pointed out that any game where the rules weren't clear would irritate Worlds of Wonder. That got me permission to use the office staff.

The warehouse was the perfect place to have long range battles between two teams. I'm proud to say the foolish red team never thought to look up two levels as I shot them all away while they looked at ground level for me.

Play testing went on for quite a bit. We practiced fast draws and all of the younger designers and editors easily out drew the older ones. Then I had the misfortune to become a game maneuver. The game was simple. In the garden two teams faced off against each other at 50 yards. This was longer than the range of the pistol beam. Each side would take turns charging the other side. I have always been a bit beefy. Quickly, the strategy of “following the fat man” allowed players to survive longer as they could get down the field behind cover. I didn't like being that cover.

I came to find out TSR designers and editors are amazing cheaters. Michael Dobson, the man who invented the “follow the fat man strategy” was great at breaking the rules. During one game he kept putting his whole arm in front of his chest sensor so that we weren't getting strikes at him. When people complained, he asked, “Is there a rule against it?” Although I couldn't argue with that, the next day there was a rule against that with a nasty penalty. We learned how to angle our hats so there were fewer strikes. That got a rule. Then there were all the block the sensor strategies. A player would position themselves so that their sensor was behind a pillar or some other stationary object. That way they could fire all day long and not have sensor lights wink out. That got a rule as well.

We learned the fun of roaming cube land without any lights on. Unfortunately, the building supervisor put a stop to that.

The first rule book sold great and we sold out of the 30,000 unit printing. The second book didn't do as well. Part of the reason for that is what killed the Worlds of Wonder Laser Tag line. Far cheaper knock offs were swarming the toy stores. Lots of cheaper game books were also for sale. While they weren't nearly as good as my work (patting myself on the back) they were lots cheaper.

The games we had the most fun play testing were always the “last light” games. In all of those games we would trip all the sensors but one on our vests or hats. In this way one shot would take the player out. Those games would slow down to a crawl as no one wanted to advance on the objective. We had a lot of fun with hat and vest games. In most of those the hat was turned on and the vest was turned off. The players had to get to a distant objective and slap the pillar. This allowed them to turn on their vests to get lots more lights before they were out of the game.
Last edited by a moderator: Sep 18, 2019
Click to expand...

I remember playing Laser Tag games when I was a kid, along with other takes on the fad such as Captain Power and the Soldiers of the Future. But I only recently found out about TSR's two Laser Tag rulebooks. In a fit of nostalgia, I picked them both up for cheap and in good condition over on Paizo's website.

Ah, Laser Tag. That was one of the things that revealed that I needed glasses.

Love this, had that very book and used it -- we were dedicated Laser Tag players with hats, pistols, rifles, and vests. Our games in the nearby woods were epic, thank you Jim for the memories!

I remember the MILES gear in the Army. We broke-cheat that as well looking for ways that meant you weren't killed. That is, until once we were in Arkansas freezing out butts off and the killed people got to return to the base for hot food. Everyone died that day.

Publisher
We still used that crappy MILES gear up until the late 90s. It was worthless, and hardly ever worked.

Funny. I think I'm playing laser tag on Saturday being roped in to be Uncle Z for my niece's birthday.

I absolutely loved the Worlds of Wonder Lazer Tag! (The WoW brand used a "Z" to distinguish itself.) I managed to eventually get one of the big white Starlyte rifles that had been returned to the store for really cheap. Whoever designed those things did an excellent job, they looked better than most movie props.

As usual, fun story. Love the continued insights into TSR. Also, like others mentioned above I had a lot of experience with the crappy MILES equipment too. Buggy and easy to cheat with, that's a fact.

Sacrosanct said:
We still used that crappy MILES gear up until the late 90s. It was worthless, and hardly ever worked.
Click to expand...

I know it still saw at least limited use as late as 2010.

When I did my Basic Combat Training in the US Army in early 2010, we used MILES gear for the tactical part of the final field exercise.

The equipment was clearly well worn and a little glitchy and past-its-prime, but it was still seeing use in training.

By the time I got out in 2016, all the tactical training was using paintball instead of lasers.