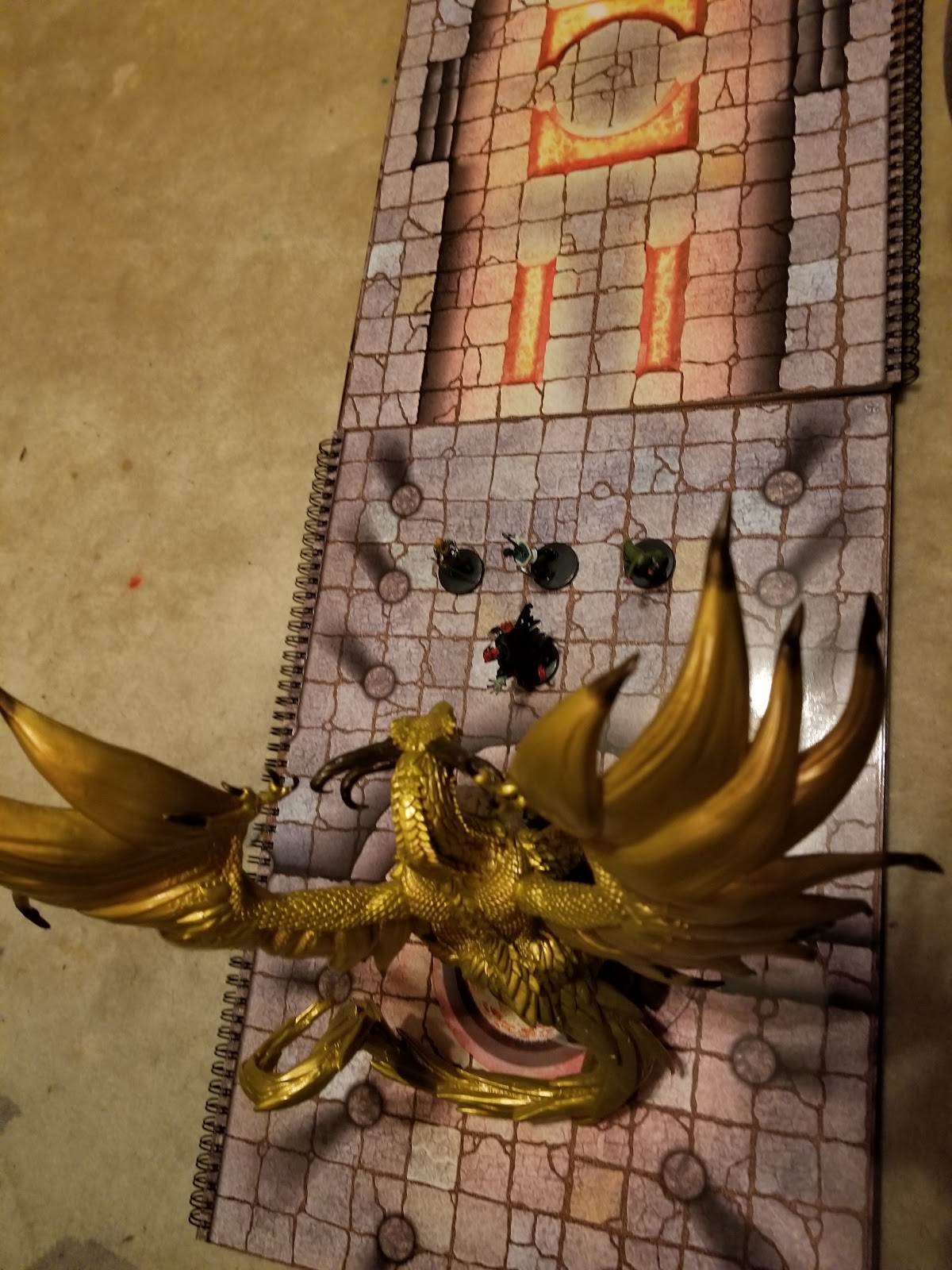 When the time for combat comes in an RPG the Game Master must decide whether they want to run it using the theater of the mind or on the table with a map or battle grid. While I usually use the former option, there’s something to be said for the latter. I’ve come to enjoy a good set piece battle every now and again with the wide variety of flip-mats, battlemats, tiles and other accessories made available to gaming groups these days. A good battle map inspires Dungeon Masters into plotting out interesting combats with bad guys taking advantage of the terrain. They also inspire players by using things on the grid in unusual ways beyond just grinding down the main bad guy.

Loke Battlemats sent along a sampler of their products for me to check out. I like collecting these sorts of products to have on hand when I need a “standing set” for an upcoming battle. Are they worth picking up when in-person gaming becomes safe again?

The Big Book of Battle Mats Volume II are spiral bound books that come in Big (12” x 9”) and Giant (12” x 16”) sizes. Each book in the series features a map on one page with two themed maps on every full spread. The pages are laminated to allow for wet and dry erase markers to be used during battles. The binding allows the book to lay flat, which allows for an expanded map across two pages that can be initially laid out or revealed should the melee spill into the area. Maps are built with a central entrance and exit to allow maps from different books a way to easily connect with other books. 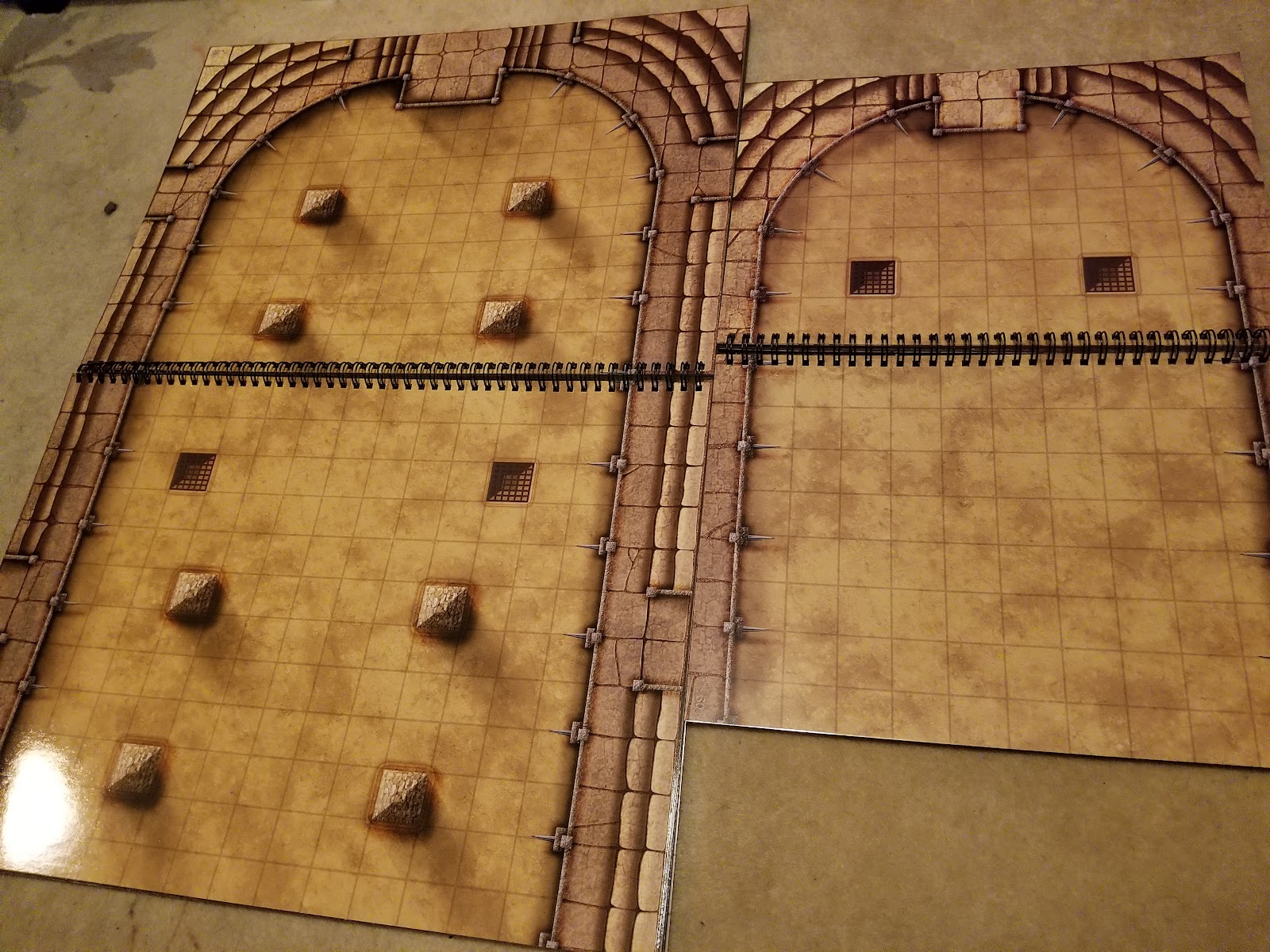 The other main format of the battlemat books are spiral bound 24”x24” books that look a little like a double album from your parent’s basement. They share the same laminate coating and feel a little sturdier while at the same time just as transportable as the Big books for Dungeon Masters who run away games. I got advanced copies of their Towns & Taverns series in this format.

This set was my favorite out of the Loke Battlemats that I own. The square maps felt much more versatile and customizable. They hit the right spot between a big set piece on their own and being able to be plugged together for a bigger experience. Even using the same map with different pages could change the feel from a cozy bar where plans for plotting against a lich are whispered to a gigantic rollicking inn just aching for a big old tavern brawl. 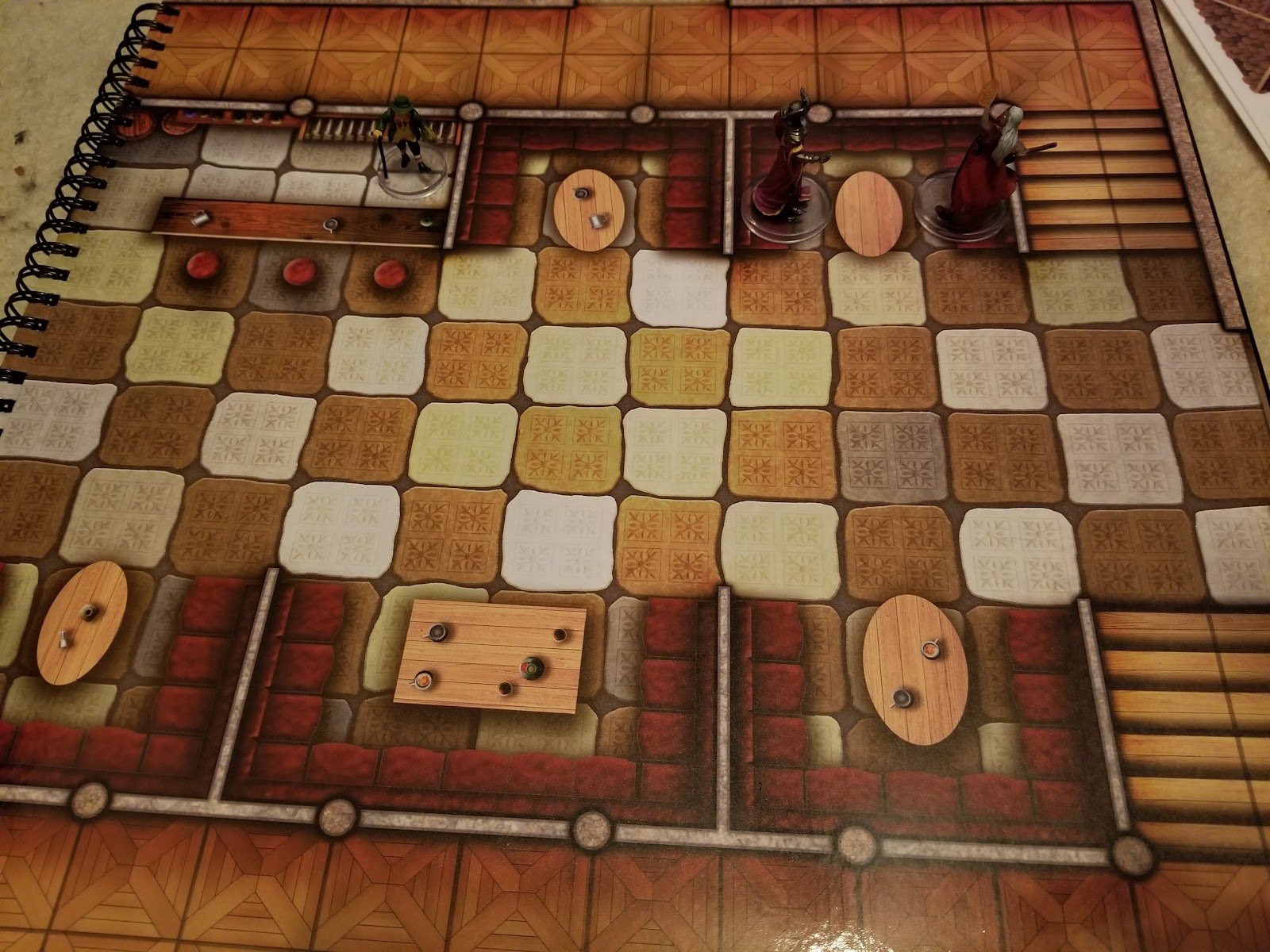 Futures Dark And Far Away​ 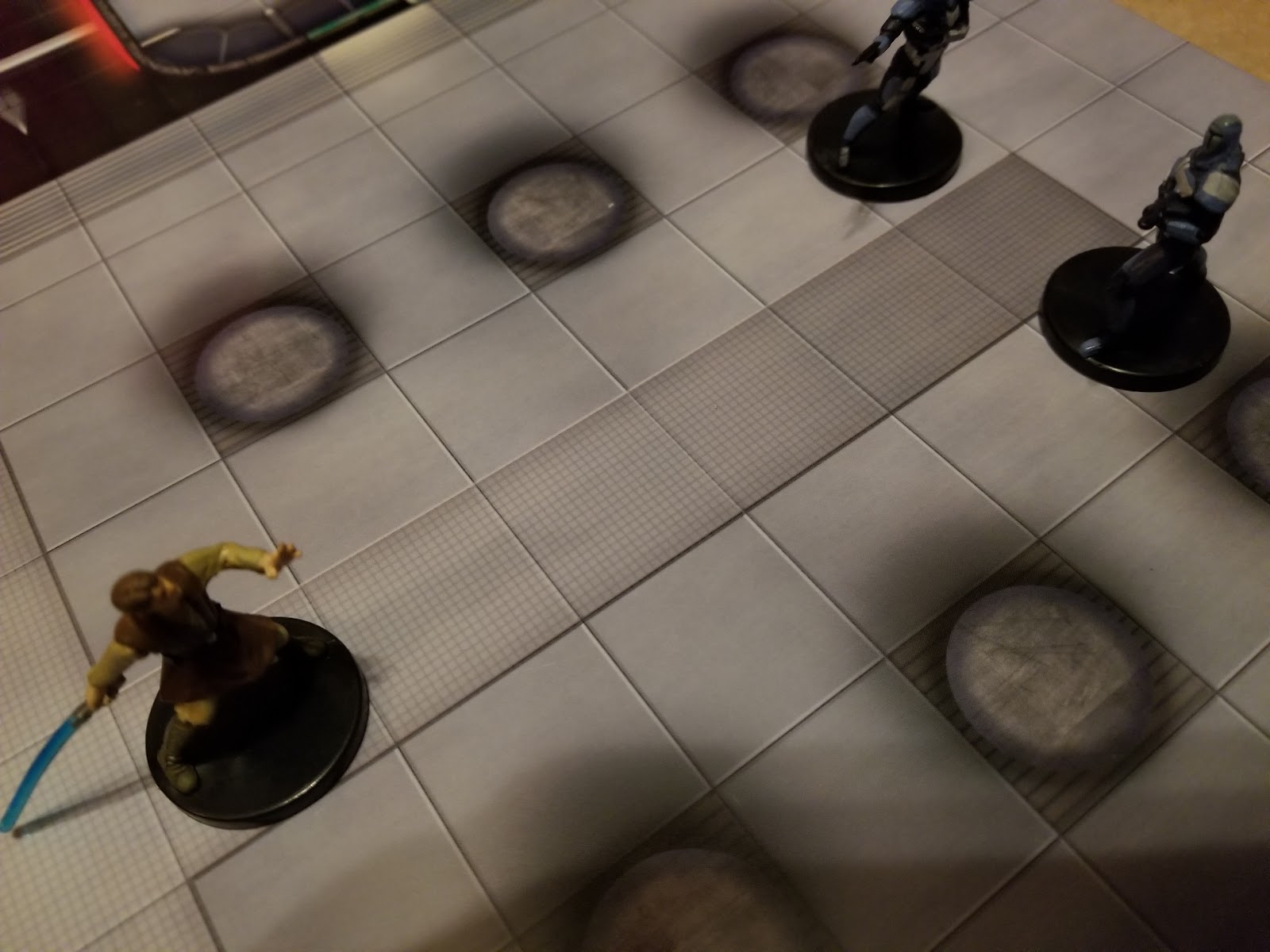 The company has also expanded into other genres. Most battlemats are for fantasy gaming, leaving players of science fiction games scrounging for grid options. The Giant Book of Sci-Fi Battle Mats (and its little Big brother) offer plenty of loading bays, spaceports and other locations for your rebels to battle against evil space empires. The company also offers cyberpunk options for tables that want to throw down with themed street gangs in their favorite dark future worlds with or without magic mixed in. 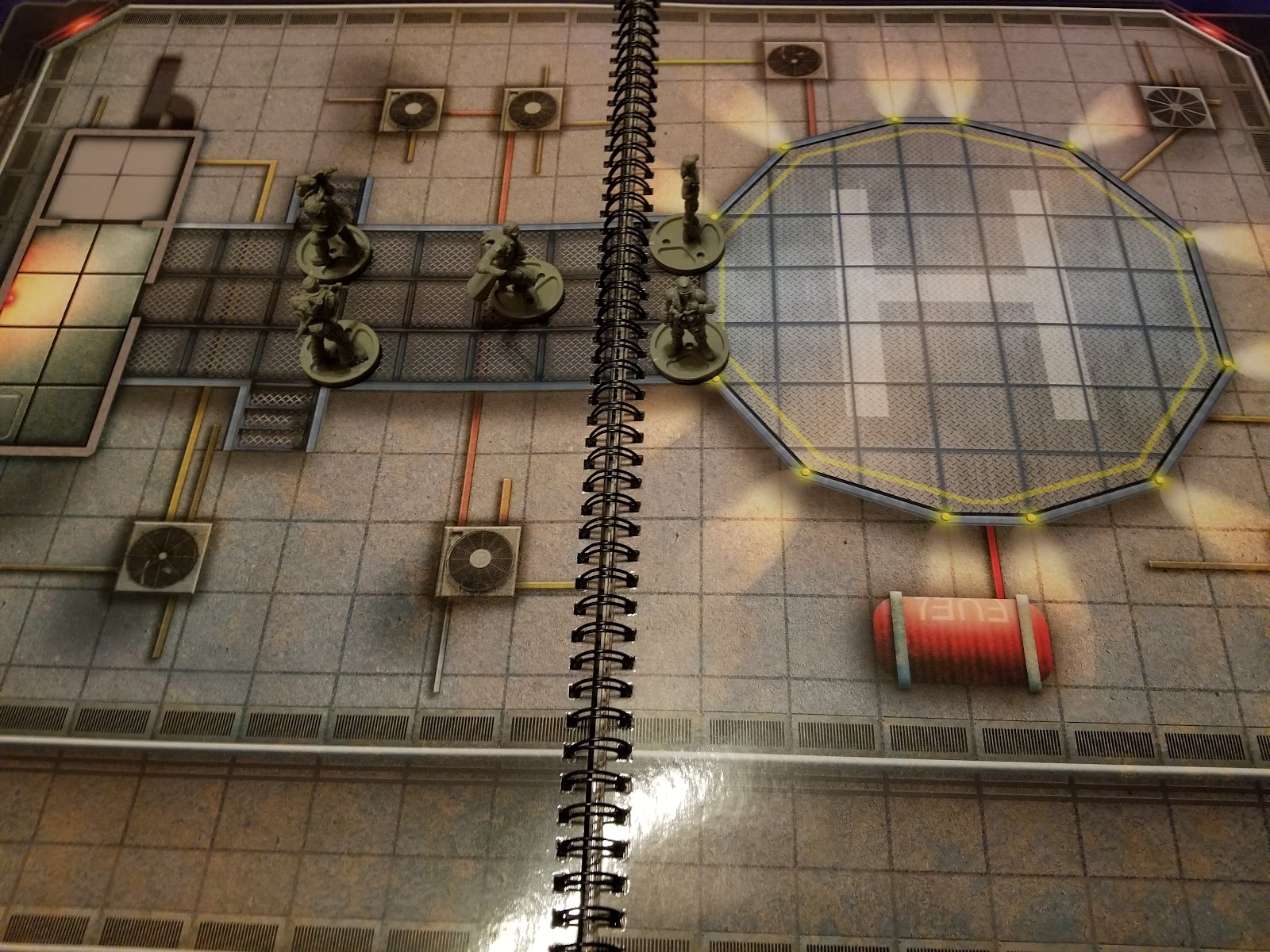 I’m glad to see options for multiple genres, but the futuristic mats highlighted my main criticism across all the Loke Battlemats I checked out for this review. The external maps are great but the interior ones feel a bit empty. Other battle maps of taverns and marketplaces have food on the tables and piles of gold scattered through different corners. One of the things I love as a Dungeon Master is watching a player squint at the map and then on their turn pick up one of the objects shown and use it in an unusual way. I still much prefer using a pre-built map to forcing players to decode my dry-erase chicken scratch, but it’s something I hope the company considers for their next series of maps. 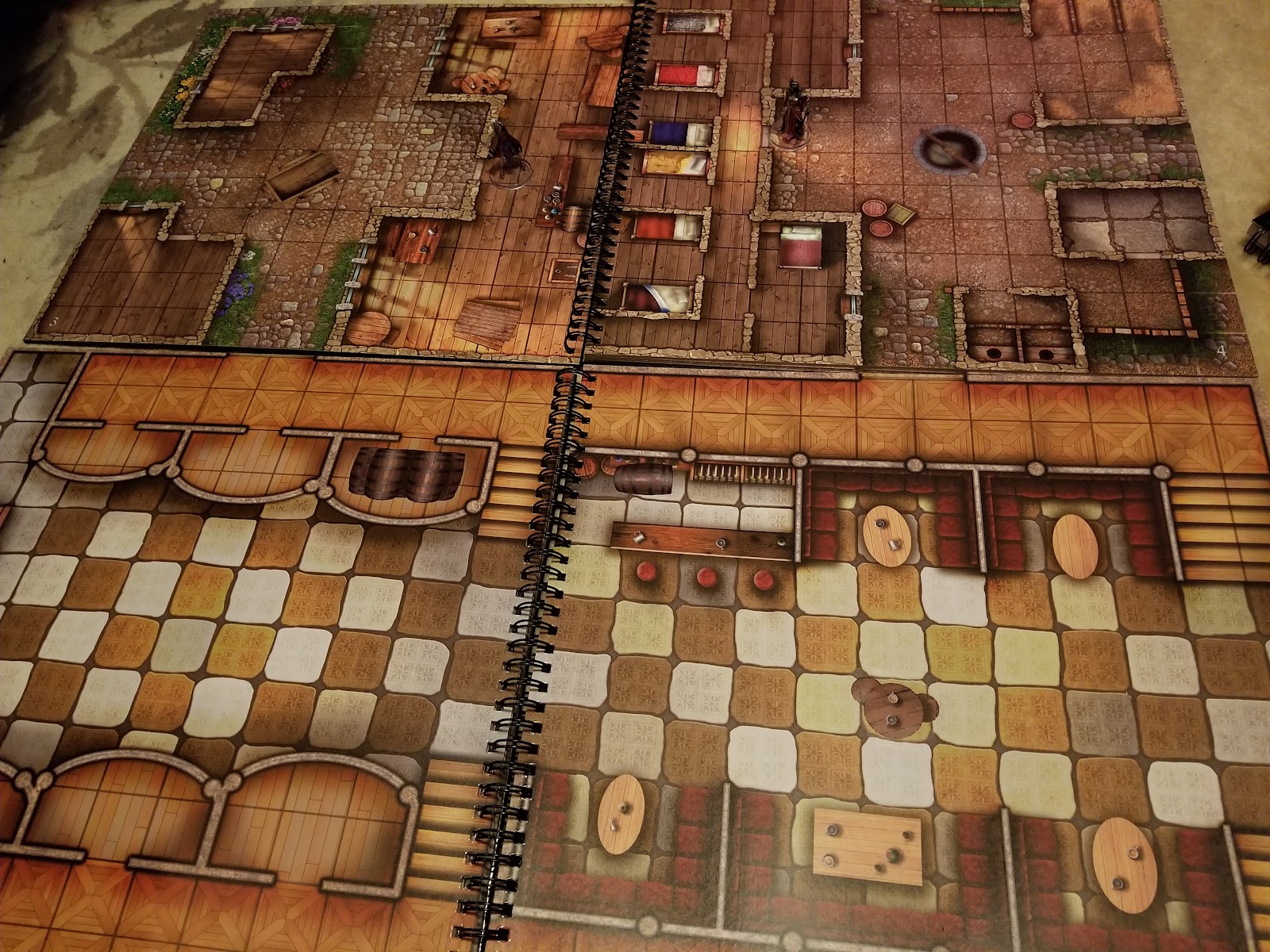 In the meantime, they’ve offered an interesting stop gap. Add-on sets like Town Trimmings full of tables, chairs and other set decoration. These sets are vinyl stickers that peel off, stick to the pages, and then stick elsewhere. Peeling and storing the stickers can be a bit of a hassle, but I ended up tucking them into the pages of the books as a decent solution. They can turn an empty road into a street market in a few minutes and offer a nice visual moment when a player pushes a cart and it actually moves rather than having a marker arrow drawn to indicate the player’s action. It also triggered a sense memory of playing with Colorforms as a kid and gave me a bit of joy realizing I still get to do that with friends and family. 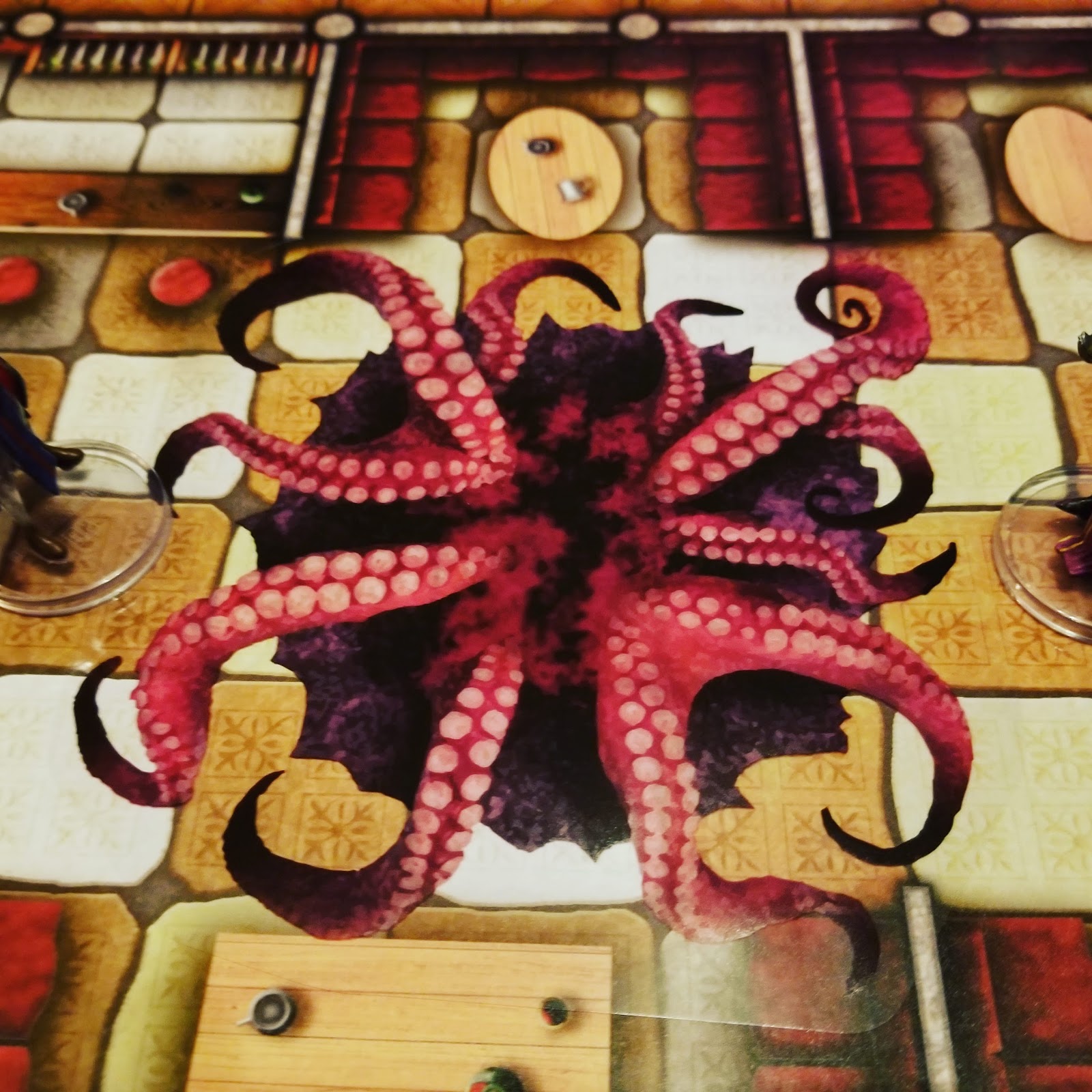 If you use a lot of grid combat in your games, Loke Battlemats are an excellent way to build a flexible collection quickly and cheaply. Even if you don’t, having a book handy can inspire the Dungeon Master to think about an epic set piece combat that’s not tied to a specific storyline.

Miniatures provided by WizKids Games, Monster Fight Club and Wizards of the Coast.

I am a game designer with over 15 years worth of game credits and industry experience. My work includes licensed games based on worlds like Star Wars, Star Trek and Firefly, classic game worlds like Dungeons & Dragons and Shadowrun and my own creations like Camelot Trigger and Save Game. I play a wide variety of games as part of Theatre of the Mind Players and have been the guest of honor at several conventions. I live with my family in Wisconsin, born near the heart of RPGs (and just a few short years younger than they are).
A

I like these as well. Many also come in hexes for players of GURPS and other games which is always nice too.

Whick Loke Battle at has the helicopter landing pad? The Cyberpunk one?

I do not recognize it. Must open my Cyberpunk to confirm.

I really, really hate the term "theater of the mind" for "combat without battlemaps.".

Combat with battlemaps is still "theater of the mind"! Unless you've never actually played a video game with combat animations, you recognize that you're still using tremendous amounts of imagination during your RPG combats. Battlemaps don't take them out of the mind; they provide you with an additional visualization tool to help make sure that everybody is imagining things close enough to each other that it's consistent for game purposes.

Whick Loke Battle at has the helicopter landing pad? The Cyberpunk one?
Click to expand...

They will shortly be doing a third Kickstarter, for a paired set of books to cover wilderness maps in the same way as the Dungeon and Towns book sets work.

This is cool. I could get a lot of gaming miles out of one or two of the spiral bound battle mats.

I got the Dungeon and now Taverns and Towns, they look fantastic. Only problem we in the U.S. are locked down hopefully I will get to use these mats when the Covid Crisis is over.

I don't do physical maps any more (even before COVID I did a VTT for everything, though not always remotely), so I know them mostly from their digital products. Some of them are very nice. Some, at the other end, are basically just background textures. I didn't buy any of them for a while because they were, bluntly, overpriced (the background-texture ones especially so). These days they've started selling them in bundles which are often much more reasonably priced collectively (and where if you're getting a few just-a-background you don't care).

The one other complaint I have (and this applies even more to the otherwise excellent Dramascape maps) is they tend to be relatively small area, which can be a problem on occasion.

Man in the Funny Hat

rknop said:
As an aside:

I really, really hate the term "theater of the mind" for "combat without battlemaps.".

Combat with battlemaps is still "theater of the mind"! Unless you've never actually played a video game with combat animations, you recognize that you're still using tremendous amounts of imagination during your RPG combats. Battlemaps don't take them out of the mind; they provide you with an additional visualization tool to help make sure that everybody is imagining things close enough to each other that it's consistent for game purposes.

I think your issue is simply that you're not aware of where the phrase, "Theater of the mind," comes from. It comes down to us from old radio dramas, describing how radio must do things with only sound and verbal description that normal theater can do in more straight-forward ways. Radio obviously has no visible physical sets, no props, no lighting, and physical movements and expressions of actors are absent. Radio either audibly and by verbal description sets a scene and explains actions and events that would otherwise be visually apparent, or relies on listeners to fill-in-the-blanks from their own imagination. To use the phrase then in connection with RPG's means to play RPG's without physical sets (no combat grids or battlemats), props (no miniatures or 3d scenery elements), lighting, or physical movements and expressions of the players. Well, maybe you can dim the lights in the room when PC's enter a dungeon or if an encounter takes place at night, and obviously the players can use facial expression and VERY limited movement to convey what their characters are doing, but it's not at all the same as actually ACTING the adventure on a stage.

Using the phrase in reference to RPG's was never intended to suggest that it meant imagination was turned off when battlemats, miniatures, terrain pieces, or other visual aids were in use. It means what it originally meant - that creating an entertaining drama (or playing an rpg) didn't REQUIRE those things, and it was possible to play without them using only "theater of the mind" - as is necessary in radio dramas. But when you use minis, mats, etc. then you AREN'T actually playing by "theater of the mind" as that term has always been defined.

I have the sci-fi one. Very good product. I'll acquire other books over time.

The Wilderness books are Kickstarting on the 11th of February. Loke have shared a link to register for the launch if you want to be kept informed.