D&D 5E Line or Cone, why aren't there any breath weapons with a Burst Area of Effect?

If you're flying and aim a cone effect downwards at the ground, it produces a circular area of effect.

Most conceptions of breath weapons are more as flamethrowers than grenades.

Voadam said:
Most conceptions of breath weapons are more as flamethrowers than grenades.
Click to expand...

Wasn't the Green Dragon's breath a cloud, back in the day?

Corinnguard said:
I haven't seen any breath weapons with a burst area of effect.
Click to expand...


This is your excuse to create a cool monster with such a breath weapon!

Quartz said:
This is your excuse to create a cool monster with such a breath weapon!
Click to expand...

"As you top the rise, you see before you a Fireball Dragon!" See how many players think of an excuse to end the session there and then.

Check out the solar dragon in the new Spelljammer release. Its photonic breath is basically "I spit a fireball that explodes where it hits" (well, radiant ball).

the Jester said:
Check out the solar dragon in the new Spelljammer release. Its photonic breath is basically "I spit a fireball that explodes where it hits" (well, radiant ball).
Click to expand...

Devs see the dragon as origin of effect, so maybe 20ft radius burst centered on the dragon could work.


Interesting. Historically Green Dragons were considered to have a breath weapon that was basically a burst area of effect. What does the breath of a 5e green look like now?

Quartz said:
This is your excuse to create a cool monster with such a breath weapon!
Click to expand...

Voadam said:
Most conceptions of breath weapons are more as flamethrowers than grenades.
Click to expand...

True. A breath weapon that does a burst area of effect is more akin to a dragon or dragonborn spitting a portion of it at someone instead of the whole thing.

pemerton said:
Wasn't the Green Dragon's breath a cloud, back in the day?
Click to expand...

When I first read this, I thought you were referring to R. Dragon in the books by Rosemary Manning. 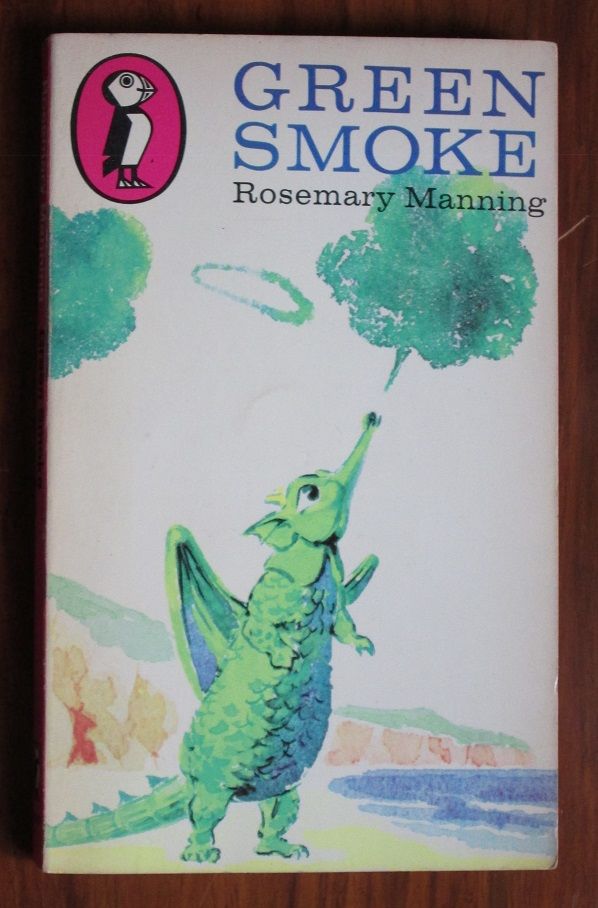 pemerton said:
Wasn't the Green Dragon's breath a cloud, back in the day?
Click to expand...

In Moldvay Basic (B/X) a Green Dragon's and one of the Gold Dragon's breath weapons was gas in a cloud shape, but it had to be directly in front of the dragon, not a ranged burst. Also while it was described as a cloud its dimensions are actually rectangular instead of round. It does not specify whether the cloud is rectangular or these are the far points of ellipsis dimensions and the corners are curved. 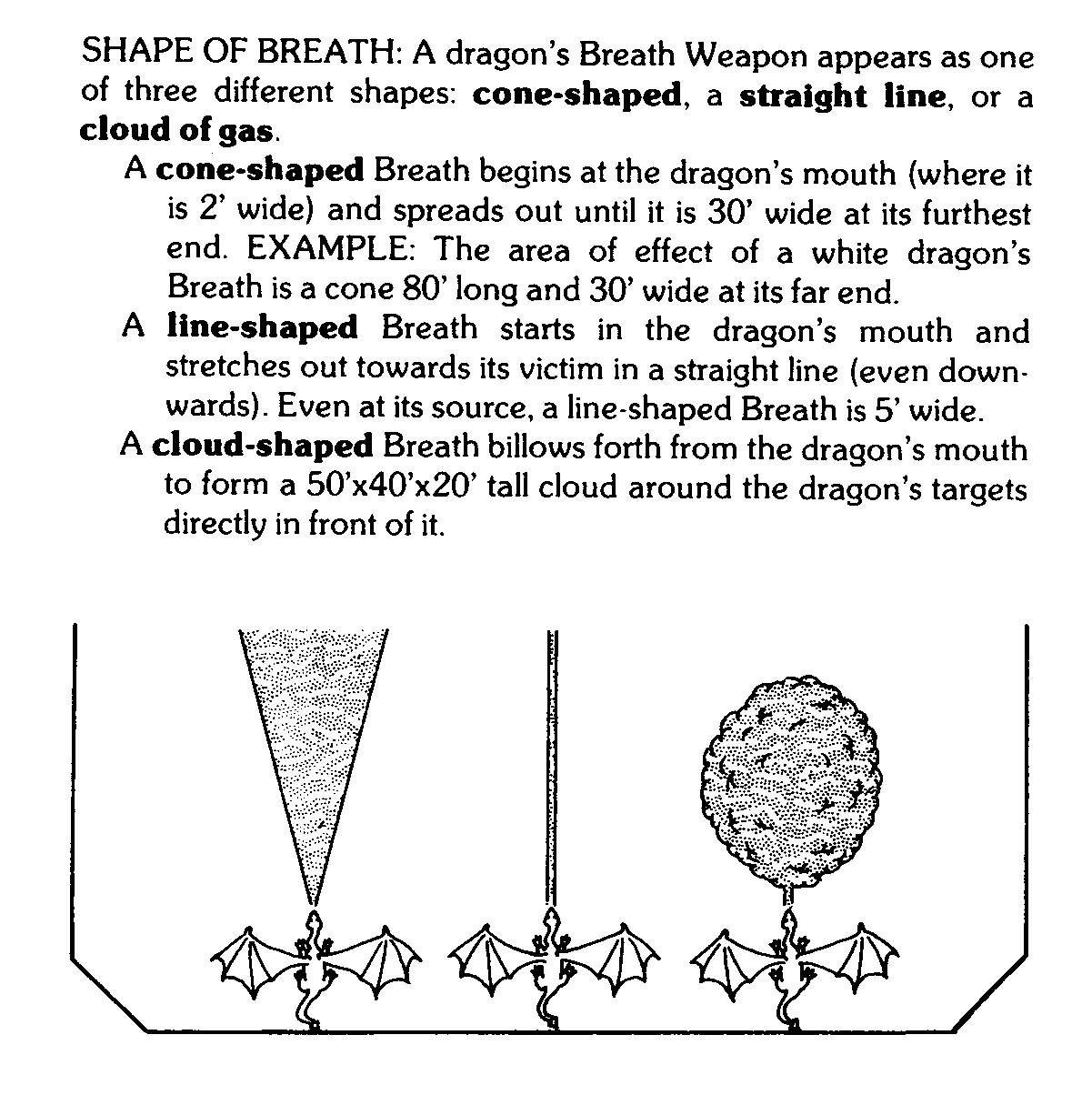 1e MM page 33:
A green dragon can attack by a claw/claw/bite routine or by breathing a cloud of poisonous chlorine gas. The gas cloud is 5” long, 4” wide, and 3” high.

3e discarded the cloud shape for just lines and cones.

I could see acid or poison dragons causing a burst, a glob of liquid splashing in a circular area effect.


Hmmmm... I guess I just ignored that and continued to assume a cloud shape for the green without even realizing it.

Celebrim said:
Hmmmm... I guess I just ignored that and continued to assume a cloud shape for the green without even realizing it.
Click to expand...

3e took away the the cloud and turned the green's chlorine gas into acid.

"Breath Weapon (Su): A green dragon has one type of breath weapon, a cone of corrosive (acid) gas."

Explosive Crystal (Costs 3 actions): The dragon spits an amethyst that explodes at a point it can see within 60 feet of it. Each creature within a 20-foot radius sphere centered on that point must succeed on a DC 23 Dexterity saving throw or take 18 (4d8) force damage and be knocked prone.

Outside of 5e, the only dragons who have a burst breath weapon are the drakes from 1st edition Pathfinder. Here's the Sea Drake's:

A sea drake can, as a standard action, breathe a ball of electricity that strikes one target first, then arcs to other targets like chain lightning. This attack has a range of 100 feet, and deals 6d6 points of electricity damage (DC 17 Reflex half) to the primary target. After it strikes, the ball lightning can arc to a number of secondary targets equal to the sea drake’s Hit Dice (usually 7) within 20 feet of the primary target. The secondary bolts each strike one target and deal as much damage as the primary bolt. Once a sea drake has used its ball lightning breath, it cannot do so again for 1d6 rounds. The Reflex save is Constitution-based.

Back in the day, 1-2e, some gem dragons would spit a crystal that would burst into some damaging form upon impact.

The old editions had dragons with spells like fireball to make up for this. It certainly can be a homebrew thing, almost like a manticore tail spikes where it spits globs of fire or acid dealing some damage. Might be cool for a smaller dragon and then have it grow into a bigger fireball.

If you're going to specialize any monster, specializ your dragons.

In my game, beyond specializing each dragon with unique abilities, spells, and other features, I allow the dragons to be extremely talented with their breath weapons. I allow them to use them in straffing runs when they fly which allows them to alter the shape of their breath weapon. A line can be a narrow cone, a cone can be made into a circular area. etc... I picture the dragon flying, and then allow the mental picture of what the dragon is doing and the mental picture of the breath weapon combine to create the inspiration for the game mechanics.

Apr 28, 2022
JEB
J
C
D&D 5E Do the effects of the Haste Spell stack with the Fighter's Action Surge feature?

D&D 5E Is this encounter too difficult?
2