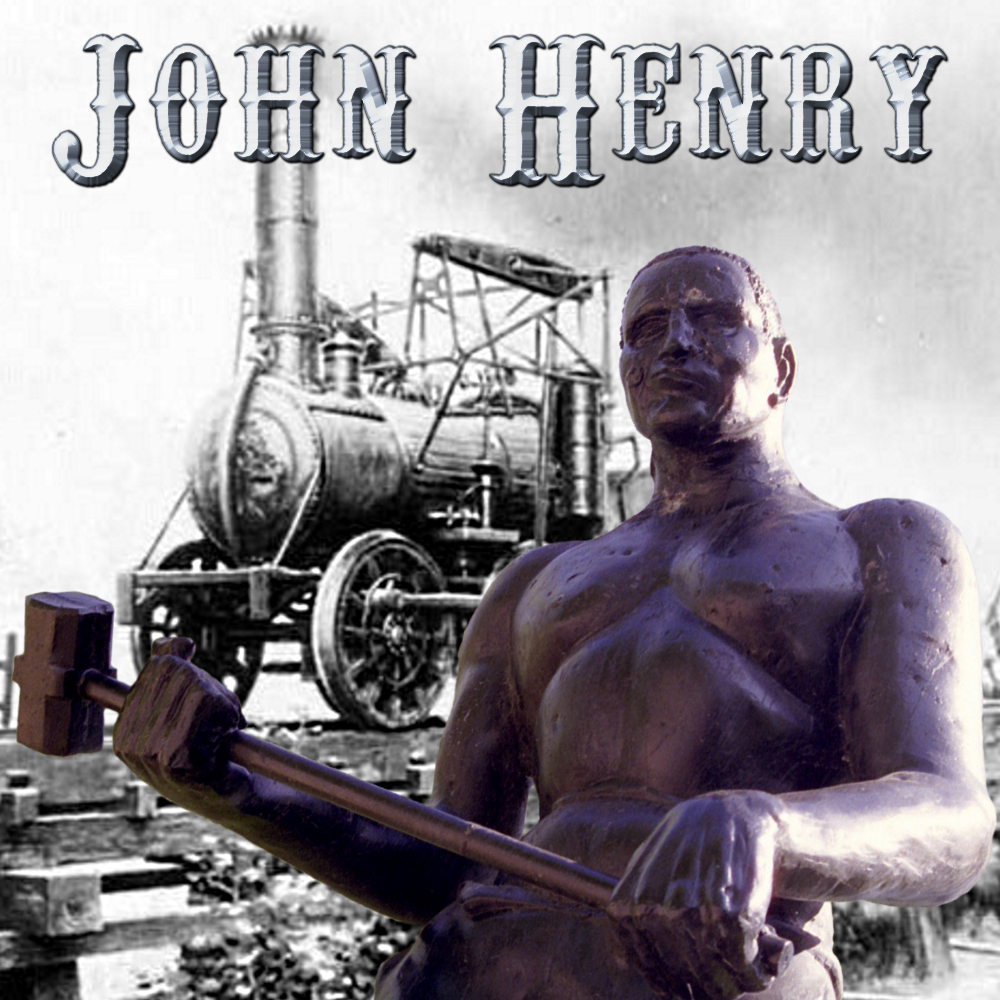 While there’s a lot of contention about where it happened (ranging from West Virginia to Virginia or Alabama, and even Jamaica), there’s not much argument about what happened. An industrialist (or inventor or salesman--it’s another contention in the folk tale) arrives with a steam-powered drilling machine he claimed could outperform any man so it fell to John Henry to prove him wrong. For a day and a half the two contestants--one man, one machine--drove countless spikes before finally the machine failed. Unfortunately John Henry died soon after, his heart giving out from the stress.

Design Notes: John Henry is essentially a badass with a hammer--the baddest of the badass hammer-wielders at that. He’s got a great position to resist exhaustion (six rerolls), he hits like a tank, and he can attack rapidly, plus the bonus against death saves. Unfortunately he has no armor and no good reason for barbarian levels so his CR is a little low (Blog of Holding rubric at 11.45, DMG chart at 14 so I settled on 13). If you give him some decent armor his challenge rating is going to jump up by at least 2-3.

Background: Yeoman. John Henry is always able to rely on the hospitality of commoners to help him hide or rest provided he poses no danger in doing so, going so far as to shield him from being discovered (though not at the cost of their lives).

Action Surge (2/Short Rest). Once on his turn, John Henry can take an additional action on top of his regular action and a possible bonus action.

Brutal Toughness. John Henry gains a +1d6 bonus to saving throws and death saves (treating final results of 20 or higher on a death saving throw as a natural 20).

Feat: Hammer Mastery. When John Henry has advantage on a weapon attack roll using his maul, on a successful hit as long as both dice have a result that beat the target’s AC it is knocked prone. When John Henry misses on an attack roll with disadvantage but would have hit on the higher result, the target takes 5 bludgeoning damage. In addition, when he uses the Help action to aid an ally making a melee weapon attack, the ally both gains advantage and if their target is making use of a shield the ally also gains a +2 bonus to the attack roll.

Fighting Style: Great Weapon Fighting. When John Henry rolls a 1 or 2 on a damage die for an attack he makes with a melee weapon that he is wielding with two hands, he can reroll the die and must use the new roll, even if the new roll is a 1 or a 2. The weapon must have the two-handed or versatile property for John Henry to gain this benefit.

Indomitable (3/Long Rest). John Henry can reroll a saving throw that he fails but must use the new roll.

Second Wind (1/Short Rest). On his turn, John Henry can use a bonus action to regain 1d10+20 hit points.

love the build. the only thing i would do different is switch his strength and constitution. he had to out last a machine. that is a feat of constitution.

ha - this is great. I grew up near Ronceverte, West Virginia where John's tunnel is - the statue in your photo is in a turnout at the roadside above the tunnel. My uncle authored a booklet about John Henry - one of our ancestors worked with John in the tunnel. I love John Henry - he's a representative of all of humanity. Rage against the machine!

It would have been funny to make him a half-orc that passed as fully human.

John Henry told the captain, "I ain't nothing but a man..."

What are Brutal Criticals and Brutal Toughness based on? I don't remember these.

I'm normally ambivalent towards "hero builds", but I've always loved John Henry since I was in Kindergarten in Pacoima (California). Not sure why, but it the story just kinda 'clicked' with me. Probably the whole "poor guy fights rich industrialists" (yeah, we were poor; I was the "token white kid" living in the area...never had a single friend who was white until I was almost 10 years old and living here in the Yukon, Canada;er, wait, my very first 'kiss' was about age 7 with a blue eyed blond hair girl named... brace yourself..."Candy"...yeah... good times, good times... Don't think she counts as a 'friend' though).

Anyway, John Henry. Great song done by The Man In Black; you can find it on Youtube.

A collection of totem barb features (I like eagle, bear, wolf, in that order) would be pretty solid as an alternative. Think a black man in the 1800s whose job was being threatened by a machine would have had plenty of reason to RAGE.

One of my favorite American Mythical Figures!

dave2008 said:
What are Brutal Criticals and Brutal Toughness based on? I don't remember these.
Click to expand...

Hrm. I thought I'd been pretty thuggish about naming those, too (https://media.wizards.com/2018/dnd/downloads/UA-3Subclasses0108.pdf)

Mike Myler said:
Hrm. I thought I'd been pretty thuggish about naming those, too (https://media.wizards.com/2018/dnd/downloads/UA-3Subclasses0108.pdf)
Click to expand...

Polyhedral Columbia said:
ha - this is great. I grew up near Ronceverte, West Virginia where John's tunnel is - the statue in your photo is in a turnout at the roadside above the tunnel. My uncle authored a booklet about John Henry - one of our ancestors worked with John in the tunnel. I love John Henry - he's a representative of all of humanity. Rage against the machine!
Click to expand...

I’m from West Virginia too. Glad to see another of us playing the game!!!

Feat: Hammer Mastery makes me wish he had 2 Barbarian levels for Reckless Attack.

It also makes me wish Fell Handed had a published version.